Part 9 of a Series on Evaluation of Scientific Publications

Background: The findings of epidemiological studies, diagnostic tests, and comparative therapeutic trials are often presented in 2 × 2 tables. These must be interpreted correctly for a proper understanding of the findings.
Methods: The authors present basic statistical concepts required for the analysis of nominal data, referring to -standard works in statistics.
Results: The relative risk and odds ratio are defined to be indices for the relationship between two binary quantities (e.g., exposure—yes/no and disease—yes/no). The topics dealt with in this article include the effect of sample size on the length of the confidence interval and the p-value, and also inaccuracies caused by measuring error.
Exposures are often expressed on a three-level scale (none, low, high). The authors also consider the 2×3 table as an extension of the 2 × 2 table and discuss the categorization of continuous measurements. Typically, more than one factor is involved in the development of a disease.
The effect that a further factor can have on the observed relationship between the exposure and the disease is -discussed.
Conclusions: Sample size, measurement error, categorization, and confounders influence the statistical interpretation of 2 × 2 tables in many ways. Readers of scientific publications should know the inherent problems in the interpretation of simple 2×2 tables and check that the authors have taken these into account adequately in analyzing and interpreting their data.
Key words: publications, clinical research, epidemiology, statistics, clinical trial

The results of epidemiological studies, diagnostic test procedures and therapeutic comparisons are often presented as 2 x 2 tables. The terms four-field table, contingency table, and cross table are also often used. For example, the British Medical Journal recently published a case control study in which the association between tea consumption and esophageal carcinoma was examined (1). Of the 300 patients with esophageal carcinoma (“cases”), 249 reported that they never, or very rarely, drank green tea; 17 (6.4%) frequently drank green tea. Of the 571 study participants without esophageal carcinoma (“controls”), 356 reported that they rarely drank green tea, in comparison with 30 subjects with regular consumption. The findings were presented in a 2 x 2 table (1). It is remarkable that some of the participants provided no information (missing data). As a second example, let us consider a clinical study with patients with metastatic breast cancer, in which factors investigated included the influence of the prior therapy (2). All patients had received taxanes. Progression was detected in 10 (28.6%) of the 35 patients with prior anthracycline treatment. There was a greater rate of progression (15 out of 26; 57.7%) in the group without prior anthracycline treatment. In the case control study, an alternative classification could be selected for tea consumption, for example “never,” “moderate,” or “frequent”. In the therapeutic study, the tumor response is often classified as “complete remission,” “partial remission,” or “no change or progression”.

The relative risk (RR) or the odds ratio (OR) can be calculated from the simple 2 x 2 table. This is why it is important to understand the central properties of the 2 x 2 table and to know how even simple extensions can change the analysis and interpretation. If this is overlooked, wrong conclusions may be drawn, leading to mistaken assessment of the risk, diagnosis, prognosis, or therapy for the individual patient.

Typically, more than one factor is involved in the development of a disease. For this reason, the analysis should consider more than one potential factor in most situations. For example, not only the type and temperature of the tea should be considered, but also coffee and alcohol consumption. Simple contingency tables are then no longer adequate for the analyses and presentation of the results. The evaluations must be performed with multivariate models, which simultaneously consider several variables.

In the following sections, we will employ the notation of the 2 x 2 table (see Box gif ppt) and discuss the results of a hypothetical study (Table 1 gif ppt). We will define the terms risk, relative risk, and odds ratio and discuss the influence of the sample size on the length of the confidence interval and on the p-value. We will also explain how measurement errors can lead to bias in the result. As a simple extension, we will then consider the 2 x 3 table and explain how an additional factor can affect the observed correlation between exposure and disease. We will use the term “risk factor,” taken from epidemiology. The same considerations apply analogously to diagnosis, prognosis, and therapy. Sauerbrei and Schumacher (1999) (3) have discussed additional aspects relevant to prognosis studies. For further information, we refer the reader to Fletcher et al. (2005) (4), Altman (1991) (5), Campbell et al. (2007) (6), and Schumacher and Schulgen (2008) (7).

Definitions
Let us consider a group of n persons. We are interested in the following two properties:

The word “exposed” is used here to represent various characteristics, such as people exposed to a specific occupational stress, persons with a specific genetic constellation, or persons with values outside the normal range for specific laboratory parameters. In the example above, this means individuals who “frequently” drink green tea. In therapeutic studies, “exposed” can be replaced by “therapy A,” “not exposed” by “therapy B,” “ill” by “no therapeutic success,” and “not ill” by “therapeutic success”.

The incidence rate, risk, relative risk and odds ratio are derived from the 2 x 2 table (Box).

Aside from the relative risk, the so-called odds ratio (OR) is often used as a measure of association (Box). The odds ratio is the quotient of the chances (odds) of a disease (cure) for persons with or without exposure (therapy).

Problem 3: Exposure in more than two steps
In the above case control study, the frequency of tea consumption was classified into three groups (never moderate, frequent) (1). We will extend our contingency table to a 2 x 3 table, with the exposure in three categories (Table 4 gif ppt). The risk of the high exposure group relative to non-exposed persons was 2.8 and relative to the low exposure group was 2.0. The influence of the exposure on the disease is more marked than in Table 1. If, however, a 2 x 2 chi-square test is (wrongly) applied to a 2 x 3 table, the association is no longer significant. In the 2 x 2 table, a 2 x 2 chi-square test of independence has only one degree of freedom, whereas it has two degrees of freedom in the 2 x 3 table. For a fixed level of significance, the critical value is greater in the 2 x 3 table. However, with this procedure, the fact is ignored that the three degrees of exposure are sequential (absent, low, high). A suitable test of trend should consider this sequence. What is important is that the categories should be fixed prior to the evaluation, on the basis of objective and biometric arguments. Because of the problems with multiple testing, it is totally unacceptable to perform retrospective “searching” to attain a smaller p-value (and a “significant” result) (8).

Problem 4: Categorization of continuous variables
Although exposure is frequently measured as a continuous variable (i.e. a variable with many possible values, such as blood pressure), the evaluation is often based on categorical data (high, intermediate, low). There are many disadvantages in categorizing continuous variables by classifying class limits. Firstly, some of the originally recorded information is not used. This loss is at its greatest if there are low numbers of categories—for example, a threshold for the classification as “high” or “low.” Moreover, the number of suitable categories and their limits must be specified. If categories are chosen for which the number of cases is too low, the estimate of the effect for these categories is unstable. If target variables are considered when specifying the limits, this can lead to a marked overestimate of the effect and to false p-values. Altman et al. (1994) (9) have shown that there are a wide variety of problems associated with the popular “optimal” cut-off point approach, in which, depending on the data, different threshold values are examined for categorization as “high” or “low”. If many different cut-off points are considered, this greatly increases the error of the first type. In other words, a significant result is found, although the factor investigated does not in fact influence the target variable. Instead of the assumed probability of error of 5%, multiple application of tests leads to a probability of error of almost 50% (9).

With continuous risk factors, it is better to estimate the dose-effect curve, rather than to perform categorization (10).

Problem 5: Influence of a third factor
Confounding and Simpson’s paradox—In many studies, the influence of exposure on a disease is influenced by an additional factor (Figure gif ppt). We assume that the results given in Table 1 were recorded in a group of non-smokers. There are however also data for a second group (smokers) (Table 5 gif ppt). RR is greater than 1 in both groups, so that the disease is more frequent after exposure.

If these groups are not considered in the evaluation, and the figures for the two groups are simply added, an estimate is obtained for the relative risk which is less than 1. This phenomenon is known as Simpson’s paradox. The reason for this is that the distribution of exposure in the two groups is different, as is the risk of disease. Thus, addition of the tables is not justified. However, when evaluating studies with several important influencing factors, it is often not evident which factors should be considered in the analysis. The association (or correlation) between the different influencing factors may be important here. Variables are known as confounders if they are correlated with both exposure and disease. The classical procedure for dealing with categorical confounders is the so-called Mantel-Haenszel statistic, based on stratification of the data according to the confounder variables. The -Mantel-Haenszel statistic is a weighted mean of the odds ratios for the individual categories, with the weights depending on their sizes. It is evident that this procedure can become highly complex if there are several confounders. In particular, it may lead to some categories being occupied with only a few cases and controls. Then modelling must be performed with regression models. The logistic regression model has become the established approach in medicine for the simultaneous investigation of several factors influencing binary target variables.

Interaction—We have been assuming that the additional factor (here smoking) is not of primary interest, but influences the association between exposure and disease and must therefore be considered in the evaluation. It is however often the case that we are not only interested in the effects of the individual factors on the disease, but also their combined effect. It is often assumed in medical research that factors act multiplicatively. This means that if two or more factors are present, the relative risk is calculated as the product of the individual relative risks. If the result of the study is very different from the calculated product, there is an interaction between the factors. Minor deviations are always observed in real studies. A test for interaction can be used to investigate whether the deviations are random or statistically significant.

In the present example, the variable “smoking” is also of interest as second factor. If exposure E is not considered, the calculated RR for smokers is (60/150)/(36/450) = 5.0 (Table 6a gif ppt). Conversely, Table 5b shows that the RR for exposure is 0.83, if the smoking status is not considered. A multiplicative effect means that subjects who not only smoke but have also been exposed to E have an increased risk of 0.83 x 5.0 = 4.15, in comparison to non-smokers without exposure E.

Table 6b shows that the risk is in fact increased by the factor of (20/40)/(6/150) = 12.5. There is thus a deviation from multiplicativity, i.e., an interaction between the two factors. The other publications contain more detailed discussions of this topic and present suitable methods for investigating interactions (11–13).

Discussion
Every publication of a clinical or epidemiological study should contain a simple descriptive presentation of the results (14). In many cases, the 2 x 2 table is a sufficiently clear method to present the principle results. On the other hand, there are some catches in interpreting this apparently simple table. The reader of a scientific publication should be aware of these and make sure that the authors have drawn proper attention to possible problems. 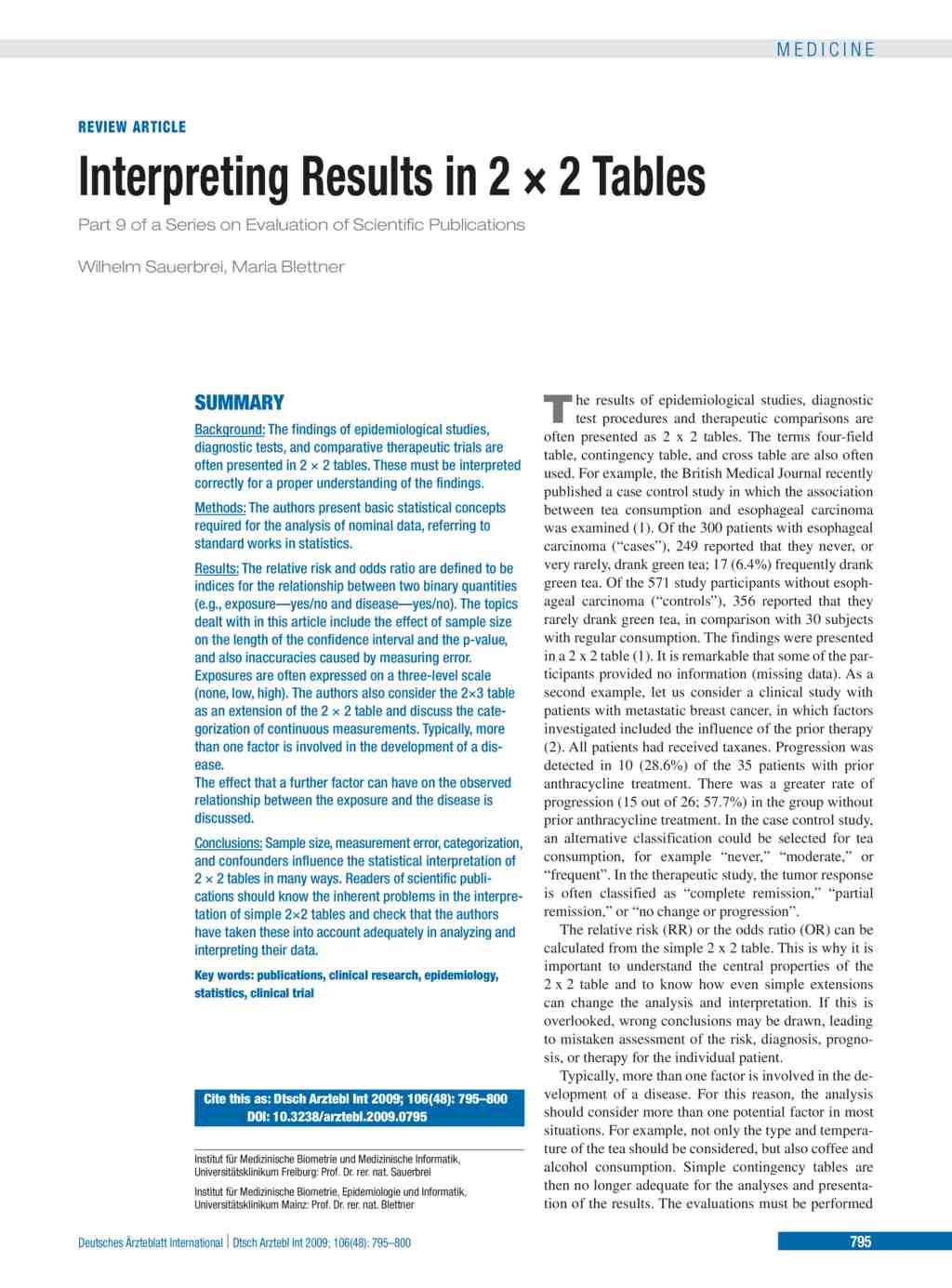