Hemoglobinopathies Are on the Increase

Dtsch Arztebl Int 2010; 107(5): 63-4. DOI: 10.3238/arztebl.2010.0063
An editorial to accompany the article “Hemoglobinopathies in Germany—A Longitudinal Study over Four Decades,” by Kohne and Kleihauer in this issue of Deutsches Ärzteblatt International

Though it is still politically controversial to call Germany an immigration country, the facts related by Kohne and Kleinhauer in their article (1) show that immigration to Germany has led, in recent years, to an increased prevalence of diseases once considered to be exotic. The article represents, in a sense, the scientific life’s work of these two authors, who have spent decades studying the physiology and human pathophysiology of altered hemoglobins. The Kleihauer test for the staining of erythrocytes with fetal hemoglobin is now a part of standard textbook knowledge and is still used for the detection and quantification of feto-maternal transfusion. By making feto-maternal transfusion detectable, this test provided the first rational basis for Rh prophylaxis in pregnant women.

Hemoglobin research
Scientific research on hemoglobins flourished in the 1950’s and 60’s, when the discovery of the three-dimensional structure of hemoglobin with x-ray crystallography helped explain the special physiological properties of this molecule (2). Max Perutz and John Kendrew were awarded the 1962 Nobel Prize for Chemistry in recognition of this discovery. Today, structural biology remains an active area of life science research, in which basically unaltered methods are used to analyze many medically important proteins and molecular machines.

In this context, the name Kleihauer is connected not just with the eponymous laboratory technique demonstrating fetal blood cells, but also with many path-breaking early studies on the structure and function of hemoglobin. These studies had wide implications for basic science and have revealed much about the clinical significance of hemoglobin diseases in Germany (3–6).

By establishing research structures closely connected to clinical work, Kleihauer became one of the pioneers of applied molecular biology in medicine and molecular medicine in Germany. The globin genes were a suitable subject for projects of this type and were, in fact, the first human genes to be isolated and to have their manner of regulation described (7). Many of the principles applied in this work are applicable to practically all other genes as well.

Hemoglobin diseases
Hemoglobin diseases were rare in Germany before immigrants began to arrive from the endemic areas of the world—the same areas to which malaria is, or was, endemic. As Kohne and Kleihauer show, these diseases are not rare in Germany any more. The figures reported here confirm the experience of pediatric hematologists: Patients with thalassemia and sickle-cell disease account for much of the clientele of any sizeable pediatric hematology unit. Their treatment consumes considerable resources.

Patients with thalassemia need lifelong, regularly scheduled transfusions. They also need cumbersome and stressful iron-elimination treatment and, in most cases, complex endocrinological management. If a suitable donor can be found, hematopoietic stem-cell transplantation should be performed (8).

Patients with sickle-cell disease suffer from a multi-organ disease that is mainly characterized by vaso-occlusive crises and chronic organ insufficiency. The anemia itself is usually the smallest problem (9). Despite these disease manifestations, optimized treatment protocols have improved the prognosis of affected children, so that they can now survive into adulthood. It follows that hemoglobin diseases are being seen with increasing frequency in adult internal medicine as well. As the article’s accompanying eFigure 2 shows, this is true throughout Germany, not just in the country’s largest cities.

Consequences of the presented data
One practical consequence is that hemoglobin diseases need to be on the physician’s diagnostic radar screen when a patient presents with difficult-to-explain hemolytic anemia or with microcytic erythrocyte indices. This statement holds not just for patients from endemic areas, but for all others as well.

This group of patients is still small, yet it is growing in size and poses highly complex challenges for medical care. Thus, effective treatment requires collaboration with experienced centers.

As these are severe diseases, prevention is important. Gynecologists certainly play a special role here. They can identify heterozygous carriers from their blood counts, then study their partners to determine the genetic risk of passing on these usually recessive illnesses to the next generation. Professional genetic counseling can lower the chance that children will be born with a chronic illness.

Neonate screening for sickle-cell disease can also be performed as a preventive measure in regions with a high incidence of this disease. It has been shown that the presymptomatic detection of sickle-cell disease can lead to a dramatic reduction of morbidity and mortality. In Germany, unlike some other European countries, this procedure is not yet established. 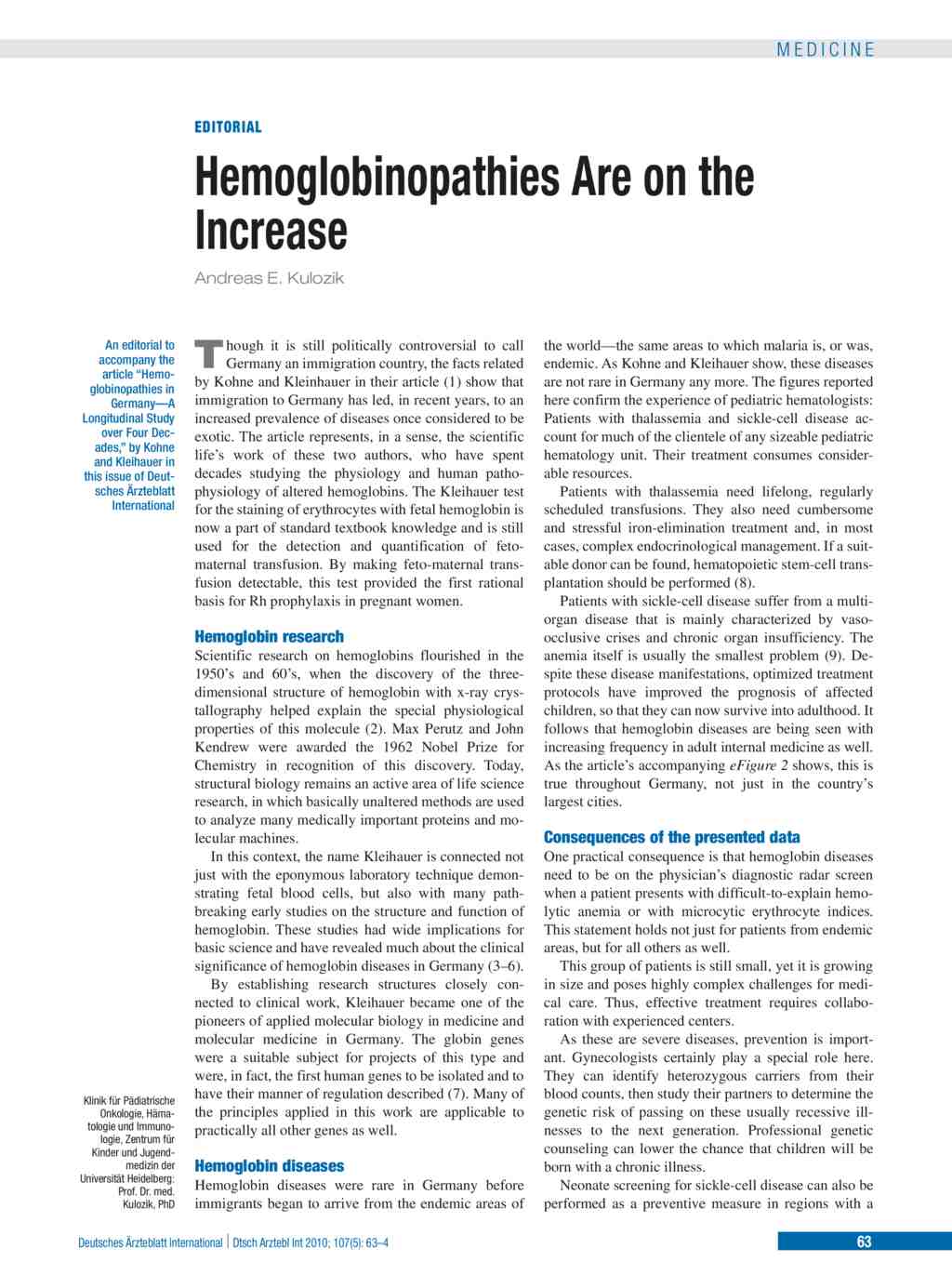