The number of letters underlines the importance of the topic for readers of Deutsches Ärzteblatt.

Several correspondents pointed out—entirely correctly—that infection with Mycobacterium avium intracellulare, the causative agent of avian tuberculosis, is not a typical from of TB in humans. By contrast to infection with M tuberculosis, no person to person spread exists, nor is the disease notifiable.

For the clinical course, however—and that is the crux of the matter here—no difference exists. Infection of humans with avian TB (M avium) is found almost exclusively in patients with HIV at a late stage of illness and affects mainly the lungs. The clinical presentation in the case report patient was therefore untypical for infection with M avium intracellulare. The patient was not HIV positive, and he did not have neoplastic disease, as Dr Kropp or Professor Dr Schulz assumed.

Because of the lacking clinical differentiation between tuberculosis and infection with M avium, the diagnosis of “tuberculosis of the bone” was chosen—among other reasons, to enable better understanding among non-specialist doctors. The diagnosis suggested by Dr Kropp—“disseminated non-tuberculous mycobacteriosis caused by Mycobacterium avium intracellulare complex”—in an atypical case would have created more confusion than understanding. Since the differentiation and treatment decision is always made only after the causative strain has been identified, I do not see the clinical diagnosis of “tuberculosis of the bone” as erroneous or even incorrect in this case, rather in contrast to Dr Schneider. The diagnosis could certainly have been made earlier if the examination had been thorough enough. The specimen taken in the first diagnostic puncture was sent to a pathology laboratory for suspected malignancy, not to a microbiological lab. The process took the wrong direction right from the outset because the wrong clinical -diagnosis had been made.

As Dr Heinrich and Dr Birkenmaier correctly state, the diagnosis could have been made earlier by using PCR and cultures—had these but been considered. Dr Hauer’s mention of the interferon-gamma-release assay (IGRA), which is now available, is an important addition.

Although antibiograms are now done routinely in tuberculosis, their reliability for other mycobacteria is not undisputed. Back then, eight years ago, when much of the current knowledge into M avium did not exist, therapy and its duration were decided on the basis of the causative strain.

All the literature citations mentioned in the readers’ correspondence were published much later, at a time when more was known about this infection as an opportunistic infection in HIV patients. But even such new insights can protect patients only if the initial diagnosis is correct.

Dr Fischer rightly points out that, on the basis of the histology results alone, without further disease markers or molecular genetic confirmation, a diagnosis of ALL should have not been made under any circumstances, not should the patient have been subjected to chemotherapy, an invasive form of treatment.

My thanks go to Professor Schilling for pointing out the risk of confusion with CRMO (chronic recurrent multifocal osteomyelitis), which is possible because of lymphocellular infiltration and paravertebral soft tissue inflammation. Because of the clinical course, this initial differential diagnosis became increasingly unlikely, since CRMO does not affect the skull and is not accompanied by psoas abscesses. However, the illness of the patient in this case report bore a merely temporary resemblance to CRMO, which is also characterized by a lengthy process until the correct diagnosis is made.
DOI: 10.3238/arztebl.2010.0149b

Conflict of interest statement
The authors of all contributions declare that no conflict of interest exists according to the guidelines of the International Committee of Medical Journal Editors.
1.
Herzog A: Case report: dangerous errors in the diagnosis and treatment of bony tuberculosis [Gefährliche Fehler in Diagnostik und Therapie einer Knochentuberkulose]. Dtsch Arztebl Int 2009; 106(36): 573–7. VOLLTEXT
In reply 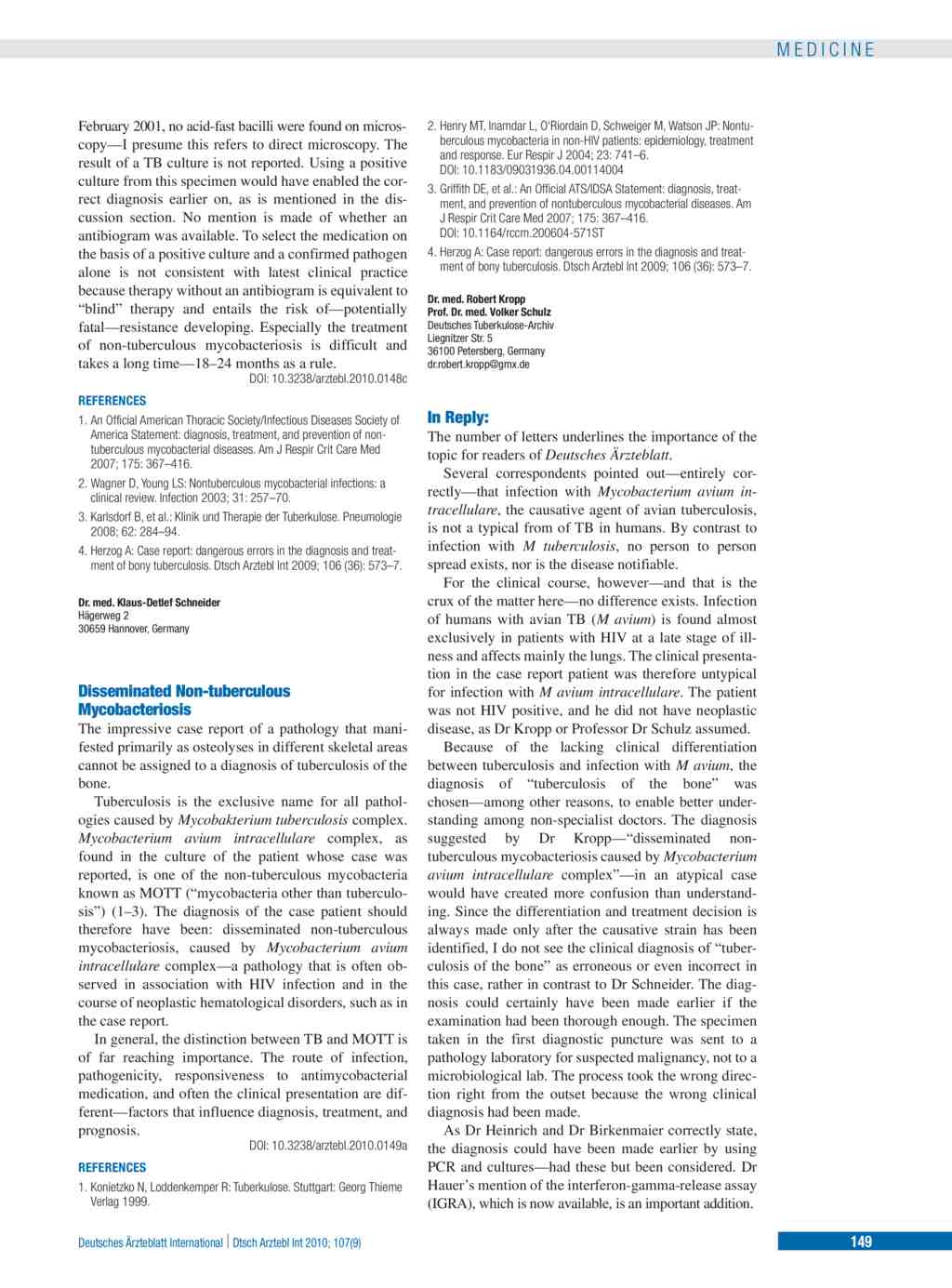