Part 11 of a Series on Evaluation of Scientific Publications

Introduction: An important objective of epidemiological research is to identify risk factors for disease. Depending on the particular question being asked, cohort studies, case-control studies, or cross-sectional studies are conducted.
Methods: Methods of data analysis in different types of epidemiological studies are illustrated through examples with fictive data. Important measures of frequency and effect will be introduced. Different regression models will be presented as examples of complex analytical methods.
Results: Important frequency measures in cohort studies are incidence and mortality. Important effect measures such as the relative risk (RR), hazard ratio (HR), standardized incidence ratio (SIR), standardized mortality ratio (SMR), and odds ratio (OR) can also be calculated. In case-control or cross-sectional studies, the OR can be calculated as an effect measure. In cross-sectional studies, prevalence is the most important frequency measure. The interpretation of different frequency measures and effect measures will be discussed.
Conclusion: The measures to be calculated and the analyses to be performed in an epidemiological study depend on the research questions being asked, the study type, and the available data.

Epidemiology is used to describe the distribution of diseases in the population and to analyze the causes of these diseases. One important objective is to identify risk factors and to quantify their significance. A risk factor can influence the probability that a specific disease develops. Risk factors include:

Epidemiological research employs various different types of study (1–3), depending on the question asked. The most important are

In cohort studies, persons exposed to specific risk factors are compared with persons not exposed to these factors. The occurrence of diseases or deaths in these two groups is observed prospectively. Data from cohort studies allow the estimation of incidence rate and mortality rate as descriptive measures of frequency, as well as relative risk (RR) or hazard ratio (HR) as comparative effect measures. Standardized incidence ratios (SIR) or standardized mortality ratios (SMR) are used for comparison with the general population.

In case-control studies, persons suffering from the studied disease are compared with controls who do not have the disease. Exposure is recorded retrospectively. The odds ratio (OR) is calculated as a comparative effect measure.

In cross-sectional studies, the exposure and disease status are examined for a sample from a defined population at the same time point. The prevalence of various diseases and the risk factors, as well as the OR can be determined.

Effect estimates, such as RR, are normally calculated with regression models, taking influencing factors into consideration. These lead to statements about the extent of changes in the frequency of a disease due to a specific risk factor. To assess whether the observed effect is statistically significant, the confidence interval (CI) should, for example, be considered for all effect estimates (4). If a statement is to be made about the number of cases of the disease caused by the risk factor, then the risk difference (RD) is considered.

Material and Methods
Studies on the link between hormone replacement therapy (HRT) and breast cancer will be used to illustrate the difference in analysis of the different study types. Various articles and textbooks can be recommended for more advanced reading (3, 5–10).

Whatever the study design, the study population should first be described (description) (11). For example, age can be given as the mean value and standard deviation (for normal distribution), or as the median and range, or in a histogram. Studies on breast cancer and HRT normally also examine influence factors such as menopausal status, family history, marital status and education. These variables should be included in the analysis, as they may be risk factors for breast cancer and are potential confounders (12). Risk factors may also be effect modifiers. Effect modification means that the influence of one factor (for example, HRT) on a disease (for example, breast cancer) is modified by the presence of another factor (for example, smoking). In other words, there is an interaction between the two factors. The effects should be examined in different subgroups (stratification), each with the same analysis.

An analysis plan must be prepared when the study is being planned and this must include a detailed description of the study design and the planned data analysis.

Example: cohort study
Between 1996 and 2001, the Million Women Study in Great Britain included 828 923 postmenopausal women aged between 50 to 64 years and without breast cancer (13). The occurrence of breast cancer in this group was then monitored with the help of the Cancer Registry (follow-up).

The incidence rate considers the period in which each individual was in fact at risk of developing breast cancer and could be monitored. This period is designated as person-years (the years which the study participants contribute to the cohort study) and added up for the whole group examined. Not all women were at risk of developing breast cancer throughout the period of the study. One reason might be that they had already died from other causes before the end of the study. If each participant can be followed throughout the period of the study, the incidence rate is the same as the cumulative incidence.

Regression models—Comparison between the users and non-users of HRT is only permissible if there is no difference between these groups, except with respect to exposure. This means that these two groups should be equivalent with respect to other factors relevant to breast cancer, such as age.

In a Cox regression, the target parameter is the time until the occurrence of an event (for example, disease or death). The data are censored, meaning that not all participants could be observed throughout the entire study duration. Cox regression uses a proportional hazard model to calculate the hazard ratio (HR). The underlying assumption is that the risk in the two groups differs by a specific factor. The interpretation of HR and RR is similar. The Million Women Study considered not only HRT intake, but also other factors, such as age.

If an effect modification (interaction) is examined, this interaction is considered in the regression model (interaction term). This approach can be used to reveal interactions between different factors (10).

Poisson regression is used if the target parameter is the number of observations of a rare event, for example, the number of breast cancer cases within a defined period.

Logistic regression models can also be used in cohort studies (see below).

Example: case-control study
As part of a large study by the WHO, a case-control study was performed in Switzerland on the influence of HRT intake on the development of breast cancer (17). Between 1990 and 1995, 230 breast cancer patients and 507 controls (patients with other diagnoses) aged between 24 and 75 years were enrolled in this study at Lausanne University Hospital and asked about their intake of HRT.

For the binary target variable of a case-control study (disease yes/no), logistic regression is the best suited statistical model to estimate OR (Figure, Table 2). In this example, a multivariate model was used to consider additional potential risk factors for breast cancer (17).

It is not possible to calculate RR in a case-control study, as no incidence can be calculated (14). OR can be interpreted as RR, if the disease is rare.

Interpretation of estimates and confidence intervals
The various effect estimates described above state the extent of change in the frequency of a disease due to a specific risk factor. A value of 1 means that exposed persons have the same risk of falling ill as non-exposed persons. If the value is above 1, this means that this risk factor increases the frequency of the disease. If the value is less than 1, the factor is considered to be protective. In other words, this factor reduces the risk of disease. The confidence intervals (CI) and p-values need to be considered for all effect estimates, to help assess whether the observed effects are statistically significant (4).

If a statement is to be made about the number of cases of the disease caused by a risk factor, the risk difference (RD) is calculated. If the RD is 0, this means that there is no difference between exposed and non-exposed persons.

Results
Cohort study
Incidence—In the cohort study, 7140 of 828 923 postmenopausal women developed breast cancer within the observation period of six years (13). This corresponds to a cumulative incidence for this period of 861 per 100 000, or an average of 144 per 100 000 per year (Figure).

Relative risk (RR) and risk difference (RD)—The calculation of the crude (unadjusted) RR is shown in the Figure. As the crude RR does not permit final conclusions, data analysis normally presents adjusted estimates from multiple regression models (see below).

Standardized incidence ratio (SIR) and standardized mortality ratio (SMR)—SIR and SMR were not calculated in the Million Women Study. For this reason, the following parameters are used to explain these estimates (Table 1a/b):

For the calculation of the SMR, it was assumed that 780 exposed women died of breast cancer within the period of 2.6 years, giving an SMR of 1.25. This is interpreted analogously to SIR.

Case-control study
Calculation of an unadjusted OR is described in the Figure. As, however, an unadjusted OR does not allow final conclusions, the publication on this study only presents the adjusted OR (17). The OR was adjusted for further potential risk factors and protective factors for breast cancer, using a logistic regression model, yielding an OR of 1.2 (95% CI: 0.8–1.8). Although this is increased, it is not statistically significant.

In cohort studies, the RR makes a statement about the extent of the change in the probability of developing the disease due to a defined risk factor. Taken together with the confidence interval, the RR shows the relevance of the risk factor for the disease. The OR is only an approximation of RR for rare diseases. The RD depends on the frequency of the disease. In this way, statements can be made about the number of cases of a disease caused by a defined risk factor. RR and RD must be evaluated very differently when communicating risks.

These methods can also be used in clinical epidemiology. These may investigate specific interventions, i.e., therapies or diagnostic procedures, as influence factors. In cohort, case-control and cross-sectional studies, the influencing factors are only observed, without any intervention taking place. Nevertheless, the statistical analysis is similar.

Whatever the study type, study planning and procedure must always avoid the various forms of bias, such as systematic errors (for example, selection of study population) and confounding factors (12). If this is not successful, these problems must be considered during data analysis, if possible. Moreover, possible interactions (effect modifications) are examined.

Detailed planning must be performed ahead of time and an analytical protocol laid down in writing in advance. These are important requirements if the study is to provide adequate answers to the questions being asked. 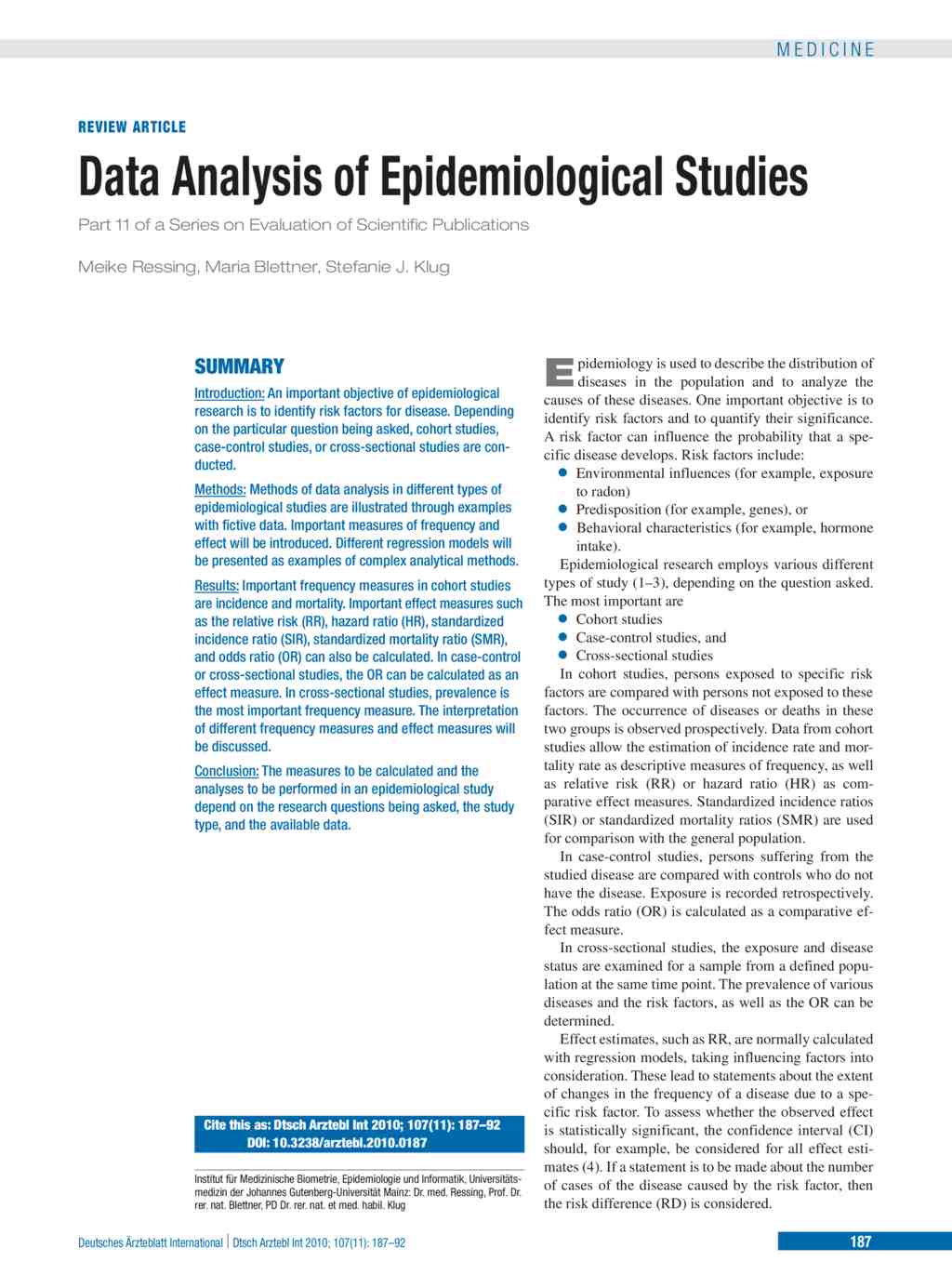