Vogeser sees a problem in the periods of follow-up. In most of the studies included in our analysis, the periods of follow-up were between 5 and 10 years Vogeser writes that “The influence of overweight ….can certainly not be reliably evaluated on the basis of such data”. It is generally true that causal relationships can be established by cohort analyses only to a limited extent. Observational studies do only permit statements about correlations. Our article addressed the question of whether morbidity and mortality are correlated with the BMI and not whether they are caused by it. The question as to whether periods of follow-up are appropriate is complex. Aside from the period of follow-up, the number of observed persons and the exposure parameter are of decisive importance. With large cohorts, periods of follow-up may be shorter. For example, if it were possible to observe the whole population of Germany, a few months would presumably be enough to identify associations. This is the case for the exposure parameter BMI, as BMI values are stable even over relatively long periods. Thus, we can assume that subjects who are now 50 had similar BMI values in past years. On the other hand, very long periods of follow-up present problems, as confounding by factors such as co-morbidities, changes in the social environment et cetera can not appropriately be controlled.

Winter and Back allege that we missed important studies with the search terms we used. They specifically mention the article of Hu et al. (1) and two case-control studies (2, 3). This is not the case. Because of the very large number of publications, we restricted our analysis to meta-analyses and to cohort studies related to the German population. The meta-analysis we included on stroke (4) does not support the results of the individual studies selected by Winter and Back (4). Our statement that “there is no association with stroke risk” is based on the analysis of the cohorts in the meta-analysis, who were Caucasian (from Australia and New Zealand) (4). In our opinion, these results can be transferred to the European population.

Wirth criticized the lack of scientific evidence for the statement that “a BMI of about 27 kg/m2 in midlife is now associated with the lowest mortality”. These results are based on the NHANES data from the USA. Wirth’s statement that only the BMI was used as a measure of obesity in our study is not correct. WC (waist circumference) and WHR (waist to hip ratio) were also analyzed, in so far as we managed to identify corresponding meta-analyses or German population-based cohort studies. Please refer to the results and discussion section, as well as Table 5 and Tables 1, 3 and 4 in the Web Appendix.

According to Wirth, “other diseases could not be identified”. This sentence has been wrongly quoted. The correct wording is: “No meta-analyses focusing on the risk of myocardial infarction were identified.”. Wirth also writes that “A comprehensive presentation of obesity-associated diseases would have shown how frequent and severe the secondary diseases of obesity can be”. There seems to be a misunderstanding here. We have emphasized the risk of obesity – rather than overweight. However, no meta-analyses or German population-based cohort studies could be identified for various diseases or target parameters. Our article contained an adequate discussion of any possible study or publication bias for diseases caused by overweight or obesity.

Orth and Dierkes are mistaken in their assumption that “there is in fact an increase in the overall mortality in the EPIC cohort for a BMI of 28–30 kg/m2”. The relative risks they mention are not statistically significant (see Table 3 in our article). The EPIC data (5) show that the overall mortality is increased when BMI is under 21 kg/m2 or over 30 kg/m2 – relative to the overall mortality with BMI between 23.5 and 25 kg/m2. Orth and Dierkes write that our phrase “whether smoking alone or, in addition, the resulting decrease in body weight increases the risk of bronchial carcinoma” implies that obesity may protect smokers. We did not intend to imply this. The meta-analysis from 13 individual studies (6) was included in our article and shows that an increase of 5 kg/m2 in the BMI is associated with a decrease of 20% in the risk of lung cancer for women and of 30% for men. We agree that the BMI--associated risk of lung cancer is difficult to identify in the context of the high risk of smoking. 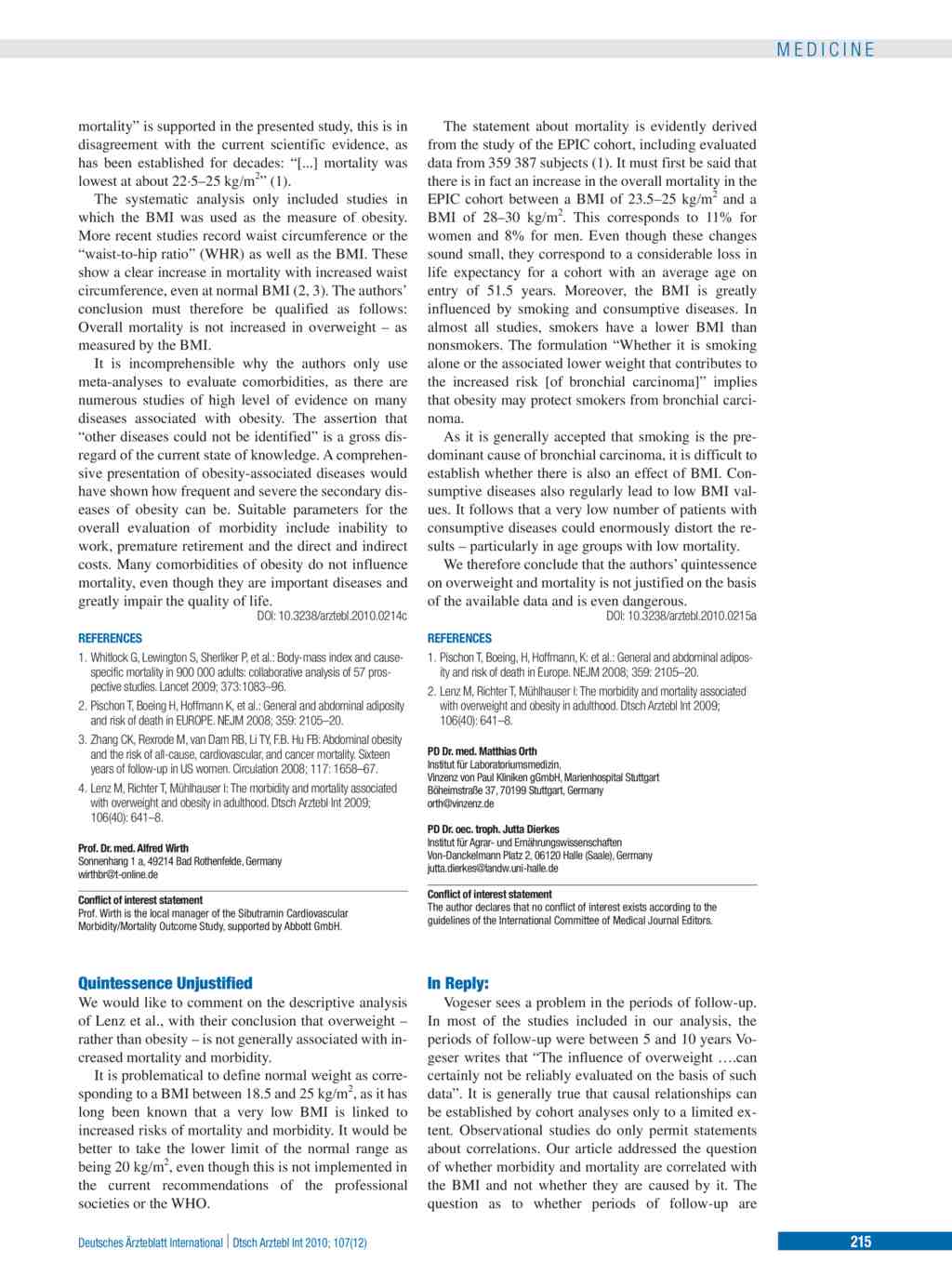