Current Trends in the Length of Stay in Neurological Early Rehabilitation

Background: Neurological early rehabilitation (phase B) is an integral component of the phase model of the German Federal Rehabilitation Council (Bundesarbeitsgemeinschaft für Rehabilitation, BAR). We studied the current trend in patients’ length of stay.
Methods: This study included 2060 cases of the BDH-Klinik Hessisch Oldendorf (a neurological rehabilitation clinic) from 2005 to 2008 that fulfilled the structural characteristics of item 8-552 of the German coding system for operations and procedures (Operationen- und Prozedurenschlüssel, OPS), which codes for neurological and neurosurgical early rehabilitation. We studied the parameters age, sex, length of stay, type of discharge, diagnoses, and morbidity. 75.7% of the collective carried a diagnosis of cerebral ischemia, traumatic brain injury, or intracerebral hemorrhage.
Results: The mean length of stay over the entire period of the study was 44.6 days. A successive reduction of the mean length of stay from 2005 to 2008 was evident, from 46.8 days in 2005 to 37.5 in 2008 (p<0.001). The morbidity, too, declined over the period of the study. 76.4% of the cases analyzed stayed in hospital for at least the minimum of 8 weeks proposed by the BAR. 39.5% of the patients improved to such an extent in phase B that they were able to be transferred to a further rehabilitation facility, while about one patient in five was transferred from early rehabilitation to a nursing facility. The mortality was 0.9%. Although the early rehabilitation procedure was correctly coded, a total of 60 different diagnosis-related groups (DRGs) were applied.
Conclusion: These data support the BAR’s recommendation for a minimum length of stay of 8 weeks in phase B. The observed shortening of the length of stay was found to be primarily the result of a reduction in morbidity during early rehabilitation. This, in turn, may well be due to a selection effect of the early rehabilitation procedure code 8-552.

The BAR’s phase model and the 1995 recommendations for the neurological rehabilitation of patients with severe and very severe cerebral damage in phases B and C (1) form the basis on which the length of inpatient stays can be considered, which has been agreed by the medical service of the German statutory health insurance system (Medizinischer Dienst der Krankenversicherung, MDK). For phase B, the BAR assumes a minimum treatment interval of 8 weeks to assess a patient’s potential for rehabilitation (1).

Hardly any current data are available for inpatient length of stay in phase B. A review article from 1999 described the heterogeneous distribution of the length of therapy, some with rapid improvements and some with extremely lengthy courses of treatment that took up to 12 months (4). Details of the duration of treatment are described in an earlier publication from 1996 (5): 34% of patients stayed in hospital for up to 3 months, 16% for 3 to 5 months, 31% for 5 to 12 months, and 19% for longer than a year.

Our study investigates developments in the length of stay in neurological early rehabilitation units in recent years as well as the parameters that influence patients’ length of stay.

Materials and methods
We included in a retrospective analysis all 2060 cases of early rehabilitation—admitted from 1 January 2005 and discharged by 31 October 2008 in the BDH-Klinik Hessisch Oldendorf (a neurological rehabilitation hospital)—that met the structural criteria of the early rehabilitation procedure OPS 8-552 (Box).

We used the software package SPSS (version 16.0) for our statistical analysis, which comprised analyses of variance (ANOVA) with post-hoc LSD tests, t-tests, and Pearson correlations. The results include the means and standard deviations in parentheses. To assess morbidity, the early rehab Barthel index (6) was captured for a proportion of cases. This index may assume values between –325 (severely affected early rehabilitation patient) and +100 (patient who has retained independence in the activities of daily life). Another morbidity measure is the PCCL (patient clinical complexity level) value, which is based on the complications and/or comorbidities at discharge as coded by the subdiagnoses. We also collected the coded subdiagnoses.

The lengths of stay were “adjusted” in some additional analyses, namely by the discharge types “death,” “transfer to an acute hospital,” “transfer to a hospice,” and “discharge against medical advice.” We selected this statistical method in order to mainly capture “normal” early rehab cases that were not brought to an early conclusion by complications or irregular discharges. However, in the results section we present “adjusted” as well as “unadjusted” cases.

Among the types of discharge, transfer to a subsequent rehabilitation measure dominated, with 39.5%, which means that in these cases, progress in rehabilitation was achieved, so that subsequent phase C treatment became possible (Table 3 gif ppt). 13.6% of cases of early rehabilitation were discharged normally, usually into care in the patient’s home. In 27.6% of cases, transfer to an acute hospital became necessary as a result of a morbidity requiring intervention—for example, hydrocephalus requiring a shunt or shunt-associated complications; mortality was 0.9%, with 5 patients dying in 2005, 6 in each 2006 and 2007, and 2 in 2008.

Age did not correlate with length of stay. However, the severity of illness influenced the length of stay (expressed as the early rehab Barthel index and PCCL value), as did the number of subdiagnoses, sex, and diagnostic group. Univariate ANOVA with length of stay as the dependent variable and the early rehab Barthel index category (U52.x) as the independent variable showed significant differences (F=40.4, p<0.001), (Figure 3 gif ppt). This means that the lower the early rehab Barthel index, the longer the length of stay. For the PCCL value, a similar result was observed (F=40.6, p<0.001). Post-hoc LSD tests confirmed longer lengths of stay for PCCL value 4 than for all other PCCL values. In bivariate ANOVA, the number of subdiagnoses correlated significantly with the length of stay. The correlation coefficient was r=0.33 (p<0.001). For female cases, a trend was noted towards shorter lengths of stay: 42.9 (30.7) days versus 45.8 (38.0) days (T=1.9, p<0.10). Table 2 lists the lengths of stay for the individual diagnostic groups. These differed significantly from each other (F=3.1, p<0.001). Post-hoc LSD tests confirmed that cases with hypoxic cerebral damage had a significantly longer length of stay than most other diagnostic groups.

Discussion
Neurological early rehabilitation in phase B is an integral part of the care of severely affected neurological and neurosurgical patients. In the context of the six-phase model devised by the BAR, phase B immediately follows treatment in the acute setting. The BAR assumes a minimum treatment duration of 8 weeks in phase B in order to assess the rehab potential of severely affected patients (1). For the entire study period (2005–2008), the mean length of stay for 2060 early rehabilitation patients who met the structural characteristics of the OPS 8-552 was 44.6 days; however, the range was wide. The minimum length of stay of 8 weeks as stipulated by the BAR was adhered to in 76.4% of cases studied. However, in view of the wide range it is obvious that substantial individual differences have to be borne in mind when considering the length of stay. The diagnosis is of crucial importance. Cases with hypoxic brain damage are notably above the overall average, at 56 days.

By way of an explanation of the reduction in length of stay from 2005 to 2008, the decrease in morbidity noted in the study sample is a main factor. Although the number of subdiagnoses increased during the study period, the other essential morbidity parameters—especially the early rehab Barthel index and the PCCL value—showed a decrease in morbidity. This surprising finding contradicts the perception of many early rehabilitation units, which have complained about increasing morbidity in their patients. We think that this seeming discrepancy is primarily due to a selection effect by means of the early rehabilitation procedure itself. The present study included only cases that met the structural characteristics of the OPS 8-552. This means that the patients have to be sufficiently resilient to cope with at least 300 minutes of therapy per day (Box gif ppt). This means that the procedure cannot be coded in very severely affected patients. It also should be borne in mind that especially cases requiring intensive care or ventilation are not coded with the OPS 8-552, but with, for example, the OPS 8-980 (“intensive medical complex treatment”). This also means that particularly severe cases with a very low early rehab Barthel index were not included in our analysis. The number of cases requiring ventilation in the BDH hospital notably increased in the study period. In 2005, merely 14 221 ventilation hours were recorded, whereas in 2006, the annual number had risen to 29 947, and in 2007 to 28 887 (7).

The introduction of the DRG system itself is likely to have a secondary role in reducing the length of stay when the morbidity parameters are taken into consideration. Any influence would only be indirect, via the selection effect explained earlier, which set in once the early rehabilitation procedure 8-552 had been introduced.

In our opinion, further causes of the reduced length of stay—in addition to the selection bias—may include the increased concentration of therapeutic services—a daily minimum of 300 minutes of therapy is required—and in stricter granting of services in neurological early rehabilitation. Although this assessment cannot be validated on the basis of the current data, some aspects of this development are mentioned in a publication by Wallesch (8). In our experience, an earlier change to the less well financially compensated treatment phase C is often enforced, mainly at the expense of the health insurers.

With regard to the question of whether the DRG system can adequately reflect early rehabilitation services, the following is worth mentioning: Since—in spite of the coding of the OPS 8-552—a total of 60 diagnosis related groups were recorded, the system does not (yet) have sufficient focus on the requirements of early rehabilitation. However, it should be pointed out that by means of DRG B42Z and B43Z, depending on the version of the DRG, reimbursement occurs following daily rates after 27 days. In our view, this is appropriate because the effort and expense for the treatment—for example, with regard to the daily requirement of 300 minutes' therapy—remain constant. We think that it is undisputed that patients undergoing neurological early rehabilitation are so severely affected that the hospital’s special funds will need to be put to use, and morbidity data confirm this. As a secondary finding, a trend was noted for female cases to spend less long in phase B than male cases. Since the subsequent phases C and D have shown the reverse ratio for the sexes, owing to psychosocial contextual factors (10), this result may hint at a more favorable rehabilitation potential in women, which is confirmed by the literature, even if only marginally (11).

In conclusion, the current study has shown a notable reduction in length of stay in neurological--neurosurgical early rehabilitation compared with the mid-1990s. The 8 week “observational interval” proposed by the BAR as the minimum length of treatment seems sufficient to capture about three quarters of early rehabilitation cases in the study, although the range is wide.

A limitation of the study is its case based, and not patient based, perspective. This means that the study cannot be used to assess the quality of results or the effectiveness of the neurological-neurosurgical early rehabilitation. This is not possible for the simple reason that we did not conduct a controlled, randomized study. Further, especially multicenter, studies are needed in order to elucidate this aspect further.

Conflict of interest statement
Professor Rollnick is medical director and Diplomkaufmann [business graduate] Janosch is managing director of the BDH-Klinik Hessisch Oldendorf, a hospital that specializes in neurological early rehabilitation.

Table 6
Enlarge All figures
Current Trends in the Length of Stay in Neurological Early... 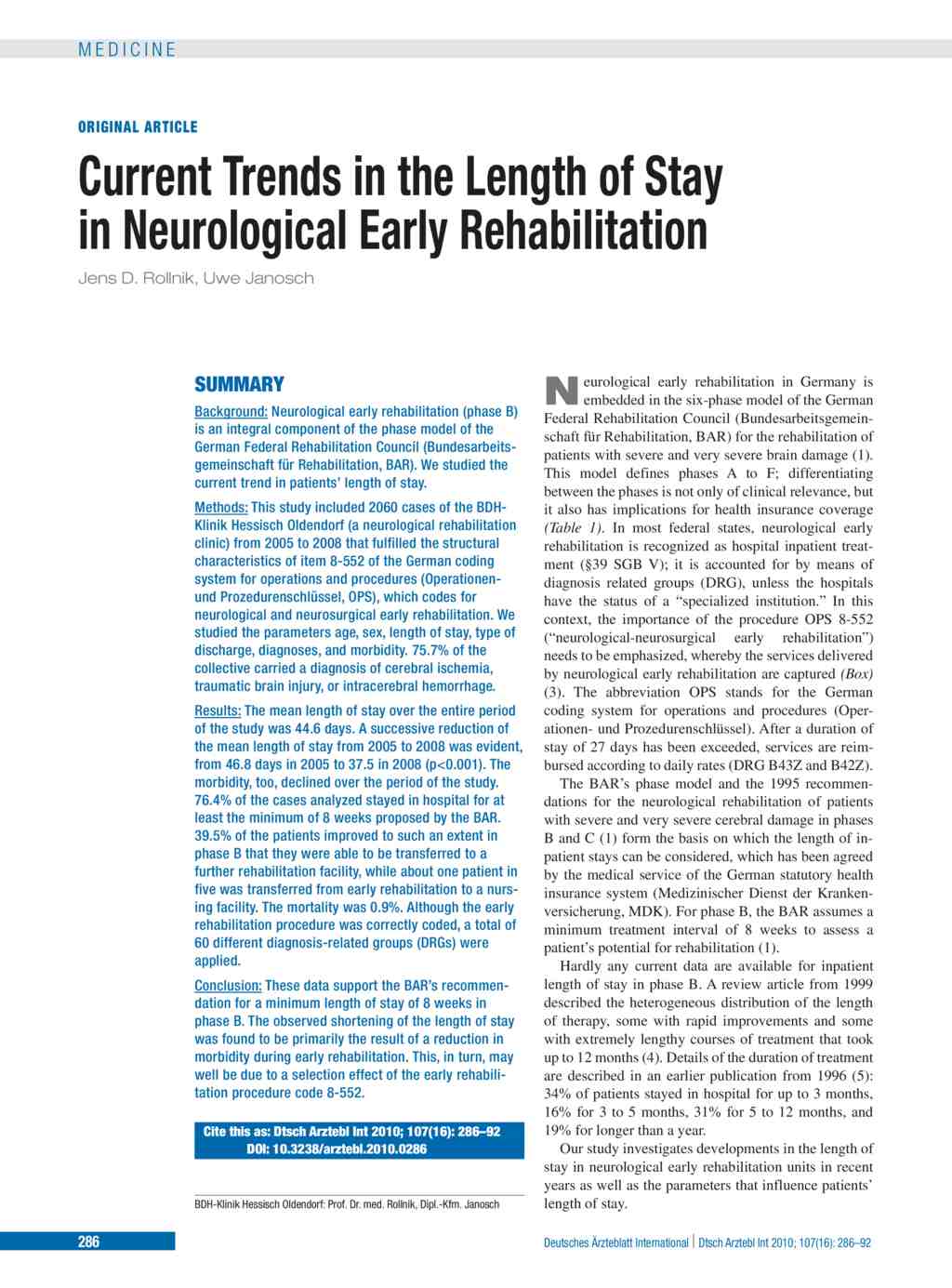