This short overview is intended to document the presence and distribution of these types of original -articles in Deutsches Ärzteblatt since the introduction of the medical-scientific section of the journal, i.e., the section that currently appears under the heading “Medicine.”

The purpose of this analysis is not just to satisfy our own curiosity, but to identify some important clinical studies that are not yet represented in databases such as Medline. As early as 1995, Egger and Smith (1) pointed out that many clinical studies are published in journals that are not represented in the international bibliographical databases—a problem that can lead to distorted conclusions in reviews and meta-analyses. Deutsches Ärzteblatt has only recently found its way into international databases such as Medline and Embase: Its scientific articles have appeared in Medline only from 2008 onward. Thus, all articles published in Deutsches Ärzteblatt before 2008 cannot be retrieved by a Medline search, which is the usual means of searching for articles on any medical topic. Yet some important articles were, of course, published in Deutsches Ärzteblatt before 2008.

Broad-based analyses of articles in other publications (2) have led to the rescue of many controlled studies from oblivion. As a consequence, many that are not retrievable on Medline can now be found in the Cochrane Controlled Trials Register, a database that has become an important source of review articles.

Half a century
This retrospective analysis includes a total of 697 original articles that were published from 1958 to 2009. All of these studies were categorized into study types in accordance with the classifications of the German Cochrane Center and of Blettner et al. (3, 4). Most of them involved clinical research, mainly single-case reports and case series. There were, however, 28 controlled studies in the group, including 12 randomized, controlled studies.

Over half a century of observation from 1958 to 2009, the number of original articles appearing in Deutsches Ärzteblatt increased, albeit with marked fluctuations in between (Figure 1 gif ppt): after a slow start, a rise became noticeable from the early 1970’s onward. Although the number of pages in the “Medicine” section of each issue has remained constant right up to the present, about 15 original articles were published each year starting in the early 1970’s, with another marked rise in recent times. 2008 saw the publication of 34 original articles, the largest number in a single year to date. Over the last 10 years, the number of case series in Deutsches Ärzteblatt has declined, while that of cross-sectional and controlled studies is on the rise.

The number of authors per article increased dramatically, as has also been found in studies of other journals (6): The number first grew at a leisurely pace, up to an average of 2.2 authors per article in 1994, then rose steadily to reach 3.4 in 2006 and 6.5 in 2009. As for the percentage of women among first authors, the figure of 10% for the entire period from 1958 to 2009 confirms the well-known underrepresentation of women (7). There has been recent improvement, however, with women accounting for a little over one-third of all first authors in the last two years (Figure 2 gif ppt).

The Medical-Scientific Editorial Office of Deutsches Ärzteblatt is happy to receive original articles in the fields of clinical research and health services research and to sustain the role of our journal as an organ for the publication of research findings. Publishing in Deutsches Ärzteblatt has also become significicantly more attractive to authors in recent years, for a number of reasons: indexing in Medline and all other important medical databases, complete translation of all scientific articles into English for publication in our English-language online journal (Deutsches Ärzteblatt International), open access on the Internet to both the German and the English versions, and the authors’ honorarium. Also, Deutsches Ärzteblatt will receive an impact factor in the near future. 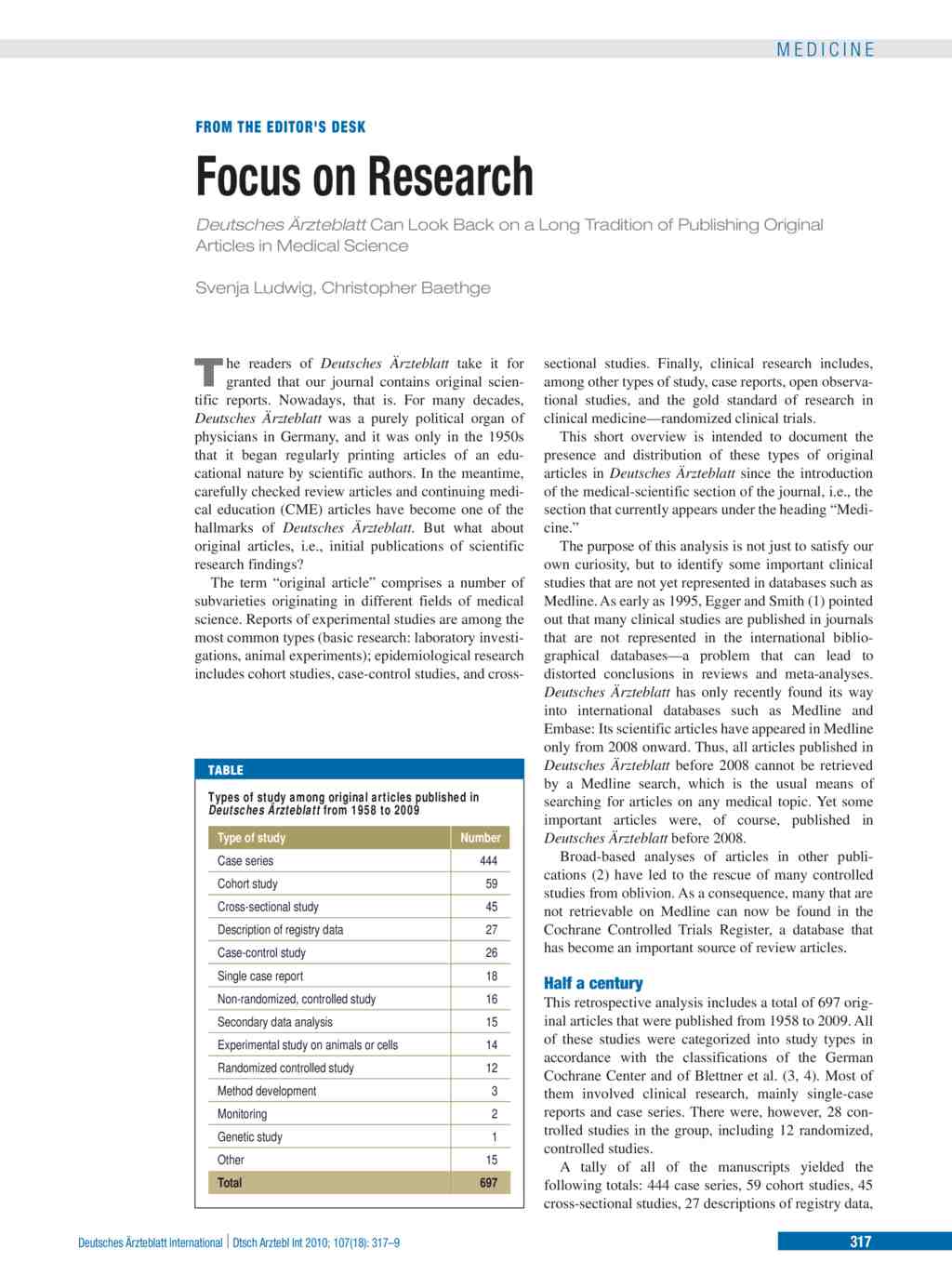