Dtsch Arztebl Int 2010; 107(22): 390-1. DOI: 10.3238/arztebl.2010.0390
Editorial to accompany the article ”A Survey of German Physicians in Private Practice About Contacts With Pharmaceutical Sales Representatives“ by Klaus Lieb and Simone Brandtönies in this issue of Deutsches Ärzteblatt International

Since no prescription-only drug will reach its intended target—the patient—without a doctor’s prescription, it is logical in a free market economy that pharmaceutical companies include prescribers directly in their marketing campaigns. Visits from pharmaceutical sales representatives (PSR) is an effective (and expensive) instrument to influence doctors. The PSR’s primary task is to present a manufacturers’ products in such a way that the doctor is persuaded to issue prescriptions for that particular manufacturer’s products.

Doctors’attitudes to PSR in Germany have thus far not been systematically studied. A research project by Klaus Lieb and Simone Brandtönies, from the University of Mainz, has now shed some light on what has so far remained in almost complete darkness. The scientists surveyed specialist physicians in private practice with regard to their experiences with and attitudes towards pharmaceutical representatives (4). The fact that this study—which was conducted by physicians—will stimulate discussion among physicians is very welcome. The survey was conducted in 2007, but its findings are as relevant for today as they were then.

One of the most important results of this study is an often suspected phenomenon: Each individual doctor participating in the survey thought they were almost “immune” to attempts at manipulation on the part of the pharmaceutical representative, but they blithely assumed that their colleagues were easily influenced. This cognitive dissonance is all the more remarkable because only 7% of survey participants reported that the PSR tried to influence them “rarely” or “never.” The majority was aware that PSR want to influence doctors’ prescribing behavior (and were aware of the fact that this is, after all, their primary task and objective).

Pharmaceutical companies would not use this expensive instrument if it did not yield the desired success. 39% of survey participants reported that they liked prescribing new drugs (5), so that their patients benefited more rapidly from new developments. However, 56% reported that they preferred to prescribe established medications that were tried and tested. These conservative prescribers are likely to become the main target once those willing to experiment have been brought into line with the help of small gifts.

The small gifts that received equal ratings in the survey were drug samples, stationery, diaries, and free lunches (rarely, at only 2%). This may be formally correct but is still regrettable because drug samples are mostly passed on by the doctors to their patients and are not deployed for doctors’ own use, such as the other gifts are. Drug samples make a product “understandable” to the treating physician because he/she will usually pick up the package and its contents and study it in detail, alongside the instructions for users. This makes sense. However, many doctors erroneously believe that handing on drug samples relieves their drug budget. This is a classic self deception: Drug samples open up access to the market as easily as keys open locks. Only 2% of survey participants did not accept drug samples.

The fact that most of the information brochures (up to 73%) handed over by the pharmaceutical representatives end up unread among the practices’ rubbish should capture the attention of pharmaceutical companies’ marketing departments. They are producing expensive, glossy rubbish.

It would be hard to prove that gifts in the shape of pens and diaries increase the turnover of pharmaceutical companies. However, such articles contribute to the livelihood of the promotional merchandise industry.

One quarter of survey participants responded “yes” to the question whether or not they had received conference invitations, including travel expenses, without being asked for anything in return. This type of public relations can be assumed to be successful.

Survey participants were critical with regard to how objective they thought information sources for physicians were. Pharmaceutical representatives and pharma-supported CME received the worst ratings (6). However, 52% of survey participants would regret the cessation of PSR visits. The stated reason: They'd miss the information provision, offers of sponsored educational events, and the drug samples.

Non-interventional observational studies (7) are part of the repertoire of some drug manufacturers. 43% of doctors in the survey reported that they participated in these observations. This high proportion is not representative for the majority of all doctors who treat members of statutory health insurance schemes, but it highlights the fact that the fees paid to the practices for these observations are a much-needed additional source of income in the practice budget. The minority of participants in such studies—which, according to the German Drug Registration and Administration Act, are obligatory for pharmaceutical manufacturers—actually expect to generate important scientific data for the benefit of health services research in their practices, in order to draw conclusions about a medication under normal practice conditions outside controlled studies. The fact that such non-interventional observational studies influence doctors’ prescribing behavior is undisputed. They should be abolished in their current form—especially as the media keep using them as a wholesale excuse to paint all doctors and the pharmaceutical industry as villains (8).

The current paradigm shift in the system, which is removing doctors’ privileges to prescribe by means of discounted and selective contracts, will accelerate the current wave of redundancies among PSR. However, no one would want to make do without pharmaceutical sales representatives altogether, because doctors receive news about pharmacotherapies more rapidly via this channel than by means of traditional, neutral information channels. They even receive information about substances that they may not require in their practice—which is not a bad thing. Most physicians are fully aware that industry information is of a similar validity to parents’ praising their children—both need to be taken with a pinch of salt.

The glory days for pharmaceutical sales representatives are certainly over. The instrument is expensive, doctors’ attitudes are becoming more critical, and directly influencing prescribing behaviors by means of so called traffic light systems in the practice software, in order to ensure rational and economical pharmacotherapy is becoming increasingly important. Some pharmaceutical companies are already engaged in providing better qualifications for the PSR and to thus replace quantity with quality.

Conflict of interest statement
Dr Bausch, in the course of his responsibilities in doctors’ self governance, as an expert on the issue of “rational and economical pharmacotherapy,” has received honoraria—including travel expenses—from statutory health insurers and pharmaceutical companies. 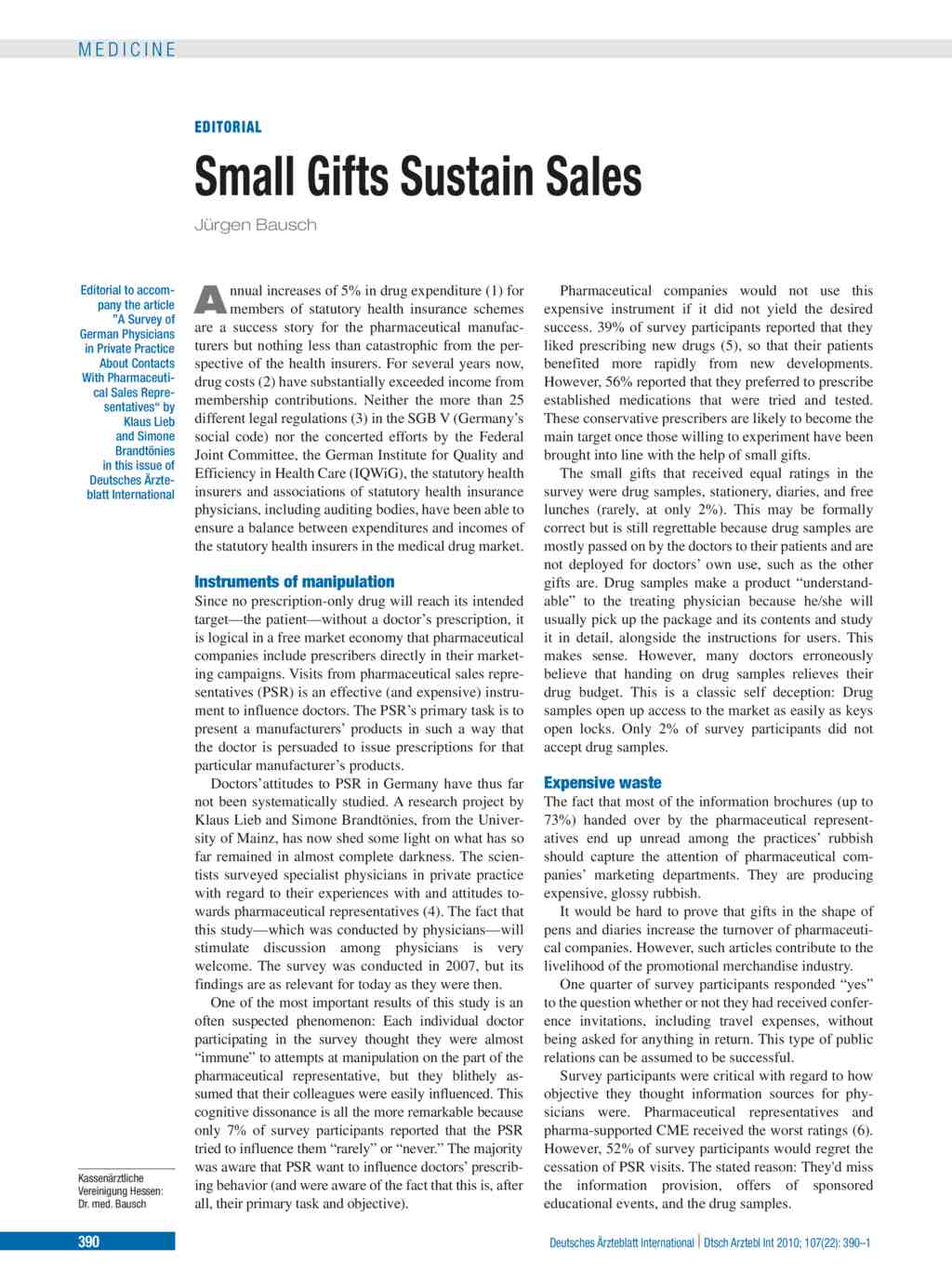