We thank our correspondents for their contributions and for their interest in our article. The publication by Eker et al, cited by Christian Herzmann and colleagues, was cited in our review article with regard to very diverse aspects because it does indeed contain important data on MDR-TB and XDR-TB in Germany. The network’s activities help close existing gaps in our knowledge and answer epidemiological and clinical questions. However, with regard to the success rates of 80% in MDR-TB and XDR-TB, as cited in the letter, it should be pointed out that this proportion relates exclusively to patients in whom treatment completion was documented (125/184). 26 patients who were lost to follow-up were not included—and in these patients, a successful treatment result is highly doubtful. 33 further patients were still undergoing treatment at the time the data were collected. The success rate according to the definition, which was used for the purpose of comparison with other studies, was 59% for the entire cohort. We used as a particular example the publication by Eker et al to point out that “the relevant percentage of patients whose therapeutic outcome is unknown, or whose treatment has not yet been completed, can substantially diminish the success rate, depending on how this rate is defined.” We wish to thank our correspondents for providing us with an opportunity to explain the problems in some greater detail. For the cited study, may we remind our readers of the comparatively higher lethality due to TB for this age group (about 40 years of age), of 14 deaths among 177 patients with MDR-TB and 1 death in 7 patients with XDR-TB. If the reference variable is adjusted for the above categories of patients (14/120), then the letality for MDR-TB is almost 12%.

The relevant number of patients with complex forms of resistance described by Eker et al, whose therapeutic result is not easy to determine, gives cause for concern and is almost certainly also a manifestation of the special problems that Dr Mütterlein describes in his letter. Compulsory isolation of men with TB in Parsberg and of women with TB in Bad Lippspringe requires careful examination of each individual case. The decision was certainly not made lightly, but it should equally certainly not depend on financial factors. As drastic as compulsory isolation may seem, these institutions provide persons whose multiple and complex health problems endanger their therapeutic success with an opportunity to receive competent, individually tailored, and successful treatment for their illness. Additionally, the risk for further spread of the mostly resistant TB—and thus the risk for the patient’s environment—is successfully minimized.

We thank Professor Hundeiker for providing additional historical background information and for his interesting details of the early days of anti-TB chemotherapy. 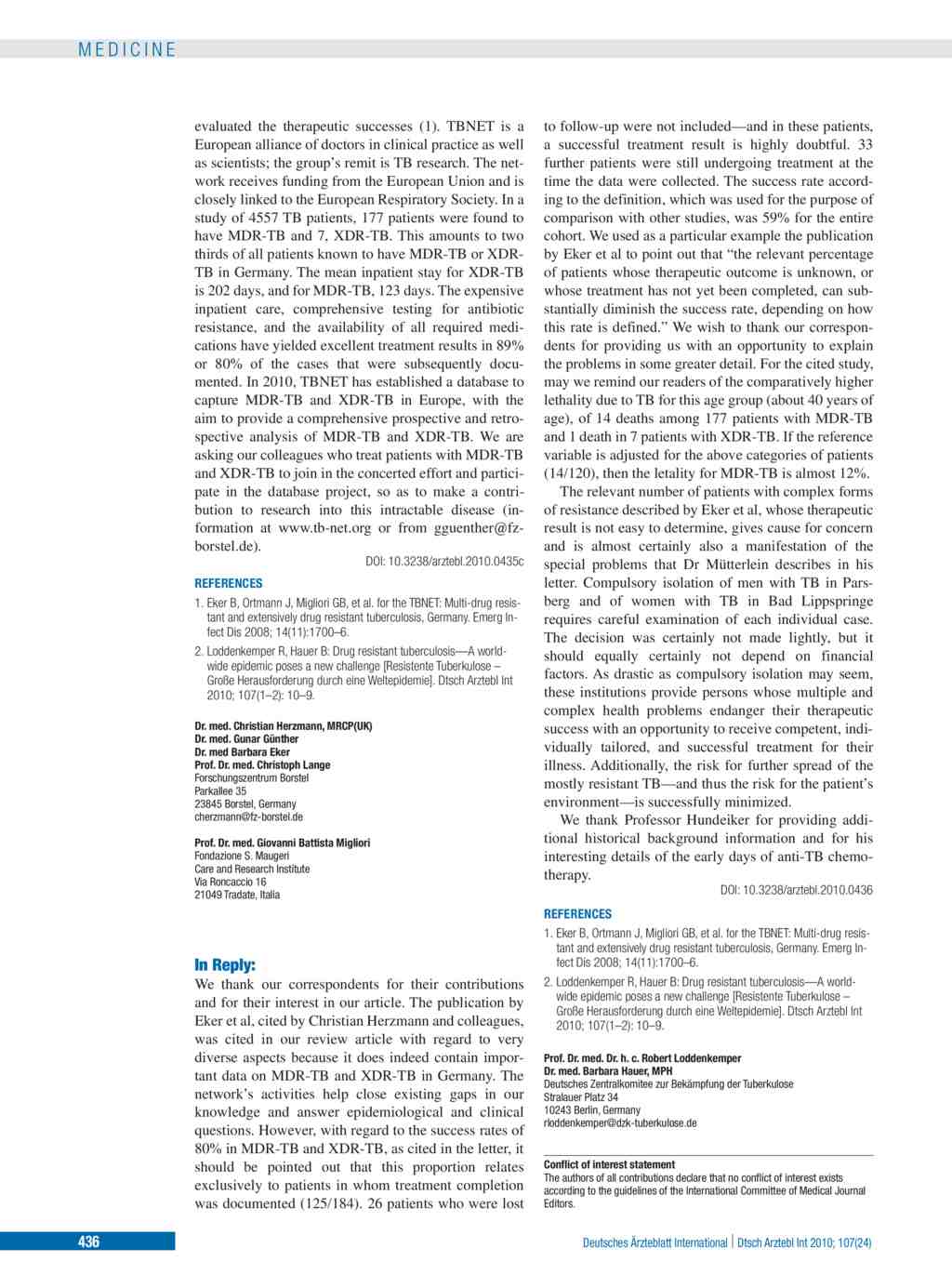