Methods: We studied the interaction between BMI and waist circumference with respect to the risk of developing type 2 DM in a cohort of 9753 men and 15491 women, aged 35 to 65, who participated in the European Prospective Investigation into Cancer and Nutrition (EPIC)-Potsdam. The statistical analysis was performed with multivariable-adjusted Cox proportional hazard regression.

Conclusion: These findings imply that the waist circumference is an important additional piece of information for assessing the risk of type 2 DM, particularly among persons of low or normal weight.

It is generally accepted that overweight and obesity are important in the development of type 2 diabetes mellitus. Obesity is understood as an abnormal increase in body fat. This is measured in practice using the body mass index (BMI), i.e., the weight in kilograms divided by the square of the height in metres. The guidelines of the German Obesity Society (1) and the World Health Organization (2) define overweight as a BMI of at least 25 kg/m2. BMI between 25 and 29.9 25 kg/m2 is defined as pre-obesity; BMI of at least 30 kg/m2 is defined as obesity. The classifications in the USA guidelines (3) are slightly different (Table 1 gif ppt).

Although the BMI captures the degree of overweight and obesity, it ignores body fat distribution. For example, visceral fat tissue is metabolically more active than non-visceral fat and secretes more hormones and cytokines, which may be important for the development of diabetes (4, 5). Measuring waist circumference is a simple means of assessing the levels of visceral fat. Increased waist circumference is also closely associated with an increased risk of diabetes (6). However, current obesity and diabetes guidelines only recommend that waist circumference should be measured from a BMI of 25 kg/m2 (1–3), as this is the level at which the increased risk is thought to start (Table 1).

However, assessing risk on the basis of anthropometric parameters is not easy, as there is a strong correlation among these markers. As overweight and obesity are among the strongest known risk factors for type 2 diabetes, risk statements based on anthropometric measurements should be as precise as possible and allow for the complex interactions between these parameters. The objective of the present study was therefore to examine how the risk for type 2 diabetes can best be described by measuring BMI and waist circumference. This investigation was part of the EPIC Potsdam study, one of the largest prospective population-based cohort studies in Germany.

The European Prospective Investigation into Cancer and Nutrition (EPIC) Potsdam study is a part of a prospective Europe-wide study investigating the links between nutrition, lifestyle and the incidence of chronic diseases. Between 1994 and 1998, 27 548 persons (including 16 644 women), from Potsdam and surroundings, aged from 35 to 65 years, were included in the study. The basic investigations included anthropometric measurements, personal interviews, and completion of questionnaires on lifestyle, nutrition and sociodemographic characteristics (7). 22.3% of the invited persons were recruited into the study. All participants were informed of the nature of the study and signed an informed consent form. The Ethics Committee of the Brandenburg State Medical Association approved the project.

Persons were excluded from our analysis who self-reported a diabetes diagnosis at baseline, as well as those with incomplete follow-up, or missing anthropometric or covariable data or without medical confirmation of diabetes during the follow-up period. Data from 9753 men and 15 491 women were available.

Anthropometrics and other variables

The anthropometric measurements were performed by trained personnel under standardized conditions, following the recommendations of the World Health Organization. The participants wore only light underclothes for these measurements (8). Body weight was measured to the nearest 0.1 kg and height to the nearest 0.1 cm. Waist circumference was measured at the midpoint between the lower rib and iliac crest (8, 9). Level of education, highest school qualification, physical stress at the workplace, and alcohol consumption were recorded with a questionnaire. Medical history, general physical activity, and smoking habits were recorded in personal interviews. Physical activity was expressed as PAL (physical activity level), calculated as a person's total energy expenditure (i.e. the sum of the products of duration and intensity of individual activities such as sport, housework, gardening, manual work, climbing stairs, walking, running or cycling) over 24 hours. The intensity was calculated in the form of metabolic equivalents (METs). Television and sleeping habits of the participants and seasonal differences in activity were also considered (10). One MET is equivalent to energy consumption when sitting still.

Relative risks and 95% confidence intervals were calculated separately for each sex by Cox proportional hazard regression (11). The age of the participant was taken as the time at risk. The time of entry was the age at recruitment. The time of exit was defined as the age at diagnosis of type 2 diabetes or the last follow-up (censoring) (12, 13). The analysis was stratified by age (STRATA statement in PROC PHREG in SAS) and adjusted for height (continuous), smoking habits (never smoked, ex-smoker, smoker), alcohol consumption (0.0–5, 5–10, 10–20, 20–40 or >40g/day), physical activity (continuous), level of education (in education, no school qualification or semiskilled worker, skilled worker, technical college leaving exam, technical university or university qualification), highest school qualification (no school qualification, completion of the 8th class, completion of the 10th class, qualification to enter a technical university, qualification to enter a university) and physical stress at the workplace (light, moderate, intense). Waist circumference and BMI were included in the regression model as continuous variables, either separately (models 1 and 2), or together (model 3), or with an additional interaction term (model 4). The relative risks were then calculated on the basis of the categories of BMI and waist circumference. The absolute risk of developing diabetes within five years was calculated from the multivariable adjusted survival time function of the Cox proportional hazard regression. The sex-specific arithmetic means for the cohort were taken for each covariable.

The authors also performed their analyses with the waist-to-hip ratio (WHR) and the waist-to-height ratio (WHtR), which gave similar overall results.

BMI and waist circumference serve as parameters to estimate general or abdominal fat masses, respectively. It is assumed that the abdominal fat mass is of particular importance in the development of not only type 2 diabetes, but also of other chronic diseases, including cardiovascular diseases and some forms of cancer (14, 15). Thus, several studies have found that the waist circumference is a strong predictor of diabetes (6, e1). Moreover, recent studies in Germany have found high prevalences for obesity (23.9%) and increased waist circumference (39.5%; men>102 cm, women >88 cm) (16). There is, however, a strong correlation between the two parameters and the terms “general” and “abdominal” obesity are not mutually exclusive, but designate overlapping fat compartments. It is clear from our studies that the strength of the association of waist circumference with the risk of type 2 diabetes depends on BMI. Thus the relationship between waist circumference and the risk of type 2 diabetes is more marked at low BMI than at higher BMI. In individuals with low BMI, waist circumference is a more exact measure of visceral fat, as these individuals mostly possess less subcutaneous fat that may affect waist circumference. However, it is visceral fat which on the other hand greatly increases the risk of diabetes (4, 5, 17, 18). On the other hand, the biochemistry of subcutaneous fat is different from visceral fat (e1–e10) and there is even evidence that subcutaneous fat produces substances which may have a favorable effect on glucose metabolism (19). It is therefore presumably the quantity of subcutaneous fat which causes the negative interaction between waist circumference and BMI with respect to diabetes risk, as observed in our study. In addition, the musculature is an essential determinant of insulin sensitivity (20), so that, at a given fat mass, individuals with low muscle mass may have a greater risk of diabetes than those with larger muscle mass.

In the present study, the median was selected as the limit between small and large waist circumference. Even though this limit is less than conventional risk limits (men: 102 cm; women: 88 cm), we found a clear increase in diabetes risk for individuals with high waist circumference. This is in accordance with the results of other studies, which show that even waist circumferences below the current limits are associated with increased risk of diabetes (e1, 23). Some organizations have already reacted by reducing the circumference limits within their guidelines (2, 24), although many guidelines still contain these limits (3) and they are used in routine clinical work. It is also reasonable to ask whether fixed limits make any sense at all, as it was shown that the diabetes risk increases continuously with increasing waist circumference (e1, 23, 25). One limitation of our results was that we were not able to consider any influence of a hereditary disposition to diabetes. A second limitation was that we did not perform our own laboratory diagnoses for diabetes. 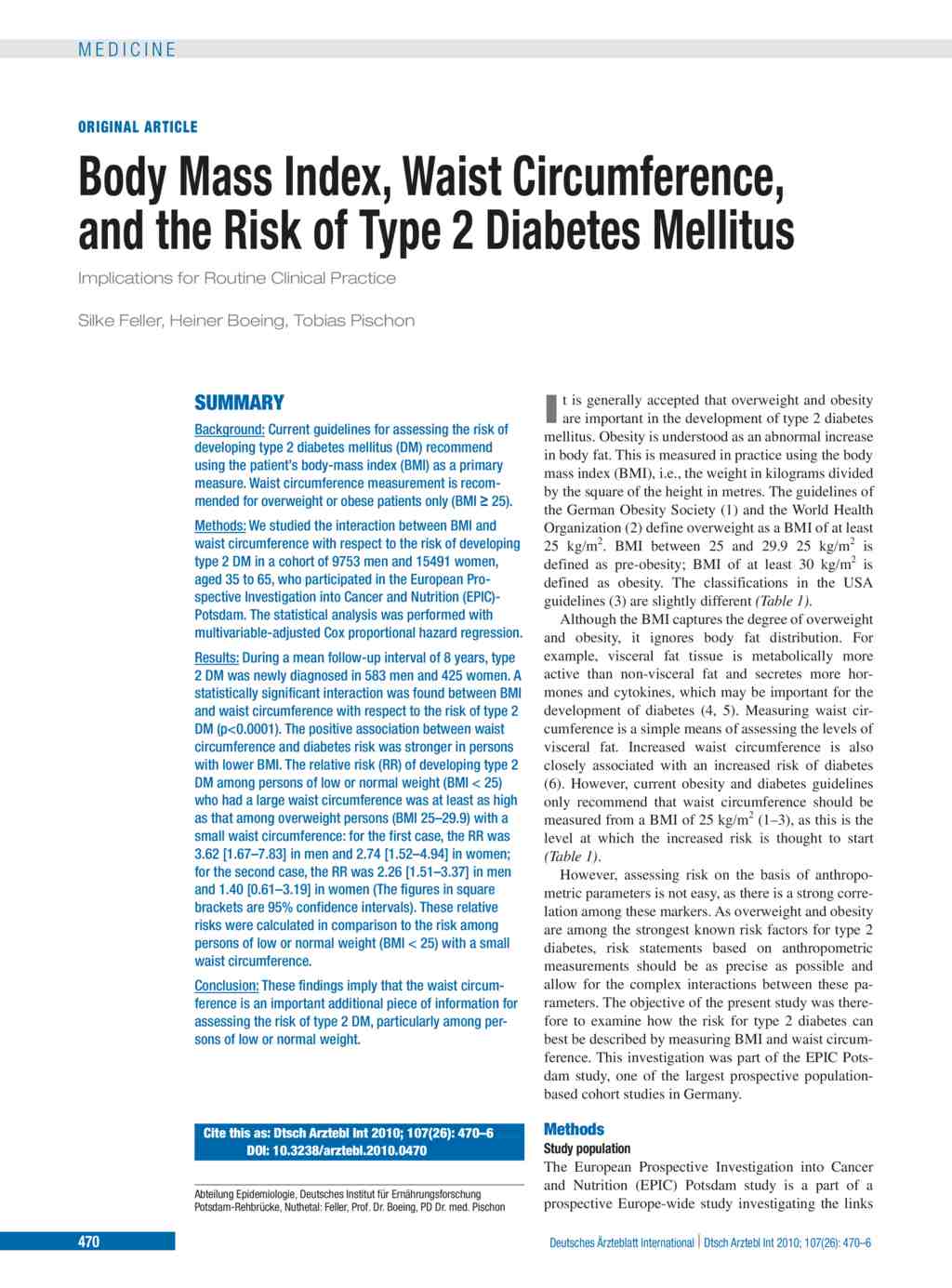