The statement that child abuse does not receive enough attention in academic medical teaching is certainly correct. We would go so far as to say that a substantial information deficit also applies to medical training and in the continuing professional education of doctors and allied medical professions as well as specialists working for the state authorities (youth office, police, the legal system). The vastly underrated consequences of child abuse include psychological damage, and we support Professor Fegert’s recommendation for psychological diagnostic evaluation of the child as well as the abuser—often one or both of the child’s parents—as well as the need to discuss implications for action arising from the situation. However, in Germany—and this was the gist of our article—no single compulsory nationwide notification system exists for cases of suspected child abuse. Pertinent regulations have been formulated in individual states only, and are to be adhered to within the relevant state. How undesirable such a multitude of regulations is also becomes clear from our correspondent’s mention of an announced but yet to be implemented regulation within the federal child protection law. Additionally, our correspondent emphasizes the need for a more comprehensive psychiatric diagnostic evaluation of the relationship between the child and its parents, but this was not possible within the scope of our article. For this reason, we focused on the psychosomatic evaluation and capturing the familial dynamics—not least for the purpose of sketching the outlines of a sympathetic approach to these human disasters.

Münchhausen syndrome by proxy (MSbP), whose existence was debated even in the more recent past, is currently regarded primarily as a form of child abuse, with the different types we mentioned in our article (“active inducers”, doctor addicts”, help seekers”). In view of these types, further classification of the syndrome from a psychiatric-psychosomatic perspective makes complete sense, as Professor Heuft points out. However, the format of a review article does not allow for the inclusion of such specialized aspects—which then would also have needed to be taken into account for other forms of abuse. The differentiation mentioned in the second letter, such as hypochondriasis by proxy and parents’ depressive mania, should not be overlooked in this context. This is clinically useful thanks to its subtle nosological nuances, although the intention again is to merely provide an idea of existing subject areas.

The author declares that no conflict of interest exists according to the guidelines of the International Committee of Medical Journal Editors. 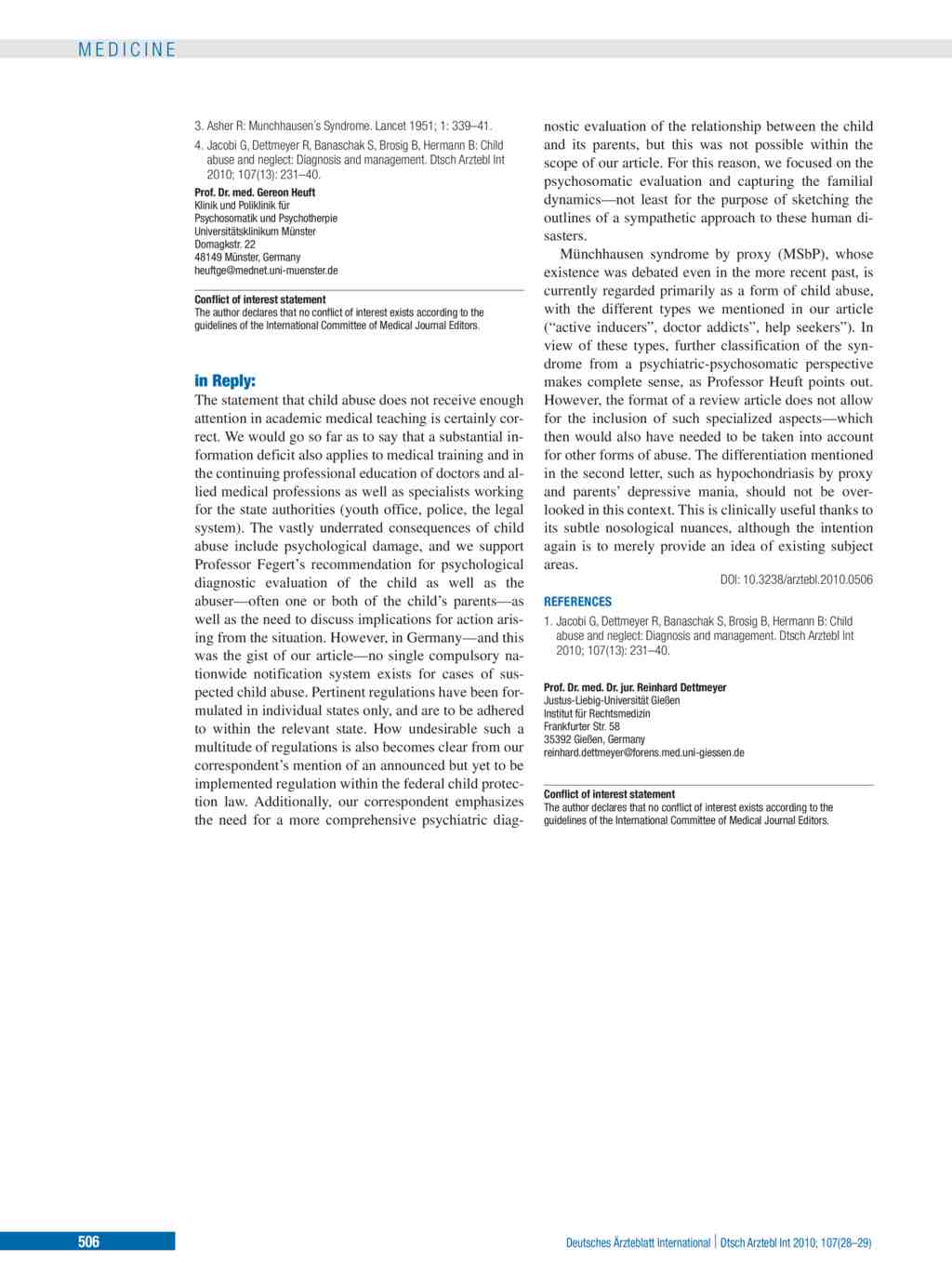