Background: The N-methyl-D-aspartate (NMDA) antagonist dextromethorphan has been available in pharmacies without a prescription since 1954 as an antitussive agent. There is an alarming increase in reports of its abuse. Dextromethorphan is avidly taken, mainly by young people, as a psychoactive drug. The currently available data yield incomplete information about the extent of the problem and its significance for addiction medicine in Germany.

Case presentation and course: We report the case of a 44-year-old man who became dependent on dextromethorphan through years of abuse, buying the substance for himself without a prescription in German
pharmacies. He told us he had taken it regularly for six years. He had become dependent on dextromethorphan, ultimately taking it in a dose of 1800 mg daily. This led him to overt neglect of his work and leisure activities. A urine sample taken on admission to the hospital was found to contain dextromethorphan. During inpatient detoxification, he developed an vegetative withdrawal syndrome consisting of craving, diaphoresis, nausea, hypertension, and tachycardia. He was treated on our ward for three weeks, and a stay in a residential detoxification facility was planned thereafter.

Conclusion: Dextromethorphan is a psychotropic substance that carries a potential for abuse and dependence. On the basis of the currently available data, its reclassification as a prescription drug should be
considered.

Current data from the Word Drug Report 2009 by the United Nations Office on Drugs and Crime look hopeful at first: the markets for cocaine, opiates, and cannabis are stagnating worldwide (1). Alarmingly, on the other hand, in addition to new modes of distribution for medicines and drugs, e.g., over the Internet (2), there have also been observations of increasing misuse of synthetic substances and medicines that have a psychoactive effect (3, 4).

The antitussive dextromethorphan has been available over the counter (without prescription) from pharmacies since 1954. As a sigma-1 receptor agonist and N-methyl-D-aspartate (NMDA) receptor antagonist, dextromethorphan has a similar pharmacodynamic effect to, for instance, lysergic acid diethylamide (LSD), ketamine, or psilocybin (5, 6). Dextromethorphan therefore belongs to the group of substances with a psychoactive (dissociative) effect. Until recently, dextromethorphan was still classified as a synthetic opioid, since its chemical structure is similar to that of codeine; the sigma-1 receptor was originally regarded as an opioid receptor. Today dextromethorphan is no longer classified as an opioid (5, 7). Its antitussive effect is probably mediated by both sigma-1 and NMDA receptors (8). In the etiopathogenesis of addictive behavior, GABAergic/antiglutamatergic mechanisms play a decisive role in the development of dependency. Over time, the addictive substance-taking behavior often becomes compulsive-repetitive, rigid, uncontrolled, and tolerance develops together with autonomic withdrawal symptoms. In parallel to this, with many addictive substances glutamatergic neurotransmission is reinforced and GABAergic neurotransmission reduced (glutamatergic hyperexcitability). This excitatory transmission is mediated via NMDA receptors (glutamate receptors). In a recently published study, Soyka and colleagues showed that the NMDA antagonist dextromethorphan, as a glutamate antagonist, has addictive potential in that it produces a psychotropic effect similar to that of alcohol (9).

The active substance dextromethorphan is now available in a large number of generic drugs on the market. Sales of one commercial preparation, for instance, went up by 32.9% (measured in defined daily dose, DDD) (13) between 2007 and 2008, for reasons that remain unknown.

There are no accurate epidemiological data about the abuse of dextromethorphan as a psychoactive substance. However, only five cases of confirmed dextromethorphan dependency have been described in the literature so far.

The following case report describes a patient who developed a syndrome of dependency on the over-the-counter antitussive dextromethorphan.

A 44-year-old patient attended the outpatient addiction clinic asking for advice about inpatient detoxification treatment for dextromethorphan. At the time of presentation he was taking a daily dose of up to 1800 mg of dextromethorphan tablets (normal therapeutic dosage is up to a maximum of 120 mg/day). The reason for presentation was that he had noticed in himself an increasing reduction in his general ability to function. This had led to increasing absences from work, and as a result his company’s medical service had learned of the addiction problem and referred him to our department. In addition, he had in the end been spending over 300 euros a month on dextromethorphan bought over the counter. He had also experienced withdrawal symptoms in the form of sleep disturbances, nausea, and hyperhidrosis when he attempted to reduce the dosage himself. We established retrospectively that in ICD-10 terms he had been dependent on dextromethorphan for about 5 years (see Box gif ppt for the ICD-10 dependency criteria met by the patient). The patient had noticed physical withdrawal symptoms when attempting to cease consumption since about 1 year before admission. The only ICD-10 dependency criterion not met by the patient was “continuation of consumption despite clear evidence of harmful psychological or physical consequences.”

Dependency as defined by ICD-10 is taken to be present when at least three of the total of six criteria can be demonstrated within the course of a year. The ICD-10 diagnosis of “harmful use” requires “only” that the psychological or physical health have already been damaged by consumption of the addictive substance, but no other dependency criteria are met.

The patient had had his first contact with dextromethorphan about 6 years previously, when he had been actively searching on the Internet for intoxicating substances. Initially dextromethorphan had had a subjectively pleasurable sedative and intoxicating (alcohol-like) effect on him, but this had disappeared in the course of time.

Apart from an alcohol dependency, the patient’s previous psychological history was normal. The patient reported plausibly (among other things since it was confirmed by his partner), that he had been completely alcohol-abstinent for the past 18 years, since undergoing inpatient dehabituation treatment lasting several weeks. No other diseases were recorded.

At this time the patient had been living with the same partner for many years and had a full-time job as a chemical technician. Recently he had been neglecting his interests and hobbies (e.g., reading novels) completely. He had no criminal record.

He now aimed at complete abstinence from dextromethorphan and wanted to apply for long-term therapy after detoxification. Voluntary inpatient admission for dextromethorphan withdrawal was agreed with the patient.

The psychological report at the time of admission showed the patient to be alert, lucid and well oriented, pleasant and cooperative. His concentration and attention were slightly reduced, but there was no marked memory impairment. The patient’s formal thinking was slowed, with some prolonged delays in responding. There were no delusions, no hallucinations or ego disturbances. His mood at the time of admission was slightly depressed and there was some loss of affect. Drive was diminished. Psychomotor tests were normal. He had no anxieties or compulsions. Appetite and sleep were undisturbed. There was no indication that he was a danger to himself or others.

The medical and neurological exam on the day of admission was bilaterally normal except for slight ataxia towards the end of the finger–nose test. ECG was also normal.

Since dextromethorphan cannot be detected by semiquantative drug screening, a multidimensional gas chromatographic test of the urine had to be carried out. On the day of admission the urine tested positive for dextromethorphan. Three follow-up tests carried out later during the inpatient stay were negative.

The patient completed our behavioral therapy–based detoxification program in every aspect, with the goals of detoxification, recognition (admission) of dependency, social stabilization, and qualification to continue treatment as an outpatient. The therapy program contains behavioral therapy components such as analyzing relapse situations, role play to prevent relapse, and training in social competence. In addition, relaxation techniques and group physical activities are offered. The treatment attempts in particular to activate personal resources, especially the patient’s own coping abilities. Behavioral patterns and habits that contribute to the addiction are analyzed and changed through alternative modes of behavior.

Physical withdrawal symptoms were determined and documented at regular intervals during the first 2 days using the Clinical Institute Withdrawal Assessment (CIWA) scale. The patient’s highest score was 8 points (maximum possible: 67 points). On the first day abnormal findings were raised blood pressure (the highest was 160/90 mmHg), tachycardia (up to 108/min), and an increased tendency to sweat; these returned to within the reference range on the 2nd day. The patient’s blood pressure was normal throughout the rest of his stay. No medical treatment was needed for the autonomic withdrawal syndrome.

The patient applied for inpatient dehabituation therapy in order to continue his rehabilitation. We were able to discharge him after 21 treatment days in good general condition and with the potential for complete rehabilitation.

The easy availability of dextromethorphan markedly reduces the inhibition threshold—as seen in the case presented—to abuse this substance. Several of the negative consequences of obtaining prescription-only or illegal substances do not apply to over-the-counter substances. The patient does not need to obtain the substance on the black market or in the drugs world, or find a doctor who will write out prescriptions (3). As a result, There is no doctor to persuade the substance-dependent patient to undergo therapy or who can explain the dangers of the substance from a professional standpoint. These may be additional reasons why this patient remained unmotivated to seek treatment for so long. In addition, the lack of requirement for a prescription suggested to some extent that the substance was harmless.

In the case reported here, it was possible to motivate the patient to undergo qualified detoxification treatment by means of counseling and outside (non-self) motivation: his employer knew of the dependency. In the course of this treatment the patient was detoxified of dextromethorphan without complications.

Young people are among those at risk of taking substances with a psychoactive effect (14). For this reason, in addition to individual cases being discovered by physicians (or pharmacists) in practice, further interdisciplinary studies are needed for a better estimation of the situation.

Since no symptoms specific for dextromethorphan dependency are known, patients in whom primary care physicians suspect the existence of a dependency should be referred to a specialist addiction center.

On the basis of the data presented here, it should be considered whether dextromethorphan should be made prescription-only. This case history shows that even 100 years after the International Opium Commission was founded in Shanghai on 1 February 1909—one of the first steps in the international war against drug abuse, and the basis of our present-day Narcotics Law—politicians and the medical profession are constantly meeting new challenges in the fight against addictive illness. 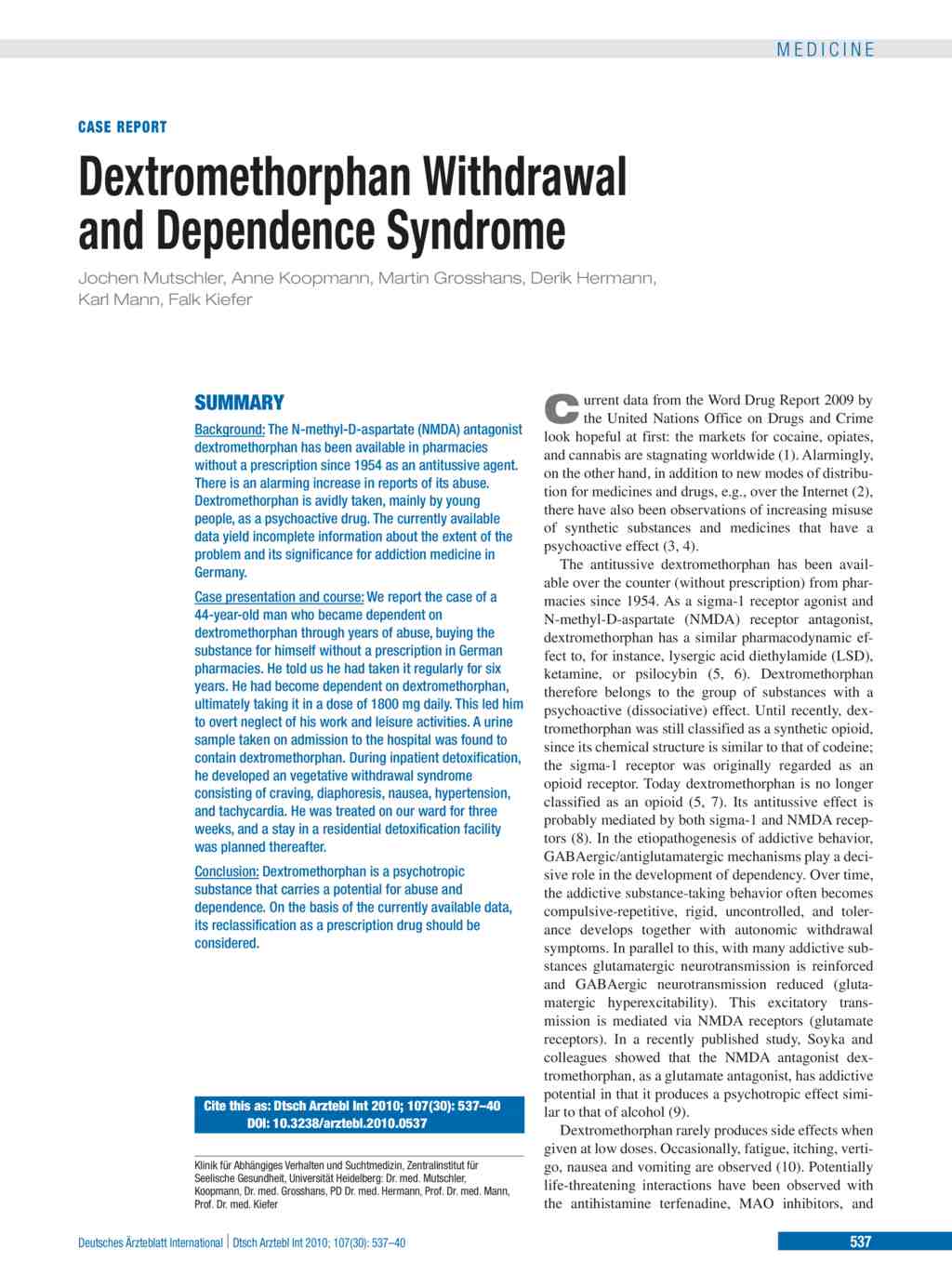