Medicine’s concept of human beings is a technocratic one. A substance that cannot be biotechnically captured disappears, because medical doctors are not interested.”

Most of the readers’ letters reflect this idea.

Breitenbürger rightly emphasizes the idea of the physician as the drug, but he also focuses on the scientific/rational principle as an important condition for a therapeutic approach. Whether it is really possible to save or even redirect financial resources by means of increased medical attention remains to be seen.

We neither called for nor did we consider a professional ban for practitioners of alternative and complementary medicine, as interpreted by Rapp. We only pointed out that placebo effects are probably partly or even wholly responsible for part of the effect of complementary and alternative therapeutic approaches, and we pointed out elsewhere that using placebos (within orthodox medicine!) may constitute a deception of the patient that may even have legal implications (2).

We do not agree with Reimann that use of placebos in orthodox medicine should be advocated; we merely wanted to emphasize the fact that a placebo effect is involved in the administration of active substances, and this should be exploited intentionally.

Rapp and Schiemer respectively interpret the use of a placebo effect as the intersection between complementary medicine and orthodox medicine. However, we wish to emphasize that subjectivity may play a part in the doctor-patient relationship, but that objectivity is one of the crucial mainstays of how doctors act. For this reason, the misunderstandings and prejudices that we allude to in the title of our article should be avoided as far as possible.

Minwegen mentions nocebo effects that may be triggered by adverse effects listed in the instructions for users. What is certainly of crucial importance here is how medical professionals impart this information or comment on it (3). In someone who has been instilled with a fear of the “harmful chemicals used in orthodox medicine” by medical outsiders, scientifically confirmed or practically tried and tested medications would not be as effective (if at all). Negative information that the patient gleans from their doctor, pharmacist, or the media may also trigger side effects.

Klippel adds to our literature search for the “placebo gene” by pointing out epigenetic factors. His definition of epigenetics seems to be broad based and includes the regulation of gene expression in general. Our own additional literature search using the search terms “epigenetics and placebo” did not yield any results.

We thank Schulz for his comments about the typical scenarios where complementary phytotherapies would be deployed. The high proportion of placebo effects in the overall effect of a treatment with an active substance is likely to be due to different causes for the different indications. The pronounced placebo effect in dementia is probably mainly a function of the ineffectiveness of the active substance.

Vetter underlines the numerous aspects that characterize the doctor-patient relationship. We also see therapeutic advantages when the whole person can be done justice in the therapeutic approach: conscious expectations can alleviate symptoms, even if those who receive the treatment are aware they are being given placebo (4). The “very small amount of extra time” we mentioned relates to short statements such as “this treatment has helped many people,” which by themselves may improve a patient’s responsiveness to a medical treatment.

Finally, we wish to draw attention to a small historical error on our part: Benjamin Franklin was the president of the constitutional convention of the then 13 United States of America and, with 54 other representatives, signed the US Declaration of Independence on 4 July 1776. He also held the position of the president of the Supreme Executive Council of Pennsylvania and remained in this post—which later corresponded to the office of the state governor—to 1 December 1788. His last act in office was to sign the constitution of the US (5). He was never president of the United States.

The authors thank all our correspondents for this opportunity to discuss the exciting topic that is “placebo. 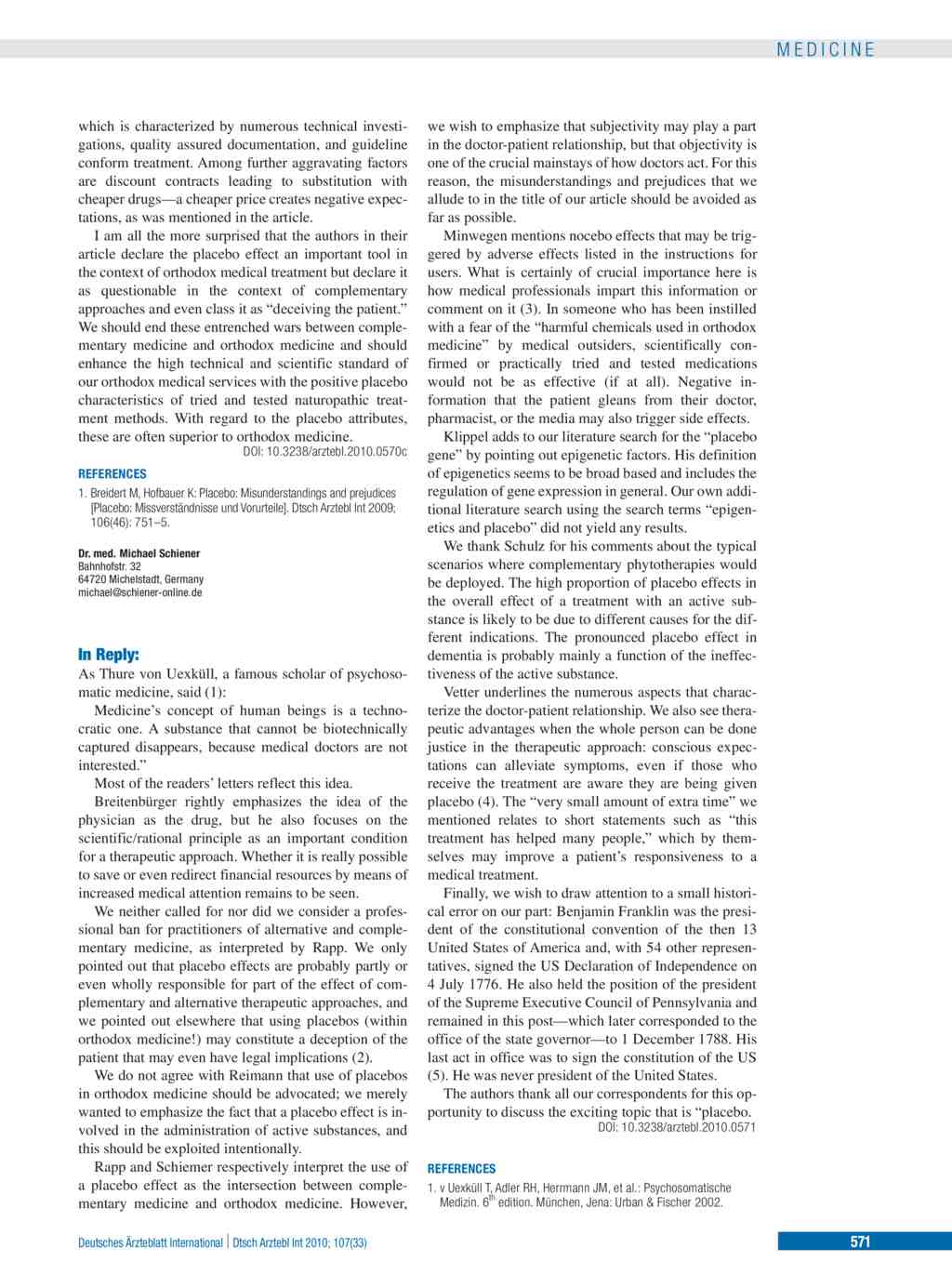