The article has some serious methodological flaws. Preoperative data about quality of life and sexuality are lacking in 72.9% of patients, and for the 2 year observation period after surgery, data are available for merely 18% of subjects. This seriously limits the evidence of the study, which can be classified neither as a prospective nor as a retrospective study.

The questionnaires do not do justice to impaired sexual functioning in both sexes. The Female Sexual Function Index (FSI) and the international Index of Erectile Function (IIEF) would have provided more adequate tools. Impaired innervation in women can be diagnosed on the basis of vaginal sensitivity, temperature perception , vibratory sensation, ability to experience vaginal orgasm, and lubrication (1).

Erectile dysfunction in men that has been persistently present for more than 2 years is a known problem and should be mentioned preoperatively. An early solution to the problem as well as advice are required. The authors’ assumption, that adjuvant radiotherapy does not affect ED, cannot be answered methodologically because observation periods of more than 2 years are required to assess the situation (2).

However, the assessment of bladder voiding disorder that is commonly associated with FSD by means of postoperative measurements of residual urine and micturition protocol is clinically justified (3).

We evaluated 58 men with rectal carcinoma while investigating a similar clinical question. The patients were treated according to their tumor stage with deep anterior rectal and mesorectal resection (AR) or abdominoperineal extirpation of the rectum(APR) by using the water jet short needle knife (flush knife) technique. The mean period of aftercare was 35 months. The effect on sexuality and bladder voiding function was evaluated by using validated questionnaires (International Prostate Symptom Score [IPSS], [IIEF-5]).

Impaired bladder voiding function necessitating therapy was not observed when the flush knife technique was used, independently of the surgical approach. ED requiring treatment occurred in 9 of 58 patients (15%) postoperatively . Using the flush knife technique in the context of rectal surgery enables neuroprotection of structures relevant to patients’ sexuality, in addition to incurring a lower degree of blood loss. 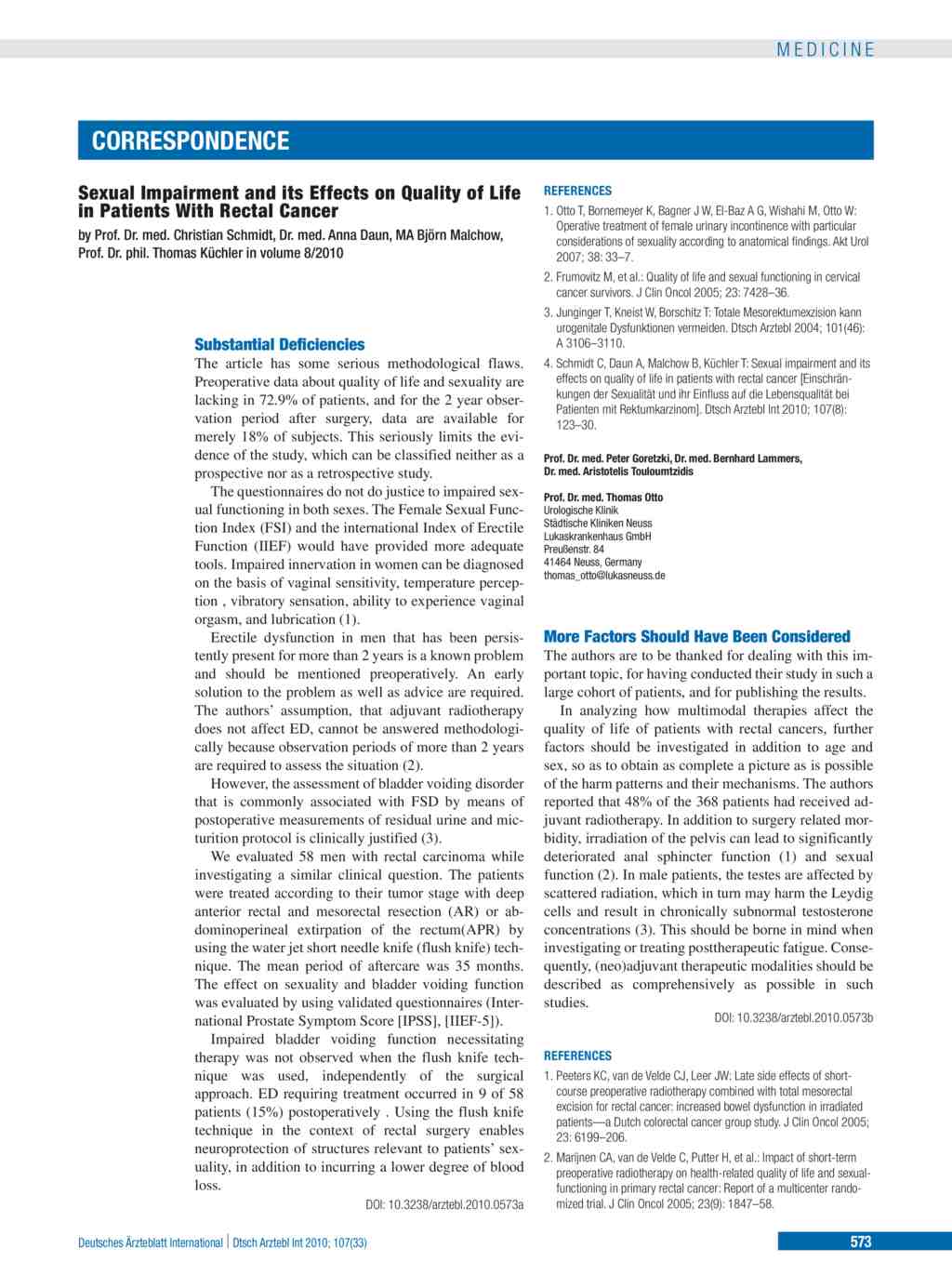