Strictly speaking, the impact factor was not assigned to Deutsches Ärzteblatt itself, but to the online journal that you are now reading, Deutsches Ärzteblatt International, which includes all of the articles published in German under the heading Medizin (“Medicine”) in full English translation. Thus, all of the medical-scientific articles that have undergone our review process are published in English in Deutsches Ärzteblatt International. The online sister publication was founded by Deutsches Ärzteblatt in 2008 so that our articles could be indexed in the major medical databases, such as Medline as well as, indeed, Web of Science and Journal Citation Report. This was by no means an end in itself: the purpose was, rather, to enable us to present our readers with scientific articles of even higher quality. It has become difficult for any journal that is not represented in the major databases to acquire good authors, researchers today being subject to the constant pressure of evaluations which, in turn, employ the impact factor as their main instrument. There is some debate at present about this type of evaluation, and about the impact factor itself (1–6). Nonetheless, no researcher and no editor of a scientific journal can afford to ignore the impact factor, as this ostensibly simple, and therefore alluring, statistic has already become immensely popular among the research bureaucracy.

We are glad, therefore, to be able to offer our authors not just the huge medical readership of Deutsches Ärzteblatt with its weekly circulation of 400 000 copies (which surely constitutes its true “impact”), but also bilinguality, visibility in Medline, and now an impact factor as well.

The new journal, Deutsches Ärzteblatt Internationl, is unusual for its bilinguality. Accordingly, the impact factor it has just received is unusual as well. As with all newly founded journals, the impact factor for the first year is a one-year impact factor, i.e., it is based on citations drawn from one publication year (2008, in this case), rather than two. Furthermore, problems arising from bilinguality unfortunately led to the lack of consideration of at least 69.6% (7) of all citations of scientific articles from Deutsches Ärzteblatt's section “Medicine” in other medical journals. This, along with the large number of letters to the editor that we are happy to publish, far more than in other journals, led to a non-representative distortion of the percentage of self-citations. In order to keep such artifacts from arising in the future, we kindly ask all authors of scientific papers to cite scientific articles from Deutsches Ärzteblatt exclusively in their English version. 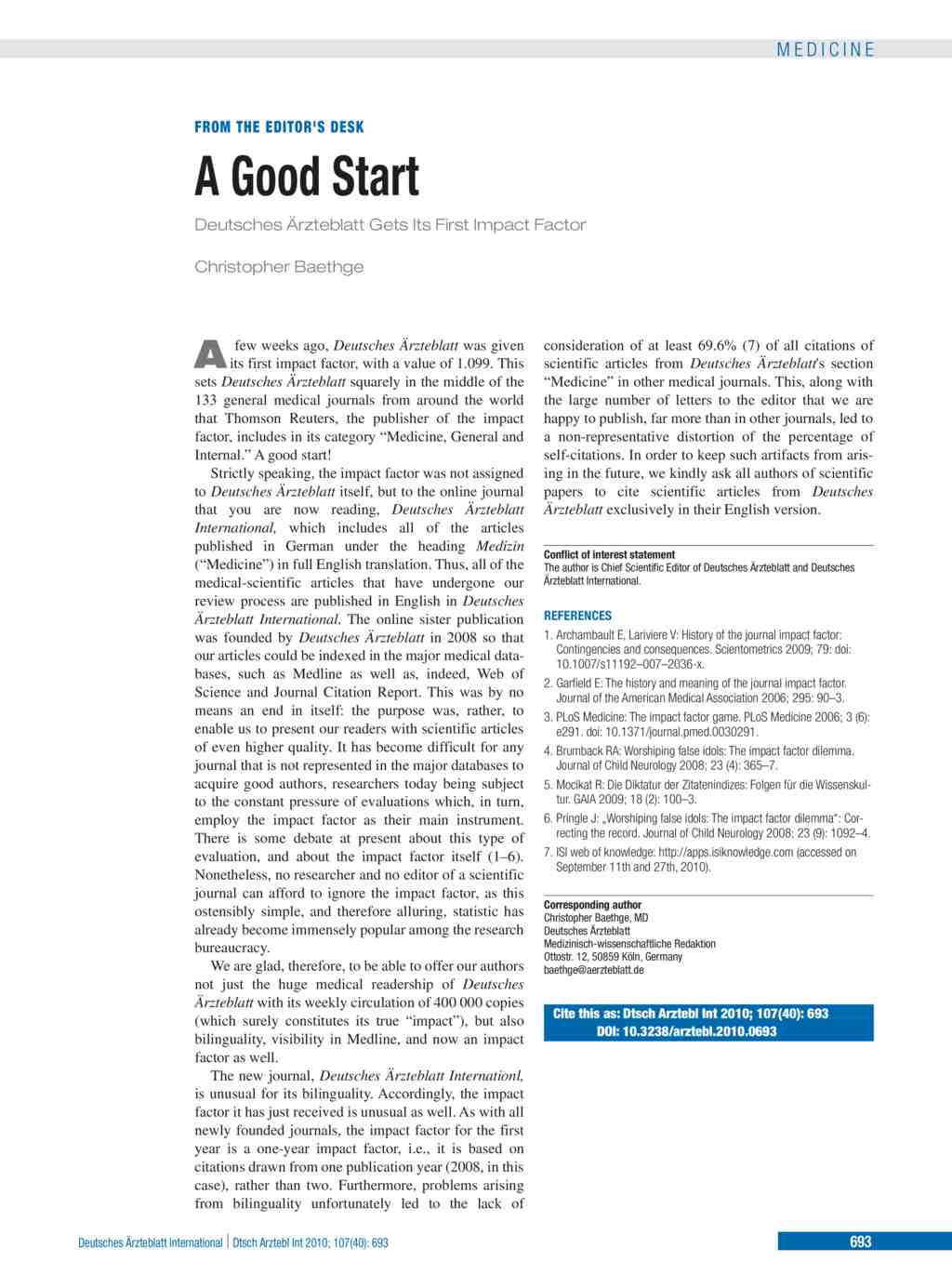