Background: A positive family history for myocardial infarction (MI) is known to be a major cardiovascular risk factor. The current European guidelines therefore recommend intensified primary prevention for the siblings and children of persons who have had an MI. Although the genes underlying the heritable component of MI were largely unknown previously, the development of new molecular genetic methods, and particularly the advent of genome-wide association (GWA) studies, has led to the discovery of numerous genetic variants that are associated with an elevated risk of MI.

Methods: In this article, we review GWA studies on MI and coronary heart disease (CHD) that were retrieved by a selective literature search from 2007 onward. We comment on their implications for clinical practice.

Results: In the last three years, GWA studies have enabled the identification of many alleles that confer a higher risk of MI. A total of eleven chromosomal regions have been replicated and associated with the disease, and their functional significance has been studied. Furthermore, it has been shown that some of the manifestations of CHD, e.g., calcification, ectasia and main-stem stenosis, are more strongly inherited than others.

Conclusion: The results of recent GWA studies for MI and CHD will aid in individual risk prediction for MI by molecular biological means. They will also permit the development of new approaches to research on the pathophysiology of myocardial infarction.

So-called candidate genes, i.e., molecular changes that lead to premature atherosclerosis, have been sought for the last two decades. All studies of this nature are based on the assumption that proteins involved in the pathophysiology of atherosclerosis carry mutations that make them a potential contributory cause of myocardial infarction. Although over 5000 publications have appeared in this field to date, only a few of them report a reproducible association of genes involved in lipid metabolism (Table 1 gif ppt) with an elevated risk of myocardial infarction (1).

From the genetic point of view, it should be pointed out that most candidate gene analyses have involved only one or a few of the many molecular variants of an individual gene. Moreover, a statistical problem besetting many such studies is the small size and heterogeneity of the sample. Thus, in retrospect, it comes as no surprise that only a small amount of valid data has been derived from studies of this type.

The breakthrough came in 2007 with the first use of genome-wide association (GWA) studies (Figure 1 gif ppt). This type of analysis enables the characterization of approximately 2.4 million genetic markers in each subject. A systematic comparison of these markers in thousands of patients with myocardial infarction and in healthy control subjects has enabled the identification of gene segments whose influence on the risk of atherosclerosis is considered to be established beyond any doubt (Table 2 gif ppt). Moreover, the main findings were replicated in many thousands of patients and control subjects. To date, the contribution of eleven chromosome segments (eleven genes) to the risk of myocardial infarction has been shown reproducibly and beyond doubt (2–8). This review article summarizes all of the GWA studies on myocardial infarction that have been published up to the present; these studies were found by a selective literature search (www.ncbi.nih.gov/pubmed).

The significance of the new myocardial infarction genes

An overview of the findings enables us to make the following basic statements:

Despite the enormous progress made in the last two years, only 10% of the genetic influence on myocardial infarction has been accounted for to date (3). Under the leadership of the Lübeck team, a globally operating consortium called CARDIoGRAM has been established, which collates the genome-wide association studies performed to date on a total of some 100 000 subjects, thus enabling a new quantitative dimension of analysis. The list of known and definitively evaluated genetic variants that are associated with myocardial infarction can be expected to become much longer in the near future.

The systematic, genome-wide analysis of cardiovascular risk factors has also led to the identification of many genes that influence lipid metabolism, arterial blood pressure, the risk of diabetes mellitus, and the tendency toward obesity. Thus, light has not just been shed on the genetics of myocardial infarction; it is now possible to predict more accurately, on a genetic basis, whether an individual will develop one of the classic cardiovascular risk factors over the course of a lifetime. Taking all of the data into consideration, one can conclude that it should now be possible to predict cardiovascular risk more accurately than is currently done on the basis of the family history alone (10). At present, large-scale epidemiological studies are being performed to determine whether the knowledge gained from GWA studies of myocardial infarction can improve the prognostication of future events beyond what is already possible from consideration of the traditional risk factors. If genetic information does turn out to have additional predictive value, then, in the future, it should be possible to develop risk scores that discriminate low-, middle-, and high-risk patients more accurately than currently possible, with the result that primary preventive measures can be applied in a more targeted fashion. We must await the results of these prospective studies before we can say whether the knowledge of the risk alleles that a person carries will lead to a clinically relevant improvement in our ability to predict myocardial infarction.

Coronary heart disease as a specific illness, and atherosclerosis in general, can affect patients in a variety of characteristic patterns. It has been demonstrated that the risk allele on chromosome 9p21.3 raises the risk not only of coronary heart disease, but also of stroke, aneurysms, and peripheral vascular occlusive disease (14, 15). These diseases probably all have their own, individual genetic risk factors, in addition to the common genetic risk factor that has been identified. Thus, a number of studies have revealed that calcification of the coronary arteries or of the aorta is subject to a major influence from genetic factors (16). Although no particular genetic factor of this type has yet been identified in man, the murine ABCC6 gene has been shown to cause vascular calcification by way of an abnormality of cellular transport (17, 18). It is hoped that a better understanding of the underlying mechanisms will help explain why some patients have severe vascular calcification and will lead the way toward effective prevention of this problem.

Coronary main-stem stenosis has been found to be a particularly heritable condition (Figure 4 gif ppt). That is, narrowing at the ostia or in the first centimetres of the right or left coronary artery is subject to a stronger genetic influence than more distally located stenosis. As a result, this highly dangerous manifestation of coronary heart disease also has a high rate of occurrence in siblings and other first-degree relatives of affected persons. Unfortunately, the mechanisms of inheritance of main-stem stenosis remains unknown. Thus, the relatives of affected persons can be advised at present only to have themselves thoroughly evaluated and to undertake a strict regimen to modify any risk factors that may be present.

These rapid developments in the discovery of molecular causes of myocardial infarction lead us to expect new means of risk prediction to become available in the near future. The current data show that most of these genetic effects operate independently of the traditional risk factors (lipid metabolism, arterial hypertension, diabetes, body-mass index, and smoking). The scientific data have already improved our ability to prognosticate the risk of myocardial infarction in a population sample, but it remains unclear at present whether knowledge of the associated genetic variants will be useful for risk prediction, and thus for prevention, for individual patients.

The findings described here have shed new light on the pathophysiology of myocardial infarction. In principle, genetic variants that confer risk are always to be considered as causal cofactors (like the risk alleles listed in Table 2), or even as precipitating factors (in the case of the autosomal dominant forms), of atherosclerosis and myocardial infarction. But how do these risk alleles work, if not by way of the traditional risk factors? Once the underlying mechanisms are deciphered, it will probably be possible to develop new methods of treating and preventing coronary heart disease. The current spirit of optimism among researchers in the field is reminiscent of the time when LDL-cholesterol had been identified as a risk factor for myocardial infarction, but no treatment was yet available to lower the associated risk. The total, summated effect of the genetic risk variants that have now been discovered seems to be far greater than that of an elevated LDL-cholesterol level. It remains to be seen, however, whether a better understanding of the genetics of myocardial infarction will lead to the development of new preventive measures whose effect will be comparable to that of the statins in lowering the risk due to high LDL-cholesterol. 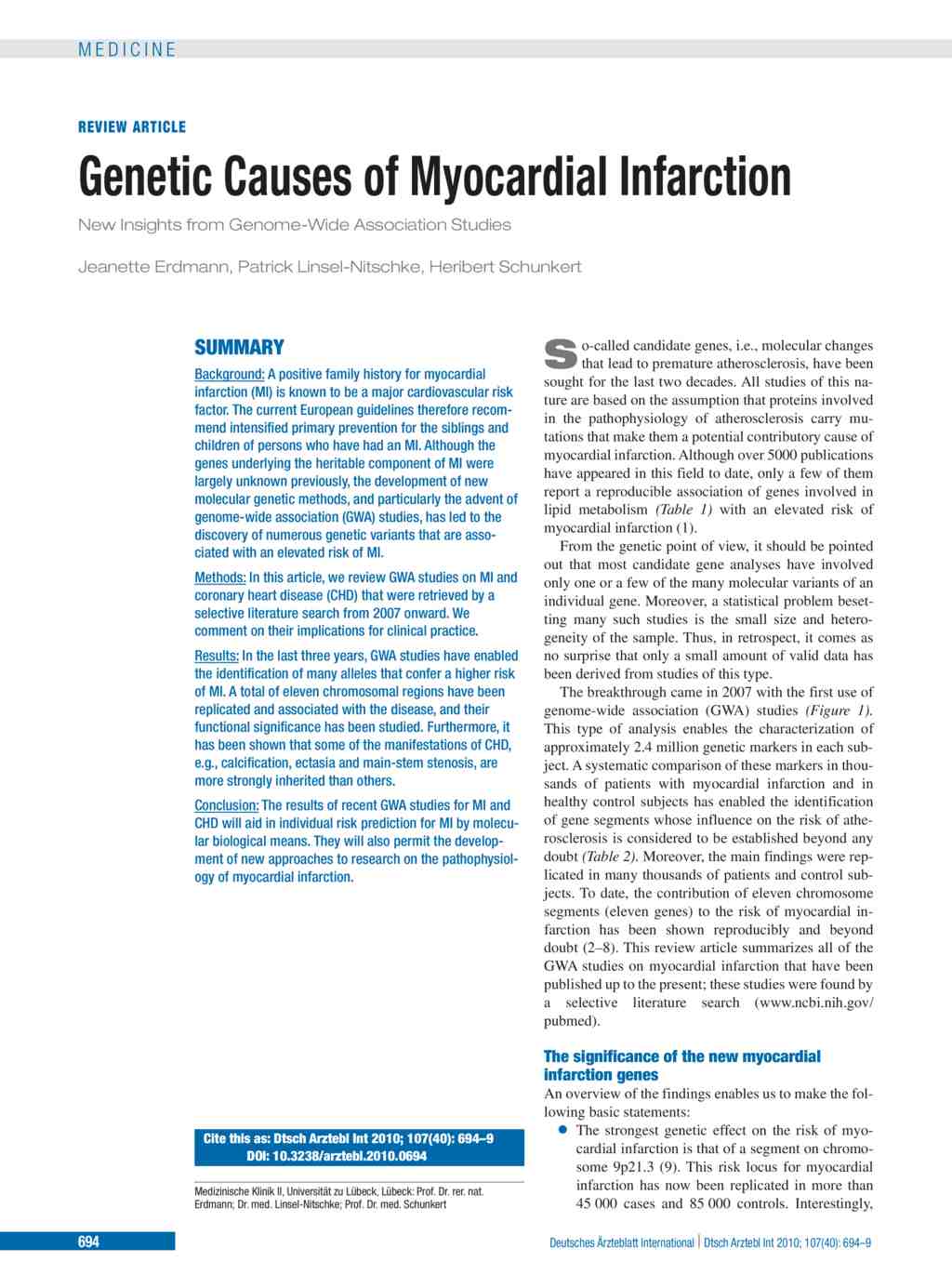