Risk Associated With Radon Is Overestimated

The main limitation of the article is the fact that radioactivity in tobacco smoke was not even mentioned. According to the US National Council on Radiation Protection and Measurement (NCRP report No. 95), such activity accounts for a radiation exposure of smokers’ lungs of more than 100 mSv. This means that even non-smokers are exposed to notable radiation in buildings where smoking is permitted. The substantial emission of plutonium by coal fired power stations, surely another possible factor of influence in radon studies (and an important task in occupational medicine) was not mentioned at all.

In the cited meta-analysis by Darby, the risk of lung malignancies in non-smokers aged 75 was reported to be 0.4%, 0.5%, and 0.7% for radon concentrations of 0 Bq/m3, 100 Bq/m3, and 400 Bq/m3; in smokers, the corresponding risk was about 25 times as high, at 10%, 12%, and 16%. For non-smokers, the difference is only 0.1% for exposures of 0–100 Bq/m3. The authors reported an average radon exposure in Germany of only 49 Bq/m3 (the natural values of outdoor air differ by up to 80 Bq/m3, according to the Federal Office for Radiation Protection (Bundesamt für Strahlenschutz), which means that a relevant influence in non- smokers cannot be shown and the role of radon as a relevant co-carcinogenic substance is questionable even in smokers.

As far as the allegedly linear dose-effect-relation is concerned, I missed a discussion of why in Iran, whose population’s natural radiation exposure reaches up to 200 mSv (the equivalent in Germany is 1–6 mSv), no increase in the incidence of malignancies has been found.

The measures stipulated for building construction do not have any relation to the threat posed by radon. The subsidies given to these would be better spent on smoking cessation programmes, although this would be associated with additional financial efforts, lower revenues from tobacco taxes, lacking stimulation of the building construction sector, and a higher burden on the pension and retirement funds—all owing to a relevant increase in life expectancy. 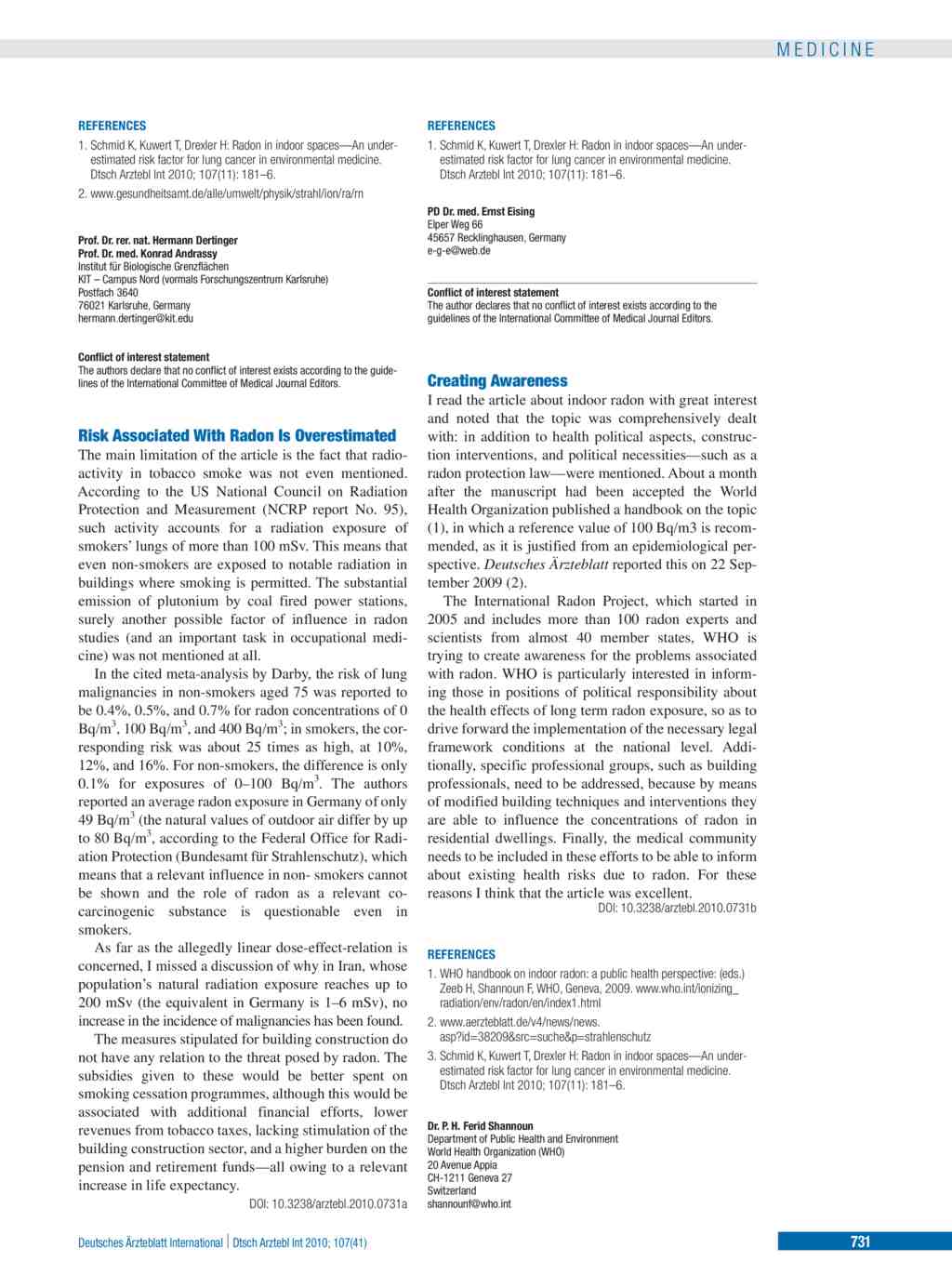