Early detection of colorectal carcinoma is a genuine precaution against colorectal cancer, because tumor precursors can be identified and removed. This means that invasive carcinoma can be prevented and incidence in the population can be reduced in the long term. However, when a new screening measure such as colonoscopy is introduced, there is a short-term increase in incidence, as more tumors are identified.

The effects of preventive colonoscopy

In their analysis, Brenner and his co-authors give impressive estimates of the numbers of carcinomas detected early by preventive colonoscopies and carcinomas prevented by removal of polyps during colonoscopy. In total, it was estimated that almost 150 000 cases of bowel cancer have been detected early or prevented in the eight years since the procedure was introduced. This is despite the fact that the annual rate of participation by those entitled is estimated at only 2.6%.

The limitations of interim assessment

The use of Markov models must be treated with great care, as the results of such modelling depend very much on the estimates used as the basis for the model. In addition, the data used for 2009 and 2010 in this article were projections, as the actual data were not yet available when analysis was performed. However, the authors used conservative estimates, and it can therefore be assumed that the results do approximately represent the actual effects of preventive colonoscopy in Germany in the first eight years since it was introduced. However, such projections cannot replace thorough scientific evaluation of colonoscopy screening, particularly as the effects of screening using the fecal occult blood test (FOBT) and curative colonoscopy remain unclear in this evaluation.

Also, current results of large randomized, controlled clinical trials on flexible sigmoidoscopy in the United Kingdom and Norway have been inconsistent (2, 3), probably due to the differing follow-up times of the two trials (11 versus 7 years). Other ongoing international randomized trials will end soon, and it would be wise to wait until they have been completed and incorporate their results into discussion of preventive colonoscopy in Germany.

The available data may reflect the beginning of a success story. However, there are still obstacles and problems which must be resolved. The greatest obstacle to performing colonoscopies on those with no symptoms most likely are the long and unpleasant preparations beforehand, such as cleansing of the bowel, and the potential risks of the procedure. The data that have now been evaluated show that the chances of the known risks, such as bleeding or perforation, are very low. If the results of Brenner and his co-authors are confirmed, in the future it may be possible to encourage significantly more of those entitled to undergo preventive colonoscopies, by providing them with evidence-based, comprehensible information on its risks and benefits.

The greatest current problem is the very low participation rate of those entitled to screening colonoscopy from the age of 55 (4). In order to reduce the incidence in the population, but also to protect individuals from bowel cancer, it is essential that as many of those entitled to bowel cancer screening as possible undergo it, ideally in the form of preventive colonoscopy.

According to all evaluations of which we are aware, the question of whether preventive colonoscopy in symptom-free members of the population in Germany is a success story so far can be answered in the affirmative.

However, an organized screening program with targeted invitations would be a positive step towards increasing participation. As is also being discussed as part of the National Cancer Plan of the German Health Ministry, such a program must include scientific evaluation using the best possible documentation, linkage with cancer registry data, and regular reporting. 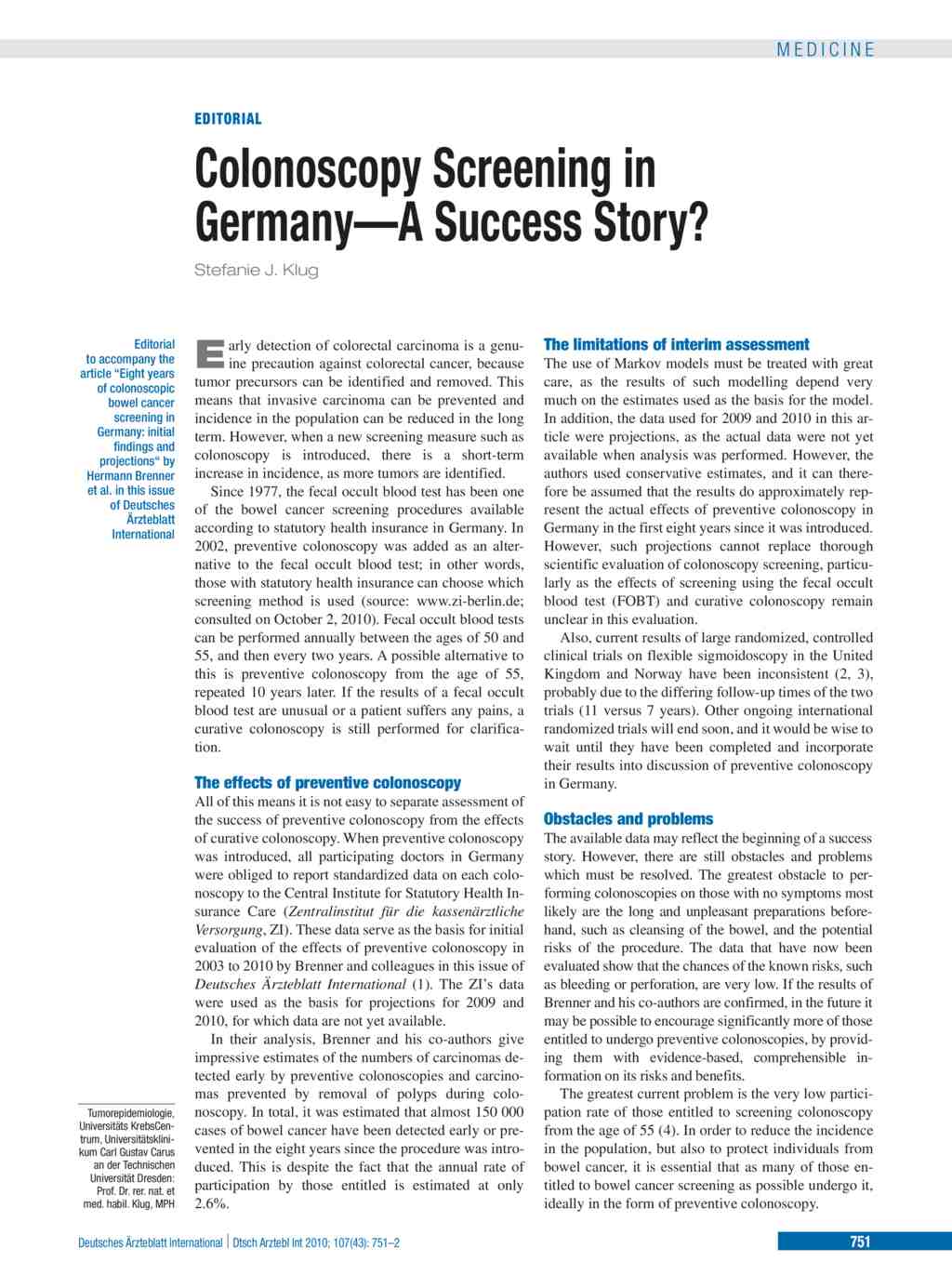