The Origins of Colorectal Carcinoma

Background: The widespread application of molecular methods in pathology has yielded steady advances in our understanding of the origins of colorectal carcinoma. Multiple pathways of carcinogenesis have been demonstrated on the molecular level and visualized on the histopathological level. The WHO has accordingly proposed a number of new designations and terms, particularly for precursor lesions, in order to establish a uniform standard for clinical diagnosis. These should be put into practice at once.

Methods: In this article, we explain the concept of intraepithelial neoplasia, which replaces the older concept of dysplasia. Moreover, we use this concept in describing a new mechanism of carcinogenesis for colorectal carcinoma, on the basis of a selective review of the literature. We estimate the frequency of precursor lesions according to the new concept using data from our own patient collective. Finally, we discuss the clinical consequences, which have been addressed in the German S3 guideline for colorectal carcinoma.

Results: The new type of precursor lesion, called “sessile serrated adenoma” (SSA), accounts for some 7% of all adenomas in our patient collective and is usually found in the right hemicolon. Traditional serrated adenomas (TSA) made up 1% to 3% of our cases and were found mainly in the left hemicolon and rectum.

Conclusion: Our observations on the frequency and location of serrated adenomas accord with the initial findings published in the international literature. In view of the risk that serrated lesions will progress more rapidly, it is recommended that they should be completely removed, with follow-up at a short interval thereafter (three years according to the German S3 guidelines).

The concepts of precursor lesions of adenocarcinomas of the gastrointestinal tract have significantly changed in recent years. While some innovations concern the whole digestive tract, other, new entities, for example in the colorectum, have also appeared. In this article, the term “intraepithelial neoplasia” (IEN) will generally be used to refer to the gastrointestinal tract as a whole. A new entity of precursor lesions of colorectal carcinoma is also described. This is discussed on the basis of the authors’ data and the results of a selective review of the literature.

While in the past the term “dysplasia” was used by pathologists and clinicians relatively heterogeneously, in recent years there has been a desire in Germany and abroad to use clear nomenclature. The terms “dysplasia”, “atypia” or “regenerative hyperplasia with atypia” should disappear from findings and be replaced by uniformly-defined terms.

According to the WHO’s recommendations, the term “intraepithelial neoplasia” (IEN) therefore refers not only to lesions in the esophagus, Barrett’s esophagus, stomach or duodenum, but also to those in the colorectum. The rest of this article considers the particular situation of the colorectum, in which precursor lesions (adenomas) with intraepithelial neoplasias of varying severity are one of the entities most commonly examined in pathology.

If an adenoma is not removed, adenoma cells continue to proliferate. On average, adenomas increase their volume by 52% in 2 years (2). Most adenomas are located in the rectum or the sigmoid colon (66% to 77%).

The incidence of HGIEN or invasive carcinoma in an adenoma is correlated with increasing adenoma size, increasing villous architecture (approximately 20% of villous/tubulovillous adenomas show HGIEN), occurrence of multiple adenomas and patient age (3, 4). For example, the incidence of invasive carcinomas in tubular adenomas measuring <1 cm is around 1% to 2%, whereas this increases to >50% in villous adenomas measuring >2 cm (4).

The primary key mutations for the alternative, serrated pathway are in the BRAF gene, with disruption to apoptosis of the crypt epithelia, followed by senescence with epigenetic methylation of promoters (CpG) and consecutive gene deletions (e.g. deletion of hMLH1, MGMT, p16), and usually high microsatellite instability (MSI-H). In the mixed type, the primary genetic aberration is KRAS mutation with secondary epigenetic methylation of promoters (CpG) and gene deletions, and there are also mutations of the APC and TP53; microsatellite status is either slightly unstable (MSI-L) or stable (MSS). This difference is therefore clinically relevant, as carcinomas which develop according to the alternative, serrated pathway are mostly located on the right or proximally and have a good prognosis, with a five-year survival rate of >70%, whereas the second subtype develops mainly on the left or distally and has an unfavorable prognosis, with a five-year survival rate <30% (8) (Figure gif ppt).

As the serrated pathway for colorectal carcinoma development may progress more rapidly, knowledge and diagnosis of precursor lesions are vitally important.

Typically, sessile serrated adenomas (SSAs) measure >5 mm, are located in the right colon, and are flat. They do not protrude into the gut lumen like polyps (10–13). SSAs are relatively difficult to identify via endoscopy. They can be distinguished from the surrounding area by a supporting mucous membrane. Because of their morphology and location, they could be a major cause of so-called interval carcinomas.

It is no longer disputed that SSA is a precursor lesion of the serrated carcinogenesis pathway. Differential diagnosis of HP and SSA rests on a typical overall picture with characteristic SSA criteria such as the following:

Unlike SSAs, traditional serrated adenomas (TSAs) are polypoid lesions which develop in the gut lumen. They combine the serrated architecture of hyperplastic polyps with the IEN of classical adenomas. They account for approximately 1% of all colorectal adenomas and are mainly located in the left colon or in the rectum.

Molecularly, TSAs are characterized by a high frequency of KRAS mutations (12).

The term “mixed polyp” covers a varied group of lesions which may include features of serrated adenomas, hyperplastic polyps and classical tubular, tubulovillous, or villous adenomas.

In general, the term “polyp” is ill-advised, as it does not reflect the preneoplastic nature of these lesions. However, international literature does use this term. The Gastrointestinal Pathology working group of the German Society of Pathology therefore recommends that the morphological components of the lesion should be stated first and the term “mixed polyp” given in brackets afterwards, e.g. “sessile serrated adenoma and tubular adenoma with low-grade intraepithelial neoplasia (mixed polyp)” (personal communication citation).

Hyperplastic polyps (HPs) are the most common type of colorectal polyp. They are located mainly in the rectum and the left colon and generally have a diameter <5 mm.

Hyperplastic polyps (HPs) are part of the hyperplastic subtype of the aberrant crypt focus. Some HPs, particularly lesions larger than 1 cm, are considered to be precursor lesions of TSA or SSA. A high proportion of these polyps have KRAS or BRAF mutations (11). It is thought that approximately 20% of all (larger) HPs located on the right-hand side progress to colorectal carcinomas. Endoscopic ablation should therefore be the target for these cases.

Do the location and morphology of entities affect diagnosis?

As differential diagnosis of precursor lesions as sessile serrated adenomas (SSAs) or traditional serrated adenomas (TSAs) is new, and criteria for diagnosis were not developed until recently, the question arises as to whether and to what extent lesions identified as hyperplastic polyps in the past would now be diagnosed as serrated lesions. As yet, the literature contains no unambiguous data on this. It is speculated that a high proportion of, in particular, hyperplastic polyps measuring more than 1 cm in the right hemicolon belong to the new category of serrated lesions now identified.

Only limited statements can be made on epidemiology and etiology, as several entities (e.g. sessile serrated adenoma) have only recently been defined. Our own data from 2008 may therefore not be representative. However, they can be used as comparative evidence.

In 2008, a total of 8211 patients in whom colon polyps had been detected endoscopically and for whom the diagnosis “adenoma” had been given or encoded were examined at the Institute of Pathology of the Ruhr University Bochum. There were 6819 diagnosed cases of “hyperplastic polyp” in Bochum in 2008, and naturally these were not classified as “neoplasia” or “adenoma.” As hyperplastic polyps do not present with intraepithelial neoplasia, they are benign and do not require any further clinical intervention.

At the Institute of Pathology of Dresden University Hospital, a total of 8452 colorectum biopsies were examined histologically in 2008. The diagnosis “adenoma” was given or encoded for 2814 of these biopsies.

Evaluation of the Bochum histological diagnoses showed that “classical” adenoma was diagnosed in 7226 cases, compared to a total of 2654 cases in Dresden. This gave a “classical adenoma” rate of 88% in Bochum and 94.5% in Dresden (Table 1 gif ppt).

In the Bochum collective, 482 of the 657 sessile serrated adenomas (73%) were located in the cecum, ascending colon, and transverse colon. 131 of the lesions (20%) were removed from the descending colon, sigmoid colon, and rectum. In 44 cases (7%), the location could not be stated retrospectively.

6.5% of the SSAs and 34.5% of the TSAs in Dresden presented with high-grade intraepithelial neoplasia/epithelial dysplasia.

Comparison of the frequencies of the entities from each collective shows that the diagnosis “sessile serrated adenoma” (SSA) seems to increase in the right hemicolon in particular. This increase in incidence is doubtlessly also caused by altered biopsy behavior of those performing endoscopies, who recognize the significance of lesions previously described as “hyperplastic polyps.”

Clinical consequences for treatment and precautions

According to the current S3 guideline of the German Society for Digestive and Metabolic Diseases (Deutsche Gesellschaft für Verdauungs- und Stoffwechselkrankheiten, DGVS), polyps (diameter <5 mm; no coagulation artifacts affecting histological evaluation) must be completely removed using forceps or a loop or by mucosal resection (diameter >5 mm) and sent separately for histological examination, stating the location of the polyps.

Following piecemeal ablation of flat or sessile adenomas, the recurrence rate is significantly higher, particularly with larger adenomas (9% to 28%). The group of patients treated in this way should receive a follow-up colonoscopy at short intervals because of the increased rate of local recurrence or of metachronous lesions: first after 2 to 6 months, then after 3 years, and then after 5 years, or sooner for individual patients if needed.

For larger (≥1 cm) sessile serrated adenomas, particularly those on the right-hand side (previously classified as hyperplastic polyps), there seems to be a potential risk of accelerated progression to carcinoma (following the serrated carcinogenesis pathway). Complete removal and short follow-up intervals are therefore recommended in these cases (after 3 years according to current knowledge).

The follow-up care recommended after ablation of TSAs, which mainly develop in the left colon, is similar to that for SSA, due to an increased risk of progression.

In the event of incomplete or piecemeal ablation (edges impossible to identify with certainty using histological techniques), the follow-up interval for the biopsy site must be short. In these cases too, the target follow-up interval should be 2 to a maximum of 6 months.

In studies from the English-speaking world, the significance of the recommendation of the German guideline is discussed frequently, and the biopsy/ablation of precursor lesions larger than 1 cm in the colorectum is recommended. For these cases in particular, the way should be paved for virtual colonoscopy methods, which are not well accepted, at least in Germany, because of the lack of histological confirmation. In one current study (14), which recommends that lesions measuring less than 1 cm should not be biopsied or should be left in situ, the histological findings are extremely difficult to interpret, as serrated precursor lesions account for less than 1%. 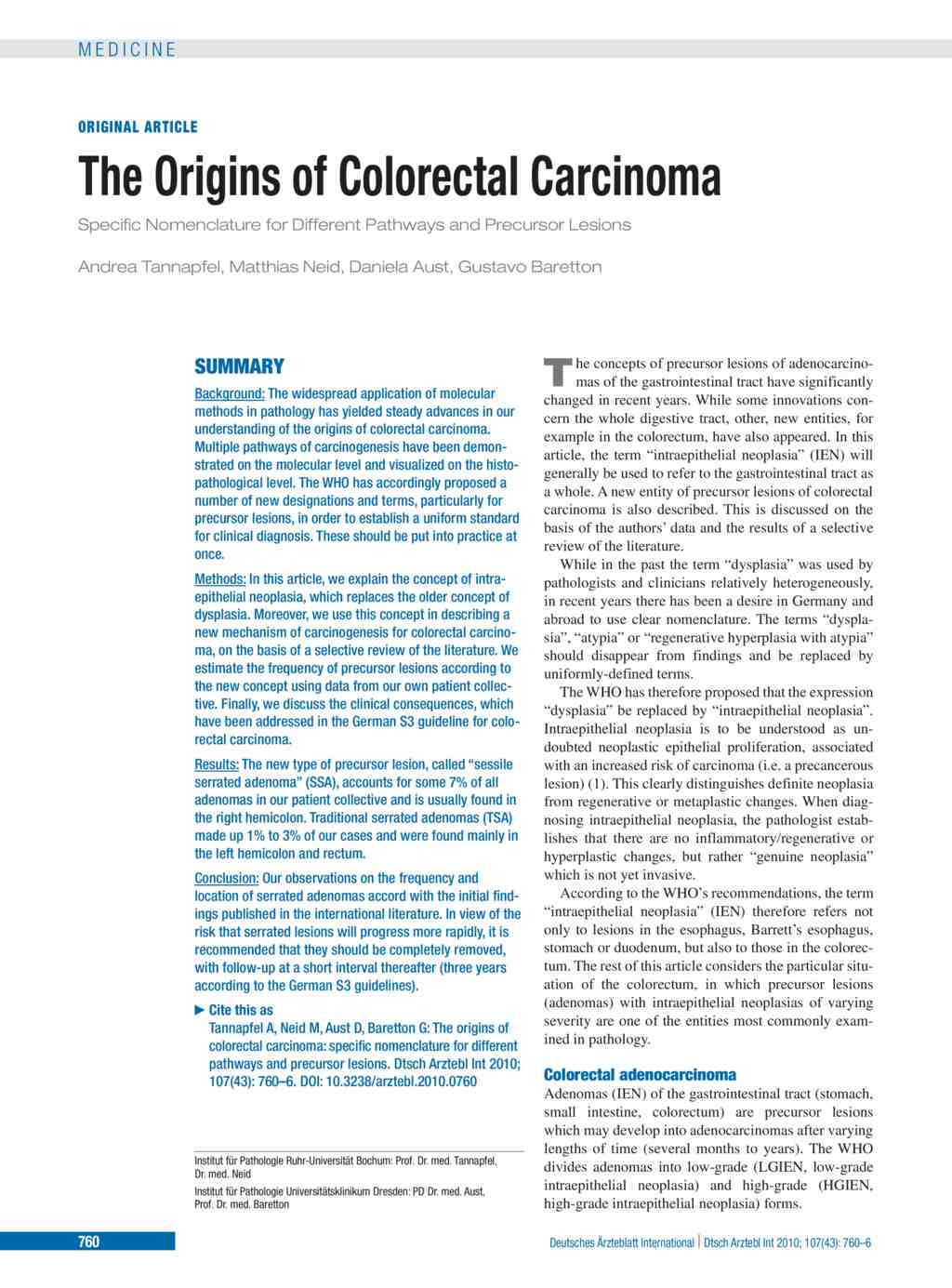