Part 14 of a Series on Evaluation of Scientific Publications

Methods: This article is based on selected textbooks of statistics, a selective review of the literature, and our own experience.

Results: After a brief introduction of the uni- and multivariable regression models, illustrative examples are given to explain what the important considerations are before a regression analysis is performed, and how the results should be interpreted. The reader should then be able to judge whether the method has been used correctly and interpret the results appropriately.

The purpose of statistical evaluation of medical data is often to describe relationships between two variables or among several variables. For example, one would like to know not just whether patients have high blood pressure, but also whether the likelihood of having high blood pressure is influenced by factors such as age and weight. The variable to be explained (blood pressure) is called the dependent variable, or, alternatively, the response variable; the variables that explain it (age, weight) are called independent variables or predictor variables. Measures of association provide an initial impression of the extent of statistical dependence between variables. If the dependent and independent variables are continuous, as is the case for blood pressure and weight, then a correlation coefficient can be calculated as a measure of the strength of the relationship between them (Box 1 gif ppt).

Regression analysis is a type of statistical evaluation that enables three things:

Regression analysis employs a model that describes the relationships between the dependent variables and the independent variables in a simplified mathematical form. There may be biological reasons to expect a priori that a certain type of mathematical function will best describe such a relationship, or simple assumptions have to be made that this is the case (e.g., that blood pressure rises linearly with age). The best-known types of regression analysis are the following (Table 1 gif ppt):

The goal of this article is to introduce the reader to linear regression. The theory is briefly explained, and the interpretation of statistical parameters is illustrated with examples. The methods of regression analysis are comprehensively discussed in many standard textbooks (1–3).

Cox regression will be discussed in a later article in this journal.

The dependent variable Y must be continuous, while the independent variables may be either continuous (age), binary (sex), or categorical (social status). The initial judgment of a possible relationship between two continuous variables should always be made on the basis of a scatter plot (scatter graph). This type of plot will show whether the relationship is linear (Figure 1 gif ppt) or nonlinear (Figure 2 gif ppt).

Performing a linear regression makes sense only if the relationship is linear. Other methods must be used to study nonlinear relationships. The variable transformations and other, more complex techniques that can be used for this purpose will not be discussed in this article.

In a fictitious study, data were obtained from 135 women and men aged 18 to 27. Their height ranged from 1.59 to 1.93 meters. The relationship between height and weight was studied: weight in kilograms was the dependent variable that was to be estimated from the independent variable, height in centimeters. On the basis of the data, the following regression line was determined: Y= –133.18 + 1.16 × X, where X is height in centimeters and Y is weight in kilograms. The y-intersect a = –133.18 is the value of the dependent variable when X = 0, but X cannot possibly take on the value 0 in this study (one obviously cannot expect a person of height 0 centimeters to weigh negative 133.18 kilograms). Therefore, interpretation of the constant is often not useful. In general, only values within the range of observations of the independent variables should be used in a linear regression model; prediction of the value of the dependent variable becomes increasingly inaccurate the further one goes outside this range.

The regression coefficient of 1.16 means that, in this model, a person’s weight increases by 1.16 kg with each additional centimeter of height. If height had been measured in meters, rather than in centimeters, the regression coefficient b would have been 115.91 instead. The constant a, in contrast, is independent of the unit chosen to express the independent variables. Proper interpretation thus requires that the regression coefficient should be considered together with the units of all of the involved variables. Special attention to this issue is needed when publications from different countries use different units to express the same variables (e.g., feet and inches vs. centimeters, or pounds vs. kilograms).

Figure 3 shows the regression line that represents the linear relationship between height and weight.

Linear regression can be used to estimate the weight of any persons whose height lies within the observed range (1.59 m to 1.93 m). The data set need not include any person with this precise height. Mathematically it is possible to estimate the weight of a person whose height is outside the range of values observed in the study. However, such an extrapolation is generally not useful.

When categorical variables are used, the reference category should be defined first, and all other categories are to be considered in relation to this category.

The coefficient of determination, r2, is a measure of how well the regression model describes the observed data (Box 2 gif ppt). In univariable regression analysis, r2 is simply the square of Pearson’s correlation coefficient. In the particular fictitious case that is described above, the coefficient of determination for the relationship between height and weight is 0.785. This means that 78.5% of the variance in weight is due to height. The remaining 21.5% is due to individual variation and might be explained by other factors that were not taken into account in the analysis, such as eating habits, exercise, sex, or age.

Just as in univariable regression, the coefficient of determination describes the overall relationship between the independent variables Xi (weight, age, body-mass index) and the dependent variable Y (blood pressure). It corresponds to the square of the multiple correlation coefficient, which is the correlation between Y and b1 × X1 + ... + bn × Xn.

It is better practice, however, to give the corrected coefficient of determination, as discussed in Box 2. Each of the coefficients bi reflects the effect of the corresponding individual independent variable Xi on Y, where the potential influences of the remaining independent variables on Xi have been taken into account, i.e., eliminated by an additional computation. Thus, in a multiple regression analysis with age and sex as independent variables and weight as the dependent variable, the adjusted regression coefficient for sex represents the amount of variation in weight that is due to sex alone, after age has been taken into account. This is done by a computation that adjusts for age, so that the effect of sex is not confounded by a simultaneously operative age effect (Box 4 gif ppt).

In this way, multivariable regression analysis permits the study of multiple independent variables at the same time, with adjustment of their regression coefficients for possible confounding effects between variables.

Multivariable analysis does more than describe a statistical relationship; it also permits individual prognostication and the evaluation of the state of health of a given patient. A linear regression model can be used, for instance, to determine the optimal values for respiratory function tests depending on a person’s age, body-mass index (BMI), and sex. Comparing a patient’s measured respiratory function with these computed optimal values yields a measure of his or her state of health.

In the following sections, we will discuss how these problems can be circumvented.

The selection of variables

Variable selection should be carried out on the basis of medical expert knowledge and a good understanding of biometrics. This is optimally done as a collaborative effort of the physician-researcher and the statistician. There are various methods of selecting variables:

Forward selection is a stepwise procedure that includes variables in the model as long as they make an additional contribution toward explaining Y. This is done iteratively until there are no variables left that make any appreciable contribution to Y.

Stepwise selection combines certain aspects of forward and backward selection. Like forward selection, it begins with a null model, adds the single independent variable that makes the greatest contribution toward explaining the dependent variable, and then iterates the process. Additionally, a check is performed after each such step to see whether one of the variables has now become irrelevant because of its relationship to the other variables. If so, this variable is removed.

The evaluation of a regression model requires the performance of both forward and backward selection of variables. If these two procedures result in the selection of the same set of variables, then the model can be considered robust. If not, a statistician should be consulted for further advice.

The study of relationships between variables and the generation of risk scores are very important elements of medical research. The proper performance of regression analysis requires that a number of important factors should be considered and tested:

Before a regression analysis is performed, the causal relationships among the variables to be considered must be examined from the point of view of their content and/or temporal relationship. The fact that an independent variable turns out to be significant says nothing about causality. This is an especially relevant point with respect to observational studies (5).

The number of cases needed for a regression analysis depends on the number of independent variables and of their expected effects (strength of relationships). If the sample is too small, only very strong relationships will be demonstrable. The sample size can be planned in the light of the researchers’ expectations regarding the coefficient of determination (r2) and the regression coefficient (b). Furthermore, at least 20 times as many observations should be made as there are independent variables to be studied; thus, if one wants to study 2 independent variables, one should make at least 40 observations.

Missing values are a common problem in medical data. Whenever the value of either a dependent or an independent variable is missing, this particular observation has to be excluded from the regression analysis. If many values are missing from the dataset, the effective sample size will be appreciably diminished, and the sample may then turn out to be too small to yield significant findings, despite seemingly adequate advance planning. If this happens, real relationships can be overlooked, and the study findings may not be generally applicable. Moreover, selection effects can be expected in such cases. There are a number of ways to deal with the problem of missing values (6).

A further important point to be considered is the composition of the study population. If there are subpopulations within it that behave differently with respect to the independent variables in question, then a real effect (or the lack of an effect) may be masked from the analysis and remain undetected. Suppose, for instance, that one wishes to study the effect of sex on weight, in a study population consisting half of children under age 8 and half of adults. Linear regression analysis over the entire population reveals an effect of sex on weight. If, however, a subgroup analysis is performed in which children and adults are considered separately, an effect of sex on weight is seen only in adults, and not in children. Subgroup analysis should only be performed if the subgroups have been predefined, and the questions already formulated, before the data analysis begins; furthermore, multiple testing should be taken into account (7, 8).

5. The selection of variables

Linear regression is an important tool for statistical analysis. Its broad spectrum of uses includes relationship description, estimation, and prognostication. The technique has many applications, but it also has prerequisites and limitations that must always be considered in the interpretation of findings (Box 5 gif ppt).

Translated from the original German by Ethan Taub, MD 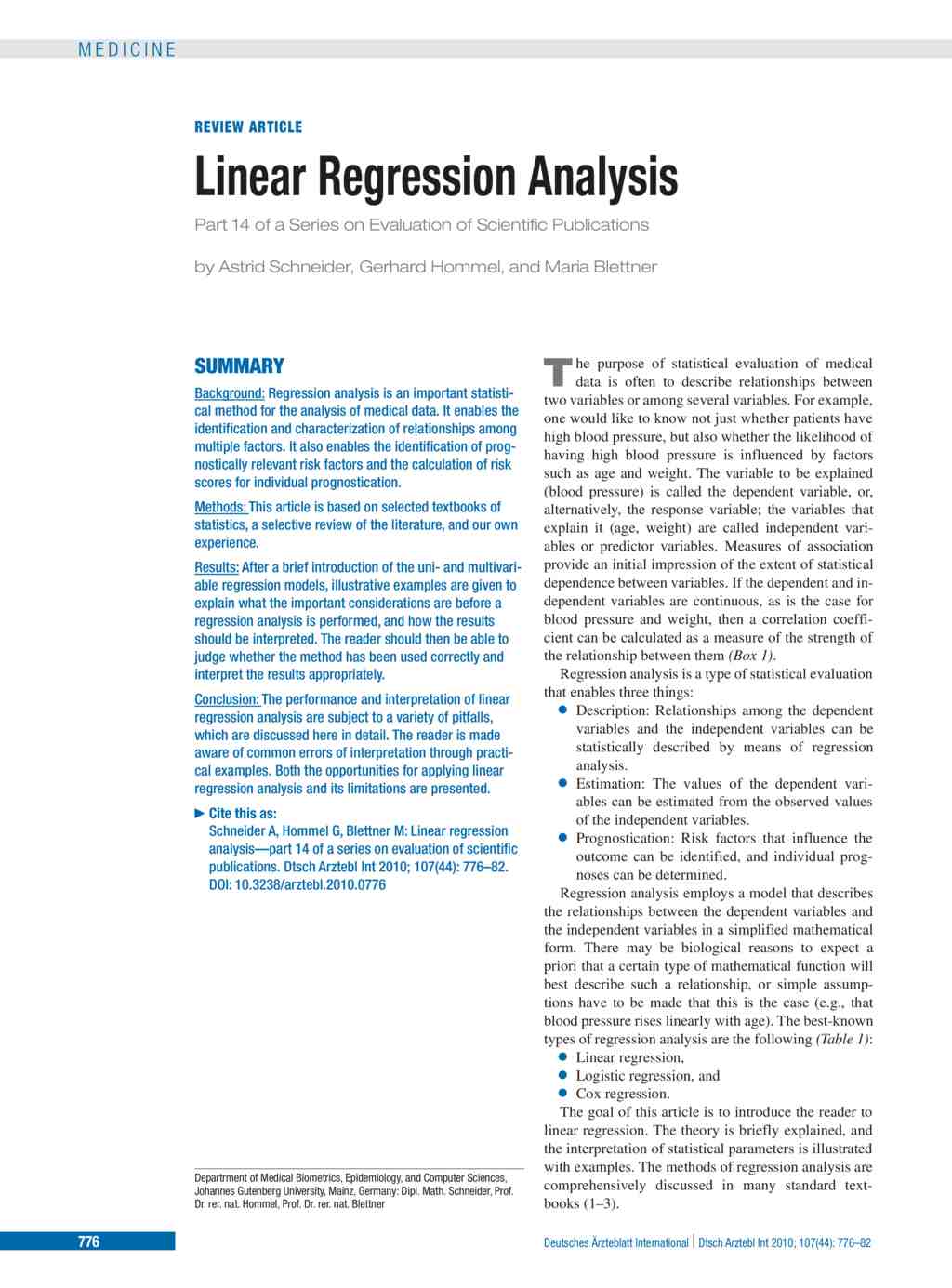