Background: Hypothyroidism and hypocalcemia are common after thyroid and parathyroid surgery. In this article, the authors provide clinically-oriented recommendations to help surgeons, general practitioners, internists, and endocrinologists give their affected patients adequate hormone replacement therapy.

Methods: Selective evaluation of original articles and reviews that were retrieved by a PubMed search over the years 1980 to 2010, as well as of the recommendations of medical societies including the Endocrine Society (USA), the German Society for Endocrinology (Deutsche Gesellschaft für Endokrinologie), and the American and European Thyroid Associations.

Results: Important issues in L-thyroxine replacement therapy include: the selection of the hormone preparation (T4 or T4/T3), combination with iodine (yes/no), the definition of therapeutic TSH ranges (particularly after surgery for thyroid cancer), the extent of remaining thyroid tissue after goiter surgery and its significance, underlying diseases, and drug interactions. The major issues in the treatment of postoperative hypoparathyroidism are: the selection of suitable calcium and vitamin D preparations, the definition of therapeutic goals, the treatment of hypercalciuria and hyperphosphatemia, and the option of recombinant parathormone therapy.

Conclusion: Effective treatment requires an appropriate choice of medication and an understanding of its pharmacokinetics as well as of the possible effects of the patient’s underlying disease, comorbidities, and other medications on its absorption and metabolism.

Hormone replacement after thyroid and parathyroid surgery is a common clinical challenge. The initiation of hormone replacement therapy is not always a simple matter (e1), as it often overlaps with the transition from inpatient to outpatient care (i.e., from surgery and the immediate postoperative period to the period of ambulatory follow-up), and hormone replacement is either begun or continued by physicians from multiple specialties (surgery, internal medicine, family medicine). Permanent hypothyroidism arises not only after total or subtotal thyroidectomy, but also in 11% to 28% of patients that have undergone hemithyroidectomy (e2–e4). Risk factors for permanent hypothyroidism include seropositivity for TPO (thyroid peroxidase) antibodies, high normal preoperative TSH (thyroid stimulating hormone) levels, and histologically confirmed thyroiditis, but not age, sex, family history, or weight of the resected tissue (e1, e4). Patients who were in euthyroid status before they underwent elective surgery may need a change of their hormone dose afterward depending on the extent of the procedure, even if they are receiving replacement therapy that is closely adapted to body weight: this is true in 17% to 42% of cases (for hemithyroidectomy and subtotal thyroidectomy, respectively) (1, e1).

The goal of this review article is to give practical recommendations for hormone replacement therapy that will be of use to physicians from all of the involved specialties, including surgery, general practice, internal medicine, and endocrinology.

The recommendations given here are based on an assessment of selected scientific publications and review articles retrieved from the PubMed database, and of the recommendations of the following medical societies: the Endocrine Society (United States), the German Society for Endocrinology (Deutsche Gesellschaft für Endokrinologie, DGE), the American Thyroid Association (ATA), and the European Thyroid Association (ETA).

For a physiological understanding of the recommendations on hormone replacement therapy (2), one must bear in mind the hierarchical functional arrangement of the thyrotropic axis, as shown in the Figure (gif ppt). The indispensable basis of effective thyroid hormone replacement therapy is the clinical biochemical measurement of TSH and, in some cases, of fT4 and fT3. Table 1 (gif ppt) provides an aid to the interpretation of various constellations of hormone levels. TSH levels should be measured exclusively with modern third- and fourth-generation assays (e5) whose analytic sensitivity is under 0.01 mIU/L; such assays are universally available in Germany today. For TSH and the free thyroid hormones, attention should be paid to the relevant normal ranges and units (3).

The pharmacokinetics of thyroid hormones

A proper understanding of the pharmacokinetics of thyroid hormones (4) is essential for treatment planning. When T4 is taken orally, up to 80% of it is absorbed, and the peak serum concentration is reached two to four hours after ingestion. The serum concentration then rises by 20% to 40%. The half-life of T4 is relatively long, at 190 hours. A fatty meal lowers its absorption by 40% (e6), and even drinking coffee lowers its absorption by 27% to 36% (e7). Consequently, thyroid hormone must be taken in the fasting state, with water, 30 to 60 minutes before breakfast (e6). The absorption of T3 is 90%, and peak levels are reached one to two hours after ingestion. The serum concentration may rise by 250% to 600%. T3 has a relatively short half-life of only 19 hours.

The required amount of L-thyroxine

In view of the physiological, pharmacokinetic, and clinical biochemical considerations outlined above, ten tips can be given for clinical practice (2, 5–8):

Substitution of T4, T3, or iodide

In the following paragraphs, we will consider the various standard postoperative situations one by one and describe the mode of replacement therapy that is recommended for each in the relevant guidelines (2, 7, 13–17).

After surgery for a diffuse or nodular goiter

Note: The 6 mL threshold for the amount of residual tissue is a clinical rule of thumb. Other important considerations include functionality (pattern on ultrasound examination), age, and body weight.

After surgery for an autoimmune disease of the thyroid gland (Graves’ disease, Hashimoto’s thyroiditis)

After total thyroidectomy for papillary or follicular thyroid carcinoma (2, 13–16)

The TSH target range after surgery for well-differentiated thyroid carcinoma

The appropriate target range for TSH (13) depends on the patient’s risk class, the time elapsed from the onset of the disease to its diagnosis, and the presence or absence of persistent disease. A summary of appropriate TSH target ranges, modified in accordance with the ATA and ETA guidelines, is given in Box 1 gif ppt (2, 13–16).

The question of L-thyroxine allergy or intolerance

Allergy to the naturally occurring human hormone L-thyroxine does not exist. Antibodies against T4 have been described in rare cases of autoimmune disease (e29), but these antibodies are not sought as a routine diagnostic measure. They do not cause any clinical manifestations but might potentially interfere with diagnostic testing or with regulatory circuits, or necessitate a higher dose of hormone replacement. Various components of the L-thyroxine preparations aside from the hormone itself can, however, give rise to allergy or intolerance; when this occurs, switching to another preparation may help. The switch can be performed systematically, guided by a knowledge of the substances other than L-thyroxine that are present in the different preparations, as these vary widely from one preparation to another. Helpful information of this type is provided in Box 2 (gif ppt), which is based on the information for physicians provided with each preparation (Rote Liste [“Red List,” a German guide to medications], 2009). Rarely, further diagnostic testing will be needed, with the aid of specialists in allergology and dermatology. In general, when medication intolerance is suspected, the first step is to separate L-thyroxine from iodide supplementation by withholding the latter temporarily for diagnostic purposes, as iodide, which is present in many combined preparations, is much more likely to be poorly tolerated than L-thyroxine. Another diagnostic possibility is lactose intolerance, a history of which should be sought from the patient. This can cause meteorism, flatulence, and abdominal cramps.

If some time has elapsed since surgery, the following laboratory values should be determined: serum calcium and albumin (correction of the calcium level with Payne’s formula in case of hypoalbuminuria), ionized calcium, magnesium, creatinine, phosphate, parathormone, and 25-OH-cholecalciferol. On the other hand, if symptomatic hypocalcemia arises shortly after surgery, the differential diagnosis is usually a simple matter.

The goals of treatment (18–20) are elimination of the symptoms and signs of hypoparathyroidism (paresthesiae, muscle cramps, convulsions, stridor, cognitive impairment, abnormal QT interval on ECG), a serum calcium level in the low normal range (2.0 to 2.1 mmol/L), a calcium × phosphate product below 5 mmol2/L2 to prevent calcium phosphate precipitation in the eye/lens, kidneys, and basal ganglia, and reduction of hypercalciuria to less than 300 mg of calcium in a 24-hour urine sample to prevent nephrotoxicity and kidney stones. Once the desired levels have been reached, the serum calcium, phosphate, and creatinine concentrations and the urinary calcium concentration should be rechecked every six months, and an annual ophthalmological examination is recommended for the early detection of cataracts (18). The principles of treatment (18, 19) include oral calcium supplementation (or, in an emergency, intravenous administration of calcium) as well as the oral administration of vitamin D derivatives. Other medications that can be given for special indications include phosphate binders (for refractory hyperphosphatemia) and thiazide diuretics (for refractory hypercalciuria).

The main agents used for oral calcium supplementation (18) are two calcium salts: calcium carbonate and calcium citrate (20–22). The dose is 500 to 1500 mg of elemental calcium daily. Calcium carbonate is most effectively absorbed when the gastric juice has an acidic pH; calcium citrate is thus preferable in the setting of achlorhydria or acid-suppressing therapy. For emergency intravenous treatment (18), a 10% solution of calcium gluconate is available (10 mL of the 10% solution contains 2.25 mmol of calcium, or 90 mg of calcium ions). In patients with hypoparathyroidism, intravenously administered calcium is effective for only two to three hours (continuous infusion: 1 to 3 mg of calcium gluconate per kilogram of body weight per hour in 5% glucose solution, or else 10 ampoules of 10% calcium gluconate in 500 mL of 5% glucose given over 12 hours through a mechanized infusion pump).

Vitamin D preparations are the mainstay of treatment for postoperative hypoparathyroidism (18) and are usually a necessary accompaniment to calcium supplementation. The optimal dose varies markedly among individuals, and it is also important to choose correctly among the various vitamin D preparations that are available (23, e36).

Ergocalciferol (vitamin D2) and cholecalciferol (vitamin D3) are commercially available in the USA and Germany, respectively, yet they are not recommended for treatment because their long half-lives increase the risk of intoxication, and also because of their unfavorable on/off kinetics (10–14 days and 14–75 days, respectively) (18). Nor does treatment with these two preparations make any sense from the pathophysiological point of view, because native vitamin D3 (cholecaliferol, which is given to treat osteoporosis) is activated by a double hydroxylation, first in the liver at position 25 and then again, in a parathormone-dependent process, in the kidney at position 1. It thus cannot be converted to an active form when hypoparathyroidism is the underlying problem.

Three preparations are appropriate for use and are available in Germany: 1α-hydroxy-cholecalciferol (alpha-calcidiol), 1,25-dihydroxy-cholecalciferol (calcitriol), and the synthetic vitamin D analogue dihydrotachysterol. The main features of these three preparations are summarized in Table 4 (18, 20, 24, e36). Calcitriol (24) is the most commonly used preparation (18, 20); it is the most active vitamin D metabolite (23), has the best on/off kinetics (half-life 4 to 6 hours), is easy to dose, and needs no endogenous activation by hydroxylation (which is important in the setting of parathormone deficiency and impaired hepatic or renal function). Some patients may respond variably to different preparations. An important complication is overdose, i.e., vitamin D intoxication with consequent hypercalcemia. Some patients will need to have their serum calcium concentration checked every day in the early postoperative period.

If the patient has refractory hypercalciuria (as is mainly seen in pre-existing renal insufficiency or nephrolithiasis), hydrochlorothiazide can be given at a high dose (25 to 10 mg daily).

To treat this problem (18, e36), the patient is first put on a low-phosphate diet: nutritional consultation is obtained, and the patient is advised to restrict consumption of foods and drinks that contain large amounts of phosphate, including cola drinks, eggs, dairy products, meat, and canned foods. If this does not achieve the desired effect, phosphate binders can be given, e.g., aluminum hydroxide (up to 600 mg t.i.d.) or sevelamer (800 mg 1 to 5 times daily).

Conflict of Interest Statement
The author states that he has no conflict of interest as defined by the guidelines of the International Committee of Medical Journal Editors. 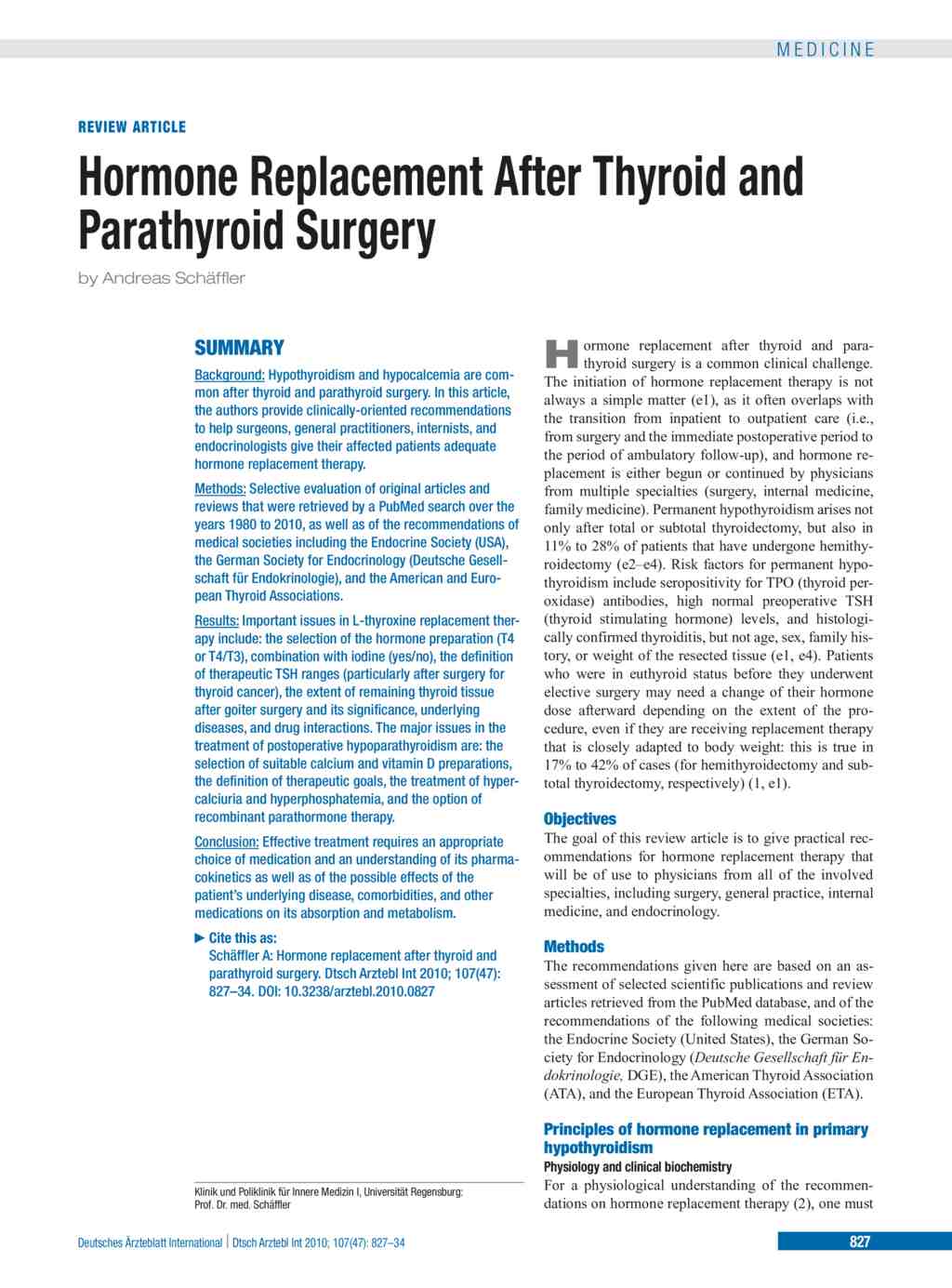