Background: The German Standing Committee on Vaccination recommends annual vaccination for persons in high-risk groups in order to lower the disease burden associated with seasonal influenza. The stated target is 75% vaccination coverage of people over age 60 by the year 2010. We present statistics based on billing data of the German associations of statutory health insurance physicians regarding vaccination coverage for influenza in the three seasons from 2004/05 to 2006/07.

Influenza is a viral disease that is transmitted mainly via large-droplets. The pandemic potential of influenza viruses was illustrated by the subtype influenza A (H1N1), which occurred de novo in 2009. The seasonal influenza wave usually starts in January or February and lasts for about 8 to 10 weeks. Severe disease courses and complications usually affect elderly patients or persons with chronic underlying conditions (1).

Since the German Protection against Infection Act (Infektionsschutzgesetz, IfSG) was introduced in 2001, an average of 8400 cases per year of confirmed influenza virus were reported to the Robert Koch Institute (RKI) in the context of the law on notifiable diseases (2), but it can be assumed that the actual number of influenza patients is much higher than that (3). To lower the overall disease burden due to influenza, the German Standing Vaccination Committee (Ständige Impfkommission, STIKO) therefore recommends annual vaccination against the currently circulating influenza strain for persons older than 60 and particular risk groups. These include persons with an increased health risk owing to underlying conditions, medical personnel, persons in institutions with comprehensive contacts with the public, or persons who might act as possible sources of infection for other, unvaccinated individuals under their care who are at increased risk of infection and developing severe disease (4). The RKI and Paul Ehrlich Institute recommend the months of October and November for the vaccination campaigns (5). Germany is following the recommendations of the World Health Organization (WHO), which aim to achieve vaccination coverage of 50% of the elderly population by 2006 and 75% by 2010 (6).

Influenza vaccinations undertaken by doctors are not centrally captured. The main method to determine the vaccination rate for influenza that has been available thus far are cross sectional telephone surveys, whose results are published regularly (7, 8). Compared with France, Italy, Spain, and the United Kingdom, Germany had the lowest vaccination rate (50.2%) in people older than 65 in the 2006/07 influenza season (9). The rates for the four other countries were between 60.5% and 69.5%. In a comparison with 10 European countries, Germany reached the 6th place for those older than 65 in the 2007/08 influenza season (10). Further, the number of doses of influenza vaccine is used to estimate vaccination rates (11). Thus far it is not exactly known how many people are vaccinated against influenza every year and how many people are vaccinated at irregular intervals. The latter are part of a target group for a recall system, which doctors can use to remind their patients of the required vaccinations and thus increase influenza vaccination rates (12).

Since 2004, the German associations of statutory health insurance physicians have been reporting pseudonymized data on billed vaccinations to the Robert Koch-Institute in the context of a sentinel project.

Our secondary analysis of these data aims to determine vaccination rates in the population of persons older than 60 in the areas covered by 14 (of 17) associations of statutory health insurance physicians for the seasons 2004/05, 2005/06, and 2006/07. We investigated in which months vaccine uptake is highest and which proportions of people are regularly vaccinated against influenza every year.

The collected data are part of the quarterly listing of services provided by physicians in private practice and hospital doctors authorized by the associations for statutory health insurance physicians for the purpose of billing the statutory health insurers. The associations reported data on billed influenza vaccinations to the Robert Koch Institute. The data are pseudonymized but reported on a case by case basis, so it is possible to assign different vaccinations to the same recipient. The data are subjected to structural and substantial checking, and a plausibility check for completeness is undertaken. The methods of the KV sentinel projects, including quality assurance of the data and data protection, have been described in detail elsewhere (13).

The study population comprises all persons with membership of statutory health insurance schemes who live in the 14 areas (some 61.5 million) (14). This accounts for about 86% of the total populations living in those areas. Someone is counted as a vaccinated person if they have received at least one influenza vaccination per season. An influenza season is defined as the time period from 1 July of every year to 30 June of the following year. The vaccination rates are calculated from the numbers of vaccinated persons in the respective populations.

Timing of the influenza vaccination

For about 60% of vaccinated individuals, information on their sex was included in the data. In both age groups, more women than men were vaccinated (60% and 64%, respectively). The proportion of women in the study population in the under-60-year-olds was 51% and in the over-60-year-olds, 59%. 67% of those who received the vaccine in all 3 seasons under study were women.

The World Health Organization has set a target for 2006 for influenza vaccination rates in the elderly population of above 50% and for 2010 of above 75% (6). In Germany, the average vaccination rate for influenza in the over-60-year-olds in the areas under study came to 50% only in the 2005/06 season. In the individual German states, the situation was heterogeneous. Berlin, Brandenburg, Saxony, Saxony-Anhalt, and Thuringia had vaccination rates of 54% to 64%. Of the western states, only Lower Saxony reached a vaccination rate of 50% in the 2005/06 season. In 2005/06, vaccination rates peaked in all German states, which may be explained with the severe influenza season 2004/05 and the generally raised awareness owing to avian influenza. In the seasons under study, vaccinations against influenza were administered mainly in the months of October (at an average of 48%) and November (at an average of 22%). These months are regarded as the ideal months for administering the vaccine (5). After the new year, only 1% to 2% of vaccinations were given in the over-60-year-olds, and 3% to 6% in the under-60-year-olds, although this time marks the onset of the influenza season, and repeat invitations to be vaccinated are issued. In September 2006, fewer vaccinations were given in all age groups than in the same month in the preceding years. The reason was that the vaccine became available only with a few weeks’ delay in the autumn of 2006. This may have contributed to the fact that the vaccination rate in the 2006/07 season did not rise further compared with 2005/06. In Saxony, the vaccination rate in the general population rose by almost two thirds from the 2004/05 season to the 2005/06 season. In each age group, notably more persons were vaccinated, with a particularly big increase in the over-50-year-olds. The vaccination committee for Saxony (Sächsische Impfkommission, SIKO) lowered the recommended age for standard influenza vaccination from older than 60 to older than 50 in 2005 (15). The costs of the vaccines were reimbursed by Saxony’s statutory health insurers without any restrictions being imposed. International comparative studies have shown that the fact that the vaccination was free of charge played an important part in people’s decisions about whether to be vaccinated or not (10). The Saxony State Medical Association and the state’s association of statutory health insurance physicians informed doctors about the changes, which apparently led to a sustained increase in the number of influenza vaccinations.

Vaccination rates in the over-60-year-olds, as determined in the annual cross sectional telephone survey by the Szucs, Blank, et al. working group, were around 41% (2004/05 season), 52% (2005/06 season), and 45% (2006/07 season) (7). Vaccination rates in the over-60-year-olds, which we calculated on the basis of data from the associations of statutory health insurance physicians, were about 45% (2004/05 season), 50% (2005/06), and 49% (2006/07). This means that vaccination rates for 2004/05 and 2006/07 in the cross sectional telephone surveys were 4% below those based on the data from the associations of statutory health insurance physicians. The vaccination rate for the 2005/06 season in the cross sectional telephone survey was 2% above that calculated by us. We were not able to conclusively explain how these deviations arose. The cross sectional studies are based on a sample of persons older than 14 in the German population, whereas the associations’ data cover the population with statutory health insurance. The number of vaccine doses prescribed rose from 17.5 million in 2004 to 20 million in 2007, with the largest number of doses prescribed in 2005 (20.8 million) (11). Relative to the total population in Germany, this means vaccination rates of 21% to 25%, which is in the same order of magnitude as the calculated rates based on the KV data.

In order to support physicians in private practice in helping to achieve improved vaccination coverage, doctors have been provided with several posters and an information brochure (19). 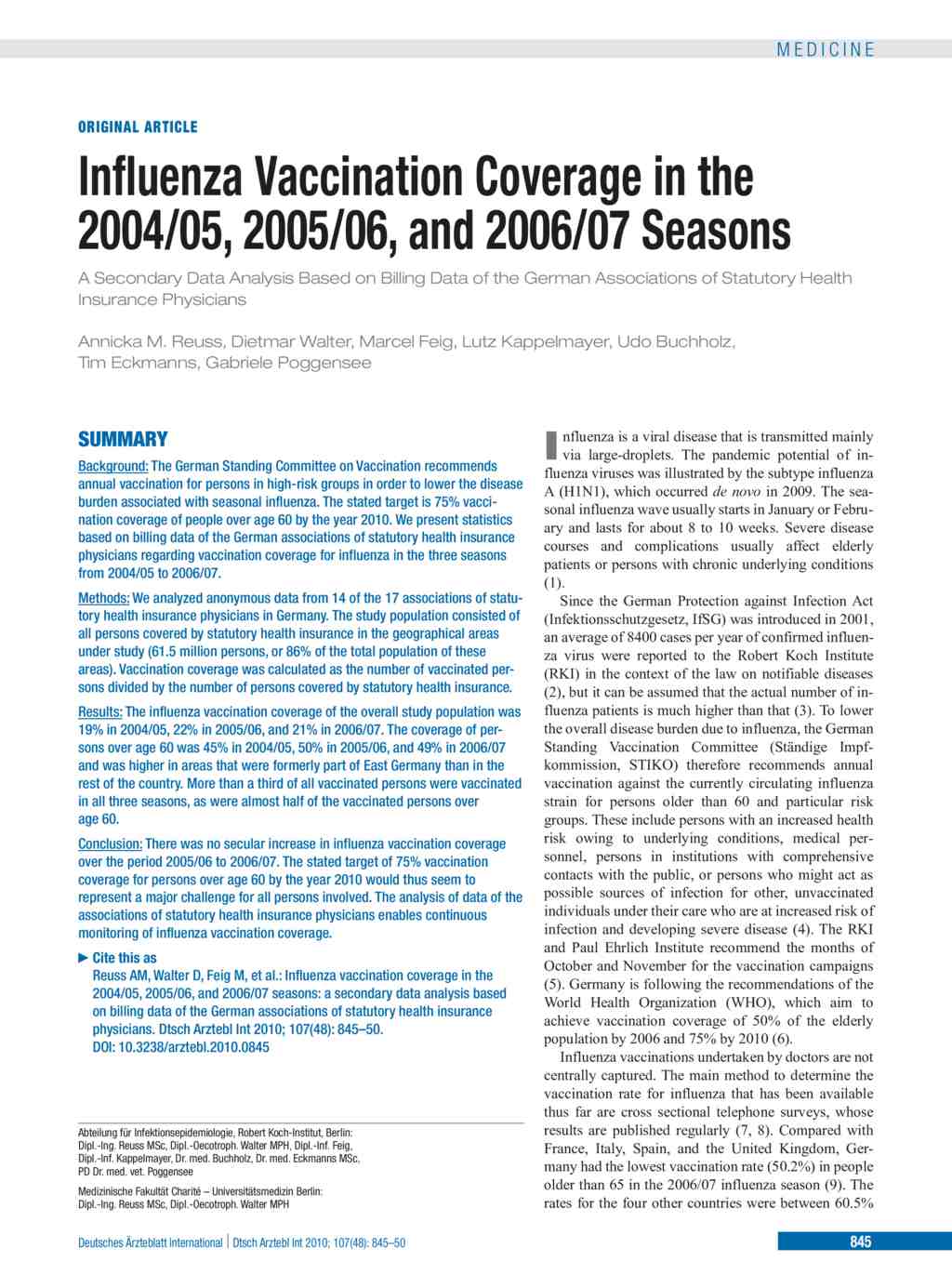