The authors thank their correspondents for their feedback. Dietrich rightly points out that the data from the health insurance companies document the disorder only for insurees with contact to their doctors and suggests to specify as prevalence estimates as “prevalence of consultations.” We dealt with this aspect in our article with the terms “treatment prevalence” or “administrative” treatment prevalence.

We agree with Dietrich that these administrative prevalence rates are lower than those obtained from population surveys, such as the Robert Koch-Institute’s German Health Interview and Examination Survey for Children and Adolescents (Kinder-und Jugend-Gesundheitssurvey, KiGGS) (1), which may include unknown cases and patients who have not consulted a doctor. However, we regard the routine data that have no selection bias or recall bias as an important addition to the surveys, which can only be conducted at greater time intervals owing to their high cost.

In the discussion section we point out that treatment with methylphenidate is regarded as a public health problem in many countries. From the context it is clear that this statement relates to the increase in prescriptions observed in many countries and thus to the background phenomenon of an increase in diagnoses with all its social, medical, and health economic problems. At no point in the article did we refer to indication conform treatment as a problem.

We showed in our study that not every coded diagnosis results in a prescription for stimulants. However, the proportion of prescriptions for drug treatment has risen from 35.5% in 2000 to 48% in 2007. Dietrich’s assumption that other psychiatric disorders have higher prevalence rates of drug treatment does not provide any clues about the quality with which the indication was defined. Börner also mentions how difficult it is to reach a diagnosis and assumes that the diagnosis is possibly made only on the basis of the effects of MPH. We cannot comment on this because we cannot conclude this from the available data.

The extent to which ADHD is solely genetically determined or whether it is multifactorial in origin (2) was not the subject of our study and we can therefore not discuss it here. However, as Neraal illustrates by explaining the results of a recent Swedish study, many studies have shown an association between socioeconomic class and the development of psychiatric disorders. This applies to Germany too, as detailed in the KiGGS: the lower someone’s socioeconomic status, the more often they received a diagnosis of ADHD (1). 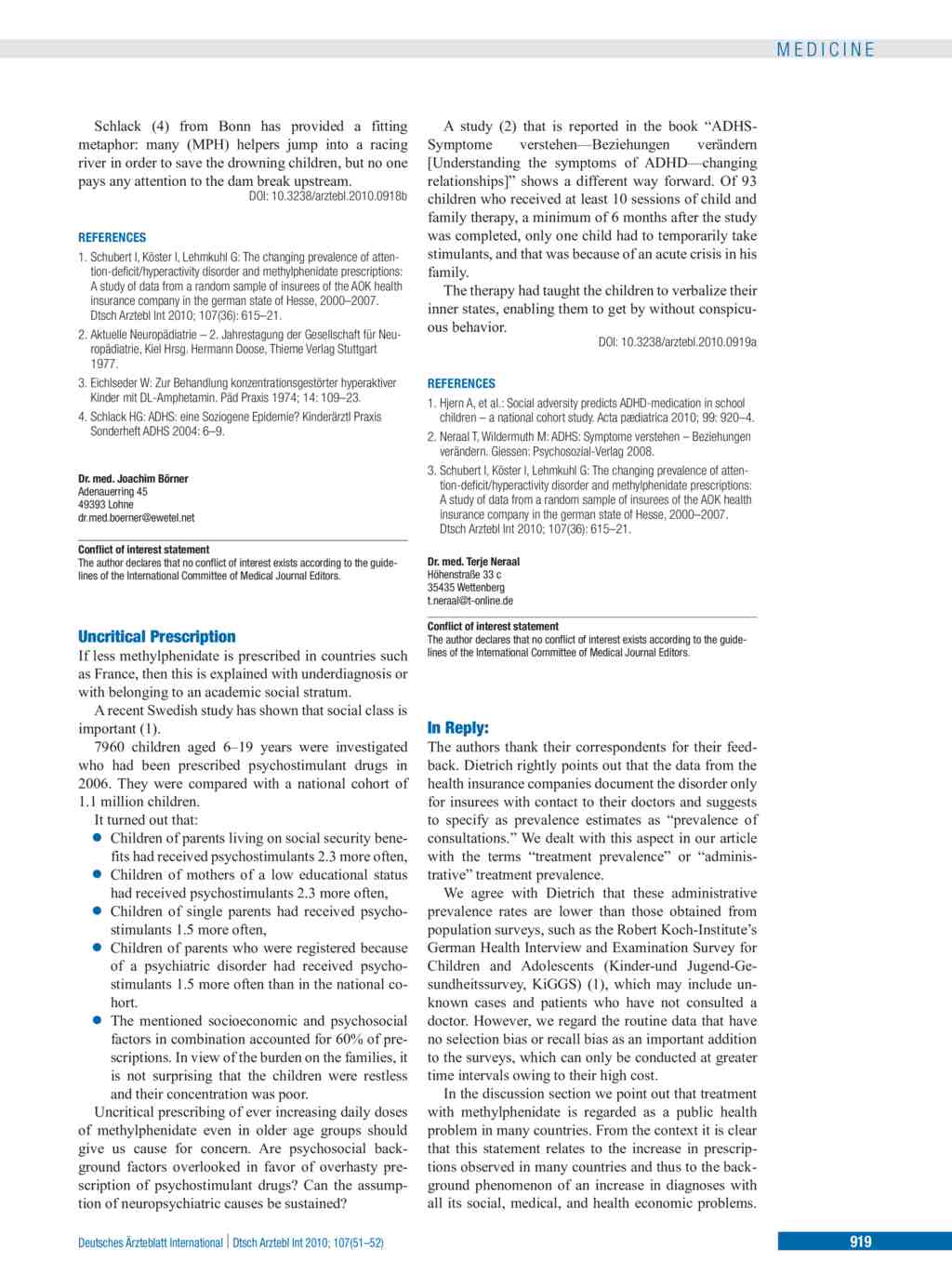