Vaccination Status and Health in Children and Adolescents

Background: Whether unvaccinated children and adolescents differ from those vaccinated in terms of health is subject to some discussion.

Method: We evaluated data on diseases that are preventable by vaccination, infectious and atopic diseases, and vaccinations received that had been collected between 2003 and 2006 in a representative sample of 17 641 subjects aged 0 to 17 years in the framework of the German Health Interview and Examination Survey for Children and Adolescents (Kinder- und Jugendgesundheitssurvey, KiGGS).

Conclusion: The prevalence of allergic diseases and non-specific infections in children and adolescents was not found to depend on vaccination status.

Protective vaccinations are among the most important and effective preventive measures in modern medicine (1). They make a substantial contribution to reducing the probability of contracting many infectious diseases as well as their severity. The immediate goal of a vaccination is to protect the vaccinated person from a disease. Achieving high rates of vaccinated persons additionally results in the so called herd immunity.

In Germany, recommendations for vaccinations are made by the German Standing Vaccination Committee (Ständige Impfkommission, STIKO) at the Robert Koch Institute (2). For infants, children, and adolescents, the current vaccination schedule includes standard vaccinations to protect against diphtheria, pertussis, tetanus, Haemophilus influenzae type b, hepatitis B, poliomyelitis, pneumococci, meningococci, measles, mumps, rubella, and varicella. For girls aged 12–17, vaccination against human papillomavirus is also recommended (3). The benefits, efficacy, and safety of protective vaccinations are widely scientifically proven. Furthermore, modern vaccines are well tolerated (4, 5). In spite of all this, some parents and doctors have reservations against vaccinations. The fear is that vaccinations overburden, stress, or weaken a child’s immune system and may therefore cause harm. As a result they think that vaccinated children are more prone to falling ill than non-vaccinated children. In addition, vaccinations are deemed to be responsible for the occurrence or increased incidence of other diseases, including chronic diseases (6, 7).

The current exploratory study uses data from the German Health Interview and Examination Survey for Children and Adolescents (KiGGS) to investigate and compare the occurrence of vaccine preventable diseases, infections, and atopic disorders in vaccinated and unvaccinated children.

The German Health Interview and Examination Survey for Children and Adolescents (KiGGS) was conducted from May 2003 to May 2006 by the Robert Koch Institute. The objective of the interview and examination survey was to collect representative data on the health status of children and adolescents aged up to 17 years. In total, 17 641 children and adolescents (8656 girls, 8985 boys) and their parents participated in the study (response rate 66.6%), who were randomly selected in 167 German locations (8, 9). The study was approved by the Charité-Universitätsmedizin Berlin ethics committee.

Data on sociodemographic characteristics, vaccine preventable diseases, and infections were collected from a parent questionnaire. From the data submitted by parents on their own school education, professional qualifications, job positions, and net household incomes, the social strata index by Winkler (10) was determined (“high,” “medium,” or “low”). Lifetime prevalence calculations for pertussis, measles, mumps, and rubella were based on the question: “Has your child ever had … ?” The parent questionnaire also collected data on the following infections: cold/flu-like infection, tonsillitis, herpesvirus infection, bronchitis (not when asthma was present), gastrointestinal infection, cystitis and/or urethritis, purulent conjunctivitis (bacterial conjunctivitis). The parents of children up to age 11 years were also asked whether their child had ever had croup. From these data, the median number of infections for the preceding year was calculated for every study subject.

A standardized, computer-assisted personal interview (CAPI) of the accompanying parent by a doctor yielded data on medical diagnoses of atopic disorders (allergic rhinoconjunctivitis, atopic eczema, bronchial asthma) and several other diseases. The questions were: “Has a doctor at any time diagnosed your child with disease X?” Subjects for whom at least one atopic disorder ever was reported were assigned the characteristic “atopic disorder.” The questions about diseases were followed by data collection on the basis of medical records in the vaccination card, about data concerning the administered vaccinations and the timing of the vaccination. The data were evaluated with regard to the STIKO recommendations. Children and adolescents were defined as unvaccinated if at the time of the KiGGS survey no documentation existed for any vaccination against diphtheria, pertussis, tetanus, Haemophilus influenzae type b, hepatitis B, poliomyelitis, measles, mumps, or rubella. By contrast, children who had by then received at least one vaccination according to their vaccination card were categorized as vaccinated. Immigrant families were excluded from the analyses in order to avoid misclassification because of the often missing or incomplete vaccination documents.

The software packages SPSS (version 14, prevalences) and SAS (version 9.2, medians) were used for our statistical analyses. The stratified and clustered study design of KiGGS was taken into account by applying the analytical methods for complex samples (SPSS), which provide correct 95% confidence intervals, or by applying the survey procedures in SAS (11). The data were evaluated in consideration of the correlation of the subjects within a community and by including weighting and correcting for deviations of the KiGGS participants from the population structure of 0–17-year-olds (as of 31 December 2004) with regard to age, sex, region (east/west/Berlin), and nationality (12). Differences between groups in terms of prevalences or medians that reached significance were tested at the 5% significance level by means of Fisher’s exact test.

Of the 17 641 individuals in the KiGGS, 14 148 children and adolescents were aged 1–17 years and lived in non-immigrant families. A vaccination card was available for 13 499 of these individuals (95.4%). Of these, 41 were not evaluated because their vaccination card was illegible or seemingly incomplete (follow-up document). Furthermore, five unvaccinated subjects were not evaluated who, according to their parents, had not been vaccinated at the planned date because of frequent illnesses. Evaluable vaccination data were therefore available for 13 453 children and adolescents aged 1–17 years (95.1%).

Figure 1 (gif ppt) shows the percentages of 1–17-year-old children and adolescents who according to their parents had had pertussis, measles, mumps, and/or rubella. The comparison is between unvaccinated children and adolescents and those who, according to STIKO recommendations for children’s respective age groups, had been sufficiently vaccinated against the respective infectious disease at the time of the survey.

The KiGGS study is a German nationwide cross sectional study that is representative for the resident population. The study investigated the health status of children and adolescents up to 17 years of age. The participation rate was very high for a study of this type (12).

In total, 13 453 individuals were included in the analyses. The excluded individuals had not completed the first year of life at the time of the data collection, or they lived in immigrant families, or their vaccination data were not evaluable. We excluded such subjects in order to minimize misclassifications with regard to participants’ vaccination status. Furthermore, data from unvaccinated children were excluded if the recommended vaccinations had not taken place because of illness, as reported by the parents. This approach was chosen to distinguish children who were not vaccinated because of poor health from those who are categorized as unvaccinated in the context of this study.

In spite of any attempt to rule out misclassifications we cannot entirely exclude the possibility that some children without a vaccination card were vaccinated without adequate documentation. A systematic question regarding this issue will therefore be included in future KiGGS studies.

Study data regarding diseases may also depend on people’s ability to remember and on the assessment of those surveyed as well as on a medical diagnosis. We therefore cannot completely rule out that the true prevalence may be over- or underestimated. Questionnaire surveys or interviews with doctors are, however, standard procedures internationally and have been used in many studies. Furthermore, the information documents morbidity for which advice or treatment had been provided in the health care system.

On the basis of the KiGGS data, 0.7% (95% CI 0.5 to 0.9) of all children and adolescents aged 1–17 years who don’t come from immigrant families had never received a vaccine in Germany. This proportion was no different for girls or boys and was highest in children aged up to 5 years. With regard to the importance of vaccinations the low proportion of children and adolescents who had never been vaccinated is appreciated. The US National Immunization Survey (NIS) for 2001 showed that 0.3% (95% CI 0.2 to 0.4) of children aged 19–35 months were unvaccinated (13). In spite of limitations in terms of the comparability of the healthcare system in both countries, KiGGS data indicate that the proportion of unvaccinated children in Germany is higher (1.1% [95% CI 0.7 to 1.7] of 1–5-year-olds) than in the US.

Because of the low proportion of unvaccinated persons in the population, the numbers even in the large KiGGS study are small, so that statistical evaluation—especially subgroup analyses—is hindered by small case numbers.

As expected, vaccine preventable diseases affected those who had been vaccinated against a particular disease to a lower degree than unvaccinated persons. The KiGGS data do not show at what age the disease first occurred. This means that vaccinated subjects may have contracted the disease before vaccine induced immunity had developed. Looking only at the time interval after vaccine induced immunity had developed the probability of contracting a disease can be expected to be notably lower in those vaccinated against that disease. Outbreak investigations for measles and pertussis, for example, have reported high effectiveness of vaccinations in more than 97% of children who were sufficiently vaccinated (14–16). In future KiGGS studies, the questions regarding vaccine preventable diseases will be extended to include the age at which the disease first manifested.

Another fear associated with protective vaccinations is that they might possibly promote the development of allergies. The KiGGS data did not show statistically significant differences in the prevalence of atopic disorders in unvaccinated subjects compared with vaccinated subjects. The prevalences in both groups increased, as expected, with age. No doctors’ diagnoses of bronchial asthma were reported for unvaccinated children aged 1–10 years. Because of the low incidence of asthma and given the fact that diagnosing asthma in this age group is difficult, no cases of asthma were to be expected within the small group of unvaccinated children. Furthermore, differences in the awareness of symptoms or parents’ advice seeking behaviors may explain different prevalences in doctors’ diagnoses. Studies that enumerated cases at the symptom level have continuously observed higher prevalences of asthma than KiGGS (17, 18).

In recent years, a number of scientific articles were published investigating potential associations between vaccinations and allergies. In a review article by Bernsen et al. from 2006, which summarized study results about the association of diphtheria/tetanus/pertussis vaccination, measles/mumps/rubella vaccination, and Haemophilus influenzae type b vaccination with atopic disorders, the authors conclude that according to the available evidence, recommended protective vaccinations do not increase the risk of atopic disorders in children (19). In an international study from 2008, which included 2184 children aged 1–2 years, Grüber et al. investigated the effect of vaccinations in the first year of life on the severity of atopic eczema and allergic sensitization in the second year of life. They did not find an increased risk for allergies (20). The current guideline for allergy prevention (as of March 2009) recommends vaccinations according to STIKO recommendations for children and adolescents with and without allergy risk (21).

In addition to atopic disorders, we further compared diseases—such as obstructive bronchitis, pneumonia and otitis media, heart disease, anemia, epilepsy, and attention deficit hyperactivity disorder (ADHD)—in unvaccinated and vaccinated subjects. No relevant differences in the lifetime prevalences were found, neither for different age groups nor between girls and boys. Schneeweiß et al. conducted a comprehensive literature review of vaccine safety, the central part of which was the evaluation of vaccine critical arguments on the basis of the current state of scientific knowledge. None of the hypotheses were found to be valid (5).

Conflict of interest statement
Drs Schmitz and Reiter declare that no conflict of interests exists according to the guidelines of the International Committee of Medical Journal Editors.
Dr Schlaud was the lead investigator of an epidemiological study of deaths in children aged 2–24 months (TOKEN Study) in 2004–2009, which was jointly funded by the Federal Ministry of Health, the Paul Ehrlich-Institute, Sanofi Pasteur, and Glaxo Smith Kline.
Dr Poethko-Müller was responsible for coordinating the study mentioned before. 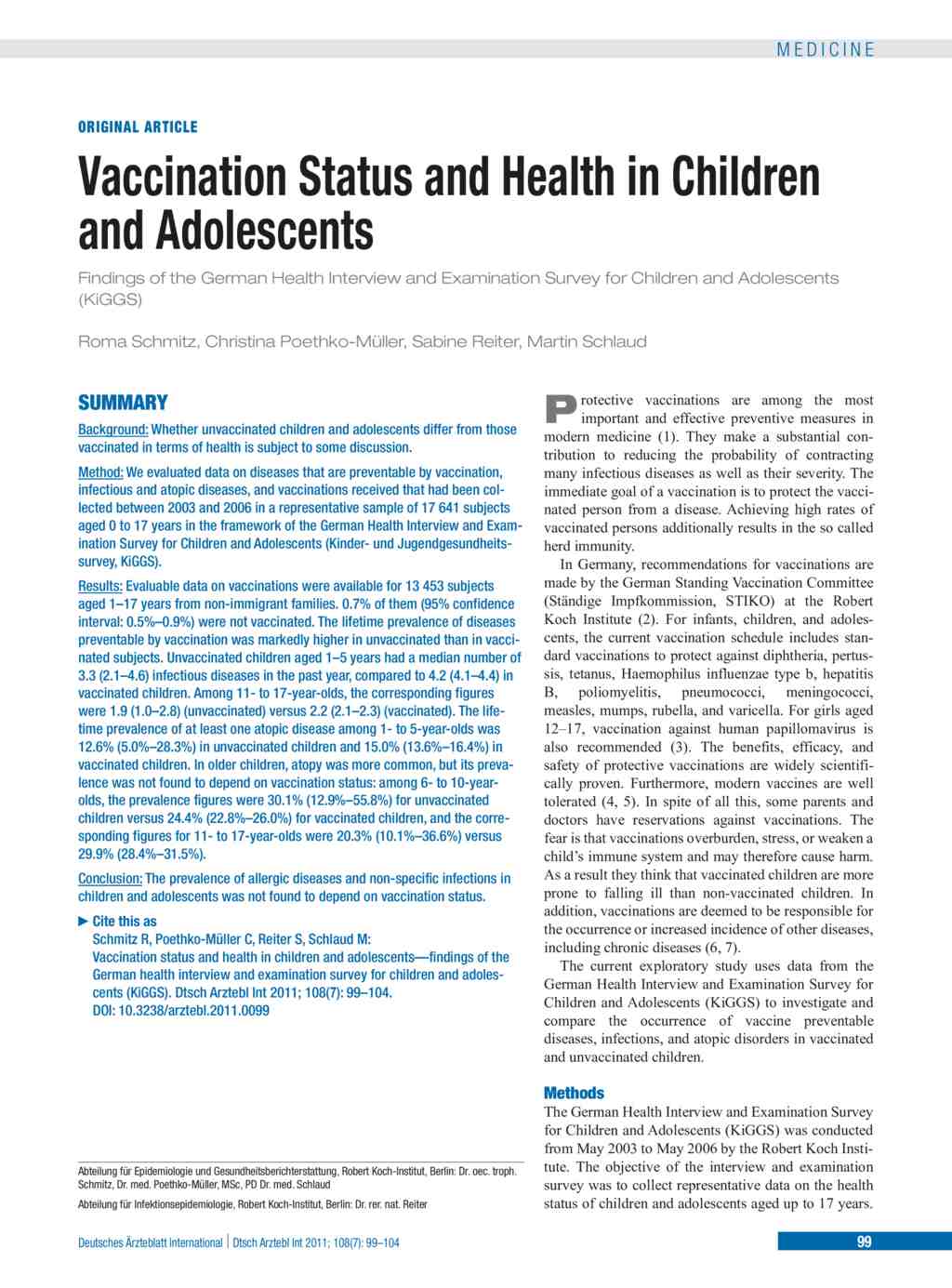