Part 15 of a Series on Evaluation of Scientific Publications

Background: Survival times are often used to compare treatments. Survival data are a special type of data, and therefore have to be analyzed with special methods.

Methods: We illustrate special techniques for analyzing survival times by applying them to a publication on the treatment of patients with brain tumors. The present article is based on textbooks of statistics, a selective review of the literature, and the authors’ own experience.

Results: Survival times are analyzed with the Kaplan-Meier method, which yields two measures of interest: survival rates and the median survival time. The log-rank test is used to compare survival times across treatment groups. Cox regression is used in multivariable models. The hazard ratio, a descriptive measure for differences in survival times, is explained.

Conclusion: If survival times are analyzed without the use of special techniques, or if the underlying assumptions are not taken into account, faulty interpretation may result. Readers of scientific publications should know these pitfalls and be able to judge for themselves whether the chosen analytical method is correct.

In many areas of medicine, the primary target parameter is the time until an event occurs. Examples include the time from diagnosis of lung cancer to death, the time from fitting dentures to first repair, and the time from the beginning of treatment for urinary incontinence until successful treatment outcome. An “event” may be either success (cure) or failure (death). It is important that both the beginning of the period of time and the time of the event are clearly defined. The time between the two is generally called survival time, even when the event which ends it is not death.

Almost all specialized medical publications include articles in which survival analysis techniques are used. A recent example of this is a trial in patients with brain tumors. Von Hoff et al. (1) investigated 280 children and young people with medulloblastoma in the two-arm, randomized trial HIT ’91 (HIT = Hirntumor [German for brain tumor]). Patients in arm 1 received chemotherapy before and after radiotherapy (“sandwich” chemotherapy), while patients in arm 2 first received radiotherapy and then chemotherapy (maintenance chemotherapy). The trial investigated whether one of the two types of treatment led to longer patient survival times.

In order to interpret the results and value of such publications correctly, readers should be familiar with the methods used to analyze survival times. This article provides a step-by-step introduction to survival analysis techniques based on the HIT ’91 trial and enables readers to understand and interpret them themselves.

The nature of survival time data

For both ethical and financial reasons, clinical trials last for only a limited period of time. In some patients, the expected event, e.g. death or success of treatment, does not occur until after the end of the trial, or even not at all. This means that the only information available on these patients is that no event has yet occurred as of a particular point in time. This is known as censoring. Censoring can also occur when individuals leave a trial. This occurs, for example, when they no longer wish to take part in the trial or die for reasons unrelated to the trial.

In oncology, a distinction is often made between overall survival (the time from diagnosis to death for any reason) and tumor-specific survival (the time from diagnosis to tumor-related death). In tumor-specific survival, patients who die for reasons unrelated to their tumors are censored because the event “tumor-related death” has not occurred. In more complex evaluations, both events can be investigated in parallel (as competing risks). However, this will not be examined in this article. HIT ’91 investigated the time from primary brain tumor operation to death for any reason.

When evaluating survival times, it is important to take into account both the time until an event occurs and censored patients. This article describes methods for evaluation and graphical representation of survival time data on the basis of the trial HIT ’91. Simple introductions to survival analyses are provided by textbooks by Weiß (2) and Schumacher and Schulgen (3). Textbooks by Collett (4) and by Kalbfleisch and Prentice (5) may be consulted for further reading.

Calculation of the probability of survival and graphical representation using a Kaplan–Meier curve are explained step by step in Box 2.

Survival rates can be determined using the Kaplan–Meier curve. Survival rates indicate the number of patients in whom no event has occurred up to a certain point in time. In the example above, the 1-year survival rate is 30% (Box 2). This can be interpreted as follows: one year after diagnosis, we can expect 30% of patients to be still alive. When stating survival rates, it is important to also state the point in time to which it corresponds. When comparing two treatment groups, it is advisable to plot Kaplan–Meier curves for both treatment groups, as these provide more information than survival rates alone.

In HIT ’91, the survival times of patients from the two treatment groups were compared according to their metastasis statuses. Kaplan–Meier curves can be used for descriptive comparison of the two treatment groups’ survival times for patients with metastasis status M1 (Figure 2). The standard method, the log-rank test, was used for statistical comparison of survival times. The log-rank test examines whether there is a difference between two groups’ survival times. This involves not only a specific point in time, such as the 6-month survival rate, but also the whole observation period. To put it more simply, we might say that Kaplan–Meier curves are compared with each other.

An extended form of the log-rank test can be used to compare three or more groups, e.g. to compare the survival times of patients with metastasis status M0 versus M1 versus M2/3. This means examining whether survival times are longer or shorter in at least one group than in the other groups.

In HIT ’91, the p-value of the log-rank test used to compare the treatment groups is 0.020. The difference between survival times is significant, with a significance level α = 5%. The group represented by the top curve is the group with the longest survival times. In this example, it is the group receiving maintenance chemotherapy. Patients who receive maintenance chemotherapy live longer than patients who receive sandwich chemotherapy.

The simultaneous effects of several variables on survival time can also be investigated. The parameters examined in the HIT ‘91 study include the following:

The effect on survival time of age at operation, a continuous variable, should also be examined. Cox regression (8) can be used in both cases. Cox regression can also be used to obtain an estimator of the effect size. This estimator takes the form of the hazard ratio.

If Kaplan–Meier curves are used for patients with metastasis status M1 from HIT ’91 (Figure 2 gif ppt), we can see that maintenance chemotherapy performs uniformly better. This means there is no evidence against the assumption of proportional hazards.

As with linear regression, there are also several possible methods for variable selection in Cox regression (see Schneider et al. [10]).

There are four possible metastasis statuses:

With a continuous variable, the hazard ratio indicates the change in the risk of death if the parameter in question rises by one unit, for example if the patient is one year older on diagnosis. For every additional year of patient age on diagnosis, the risk of death falls by 7% (hazard ratio 0.93). Note that the unit chosen for the explanatory variable (in this case age on diagnosis in years, see Schneider et al. [10]) is retained when measures are interpreted.

All the variables examined so far have been known at the beginning of survival time. For example, HIT ’91 investigated whether metastases which were present at the time of brain tumor surgery affected survival. To investigate a variable that is still unknown at the beginning of survival time or that changes over time, time-dependent Cox regression must be used. For example, if we wish to know whether diabetes patients’ cumulative dose of insulin affects the length of time until a cardiovascular event occurs, we cannot stipulate the cumulative dose as a known quantity at the outset. Patients who survive longer will generally receive a higher total dose. However, this high cumulative dose is not the cause of longer survival. To allow for this, the cumulative dose must be included in Cox regression as a time-dependent variable. Time-dependent Cox regression is a highly complex procedure. It is described at length in Collett’s textbook (4).

In order for results to be reliable, the number of events must be high enough. (N.B.: This does not mean the number of patients.) For each variable investigated using multivariable Cox regression, there must be at least ten events (12). If there is a small number of events, only a few explanatory variables can be investigated simultaneously. In HIT ’91 there were 101 cases of death. This means that a maximum of ten variables can be included in Cox regression.

A sample size calculation can be made for both the log-rank test and Cox regression. In addition to the significance level and the power to be achieved, we also need an estimated survival rate for each group to be compared or the estimated hazard ratio for a continuous explanatory variable (3). Sample size calculation also takes into account the recruitment and follow-up time.

If censored patients are distributed differently in each of two treatment groups that are to be compared, biased estimators may result. The degree of completeness of follow-up in each treatment group should therefore be reported (see Clark et al. [13]).

As survival time data contain censorings, they must always be evaluated using the Kaplan–Meier method and the log-rank test. Analysis based on frequencies of events often produces faulty results. All doctors should understand Kaplan–Meier curves, the log-rank test and the results of Cox regression, as they must be able to explain them to patients (e.g. when choosing a treatment option: whether to treat a brain tumor with sandwich or maintenance chemotherapy).

Multivariable analyses can be performed using Cox regression. Results can be interpreted using hazard ratios and confidence intervals. Unfortunately, the underlying assumptions of Cox regression are not always taken into account (e.g. proportional hazards, time-dependent variables), and many published analyses are therefore faulty. Readers of scientific publications should know these pitfalls and be able to judge for themselves whether the chosen analytical method is correct. 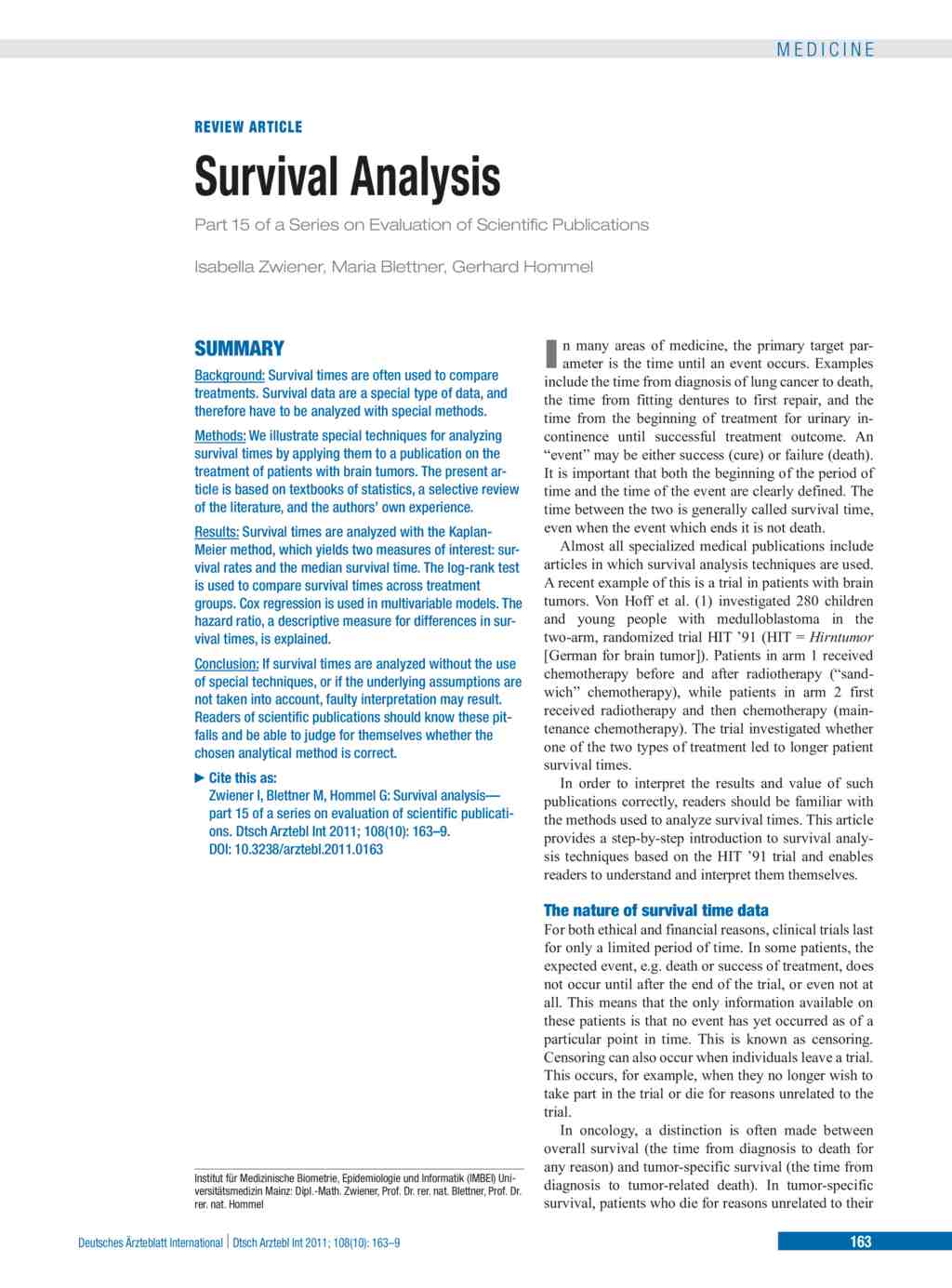