The Emotional and Neurological Consequences of Abuse

Dtsch Arztebl Int 2011; 108(17): 285-6. DOI: 10.3238/arztebl.2011.0285
Editorial to accompany the article “Maltreatment in Childhood and Adolescence: Results From a Survey of a Representative Sample of the German Population” by Winfried Häuser et al. in this issue of Deutsches Ärzteblatt International

Reports of sexual abuse in care homes, day schools, boarding schools, and ecclesiastical institutions, particularly those associated with the Roman Catholic church, have caused much public indignation in recent years. According to press reports, the publicized cases of abuse were responsible for 150 000 people leaving the Catholic church in Germany over the course of a single year.

Conventionally we distinguish between neglect, physical abuse, and sexual abuse—although this last term is actually inappropriate because it implies the existence of “sexual use”. However, there is also emotional abuse, which, though it receives less attention both in the literature and in public discourse, often has consequences just as severe as those of physical abuse. Forms of emotional abuse include:

In the English-language literature some forms of emotional abuse are summarized under the term “verbal abuse.” A typical example of emotional abuse is the oft-cited case of the father who punished his son by killing his favorite pet animal (a rabbit) before his eyes (1).

Two or more distinct forms of abuse often occur in combination (2), and this is highlighted in the new study by Häuser et al. (3), whose article is based on a representative survey of a German population sample in 2010. The participants were questioned about their experience of maltreatment in childhood and adolescence. Severe emotional abuse in childhood was reported by 1.6% of responders, severe physical abuse by 2.8%, severe sexual abuse by 1.9%, severe emotional neglect by 6.6%, and severe physical neglect by 10.8%. These results broadly agree with the findings of an earlier German study carried out by Wetzels (4).

More than 95% of instances of physical abuse and around 68% of cases of sexual abuse in Germany are committed by persons old enough to be treated as adults in the German legal system. The remaining perpetrators are children, adolescents, or young adults. A high proportion of unreported cases is assumed for both offenses.

Maltreatment—physical or emotional—often, but not always, has severe consequences. Abuse always leaves a trace in the brain, however. This has been shown both by investigations into victims’ memories of abuse and by studies of brain structure and function (5–7).

Those who have experienced physical and/or sexual abuse as children and adolescents have an above-average prevalence of psychological symptoms later in life. Their general sense of wellbeing is affected, and compared with people who have not been abused they suffer more frequently from:

They frequently have unsatisfactory sexual relationships or tend towards hazardous sexual practices (8).

In surveys of psychiatric patients, up to 60% state that they have been physically or sexually abused earlier in life. It cannot be concluded, however, that there is a causal relationship with their illness. First, far too little is known about such events in the lives of patients with other diseases. Second, we know nothing at all about those who were physically or sexually abused in their youth but have processed their experience in such a way that no psychological disorders have resulted.

Studies of children from orphanages and care homes in Romania have been revealing. They show not only that the consequences of extreme deprivation and neglect can be significantly ameliorated, not to say compensated, by transfer to an optimal environment, but also that the capacity, or, better, the potential to cope constructively with such experiences varies from child to child. This is attributed to genetic differences. Children whose serotonin transporter gene featured two short alleles (s/s) or one short and one long allele (s/l) experienced emotional disorders in adolescence significantly more frequently than those whose phenotype was characterized by two long alleles (l/l) (9). In addition to this genetic explanation there is a psychological theory that attributes successful coping with such stresses to protective factors located either in the person involved or in the environment (10). It is highly likely that these two explanations are linked, and interaction is probable.

Abuse events cannot be considered in isolation from legal controls and trends in society. In situations where corporal punishment of children is allowed or socially acceptable, abuse is always a danger. The permitted “clip around the ear” not uncommonly results in a perforated eardrum. It was therefore fitting when, some years ago, the German legislature made corporal punishment of children a crime. In families or communities where extremely permissive sexual attitudes are propagated as the ideal, there is the danger that sexual abuse of minors will not even be viewed as maltreatment but as an act of liberation from prudish, moribund petty bourgeois sexual morality. A good example of this is provided by what happened at the Odenwald School, where pedophilia crept in under the guise of progressive education. The liberal sexual behavior cultivated—and documented (11)—by some members of the German “1968 generation” in communes and alternative child-care centers can also be mentioned in this connection. There is no way of knowing to what extent such attitudes are still held by those who propagated them at the time and are involved in the care of young people today. It is unlikely, however, that they are shared by the Catholic priests whose sexual acts have come to attention. 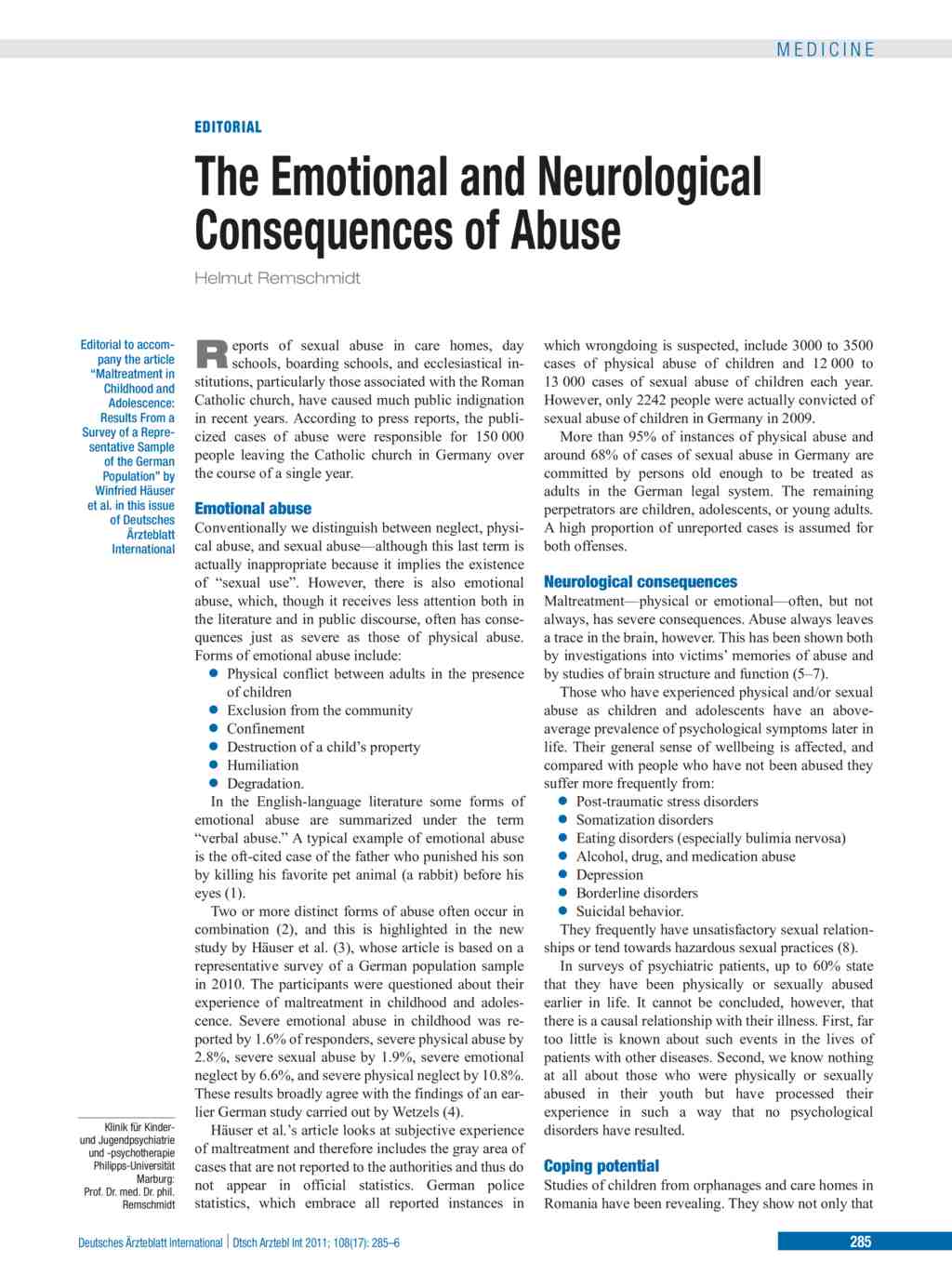