Maltreatment in Childhood and Adolescence

Background: There are no up-to-date, representative studies on the frequency of maltreatment (abuse or neglect) among children and adolescents in Germany.

Methods: In a cross-sectional study, standardized questionnaires were administered to persons aged 14 and older in a representative sample of the German population. Statistics on maltreatment in childhood and adolescence were collected with the German version of the Childhood Trauma Questionnaire. Regression analysis was used to detect potential associations of maltreatment with demographic variables including sex, age, place of birth, and social class.

Conclusion: The frequencies of various types of abuse and neglect of children and adolescents that were retrospectively determined in this up-to-date study by questionnaire of a representative sample of the German population, and the correlations between them, correspond to those found in a German population-based study in 1995 and in recent American studies.

Maltreatment in childhood and adolescence constitutes a major social problem and a health risk throughout the world (1). In the USA, the Centers for Disease Control and Prevention (CDC) define child maltreatment as “Any act or series of acts of commission or omission by a parent or other caregiver (e.g., clergy, coach, teacher) that results in harm, potential for harm, or threat of harm to a child.” Acts of commission are divided into physical, sexual, and psychological abuse. Acts of omission are classified as physical, emotional, medical, or educational neglect or failure to supervise. Neglect is defined as “failure to provide for a child’s basic physical, emotional, or educational needs or to protect a child from harm or potential harm,” while abuse is “words or overt actions that cause harm, potential harm, or threat of harm to a child.” Maltreatment can be characterized in terms of severity (from mild to severe) and frequency (from an isolated occurrence to repeated acts over a number of years) (2).

The goal of the present study was to ascertain retrospectively the frequency, severity and associations of maltreatment (abuse and neglect) of children and adolescents in a representative sample of the German general population. A validated questionnaire was used for this purpose. Furthermore, we investigated the possible associations of demographic variables (sex, age at time of study, social class) with maltreatment in childhood and adolescence.

A cross-sectional investigation of a randomly generated representative sample of the German general population was conducted by an independent public opinion and social research institute (USUMA, Berlin). The sample contained persons resident in 258 different places in Germany, 210 in the former West Germany and 48 in the former East Germany. Only persons at least 14 years old with adequate comprehension of written German were included.

All participants were informed about the study design and goals and signed a consent form. In the case of minors, the parents gave written consent. The study adhered to the ethical guidelines of the ICC/ESOMAR International Code of Marketing and Social Research Practice (7).

The survey was carried out in April 2010. The sample comprised 4455 persons, 2504 (56%) of whom completed the questionnaire. The reasons for non-participation were:

Further details of the methods are given in eBox 1 (gif ppt).

The following parameters (as of the time of survey) were recorded in a sociodemographic questionnaire:

Participants with an overall score of 3 were coded as lower class, those with 4 to 6 points as middle class, and those who scored 7 or more as upper class (8).

Maltreatment was recorded using the 28-item short form of the Childhood Trauma Questionnaire (CTQ) (9). The CTQ is the screening instrument most widely used internationally to assess maltreatment in childhood and adolescence (up to the age of 18 years) (9). The scales of the CTQ cover abuse (with subscales for emotional, physical, and sexual abuse) and neglect (with subscales for emotional and physical neglect). An additional scale (three items) measures the tendency to minimize/deny maltreatment in childhood and adolescence. If the overall rating is “slight to moderate” or higher, maltreatment is assumed (9) (eBox 2 gif ppt).

Information on the psychometric properties of the CTQ can be found in eBox 3 (gif ppt).

Pearson correlations among the subscales of the CTQ were calculated. Multiple logistic regression analyses were performed to identify any associations of demographic variables with maltreatment in childhood. The following parameters were selected as independent variables:

The internal validity of the regression models was tested by the Hosmer-Lemeshow test. If a participant failed to respond to up to 25% of the questions in the CTQ, each unanswered question was substituted by the mean value of the remaining items in the subscale concerned. If more than 25% of the questions went unanswered, that data set was excluded from analysis. All calculations were performed using the statistical software SPSS (version 17.0).

Data on 2504 persons were eligible for evaluation. Ninety-three (3.7%) of the subjects (60 men, 33 women; mean age 41.3 years) stated that they were born outside Germany (non-German nationality) (see Table 1 gif ppt for details). With regard to age and sex distribution, the sample did not differ greatly from a sample of the German general population surveyed by the Federal Statistical Office in 2007 (51% women, mean age 49 years) (14).

Frequency and severity of abuse and neglect

Eleven participants were excluded from analysis on grounds of missing data. On the minimization/denial scale, 1581 (63.1%) subjects scored 0 points, 398 (15.9%) scored 1 point, 311 (12.4%) scored 2, and 214 (8.5%) scored 3 points. 15.0% of those in the total sample reported emotional abuse, 12.0% reported physical abuse, and 12.6% reported sexual abuse; 49.5% stated that they had experienced emotional neglect and 48.4%, physical neglect in their childhood and/or adolescence. Severe emotional abuse in childhood and adolescence was reported by 1.6% of the total sample, severe physical abuse by 2.8%, and severe sexual abuse by 1.9%. Severe emotional neglect in childhood and adolescence was stated by 6.6% and severe physical neglect by 10.8% (Table 2 gif ppt).

Correlations among the different types of maltreatment

Predictors of any maltreatment

The logistic regression analysis models were significant. With the sole exception of physical abuse of any degree, the p-values of the Hosmer–Lemeshow test were above the level of significance.

Comparison with other studies

We compared our results with the findings of other studies with regard to the following points:

Studies using the CTQ—In a population-based study conducted in the USA in 2003, 775 persons (507 women, 268 men) aged between 18 and 65 years were interviewed by telephone. The rates of at least mild maltreatment for women (men in parentheses) were as follows:

Emotional neglect was less frequent than in our study, while the rates of physical and sexual abuse were similar (15).

Studies involving German population samples— Because of differences in the definitions of maltreatment, our study is not fully comparable with the one published by Wetzels in 1998 (5). In the latter, 74.9% of the 3289 subjects stated they had experienced physical violence during childhood and 10.6% reported physical maltreatment at the hands of their parents. Physical maltreatment was defined as any act going beyond the parents’ right to discipline their children as defined in law. Experience of sexual abuse (with physical contact) before the age of 16 was reported by 8.6% of the women and 2.8% of the men.

In a survey of 91 women born between 1895 and 1936, 18% reported sexual abuse below the age of 13 years and 21% stated they had been sexually abused between the ages of 13 and 21. Eight percent of the sexually abused women reported that sexual intercourse had been forced upon them. In 37% of these cases the perpetrator was a stranger and in 15% of cases a family member (17). The frequency of severe sexual abuse was lower in the present study.

Studies in the USA—Emotional and physical neglect were also the most frequent forms of childhood maltreatment in an American study, which were reported by up to 50% of the respondents (18).

The results of our study confirm the conclusion of a review from the USA, namely that mild forms of maltreatment are more frequent than severe forms (19).

Our finding of significant correlations of all forms of maltreatment with one another points to the need to see maltreatment in context: in conditions of unfavorable socialization, children may suffer multiple forms of maltreatment. In a survey of 8667 citizens covered by one health insurance provider, 34.7% reported more than one kind of maltreatment (personal experience of physical and/or sexual abuse or physical maltreatment of their mother while they were present) (20). Wetzels found that 64.3% of the victims of sexual abuse (with physical contact) also suffered more frequent or more intensive physical violence at the hands of their parents (5).

3. Groups at risk of maltreatment

In agreement with Lampe’s review of European studies (6), we found that sexual abuse was reported more frequently by women than by men. In contrast to the majority of studies reviewed by Lampe (probands: school students, college students, members of the general population), where experience of physical violence was reported more often for boys than for girls, we found no difference between the sexes in this regard. We agreed with Wetzels (5) in finding no association between social class and sexual abuse. A recent British population-based survey of 7353 persons also found no association between severe sexual abuse in childhood (2.9% for women and 0.8% for men) and social class (21).

Both Wetzels’ study conducted in 1992 (5) and the present investigation revealed an inverse relationship between physical maltreatment and social class. The 1992 study recorded the socioeconomic status of the parents in the respondent’s childhood, while we noted the respondent's current socioeconomic status. The class indexes used in our study have ordinal scales and show a class gradient. The lower rates of physical abuse and neglect for children from higher social classes can be explained by a more caring home environment in higher income, better educated segments of the population and a more restrictive style of upbringing in socially disadvantaged groups (22). The negative association between physical and emotional neglect and abuse in childhood and social class index can be explained by the following two hypotheses:

The higher rate of childhood physical neglect in the elderly can be attributed to deprivation during and after World War II.

The response rate of 56% was somewhat lower than those of earlier surveys (23). No further analyses were possible on grounds of data protection; therefore, it could not be established whether respondents and non-respondents differed with regard to clinical and sociodemographic characteristics.

The potential sources of error in the retrospective recording of childhood experiences include incorrect attribution, suggestibility, and distortion owing to subjective logic. The possibility of false-negative statements due to unconscious (memory suppression) or conscious (shame) motives has been discussed exhaustively in the literature (24). In various studies the proportion of adults who recalled a documented instance of sexual abuse in childhood lay between 62% and 81% (25). The relatively high number of respondents with the highest possible score on the minimization/denial scale (8.5%) indicates a possible tendency towards denial by some members of our sample. Moreover, some people who would be classified as having suffered maltreatment on objective criteria do not view themselves as maltreated—not in the sense of intentional dissimulation, but because they grew up in an environment where maltreatment of children was the rule. This distorted self-perception cannot be detected with the CTQ, only with structured interviews on traumatization in childhood (10). The CDC’s broad definitions of abuse and neglect and the CTQ’s low threshold for mild to moderate abuse continue to lead to high reporting of low-grade maltreatment in childhood.

The retrospectively reported frequencies and correlations of the various forms of maltreatment in childhood and adolescence in this survey of a representative sample of the German population correspond to the results of a population-based German study conducted in 1992 and recent investigations in the USA. Physical and emotional neglect are less frequent in younger generations than among those whose childhood and adolescence fell during World War II and the years immediately thereafter. 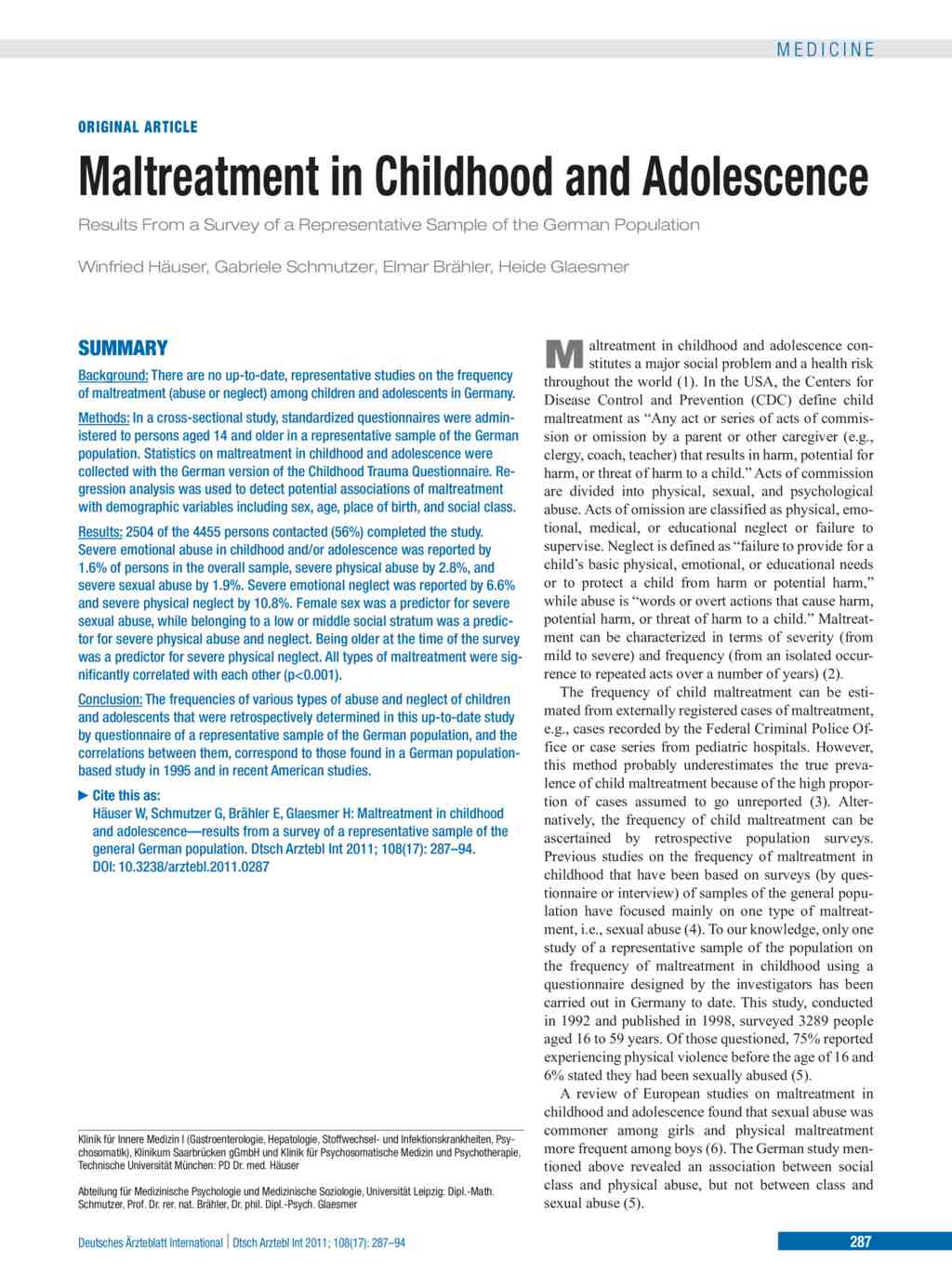