Method: Selective review of the literature.

Results: Anesthesia-related mortality has fallen from 6.4/10 000 in the 1940s to 0.4/100 000 at present, largely because of the introduction of safety standards and improved training. The current figure of 0.4/100 000 applies to patients without major systemic disease; mortality is higher among patients with severe accompanying illnesses, yet in this group, too, perioperative mortality can be reduced by appropriate anesthetic management. Moreover, the use of regional anesthesia can also improve the outcome of major surgery.

Conclusion: A recent increase in the percentage of older and multimorbid patients among persons undergoing surgery, along with the advent of newer types of operation that would have been unthinkable in the past, has led to an apparent rise in anesthesia-associated mortality, even though the quality of anesthesiological care is no worse now than in the past. On the contrary, in recent years, better anesthetic management has evidently played an important role in improving surgical outcomes.

These were the poignant words used by the first holder of a chair in anesthesiology in Europe, Sir Robert Macintosh, some 60 years ago, in order to emphasize that administering anesthesia is always dangerous and for this reason should be undertaken only by physicians with specialist qualifications (1). A study conducted in 1948 to 1952 in 10 university hospitals in the US confirmed the assessment of the riskiness of anesthesia in Macintosh’s lifetime (e1). In 599 500 patients, the study found that anesthesia-associated mortality (Box gif ppt) was 64/100 000 operations. Extrapolated to the population this means a death rate of 3.3/100 000. In the following decades, new techniques and monitoring options were developed, and anesthetists received better training, so that the death rate was reduced. In the early 1940s, anesthesia-associated mortality was estimated to be 1/1000, and in the 1960s it was still high, at 0.8/1000 (e2); the 1970s and early 1980s saw a reduction to 10 to 30/100 000 (e3, e4). Data collected between 1965 and 1969 had shown a dramatic increase in perioperative mortality in emergency patients and patients with severe comorbidities (ASA classes 3 to 5, Table 1 gif ppt) (e2).

In tandem with the introduction of extended safety standards—for example, pulse oximetry and capnometry—a further relevant reduction in anesthesia-related mortality was achieved (Box 1). At the end of the 1980s, the death rate was merely 0.4/100 000 anesthetic procedures (2, e5).

According to a calculation based on data from 56 member states of the World Health Organization (WHO), some 230 million major surgical procedures are being carried out under anesthesia worldwide every year (3). In the industrialized nations, the estimated perioperative complication rate is 3% to 16%; in 0.4% to 0.8% (about 1 million patients) of all cases the result is lasting damage or death (e6, e7). Two studies have investigated the role of anesthesia-associated deaths.

On the basis of the ICD-10 codes that relate to anesthesia-associated complications, the authors of an epidemiological study in the United States evaluated death certificates from the years 1999 to 2005 (4). In an estimated 105.7 million surgical cases, they found a total of 2211 anesthesia-related deaths and calculated an anesthesia-associated death rate of 8.2/1 000 000 hospital discharges. Of these deaths, 867 occurred in hospital, 348 in outpatient settings, 46 on admission to hospital, 258 after discharge, and 349 in a hospice or nursing home. No specific details were reported for the remaining deaths.

The percentage proportions are as follows:

Among the remaining complications (7.3%) that resulted in death were malignant hyperthermia (1%) and intubation problems (2.3%). Anesthesiological complications were stated as the cause of death in only 241 cases (2.2/1 000 000).

A European study published in 2006 used a different methodological approach (5). The investigators evaluated 537 459 death certificates from 1999. On the basis of ICD-9 they set out a list of codes that relate to anesthesiological care or anesthesia-associated complications. In addition, they used all codes that relate to complications after medical, gynecological, or surgical interventions. The death certificates were evaluated on the basis of this list. After identifying a total of 1491 deaths the study authors sent questionnaires to the issuers of the death certificates, so as to verify the influence of anesthesiological care. Among the deaths that were exclusively related to anesthesiological measures, they found a mortality rate of 0.69/100 000 and in those cases that were partly associated with anesthesia, of 4.7/100 000 cases. Furthermore, the results of the study showed an association between anesthesia-related deaths and patients’ age or ASA status (Table 2 gif ppt).

A single-center study from the US investigated all perioperative deaths (within 24 h postoperatively) for a period of 10 years (6). In 72 595 anesthetic procedures, 144 cases of perioperative cardiac arrest were reported. The risk rose with patients’ increasing ASA status. Of these 144 cases, a total of 15 were declared to be anesthesia-associated; seven of these patients died. The causes of death were drug-related events, problems in respiratory management, and a myocardial infarction. The anesthesia-associated death rate was reported to be 5.5/100 000.

A Dutch case-control study investigated the risk factors of anesthesiological management relative to postoperative morbidity and mortality within 24 hours (7). An early study published by the same working group, which investigated 24-h postoperative mortality in 869 483 patients, the authors identified 807 deaths; 119 of these were anesthesia-associated deaths (e8). The 807 deaths were compared with 883 other cases in order to identify risk factors within anesthesiological management. The authors found a significantly reduced risk for the following constellations:

In conclusion: In purely numerical terms, anesthesia-associated mortality has risen again. The reason for this increase is not a decrease in the quality of anesthesiological care, but an increase in the proportion of elderly, often multimorbid, patients undergoing surgery. The reasons are:

The risk of aspiration in the context of general anesthesia has been constant for decades, at 1 per 2000 to 3000; pregnant women after the second trimester have a higher risk of approximately 1/1000 (e9, e10). A recent study showed a decreasing incidence of aspiration in pregnant women (8). Fortunately the mortality of bronchopulmonary aspiration is low, and the dreaded acid-associated pneumonitis is rare (Mendelson syndrome [chemical pneumonitis, massive bronchospasm, severe disruption of gas exchange] 8%, mortality 3%).

The cricoid pressure taught thus far for emergency intubation is not likely to prevent aspiration. However, administration of antacids, H2 antagonists, and proton pump inhibitors before intubation lowers the risk of aspirating gastric acid with a pH <2.5. This does not improve the outcome after aspiration, however (9).

According to what is currently known, relaxing the nil by mouth rule (clear fluids up to 2 hours before anesthesia is initiated) has not resulted in an increase in the risk of aspiration (e11).

Intraoperative awareness is still feared by many patients, which can lead to chronic psychological problems if a patient remembers intraoperative events (10). The risk for awareness is 0.1% to 0.15%, younger female patients and cardiac or obstetric surgery carry a higher risk, at 0.26% (e12, e13). The risk of developing long-term neuropsychological disorders in awareness patients is 10% to 33% (11). Awareness phenomena are perceived as less stressful in the absence of pain than awareness accompanied by an intense experience of pain (11). Sufficiently deep anesthesia and optimized use of muscle relaxants can help avoid awareness.

Muscle relaxants are an indispensable element of anesthesiological practice. They facilitate endotracheal intubation and improve surgical conditions in intraabdominal and endoprosthetic procedures, especially in emergencies. Arbous et al. (7) have statistically calculated that lowering perioperative mortality by antagonizing of muscle relaxants can be achieved at the conclusion of surgery. This enables the indirect conclusion that Postoperative Residual Curarisation (PORC) probably has a negative effect on patients’ outcomes. The risk for postoperative pulmonary complications correlates with:

In spite of this, in defining an indication for a regional anesthetic procedure, possible complications need to be borne in mind, such as neural damage, paraplegia after central neuraxial blockades, and infectious complications. Furthermore, a multitude of operations cannot be performed under regional anesthesia but require general anesthesia.

The following risk factors were identified for the development of epidural hematomas:

To reduce the risk of epidural hematomas, the guidelines for administering anticoagulants and regional anesthesia need to be strictly adhered to (18).

Infectious complications are another risk of continuous catheter procedures. The risk ranges from mild local infections to epidural abscesses. In the context of the Network for the Safety of Regional Anaesthesia [sic] in Germany, initiated by the German Society of Anaesthesiology [sic] and Intensive Care Medicine (Deutsche Gesellschaft für Anästhesiologie und lntensivmedizin, DGAI) and the Professional Association of German Anesthetists (Berufsverband Deutscher Anästhesisten, BDA), the incidence of infection was studied on the basis of the standardized documentation for a total of 8781 catheter procedures (22 112 catheter days) for regional anesthesia (19). Neuraxial procedures were performed in 5057 cases and 3724 cases were peripheral catheter procedures. In total, 4 severe, 15 moderate, and 128 mild infections were documented. Neuraxial procedures were found to be associated with a higher rate of infection than peripheral procedures (2.7% vs 1.3%). Further risk factors were:

Perioperative antibiotic prophylaxis or existing diabetes mellitus were not associated with an increase in the rate of infections.

Although we have shown that anesthesia-associated mortality is thankfully still very low, a study of 1064 patients found that the overall perioperative mortality within the first postoperative year is disturbingly high (20). The researchers found that after an operation under general anesthesia, 5.5% of all patients died within one year, and in patients older than 65 years this proportion rose to 10.3%. Death within the first year after an operation was mostly associated with patients’ pre-existing comorbidities, but the cumulative duration of very deep anesthesia and intraoperative systolic blood pressure measurements of less than 80 mm Hg were found to be independent predictors for significantly raised mortality. As early as in 2003, the development of perioperative fast-track concepts drew attention to the fact that anesthesia has an important impact on patients’ postoperative recovery (21). Postoperative need for treatment can be reduced by means of anesthesiological management as follows:

In their editorial “To err is human,” Hardman and Moppett wrote: “Errors are an inevitable part of anaesthetic [sic] practice. Anaesthetists [sic] are humans and humans make errors” (e17). For these reasons, in spite of the continuing low mortality in the context of anesthesia, a need exists to further improve patient safety. One step in the right direction was taken with the adoption of the Helsinki Declaration on Patient Safety in Anesthesiology, which was written as a collaborative project by the European Board of Anaesthesiology (EBA) and the European Society of Anaesthesiology (ESA) (23). This declaration challenges all medical centers for anesthesiology to adopt a bundle of measures to optimize patient safety.

In addition, a particular focus should be on the further optimization of training in anesthesiology (e18). This includes not only specialty training leading to the qualification of anesthesiologist, but continuing safety training should also include simulator training (e19, e20). Furthermore, we wish to remind our readers of the “parallel anesthesia” judgments of the German Federal Court of Justice, which laid down legal minimum requirements and has drawn the conclusion that anesthesia should be administered only by an anesthesiologist who has undergone specialist training or by another physician—if that physician is reasonably advanced in his or her training—under the supervision of an anesthesiologist, with eye contact and verbal communication between the two as an absolute sine qua non (24).

The optimization of perioperative processes, in which anesthesiology assumes a key role, has become increasingly important in the last few years. Recent studies have shown that anesthesiological management can have a relevant influence on patients’ outcomes. Results from recent studies also indicate that anesthesiological therapy may have a relevant impact on a patient’s immune function (25). In order to quantify this role in greater detail, further studies are needed, especially prospective studies with large case numbers. Additionally we can state that anesthesia-associated mortality in patients without relevant systemic disease continues to be low. However, the increasing numbers of elderly and multimorbid patients, who would have been considered inoperable in the past and who nowadays are subjected to extended procedures that were unthinkable in the past, has meant that anesthesia-associated mortality has risen again in numerical terms.

Conflict of Interest statement
PD Dr André Gottschalk has received honoraria for speaking from Baxter, B. Braun, and MSD. He was also a member of the advisory board of Baxter, on the subject of “continual wound infusions of local anesthetics.”
Professors Zenz, Standl, and Van Aken declare declare that no conflict of interest exists. 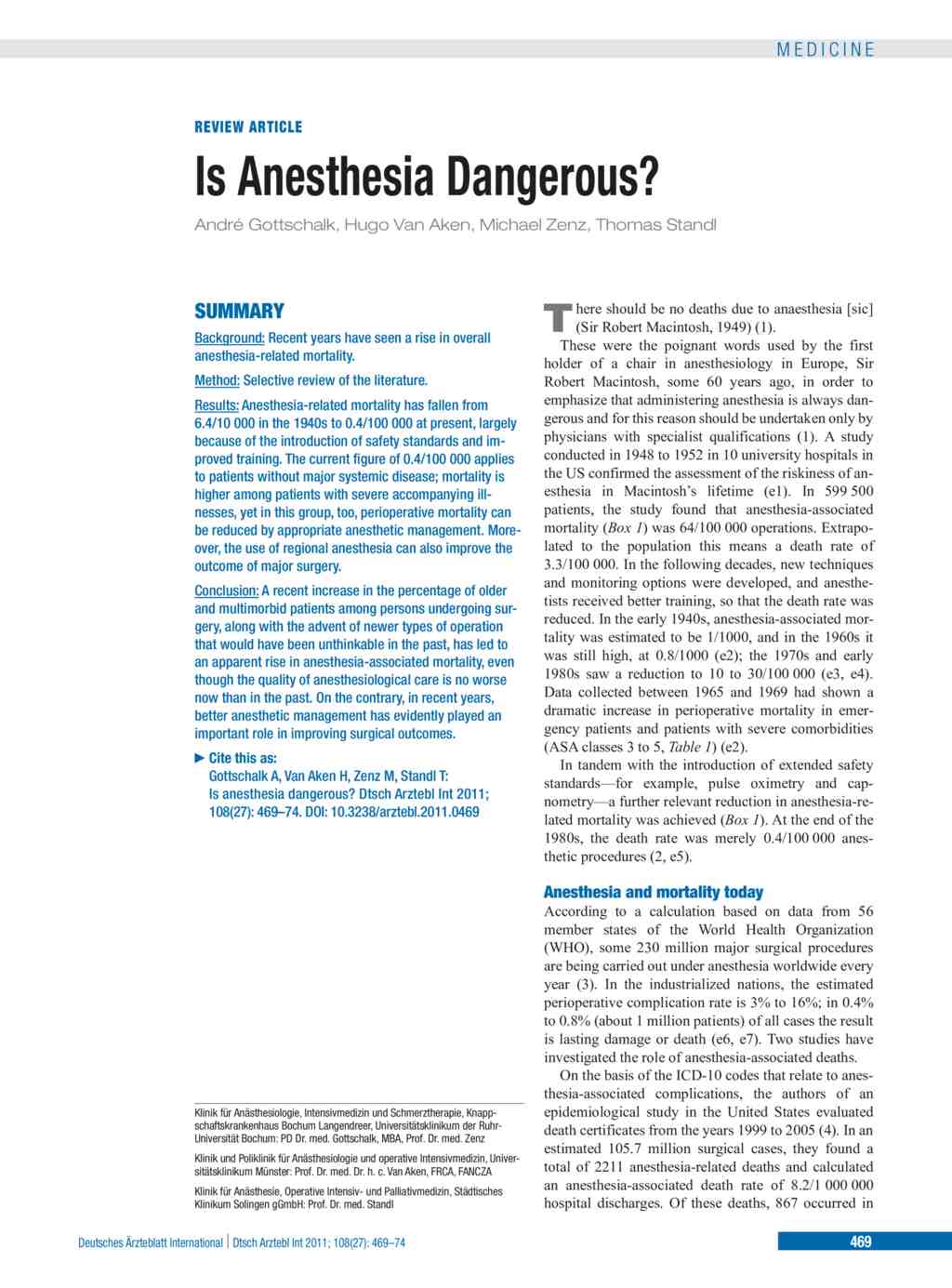