Regional Differences in the Use of Hysterectomy

Removal of the uterus, one of the standard procedures in surgical gynecology, is currently in the throes of dynamic development. Only 15 years ago numerous diseases of the uterus were treated by means of hysterectomy, but the situation has now changed dramatically. Whereas earlier the uterus was resected to manage large myomas, menstrual disorders, symptomatic uterine prolapse, and of course cancer, this is no longer the case. The transformation is largely due to the trailblazing work of one gynecologist, Professor Kurt Semm of Munich, a pioneer of laparoscopic surgery who introduced minimally invasive techniques in gynecological surgery (1). Where he led, other branches of surgery then followed. Let us remember that Kurt Semm was the surgeon who performed the very first laparoscopic appendectomy (2). Minimally invasive surgery has led to a new approach to hysterectomy and supported many women in their desire to preserve their uterus.

As described in a new epidemiological study by a team led by Professor Andreas Stang (3), the rate of hysterectomy in Germany in 2005 and 2006 was still much higher than in Scandinavia, but lower than in the USA. Naturally a survey like this represents a snapshot. To the authors’ great credit, they point out that hysterectomy is by no means the surgical answer to all problems. Nevertheless, more precise analysis would have permitted further-reaching conclusions. Had the authors evaluated the proportion of organ-sparing operations for myoma or adnexal cysts, for example, their figures might have looked quite different. A wider picture would have been more instructive.

A key message of the study is that across Germany the hysterectomy rate is lowest in the city-state of Hamburg and highest in Mecklenburg–West Pomerania, a state covering a large area. This shows that the use of modern techniques is increasing in urban areas that feature a high concentration of centers offering minimally invasive surgery. Evaluation of the data from other large cities such as Düsseldorf, Hannover, Frankfurt and Munich would probably have shown the same picture as in Hamburg. The situation is most likely similar for other innovations such as ultrasound treatment and embolization of myomas; the latter procedure, however, restricts fertility.

The reason for these differences among the federal states of Germany is certainly that minimally invasive surgery has not spread to all areas. In my own experience, this is even more true for the USA. We now know that radical hysterectomy (Wertheim’s operation) is not obligatory even in a patient with a small cervical carcinoma who still wants children. A successful outcome can be achieved by transvaginal trachelectomy according to Dargent (4) or even by a completely endoscopic procedure (5). When such surgery is followed by lymphadenectomy the uterus can be spared, and various studies have reported substantial conception rates (6). 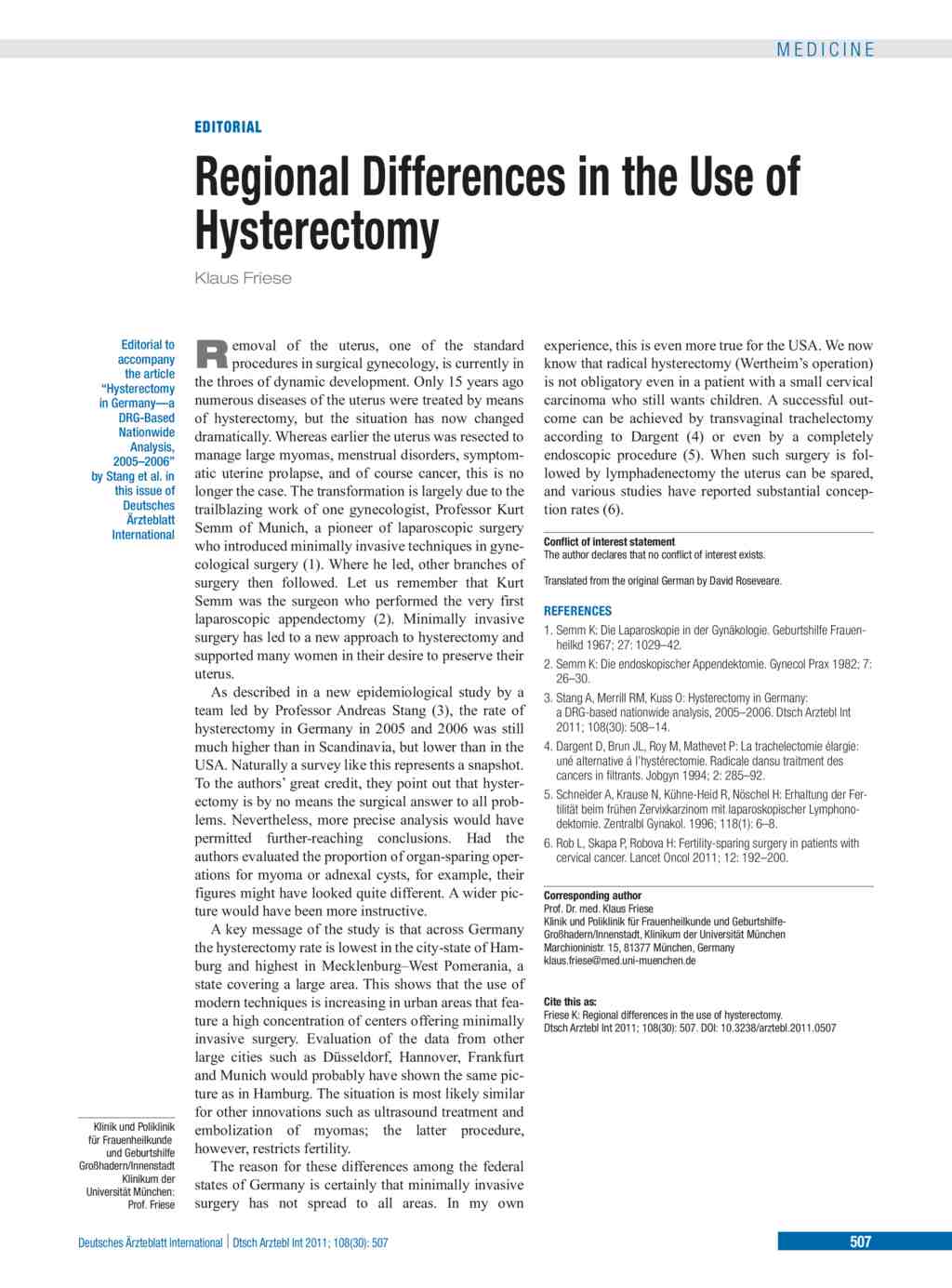