Background: Hysterectomy is among the more common surgical procedures in gynecology. The aim of this study was to calculate population-wide rates of hysterectomy across Germany and to obtain information on the different modalities of hysterectomy currently performed in German hospitals. This was done on the basis of nationwide DRG statistics (DRG = diagnosis-related groups) covering the years 2005–2006.

Methods: We analyzed the nationwide DRG statistics for 2005 and 2006, in which we found 305 015 hysterectomies. Based on these data we calculated hysterectomy rates for the female population. We determined the indications for each hysterectomy with an algorithm based on the ICD-10 codes, and we categorized the operations on the basis of their OPS codes (OPS = Operationen- und Prozedurenschlüssel [Classification of Operations and Procedures]).

Conclusion: Hysterectomy rates vary markedly from one region to another. Moreover, even though recent studies have shown that bilateral ovariectomy is harmful to women under 50 who undergo hysterectomy for benign disease, it is still performed in 4% of all hysterectomies for benign indications in Germany.

In many countries hysterectomy is among the more common surgical procedures in gynecology. In Germany, for example, around 153 000 hysterectomies were carried out in 2006 (1). The frequency of hysterectomy varies widely from region to region (2–7) and over the course of time (2, 7–9). Hysterectomy rates are affected not only by the incidence of relevant diseases but also by a number of other factors. These include:

Interestingly, the increasing prevalence of obesity also influences rates of hysterectomy, because obese women are at higher risk of bleeding and infections during and after hysterectomy (13, 14). The populationwide hysterectomy rate may serve as an indicator of the healthcare status of women with gynecological diseases in Germany.

Since 2004 the remuneration of German hospitals for treatment of inpatients has been regulated by means of a system of diagnosis-related groups (DRG). With very few exceptions (treatment in a small number of psychiatric and psychotherapeutic units, treatment of soldiers in army hospitals, treatment in prison hospitals), all individual inpatient stays, including the diagnosis and procedure codes, are entered in the nationwide DRG database. The first epidemiological studies based on DRG statistics have recently been published for an international readership (15–18). Since day-surgery hysterectomy is rare in Germany, the DRG data accurately reflect the rates of hysterectomy in this country (19). Given that hospitals cannot be reimbursed for operations outside the DRG system, it can be assumed that all hysterectomies carried out were also documented.

The goal of this study, based on the nationwide DRG statistics for 2005 and 2006, was to determine the populationwide hysterectomy rates and the frequencies of the different types of hysterectomy performed in hospitals in Germany.

Invoicing by DRG became legally compulsory for German hospitals in 2004 with the passage of a law regulating reimbursement for inpatient treatment. Hospitals are obliged by law to transmit their data annually to the Institute for the Hospital Remuneration System (InEK). After testing for plausibility, InEK passes the anonymized hospital data to the Federal Statistical Office (FSO). The FSO provides the DRG data from 2005 onward for the purposes of scientific study. We chose to analyze the figures for the treatment years 2005 and 2006 (total 17.4 million inpatient stays by women). At the end of each inpatient stay, ICD-10 codes (e1, e2) for one primary diagnosis and up to 89 subsidiary diagnoses can be assigned. Furthermore, up to 100 procedures can be coded according to the OPS (Operationen- und Prozedurenschlüssel [Classification of Operations and Procedures]) (e3, e4).

We identified hysterectomy operations by the OPS coding:

A total of 307 230 hysterectomies were carried out. Of these operations, 2215 (0.7%) were excluded from analysis because the patient’s place of residence was outside Germany (1645, 0.5%), unknown (249, 0.1%), or the patient was homeless (321, 0.1%). Thus all final analyses covered 305 015 hysterectomies. A hierarchical diagnostic algorithm often used and described in the international literature (3, 18, 20) was employed to define six groups of indications for hysterectomy based on principal and subsidiary diagnoses:

Overall, 99% of the hysterectomy procedures were characterized by a single ICD-10 code. The remaining 2981 operations were manually assigned to one of the types of hysterectomy. The following surgical approaches were distinguished:

We calculated crude, age-specific, and age-standardized hysterectomy rates (number of hysterectomies per 100 000 person-years). The denominator of the rates was the mean annual population. The standard age was derived from the population of the Federal Republic of Germany (women only) on December 31, 2005. Because the rates for 2005 and 2006 were practically identical, we report only findings for the study period as a whole. Weighted coefficients of variation were calculated to describe the variability of hysterectomy rates across the 16 federal states.

Overall, 23% of hysterectomies were accompanied by concomitant bilateral ovariectomy. The latter was particularly common among operations for carcinoma in situ of the female genital organs and for endometrial adenomatous hyperplasia. In hysterectomy for benign diseases of the female genital organs the rate of bilateral ovariectomy was 12% for all age groups together, but depended strongly on age: In women under 50 the rate was only 4%, compared with 26% in those aged 50 or more (Table 2 gif ppt, Figure gif ppt).

In cases of genital prolapse without uterine pathology, one should first explore the options for conservative treatment or uterus-sparing surgery (fixation of uterus or vagina) before considering hysterectomy (S1 guideline on genital prolapse [e6]). Hysterectomy is viewed as the most effective treatment for uterine adenomyosis in women who no longer wish to become pregnant. Those who still want children or prefer to preserve the uterus should initially be treated by means of interventional radiology procedures such as embolization and MRI-guided focused ultrasonographic ablation as part of a study, if at all possible. Alternatives to hysterectomy include gestagens, hormonal contraceptives, and levonorgestrel intrauterine systems (S2 guideline on diagnosis and treatment of endometriosis [e7]). In women with heavy menstrual bleeding, hysterectomy should be considered only when other treatment options have failed, are contraindicated, or are refused by the patient, or when the patient expressly requests hysterectomy (NICE guideline [e8]). Myomectomy and uterine artery embolization are viewed as safe and effective alternatives to hysterectomy in patients with symptomatic leiomyoma (guideline of the American College of Obstetricians and Gynecologists [e9]).

The DRG database does not permit clear medical classification of menopausal status. Using age ≥50 as the definition of (peri)menopausal or postmenopausal status, 26% of women in this category treated by hysterectomy had concomitant bilateral ovariectomy. In women under 50, the proportion was only 4%. Whiteman et al. found that in 2000–2004, 37% of all women in the USA who underwent hysterectomy for benign diseases of the female genital organs also had bilateral ovariectomy (2). The corresponding proportion in Germany is far lower, at 3%.

Although the present study probably paints a representative picture of hysterectomy in Germany in 2005 and 2006, it does have some limitations. The analysis was based on the codes assigned to diagnoses and procedures; however, these codes do not always fully reflect the often complex constellations of symptoms and diagnoses that lead to the decision to perform hysterectomy (24). The data do not, for example, permit analysis of the precise clinical reasons for deciding to carry out subtotal hysterectomy, concomitant bilateral ovariectomy, or open abdominal hysterectomy.

Furthermore, the data analyzed are for treatments carried out in 2005 and 2006. More widespread availability of non-surgical treatment options and minimally invasive techniques in the ensuing years may have changed the rates of hysterectomy in Germany.

Moreover, InEK’s quality control of the DRG data supplied to us was not thorough enough to enable us to validate the coding of the diagnoses and procedures. The anonymization of the DRG data rules out any validation by comparing the assigned codes with a representative sample of patients’ case notes. DRG validation studies at particular hospitals would also be of no assistance, for two reasons: first, they would not be representative of the population as a whole, and second, routine documentation in hospitals cannot necessarily be seen as the gold standard for validation. Therefore, the plausibility of our findings has to be critically considered in light of existing clinical and epidemiological knowledge and other data.

Comparison of the relative frequency of organ damage in hysterectomy (1.4% of 149 456 operations) in the BQS report of 2006 (25) with that of the coded complication of perforation (ICD-10: T81.2, unintentional perforation of a blood vessel, nerve, or organ during an intervention) in the DRG data set (1.1%) shows great similarity. Plausibly from the clinical point of view, complications (ICD-10: T81.0–T81.4) were coded much more frequently for conversion from vaginal or laparoscopic hysterectomy to open abdominal hysterectomy than for hysterectomy that did not require conversion. Another way of assessing the quality of the DRG data would be to compare them with data from other sources. Such a comparison was recently performed for testicular tumors, showing excellent agreement between population-based cancer registries and the DRG data (16).

The overall rate of hysterectomy in Germany in the years 2005 and 2006 was 362 per 100 000 person-years. Different regions of the country differ considerably in their hysterectomy rates. Bilateral ovariectomy, carried out in 4% of hysterectomies for benign diseases of the female genital organs in women under 50, has negative consequences according to recent studies. 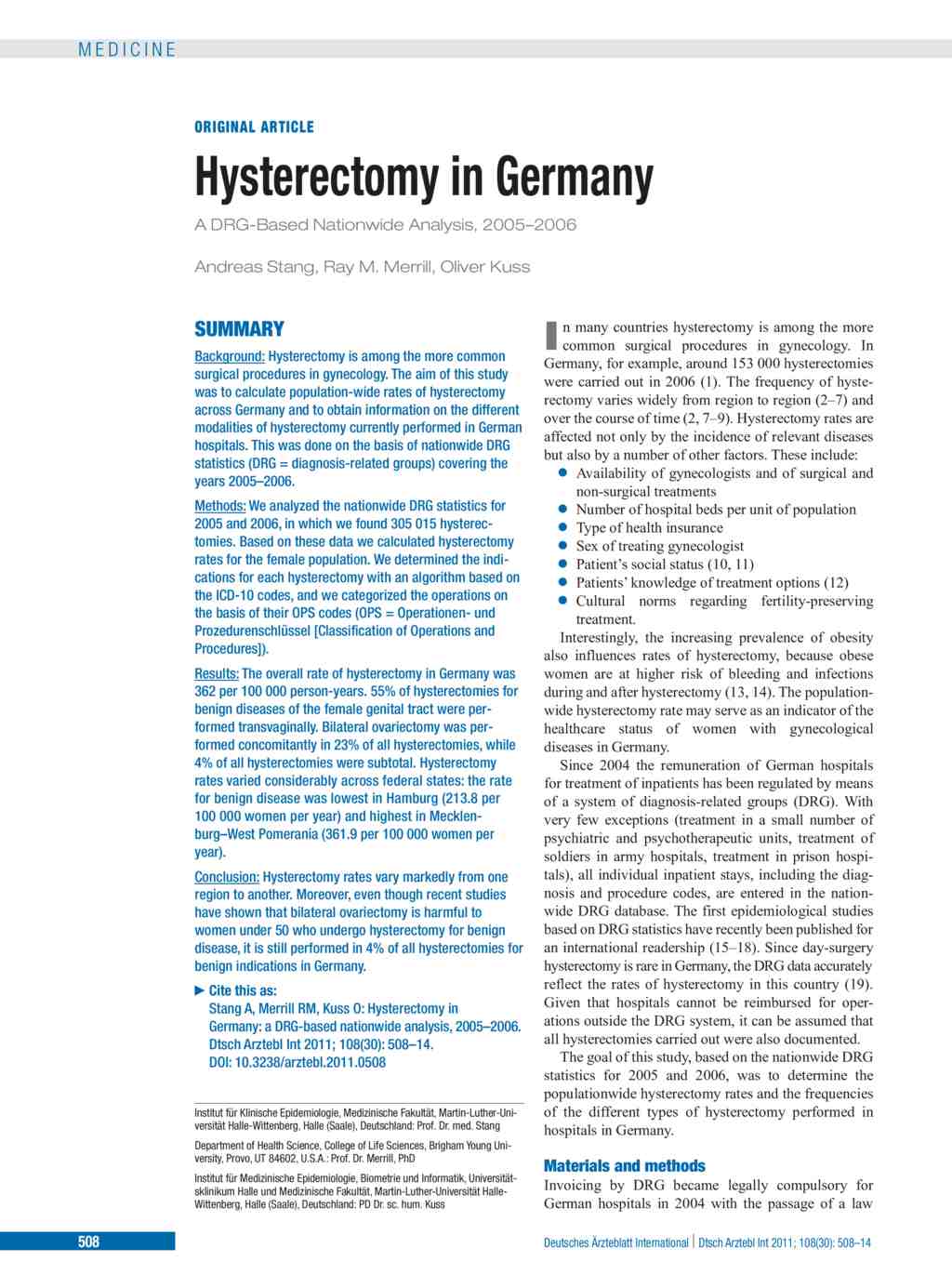