There Is Still More to Be Done

Dtsch Arztebl Int 2011; 108(50): 854-5. DOI: 10.3238/arztebl.2011.0854
An editorial to accompany the article “Prescription Prevalence and Continuing Medication Use for Secondary Prevention After Myocardial Infarction: the Reality of Care Revealed by Claims Data Analysis” by Sandra Mangiapane and Reinhard Busse in this issue of Deutsches Ärzteblatt International

The article by Mangiapane and Busse in this issue of Deutsches Ärzteblatt International, entitled “Prescription prevalence and continuing medication use for secondary prevention after myocardial infarction” contains both good news and bad news. The good news is that combination therapy with a beta-blocker, a statin, an angiotensin-converting-enzyme (ACE) inhibitor, and clopidogrel for secondary prevention in coronary heart disease (CHD), as recommended by published guidelines (2), is initially prescribed for every third patient who sustains an acute myocardial infarction, while the individual substances are prescribed at rates varying from 61% to 82%. Combination therapy of this type would fulfill the requirements for successfully applied secondary prevention, which has played a major role in halving the number of deaths from cardiovascular disease in the last 20 years and has obviated the need for many coronary interventions (3). This was shown most impressively in the COURAGE trial (4). So far, so good.

And the bad news? It seems, unfortunately, that patients—and perhaps their physicians, too—fail to maintain their commitment to this form of treatment over time: the compliance figures fall dramatically one, two, and five years after myocardial infarction. Five years later, only 10% of patients are still taking acetylsalicylic acid (ASA), 17% a statin, 31% an ACE (angiotensin converting enzyme) inhibitor, and 36% a beta-blocker. We are not told how many patients are still taking the entire combination.

So much for the dream of effective and enduring secondary prevention in routine clinical practice. There is, however, one positive exception: 90% of patients who undergo a percutaneous coronary procedure for the implantation of a medication-coated coronary stent are still taking clopidogrel six months later—a compliance rate that is almost as high as we would like to see in our patients.

Incompliance with guidelines: a widespread problem

The phenomenon of patients’ failure to maintain compliance with a drug regimen for cardiovascular prevention and rehabilitation is by no means new. Nor is the problem of guideline incompliance restricted to cardiovascular medicine (5, 6); it is found in many other medical fields as well (7, 8).

For many patients who have sustained a myocardial infarction, the first anniversary of the event seems to represent a magical divide. By then, the fear of a further infarction has abated to the extent that complacency is ready to take over. Perhaps we physicians, too, fail to keep up our resolve to hold patients to the regimen that is best for them. While practice budgetary considerations may play a role, there may also be concerns about the efficacy of drugs used for secondary prevention: The evidence that these really lower morbidity and mortality for longer than one to three years after myocarcial infarction is scanty.

With regard to beta-blockers in particular, there remains the question whether the findings from trials carried out 20 to 30 years ago, in the era before ACE inhibitors, statins, thrombolysis, and percutaneous coronary interventions, still suffice to justify giving beta-blockers for more than one year after a myocardial infarction. There is no convincing answer to this question, not even in the published guidelines themselves (9).

Insurance claims data as an instrument for health care research

A further question arises as we read the article by Mangiapane and Busse: Can routinely obtained data, such as insurance claims data, really serve as a reliable basis for sound health services research? It seems the findings presented here do indeed reflect prescribing practices accurately for the patients who were studied. The limitations of the study are discussed by the authors themselves. In any case, we should not expect too much from this type of study. Knowing whether a patient has taken a prescribed drug is only half the story; we would actually like to know whether he or she has really taken the recommended maximal dose that is needed to achieve the benefits found in the clinical trials, e.g., reduced mortality. In particular, as far as beta-blockers are concerned, it would be even better to know the patient’s heart rate at rest while taking the drug; this is now a very well documented prognostic factor in patients with CHD and congestive heart failure (CHF) (10, 11). The German National Disease Management Guideline on Chronic CAD (9) currently requires the use of a beta-blocker to lower the heart rate at rest to within the range of 55–60/min; in the updated guidelines, the target is likely to be raised to 70/min. Our knowledge of the procedural quality of pharmacological secondary prevention after myocardial infarction will remain incomplete until we have data of this type.

Outcome quality as the decisive criterion for the treatment chain

Structural quality and procedural quality are important links in a standardized treatment chain, but the quality of the outcome is the decisive criterion. It follows that health services research based on insurance claims data can only take us so far. The only information about outcome contained in the article by Mangiapane and Busse is the statement that 4% of patients sustained a second infarction over the period of follow-up. More thorough documentation of the quality of the outcome in long-term secondary prevention with drugs after myocardial infarction would require a complex research plan, consisting of a combination of classic randomized clinical trials, registry data, non-interventional studies, cluster-randomized studies, and studies such as this one (12).

The study by Mangiapane and Busse is a fine example of the use of simple methods in health services research to arrive at valid and important conclusions. The finding of low long-term compliance with the recommended drug regimen for secondary prevention after myocardial infarction is a disappointment, but not really a surprise. For the near future, at least, this problem admits of no simple solution (12). It seems to me that the best way to ensure patient compliance is to establish a durable physician–patient relationship based on mutual trust. 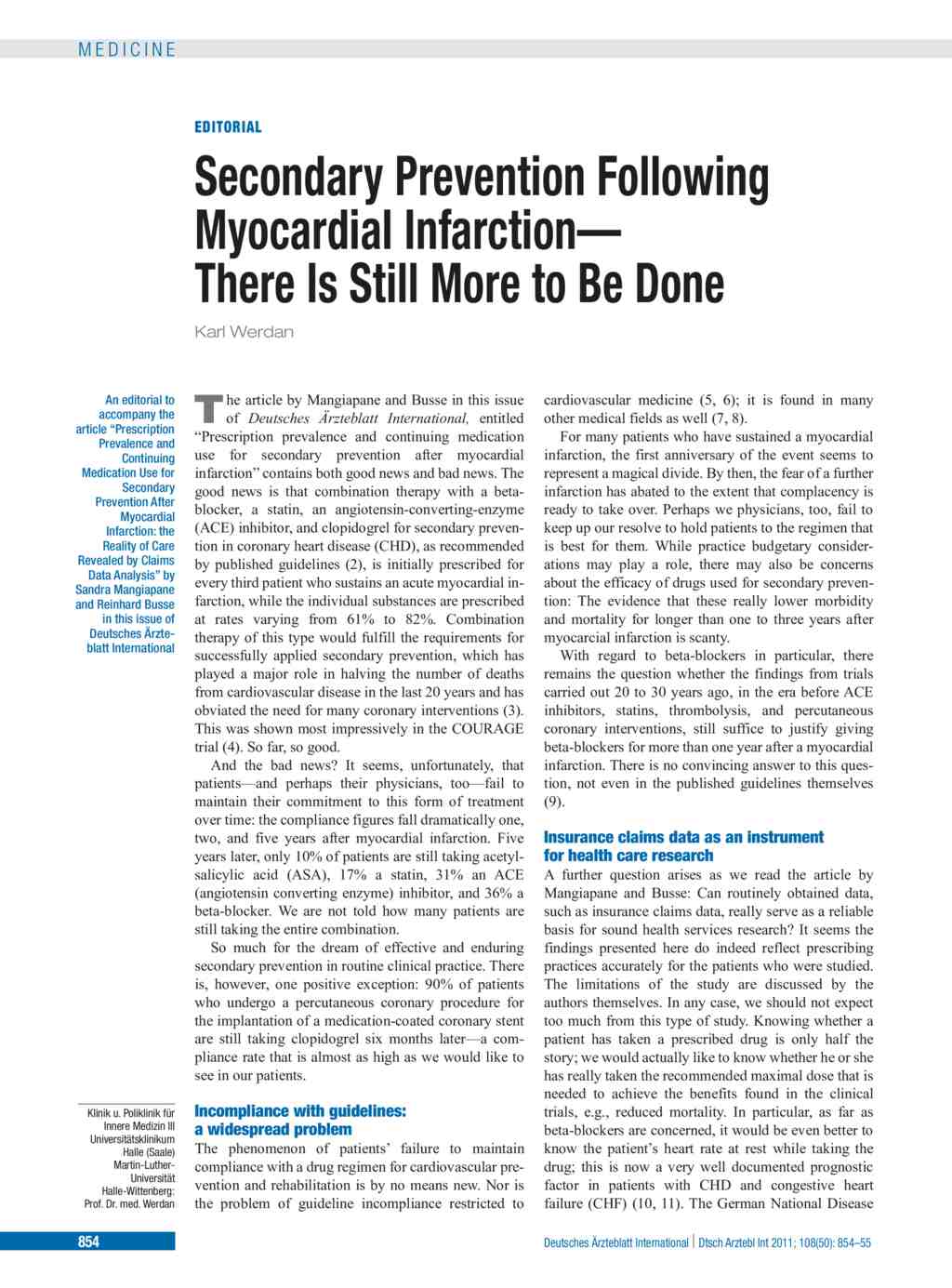