Increased prescription of opioids leads to improved care, particularly for patients with cancer pain. If you share that opinion, you may find you change your mind about the situation in Germany after reading the article “Increase in Opiate Prescription in Germany Between 2000 and 2010: A Study Based on Insurance Data” by Ingrid Schubert, Peter Ihle, and Rainer Sabatowski (1).

There was indeed a 37% increase in the rate of opioid prescription in the authors’ sample between 2000 and 2010, together with a 109% increase in total daily doses. Distinguishing between different preparations of WHO step 2 and step 3 opioids and between patients with and without cancer disease shows the following:

Despite all the limitations of using routine data from health insurance providers, the study by Schubert et al. highlights some alarming trends. The steep increase in the prescription frequency of immediate release WHO step 3 opioids and the intensification of opioid treatment in patients without cancer disease may point to the same kind of undesirable developments in opioid treatment that have already been described in other European countries and especially in the USA.

The right preparation for the right patient

The term “breakthrough pain” was coined by Portenoy and Mercadante back in the 1990s (2, 3), but has experienced a veritable boom since the introduction of quick-release fentanyl—honi soit qui mal y pense! Breakthrough pain has traditionally been treated with immediate release opioids, particularly WHO step 3 substances. Immediate release fentanyl preparations take effect more rapidly than the “old” substances and remain effective for a defined short period of time, making them well suited for relief of spontaneous, unpredictable breakthrough pain. They are licensed exclusively for the treatment of cancer patients whose pain cannot be adequately relieved by the standard oral or transdermal extended release opioids.

However, much more frequently than is the case with traditional immediate release WHO step 3 opioids, the pharmacological profile of immediate release fentanyl preparations seems to lead to considerable increases in dosage over very short periods of time, abuse, and addictive behavior (4, 5). Against this background, the ongoing study programs in which immediate release fentanyls are being examined with regard to their use and potential licensing for chronic non-cancer-related pain have to be viewed extremely critically.

It is also dubious whether the current German remuneration system provides the right incentives, particularly for the treatment of chronic pain. The system should be modified so as to permit pain treatment according to existing guidelines: Although the benefit of medicinal treatment with opioids and invasive therapy for acute pain is uncontested, these measures are not generally indicated for the treatment of chronic pain in patients without cancer disease (6–8). Rather, modern treatment of chronic pain demands a multiprofessional, multimodal approach (6, 7). Interdisciplinary multimodal pain therapy involves the combination of various somatic, physiotherapeutic, psychological, and psychotherapeutic procedures in a predetermined treatment plan for patients with chronic pain syndromes (7, 8). The treatment should be coordinated by a team comprising physicians from one or more specialties, psychologists and/or psychotherapists, and representatives of other disciplines such as physiotherapy and ergotherapy. These treatment structures are not available everywhere.

The situation could be improved by inclusion of chronic pain and its treatment in outpatient specialist medical care as defined in section 116 b of the German Medical Care Structure Act (Versorgungsstrukturgesetz). Interdisciplinary multimodal pain therapy fulfills all of this new law’s requirements: medical knowledge and experience far exceeding general specialist qualifications, an interdisciplinary team, and high demands on structural quality (8).

The database for the study by Schubert et al. contained no information on the reason for prescription; therefore, it cannot be excluded that cancer patients were prescribed opioids for relief of non-cancer pain. Moreover, no statements can be made with regard to inpatient treatment. These limitations highlight the importance of systematic recording of solid data as the foundation for epidemiological research. Data sets such as QUIPS (Qualitätsverbesserung in der postoperativen Schmerztherapie; Quality Improvement in Postoperative Pain Therapy) and KEDOQ Schmerz (Kerndokumentation Qualitätssicherung in der spezialisierten Schmerztherapie; Core Documentation Quality Assurance in Specialized Pain Therapy) can be used as basic data sets in the treatment of acute and chronic pain above and beyond quality assurance measures (9, 10). Ultimately, the intensification of health services research should lead to the creation of a pain registry for pain research and should be an active goal of German policymakers in the science and health sectors. Flaws in provision could then be swiftly identified, the causes analyzed, and specific counter or preventive measures taken.

The Greek physician and anatomist Galen of Pergamon is credited with the sentence “divinum est sedare dolorem” (it is divine to alleviate pain). He meant that the treatment of pain is an art that often exceeds the abilities of a mere mortal. In light of Schubert et al.’s assumption that the link between the prescription frequency of WHO step 3 opioids and increased morbidity shown for other countries is also true for Germany, it seems natural to connect Galen’s sentence with a central concept of the Hippocratic tradition of medical morality: “primum non nocere” (first, do no harm). 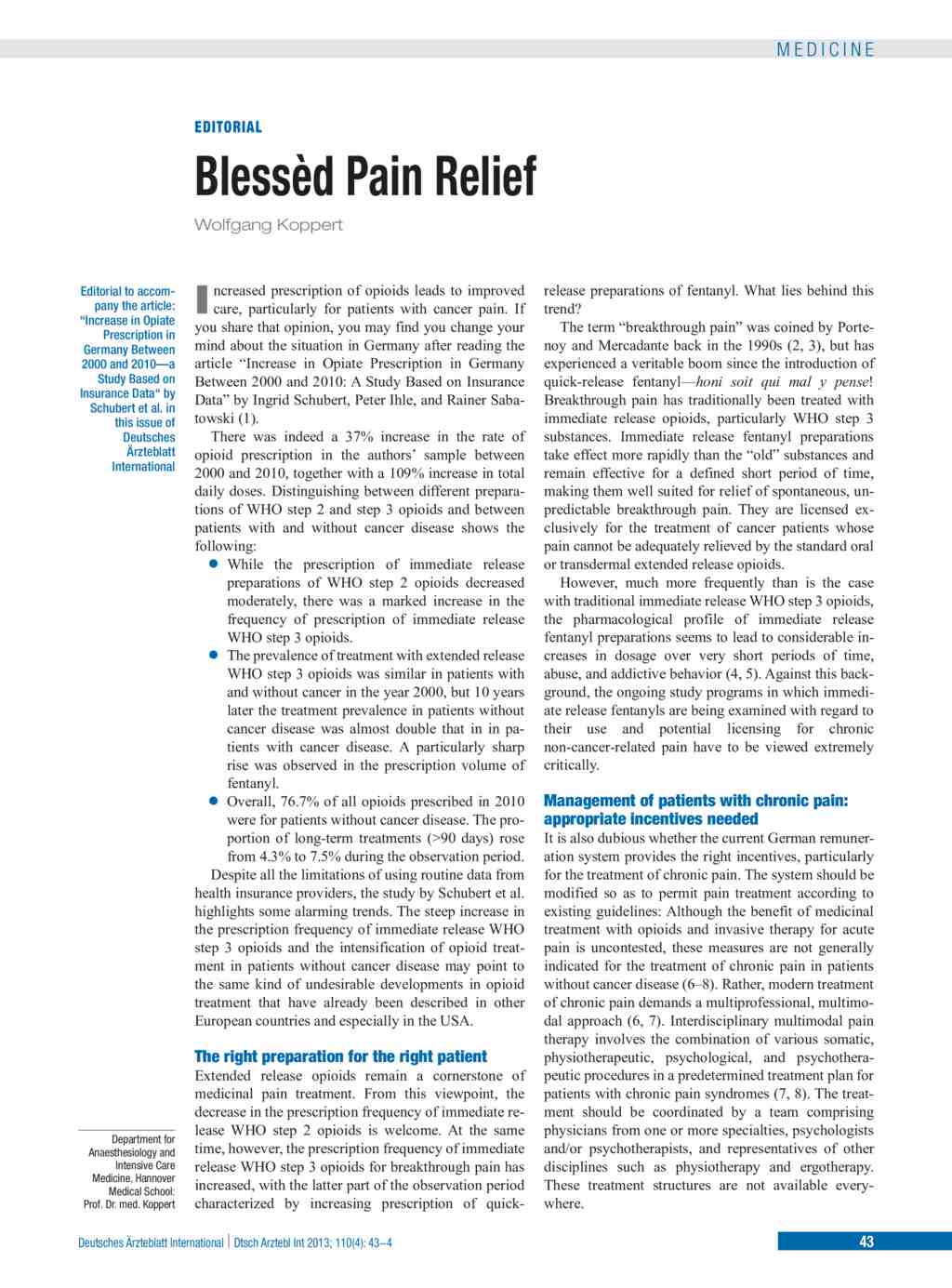