Adverse Drug Events in Older Patients Admitted as an Emergency

The Role of Potentially Inappropriate Medication in Elderly People (PRISCUS)

Background: Lists of potentially inappropriate medications (PIMs) for the elderly, such as the German PRISCUS list, have been published as expert recommendations with the aim of improving drug safety for this patient group. In this study, we tried to determine how often adverse drug events occur in the emergency department and what role PRISCUS medications might play in these events.

Methods: We prospectively reviewed the medical records of 752 patients who were treated in the emergency department (ED) of a level III hospital in Germany for adverse drug events due to medication errors (MEs) and for adverse drug reactions (ADRs). The evaluation was performed in two steps by pharmacologists, clinical pharmacologists, and board-certified internists.

The number and proportion of emergency admissions of elderly patients with multiple morbidities and correspondingly extensive medication plans has been increasing continuously in recent years (1, 2).

Adverse drug events (ADEs) are common reasons for treatment, but are often not recognized as such (1, 3–6). Adverse drug events are caused by either conventional adverse drug reactions (ADRs) (7) or medication errors (MEs) (6) that lead to clinical symptoms. Overall, greater attention to drug therapy safety seems to be necessary in elderly patients.

To identify and prevent risks more easily, lists of potentially inappropriate medications (PIMs) for elderly patients have been developed on the basis of expert consensus. Well-known examples are the Beers list (8), the STOPP and START criteria (9), and, since 2010 in Germany, the PRISCUS list (10, 11). It is assumed that these potentially inappropriate medications are associated with an increased risk of ADEs in elderly patients.

Current studies, however, indicate that PIMs are responsible for only a relatively small percentage of ADEs in elderly patients (1, 12, 13). Moreover, in the international literature on PIMs a substantial percentage of drugs and cases were excluded from analyses, and no distinction was made between MEs and ADRs (1, 14). This raises the question of the extent to which errors caused by methodological shortcomings when data on ADEs were collated led to database bias, causing the potential number of PIMs to be underestimated. There are currently no studies available on the occurrence of such events in acute clinical care for drugs on the PRISCUS list.

This study therefore aimed to investigate the effects of PIMs on elderly patients admitted as emergency cases regarding ADEs, involving and not involving MEs.

This prospective study was part of a multiple-phase study on optimizing the medication process in acute clinical care. It was funded by the German Health Ministry as part of its 2010–2012 Drug Therapy Safety Initiative (15). In the first of the three study phases (involving at least 750 patients) all patients admitted to Fürth Hospital’s central emergency admissions department over a three-week period in September 2010 who had no trauma or outward signs of injury were enrolled in the study.

Fürth Hospital has 749 beds and is a specialized care and teaching hospital within Friedrich-Alexander University of Erlangen–Nuremberg. Every year, approximately 45 000 patients receive inpatient or outpatient treatment at its interdisciplinary central admissions department. The hospital is the sole care provider for emergency patients from the city and region, with a combined population of more than 226 000. Approval by Friedrich-Alexander University’s Ethics Committee as well as the consent of the hospital’s data protection officers were obtained for the study.

All patients admitted as emergency cases as stated above were analyzed using psydonomized, electronic patient records by pharmacists, clinical pharmacologists, and internists for ADEs, ADRs, and MEs. They were then entered in a study database certified for clinical trials (secuTrial, interActive Systems GmbH, Berlin) (16). All acute events or clinical symptoms (including information from emergency physicians’ records, medical histories, ECGs, laboratory tests, etc.) and diagnoses for an individual patient were systematically examined for a possible causal relationship with each individual drug administered to him or her. The data recorded in the summary of product characteristics (SPC) were used as the basis for this (MMI Pharmindex Plus, Medizinische Medien Informations GmbH, Neu-Isenburg).

Causality was rated using the evaluation system of the WHO’s Uppsala Monitoring Centre. Only events rated as possible, probable/likely and certain were included in the evaluation (17). In a second evaluation, all recorded ADRs and MEs were re-evaluated by two independent experts (a clinical pharmacologist and an internist). When their evaluations differed from each other, all evaluators had to reach a consensus. To estimate the false negative rate, 75 of the cases recorded as being free of ADRs and MEs were selected at random and re-evaluated by a clinical pharmacologist and an internist. The false negative rate was 2.7% (95% confidence interval [CI]: 1.7 to 9.8%).

Potentially inappropriate medications in the elderly

All drugs were categorized as either PRISCUS or non-PRISCUS according to the published list of potentially inappropriate medications for the elderly (the PRISCUS list). When the study was conducted the PRISCUS list contained 83 drugs classified as PIMs on the basis of expert consensus (11). Dose-dependent and indication-specific aspects of the PRISCUS list were taken into account.

Definition of an adverse drug event

Adverse drug events (ADEs) were subdivided into adverse drug reactions (ADRs) and events caused by medication errors (ME+) in line with the cited definitions (6). MEs were taken to be clinically incorrect or inappropriate use of drugs, such as the following (6):

In line with the overwhelming majority of the literature, intentional overdoses, for example suicide attempts, were not included. In addition, off-label use that was clinically necessary and approved by specialist societies was not classified as an error. Medication errors that led to symptoms and/or had direct clinical significance, e.g. renal failure caused by a dosing error, were classified as ME+. The term “ADR” here is used in line with the WHO’s definition and describes harmful, unintentional drug reactions that occur at doses normally used in humans for prophylaxis, diagnosis, or treatment (7).

For discrete data, percentages and, where appropriate, 95% confidence intervals are given. For normally distributed continuous data, mean and standard deviation are stated. Significance was calculated using the chi-square test or Fisher’s exact test for discrete data, and the appropriate parametric and nonparametric tests for continuous data. The primary question was whether drugs on the PRISCUS list were associated with ADEs more frequently than other drugs. All other analyses must be formally considered to be exploratory. SPSS Version 20.0 (IBM, USA) and Prism 5 (GraphPad Software Inc., USA) were used for statistical evaluation.

The study population as a whole

Over the three-week study period, 752 patients admitted as emergency cases (50.0% of them women) were included in the study. ICD-10 primary diagnoses on admission are shown in Table 1. At least one medication prescription or administration was recorded for 702 patients (93.4%). At least one ADR was recorded for 149 (21.2%) of the 702 patients, giving a total of 185 ADRs (181 involving medication prescribed on an outpatient basis or self-medication), and a total of 277 MEs were observed in 166 patients (23.6%) (1 to 6 MEs per patient). The most frequent MEs were no indication or inappropriate indication (59.2%) and overlooked contraindication (23.5%). MEs led to clinically significant events (ME+) in 28.5% of cases.

These data show that the PIMs in the PRISCUS list are associated with an increased rate of adverse drug events. This means that avoiding PIMs could contribute to improved drug therapy safety. The possible contribution of PIMs to adverse drug events should be seen in relative terms, however, as PIMs accounted for only 3.3% of drugs taken before hospital admission among patients aged 65 years or older. Adverse drug reactions to PIMs accounted for only 6.1% of adverse drugs reactions, and ME+ involving PIMs accounted for only 17.6% of all ME+. Focusing on PIM lists can help identify high-risk drugs, but must not lead physicians in acute clinical care to underestimate the risks of other drugs. This observation is backed up by data from a US study conducted by Budnitz et al., which despite methodological differences show that most drug-related hospital admissions are caused by frequently used drugs that are not classified as PIMs, such as insulin, oral anticoagulants, etc. (1).

Data available to date on the clinical significance and predictive value of PIM administration in the elderly are fairly inconsistent (1–3, 18–21). This can be explained in part by the fact that many drugs on these PIM lists are classified as PIMs only for specific indications, presentation forms, or doses. Because large studies usually lack sufficiently detailed information, with only a few exceptions (22), this often leads to the corresponding drugs or cases being excluded from analysis, which in turn may lead to bias in results (1). It should also be borne in mind that, particularly in large studies, methodological limitations (e.g. prior definition of relevant ADEs) can lead to substantial bias regarding the type and frequency of observed ADEs (14).

The number of PRISCUS drugs as a percentage of the drugs taken by the patients aged 65 years or older who were included in the study was only 3.3% in total, whereas analyses of the Scientific Institute of AOK (a large German statutory health insurance provider) based on drug prescriptions subject to reimbursement according to statutory health insurance in 2009 found a somewhat higher percentage of PIMs: 5.6% of all prescriptions. It should be noted that the analysis presented here is more recent (so the PRISCUS list may already have affected prescription behavior) and that it also included nonreimbursable prescriptions and self-medication. In particular, the self-medication not included in the cited studies may lead to a different weighting of PIMs (24).

Overall, the current literature shows varying effects that have been achieved by consistently avoiding PIMs. A large US study in which more than 177 000 elderly patients admitted as emergency cases were examined for ADEs reported no increase in risk for PIMs on the Beers list, while smaller, usually methodically more precise studies have shown a significant effect on the risk of ADEs of PIMs (2, 25). More complex strategies, such as STOPP/START, may be superior to a PIM list alone in this respect (26).

Although Fürth Hospital is the only facility providing care for the emergency patients indicated above in a region with a population of more than 226 000 and well over 130 referring physicians, this study is formally single-center in design and may not be representative of the situation outside the region. Because this study phase lasted only three weeks, seasonal effects may have affected the prevalence of adverse drug events. These seasonal effects can only be quantified following final evaluation of all phases of the study. Although drug history and drug research were performed prospectively and sources were stated, for drug history in particular intentional or unknowing omission of some information cannot be ruled out.

The number of prescribed drugs increases with age, as does the percentage of patients suffering from ADRs. The prevalence of medication errors and the proportion of medication errors that lead to clinical manifestations also increase with age. For drugs on the PRISCUS list there is an increased risk of adverse drug events in elderly patients. However, only a small percentage of prescriptions for elderly patients are for drugs on the PRISCUS list, which means that most ADEs in elderly patients are caused by non-PRISCUS drugs. The data presented here show that adverse drug events occur mainly in the context of absent or inappropriate indications and/or overlooked contraindications.

Acknowledgement
We would like to thank board chairman Peter Krappmann and the business management committee of Fürth Hospital, led by Martin Vitzithum, for supporting the care research project and designing the technical infrastructure for study conduct.

This study was funded by the German Health Ministry as part of the German Coalition for Patient Safety (www.german-coalition-for-patient-safety.org/) (AZ II A5–2509 ATS 003).

MMI made its drug and drug interaction databases Pharmindex Plus (R) and OntoDrug (R) AMTS available to the Drug Safety Initiative free of charge.

Institute for Experimental and Clinical Pharmacology and Toxicology 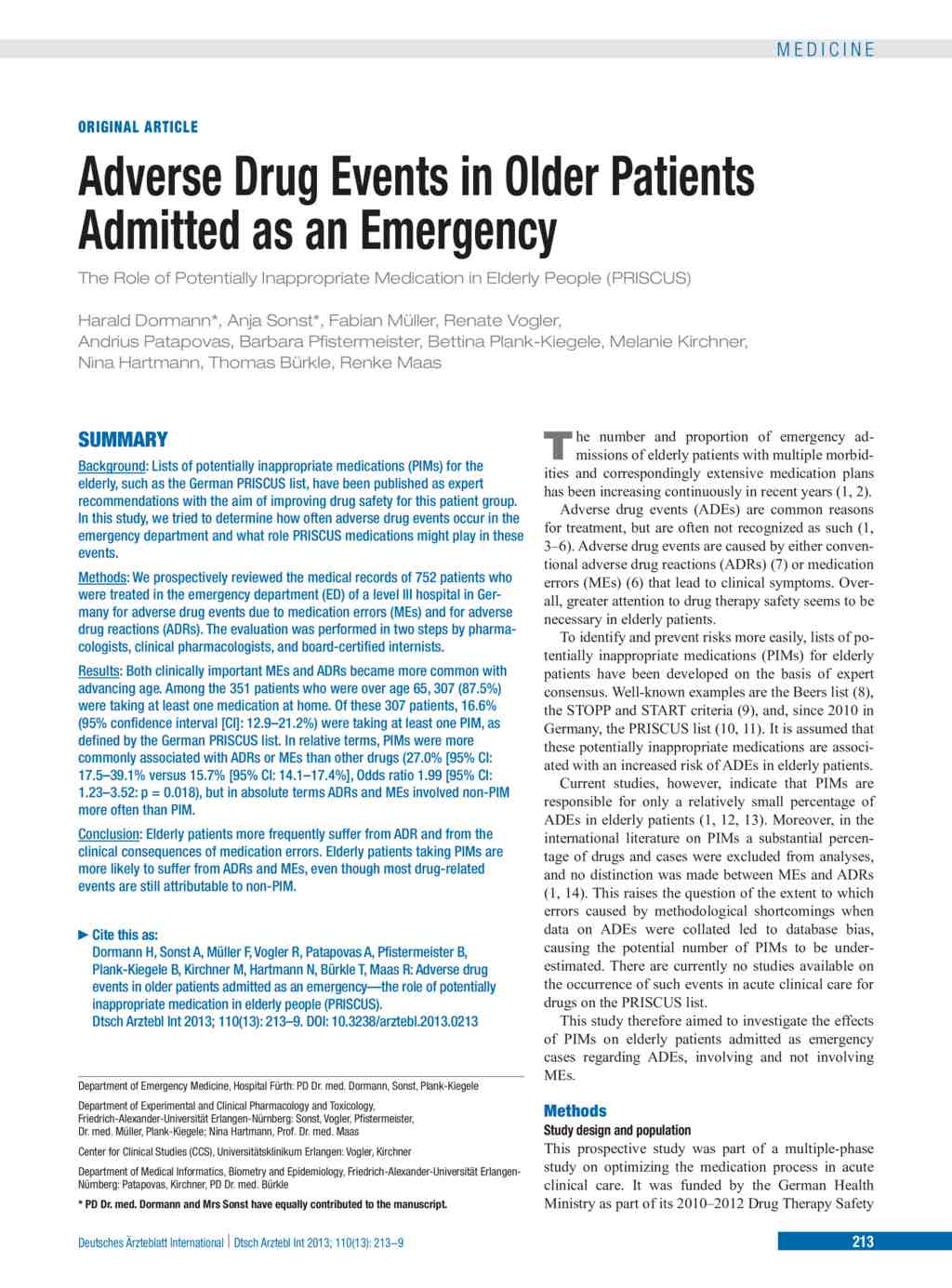