Results of a Population-Based Study in Berlin

Background: Preterm infants are at higher risk for developmental problems. The aim of this study is to quantify the relation between birth weight and special educational needs.

The increased risk for developmental abnormalities in very preterm infants, which at the latest becomes of daily importance when they start school, is well-documented in a number of cohort studies (1–5). These extend into adult life, especially in boys: male preterm babies with an extremely low birth weight of less than 1000g require on average an additional year of school before qualifying for a job or higher education, and their income as adults is 25% below controls with a normal birth weight (6). Even children who are born just a few weeks too early also are at increased risk of difficulties in school (7–12). Cohort studies across the entire spectrum of birth weights are time-consuming and do not contain sufficient numbers of infants with extremely low birth weights. Another problem is that socio-economic status correlates directly with both low birth weight (13, 14) and difficulties in school (15–18). Thus population-based cross-sectional studies are more suitable for analyzing the relationship between birth weight and need for special education.

The data from pre-school examinations (Einschulungsuntersuchungen) in Berlin capture an entire birth cohort at the age of five to six years. In this paper, the data from the years 2007 through 2011 are evaluated to quantify the relationship between special educational needs and low birth weight, to assess the impact of social factors and to calculate the population-attributable risk for special educational needs associated with low or very low birth weight.

The examinations required by the Berlin School Law (§55a) are carried out during the winter period before a child is scheduled to start school by the Child and Adolescent Health Services in the 12 districts of Berlin. The goal of the evaluation is to identify children who will benefit from special educational help as well as to initiate, if necessary, further diagnostic and therapeutic measures. The child’s level of development is determined with a standardized instrument (S-ENS) (19). On the basis of the test results, history, current evaluation and in some cases additional diagnostic measures, special education measures are recommended if a child shows deficits in one or more of six categories: vision, hearing, physical and motor development, language development, autism, mental development, learning, and social-emotional development.

The birth weight is obtained from the health records of the child or mother; in order to circumvent recall bias, undocumented statements by the parents are not considered.

The social history is acquired using a standardized parental questionnaire. Based on voluntary statements by both parents regarding education and job training, as well as employment status, a social status index is calculated and the child placed in one of three groups. In addition, the child is categorized as having an “immigration background” if one of these three conditions is met:

In addition, the German skills of the child and the accompanying parent (familial German skills) are assessed on the basis of vocabulary and grammar and placed into one of four categories (none/scattered words/fluent with numerous mistakes/good to very good). Finally, the family status (does the child live with both parents, regardless of their marital status), number of months of nursery school/kindergarten, and whether a child has his or her own television set are ascertained. Detailed information regarding the pre-school examinations can be found in the annual report of the Berlin Senate Department for Health and Social Services (Senatsverwaltung für Gesundheit and Soziales) (20).

The pre-school examination data are collected locally, aggregated and forwarded yearly to the Senate Department for Health and Social Services. The analysis in this paper is based on the pooled data from 134 313 children evaluated between 2007 and 2011.

In addition, the number of children born in Berlin between 2002 and 2006 who died during the first year of life, stratified by year of birth and birth weight, was provided by the Statistical Office for Berlin-Brandenburg (Amt für Statistik Berlin-Brandenburg).

The study was approved by the ethics commission of the Charité, Berlin (#EA2/132/13).

The groups of children with and without special educational needs were compared on the basis of birth weight as well as other personal and familial features using the chi-square test. The effect of these variables was estimated with univariate logistic regression analysis using special educational needs as a dependent variable. Since the birth weight showed a non-linear relationship to the dependent variable, it was considered a categorical variable in the regression analysis. Ten weight groups were formed from under 750 g to over 3000 g—in segments of 250 g—and compared to the two larger groups of 3000 to 4500 g and over 4500 g. Since the immigration background and German language skills of the child and parents showed multicollinearity, they were combined. The length of time in nursery school/kindergarten was entered as a categorical variable—either „longer than two years“ or „two years or less“.

The influence of birth weight (divided into 12 groups) on special educational needs was determined and controlled for other relevant variables using multiple logistic regression analysis. In addition, the district of residence was controlled for, as there are differences in the percentage of children with special educational needs between the 12 Berlin districts that are not completely explained by differences in the social structure. The variables district, sex, social status and the combined marker immigration background with German language skill were a block entry. Step-wise forward entry was employed for living with a single parent, duration of nursery school/kindergarten and own television set, using the Wald test as a selection criterion.

The goodness of fit of the regression model was measured with the Hosmer–Lemeshow test; Nagelkerke R2 was used as a measure of variance explanation.

The level of significance was set at p<0.001 and the relationship between independent and dependent variables was determined as an odds ratio (OR) with a 99% confidence interval (CI). All statistical analyses were performed with SPSS (IBM), version 19.0.

Table 1
Characteristics of children with or without special educational needs, as assessed by the pre-school examinations (Einschulungsuntersuchungen) in Berlin 2007–2011
Enlarge All figures

In univariate logistic regression analyses, the influence of different variables on the rate of special educational needs was estimated. Because of the large number of cases where individual data was missing (21.5%) the analyses were carried out both with pairwise and listwise deletion of missing values. Similar odds ratios, however, were obtained by either method (eTable).

The multivariate regression analysis included in addition to birth weight (in 12 groups) and district, all the variables which had shown in the univariate analysis a significant association with special educational needs (Table 2). Except for the variable “own television set”, all the others remained significantly associated with special educational needs in the multivariate analysis. Thus, the variable “own television set” was dropped in the optimized model, accounting for 11.6% of the total variance.

There are some limitations to our analysis, mainly because it is based on routinely collected data. Since we had no information on gestational age, we cannot distinguish between preterm birth and small for gestational age infants. We had no information on the severity of the disability necessitating special education. The evaluating physicians were not blinded with regard to birth weight or other data. The information on the family structure, social status and language skills are confined to the time of examination—in the formative years before there could have been a completely different picture. The demographic features of a large city with a high percentage of immigrants and many families in precarious social situations makes a comparison with more rural areas difficult.

The study has a number of strengths which counterbalance the limitations. All children were studied with the same tools in a standardized fashion before starting school. Since the examination is legally required, all children were studied, eliminating the selection bias typical of cohort studies. In addition, the study addressed all birth weights and thus made it possible to study children with only marginally decreased or elevated birth weights.

The results support the known risk factors of male sex and lower social status (21, 22), while more than two years in nursery school/kindergarten was associated with a reduced risk. A study from the USA showed that quality of child care has a positive effect on the cognitive and language skills before starting school (23). This positive effect increases as the social situation of the child becomes more difficult (24), but the influence of the parents is greater than that of the child care center (25). Attending nursery school/kindergarten can reduce the amount of time a child spends watching television, a factor that shows a negative association with school performance (26, 27).

In our study, the influence of television was only seen in the univariate analysis. The effects of attending nursery school/kindergarten, immigration background, German skills and single-parent household (28, 29) were all less significant in the multivariate analysis, presumably because all vary in close alignment with the social status.

In addition, the data show that an immigration background per se does not influence the rate of special educational needs; instead it only plays a role when coupled with poor German skills in the family. Limited languages skills make it difficult for families to take advantage of health screening and other support for children (30).

The Federal Joint Committee (Gemeinsamer Bundes­aus­schuss) mandates a standardized developmental-neurological evaluation at two years of age for all children with a birth weight under 1500 g. However, the prognostic validity of an evaluation of such young children is limited (31, 32). Except for severe neurological problems, the disabilities that play a role in learning, social integration and later work experience can first be identified in the later pre-school age (33).

This underscores the importance of evaluating all pre-school children. If it ever becomes possible to overcome data protection rules and combine perinatal and neonatal information with the already available information, this would provide additional important information about the risk factors for special educational needs.

The authors thank their colleagues in the Child and Adolescent Health Services in Berlin for the close collaboration over many years in collecting, validating, and further refining the pre-school examination data.

Translated from the original German by Walter Burgdorf, MD 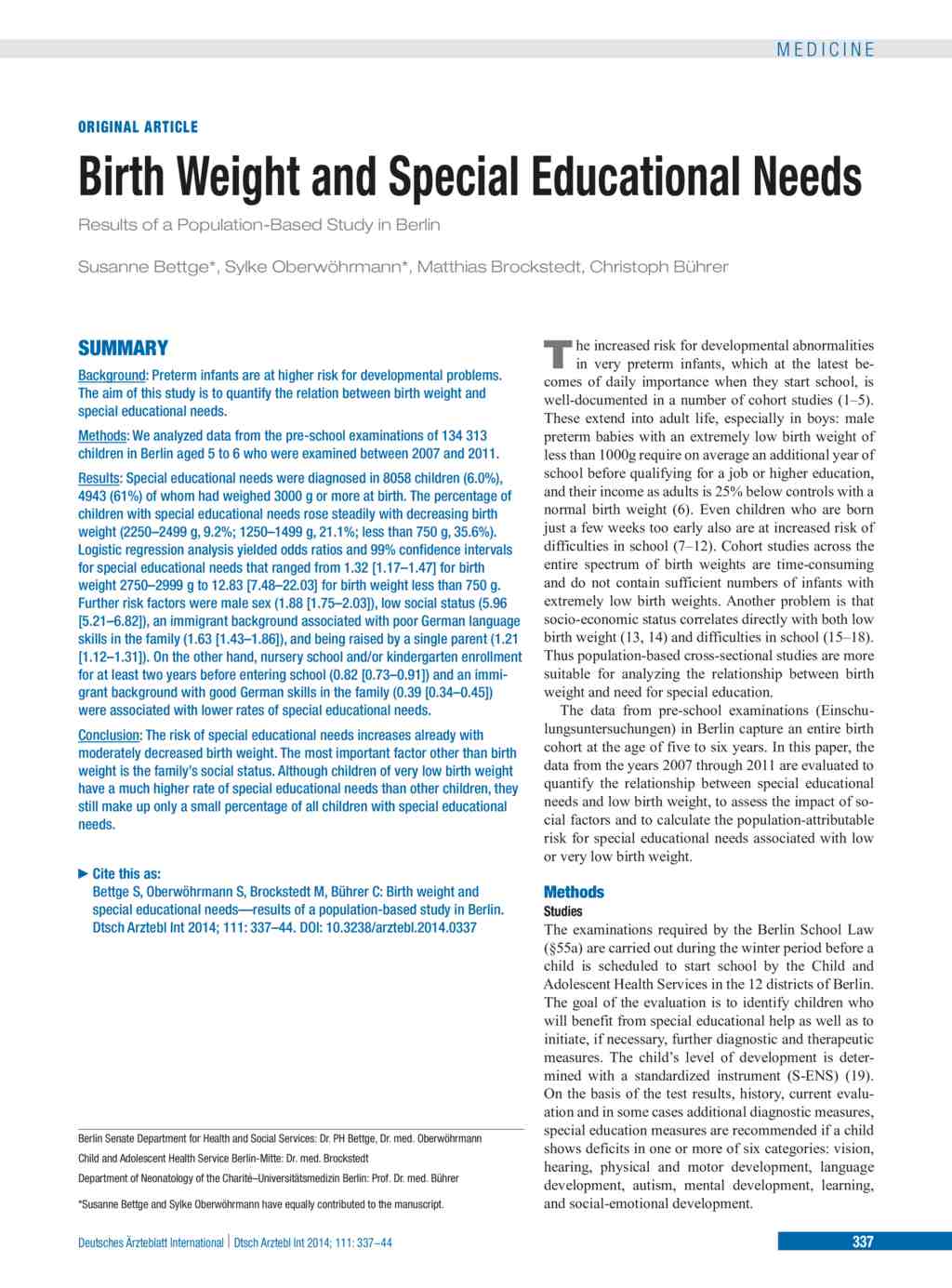