Triggers and Treatment of Anaphylaxis

An Analysis of 4000 Cases From Germany, Austria and Switzerland

Background: Anaphylaxis is the most severe manifestation of a mast cell–dependent immediate reaction and may be fatal. According to data from the Berlin region, its incidence is 2–3 cases per 100 000 persons per year.

Methods: We evaluated data from the anaphylaxis registry of the German-speaking countries for 2006–2013 and data from the protocols of the ADAC air rescue service for 2010–2011 to study the triggers, clinical manifestations, and treatment of anaphylaxis.

Conclusion: Wasp and bee venom, legumes, animal proteins, and analgesic drugs were the commonest triggers of anaphylaxis. Their relative frequency was age-dependent. Epinephrine was given too rarely, as it is recommended in the guidelines for all cases of grade 2 and above.

Anaphylaxis is defined as an acute systemic reaction with the symptoms of an immediate allergic reaction that can affect the entire organism and is potentially life-threatening (1–3). Anaphylaxis can be fatal or lead to permanent damage (3). Pathophysiologically, anaphylactic reactions—especially those triggered by foods or insect venom—are predominantly IgE-mediated, but in rare cases direct activation of the mast cells can be the cause.

At present no uniform worldwide definition of anaphylaxis exists. A mechanistic approach uses the term “anaphylaxis” for systemic generalized reactions of all degrees of severity (4). The definition most often used today describes anaphylaxis as a severe generalized reaction with symptoms in various organ systems (skin and mucosa, respiratory tract, cardiovascular system, gastrointestinal tract) (5). The differential diagnosis of anaphylaxis includes a large number of possible conditions (Box).

Although data exist worldwide on the epidemiology of anaphylaxis, the triggers and their prevalences vary from region to region and depending on the patient group(s) studied (6, 7). One central problem is that the ICD-10 coding system does not make provision for coding the various forms of anaphylactic reaction or for anaphylactic shock with a single code, so studies working on the basis of ICD-10 diagnoses have to take account of several code numbers in order to collect data on anaphylaxis in an appropriate way.

A recently published study by our working group in collaboration with Berlin emergency physicians showed an anaphylaxis incidence of 2 to 3 people per 100 000 population (10). Although the data vary according to where they were collected, who the target group was, and the selection criteria for the group, nevertheless, overall they show that anaphylaxis, the most severe manifestation of an allergic reaction, is a rare event.

Studies from the USA and Australia suggest that the number of patients experiencing anaphylaxis has increased during the past few decades (8, 11). This relates most of all to severe allergic reactions triggered by food or drugs (8).

According to the current guidelines for the acute treatment of anaphylaxis, the first-line treatment for patients with severe allergic reactions who show respiratory and/or cardiovascular symptoms is intramuscular adminstration of epinephrine (12)—although the evidence for this is poor because of a lack of controlled studies (13).

Measures such as appropriate positioning of the patient and the giving of fluids and oxygen are further basics of treatment. Additional drugs that should be given in the acute situation are H1-receptor–blocking antihistamines and corticosteroids, although here too controlled studies on the effectiveness of these drugs in treating anaphylaxis are lacking (9). In patients with symptoms of asthma, additional treatment with inhalational β2-sympathomimetics is recommended. A summary of currently recommended therapeutic measures for anaphylaxis is given in Table 1.

Aim of the study

The aim of the present study was to identify the triggers of anaphylaxis from data in the anaphylaxis registry of the German speaking countries, and to present them and their relative frequencies in relation to patient age. To gain a picture of the care situation for anaphylaxis patients in the German-speaking countries, data from the anaphylaxis registry relating to care are presented in comparison with primary data obtained from emergency physicians (from the Berlin area as a sample, and from the ADAC air rescue service for the whole of Germany).

The study was carried out as a retrospective evaluation of data from the anaphylaxis registry (this records data about patients with severe allergic symptoms; that is, skin or mucosal symptoms and respiratory and/or cardiovascular symptoms in relation to triggers, symptoms, diagnostic procedures, concomitant diseases, and care) from 2006 to 2013, and from the documented callouts of the ADAC air rescue service from 2010 to 2011.

The data from the survey of Berlin area emergency physicians have been published previously; in the present analysis they are reused only for purposes of comparison for the 2010 to 2011 time period (10). A detailed description of the methods and statistical evaluation is provided in eBox 1.

The results presented here include all cases reported to the registry from 1 January 2006 to 31 March 2013. A total of 4141 cases from Germany, Austria, and Switzerland were included (inclusion criteria: adequate severity of reaction no more than 12 months in the past). Of these, 2173 patients were female and 1968 were male. In the overall group, 3168 were adults (1840 female, 1328 male) and 973 were children (333 female and 640 male). Classification of the patients on the basis of their reported symptoms into Ring and Messmer severity grades (4) (Table 2) shows that in accordance with the inclusion criteria >85% of the reactions were equivalent to severity grade II or III. Grade IV reactions were rarely reported (n = 107): among adults, the percentage was 3.1% and among children it was 0.9% of cases (Figure 1).

With the aid of the anaphylaxis registry, we have for the first time succeeded in collecting clinical epidemiological data on patients with anaphylaxis in the German-speaking countries using a standardized form of data collection. Data on the triggers of anaphylaxis show that their relative frequency depends on patient age. The leading triggers are foods, insect venoms, and medical drugs. Comparable data are available from other studies in Europe, e.g., France and Spain (15, 16).

In the literature, milk and hen's egg are described as frequent triggers of anaphylaxis in young children (14), while in school-age children peanuts and tree nuts (hazel nut, walnut, cashew, Brazil nut, macadamia) frequently occur as triggers of a food allergy, not just in Europe, but also in the US (17). This also agrees with the results of the present study, in which these food allergens were predominantly reported as triggers of severe allergic reactions in children.

Food allergens as triggers of anaphylaxis are also determined by the eating habits of a given population; for example, shellfish are frequent triggers of anaphylactic reactions in Asia (18). Among adults in the German-speaking countries, the predominant trigger of anaphylaxis is insect venom. Here, the necessity of an appropriate allergological diagnostic work-up and initiation of therapy must be particularly emphasized, as specific immune therapy offers a possible causal treatment to build up strong protection against the case of another sting (19).

The data on medical drugs as triggers show high numbers of reactions, especially for painkillers and antibiotics. It should be taken into account that these drugs are in very widespread use. To what extent additional factors such as the presence of an active infection are significant for the triggering of an anaphylactic reaction needs to be investigated in future studies.

Even if foods or drugs triggered the anaphylaxis, according to the guidelines for the management of anaphylaxis, further allergological diagnostic tests should be carried out in all patients—including skin (preferably prick test), blood (specific serum IgE) and provocation tests (as appropriate)—to enable appropriate counseling (12). As up to a third of patients can have repeated severe allergic reactions (20), in addition to an allergy card recording the time, trigger, and symptoms of the reaction that has occurred, patients should be issued with an emergency kit consisting of an epinephrine autoinjector, an antihistamine, and corticosteroids, together with sufficient training in how to use them in an emergency situation (12).

Data on the emergency care of patients with severe allergic reactions show a discrepancy between the treatment recommendations given in current guidelines (epinephrine administration is recommended as a first line treatment from grade II upward) and the drugs actually given to patients (12, 21). This discrepancy is particularly obvious when the data are analyzed independently of severity grade.

In the overall group of patients, 12.3% from the anaphylaxis registry, 8.6% of those in the air rescue data, and 21.6% of those in the Berlin emergency physician records were given epinephrine. Among those with grade IV severity, however, the rate of epinephrine administration rises to 43.9% (anaphylaxis registry), 78% (air rescue service) and 100% (Berlin emergency physicians). Until now, seven deaths have been recorded in the anaphylaxis registry (six in Germany and one in Austria; the triggers were food in three cases, wasp venom in three cases, and in one case a medical drug). The statistics show a high survival rate; however, it needs to be kept in mind that the data reported to the anaphylaxis registry is generally obtained from patients who actively attend an allergy center for diagnosis and treatment.

The evidence that epinephrine administration has a positive influence on the survival of anaphylaxis patients is derived from earlier studies (13, 22, 23). On the basis of these study results, epinephrine is recommended as the drug of choice in the guidelines for the acute treatment of severe allergic reactions (12), even though there are no prospective controlled studies of the efficacy and tolerability of epinephrine in the treatment of anaphylaxis. It has been shown that patients who had received two doses of epinephrine before they reached the emergency room were less often hospitalized than patients who received the second or both doses in the emergency room. However, the case numbers in these cohorts were small (n = 58). Likewise, it was observed that persons who died as a result of an anaphylactic reaction had either received no or delayed epinephrine (23).

Epinephrine was given by the Berlin emergency physicians more often than by the air rescue emergency physicians; in stage IV patients the Berlin physicians gave it in 100% of cases. A significant factor here might be that the project was presented to the Berlin emergency physicians before the data collection started, in a format similar to a training course, and therefore positive effects may have occurred in terms of the recognition of an anaphylactic reaction and the consequent use of epinephrine. Future activities will aim to train physicians and patients in the emergency care of anaphylaxis in a standardized way. Physicians in other medical specialties, such as general practitioners, radiologists, and oncologists, and other medical personnel (paramedics) likely to see patients experiencing anaphylaxis, should also be trained.

A limitation of the present data is that the anaphylaxis registry contains only data submitted by allergy centers and/or allergology private practices. Since not all patients attend for specialist treatment after suffering a severe allergic reaction, this is a source of bias. For example, a different distribution of triggers was found in the primary data collection from emergency physicians (the most frequent possible triggers in the dataset from the emergency physicians was food, for both children and adults) (10).

Another analysis carried out among physicians in private practice has shown that the relative frequencies of triggers are to a significant extent determined by the specialty of the reporting physician (for example, chemotherapeutic drugs in reports from oncologists) (26).

We hope that the data in the anaphylaxis registry, together with collaboration between the various medical societies and other specialist medical associations, and the establishment of standardized patient training, will enable the situation regarding the care of anaphylaxis patients with severe allergic reactions in Germany to be improved. This is necessary not least because what it is about is the most severe—potentially fatal—manifestation of a mast-cell-dependent reaction.

The authors are grateful to all participating centers for their active collaboration (see eBox 2 and www.anaphylaxie.net/index.php?id=968). This work was supported in part by an award from the Kanert-Stiftung and by NORA e.V. (Network for Online Registration of Anaphylaxis).

Kirsten Beyer has received consultancy and lecture fees and reimbursement of conference fees and travel expenses from ALK-Abello and Meda Pharma.

Alice Koehli has received consultancy (advisory board) fees and reimbursement of conference fees and travel expenses from ALK-Abello. She has received lecture fees from Meda Pharma.

Ernst Rietschel has received consultancy (advisory board) and lecture fees from Meda Pharma.

Translated from the original German by Kersti Wagstaff, MA 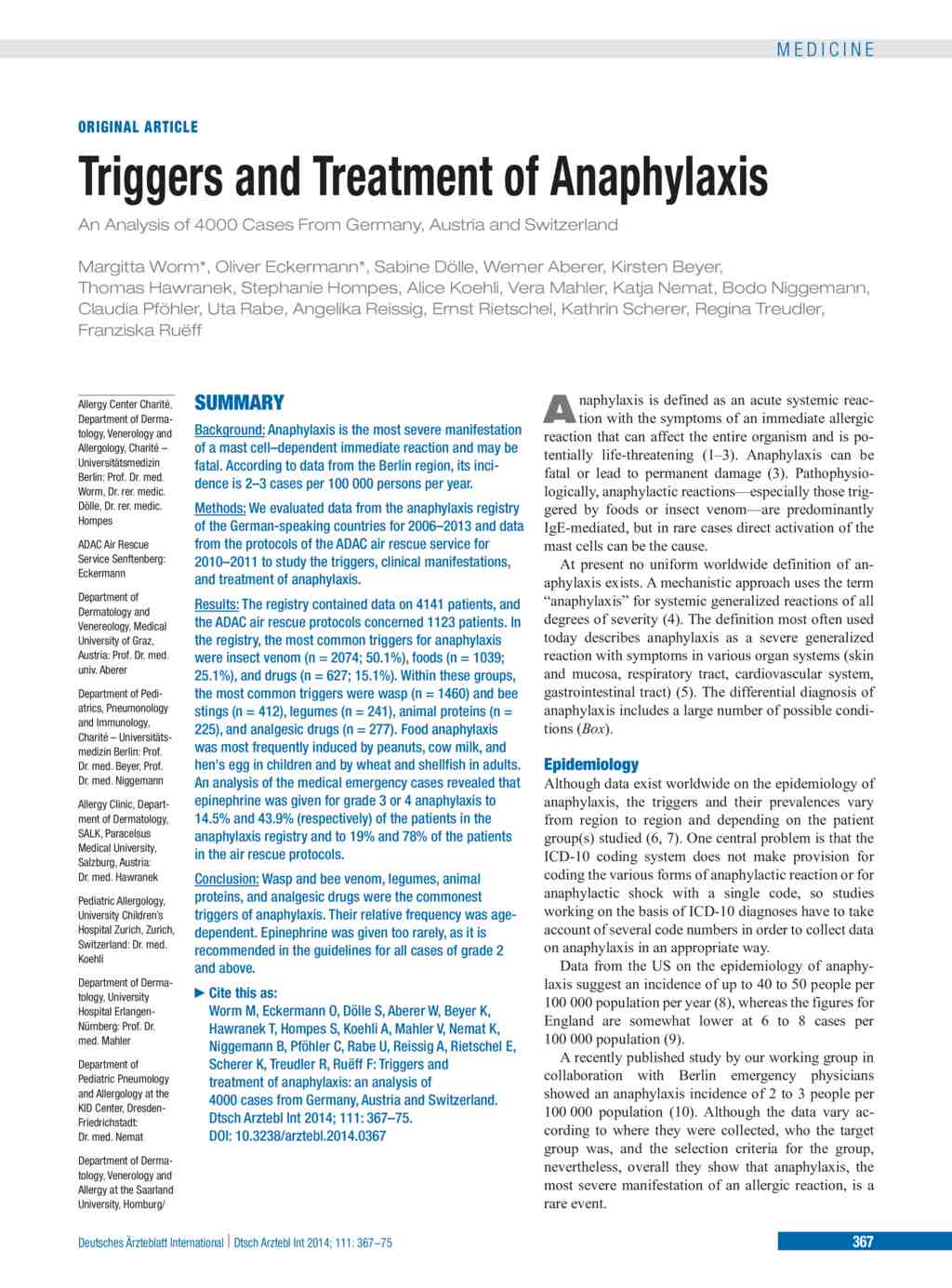