The Disease Burden on Our Shoulders

Dtsch Arztebl Int 2014; 111: 627-8. DOI: 10.3238/arztebl.2014.0627
Editorial to accompany the article: „Trends in Disease Burden in Germany—Results, Implications and Limitations of the Global Burden of Disease Study“ by Dietrich Plass et al. in this issue of Deutsches Ärzteblatt International

You, the readers of these words, will on average live longer than your parents. But how many of you have devoted much thought to how healthy or ill you will be during those extra years of life? It is not in the nature of most of us to spend much time pondering questions of an existential nature, especially if they concern the distant future. Physicians, however, should take an interest in the medical implications of an extended life span for the population as a whole.

The surveillance of disease burden takes on special importance in times of increasing life expectancy and changing age distribution of the population, and is the subject of the study by Dietrich Plass and his coauthors in this issue of Deutsches Ärzteblatt International (1). The term “disease burden” is used here to mean the frequency, average age at onset, severity, and mortality of diseases with all their individual, social, and societal consequences. The disease burden of a whole population is therefore always considerable and is affected by demographic changes. It involves not only increasing or decreasing occurrence of single diseases but also significant shifts in the disease spectrum of a population, with implications for, to name just one example, the numbers of specialists needed in particular fields of medicine.

Among the various prognoses of exactly how the burden of disease is likely to be affected by demographic trends, two scenarios are receiving particular attention. In the case of “disease extension,” the frequency and age at onset of the major widespread diseases would remain unaltered: increasing life expectancy would mean more years lived with disease.

In the case of “disease compression,” however, preventive measures would successfully delay the onset of especially the most common diseases—such as diabetes, myocardial infarction, stroke, and various cancers—so that for most people illness would continue to be concentrated in a short period at the end of their life.

These two scenarios are the topic of a lively discussion, dominated by the implications for (health) economics, pointing to the high costs of potential disease extension. Interestingly, there are hardly any data for Germany that can be used to support the arguments for extension or compression. This may well be why the debate is so heated.

For physicians involved in routine patient care, terms such as disability-adjusted life years (DALYs) and years of life lost due to premature death (YLLs) are difficult to digest. These measures are the result of complex calculations and have nothing to do with their daily clinical experience. This may be a major reason why these parameters and the underlying concept have met with little interest in Germany and have thus only rarely been used.

The article by Plass et al. (1) reports one of the few studies describing the trends in disease burden in Germany. The authors found that between 1990 and 2010 the rise in years of healthy life (health-adjusted life expectancy, HALE) was much lower than that in overall life expectancy. Thus neither of the two scenarios mentioned above, disease extension and disease compression, was completely correct. Rather, the price for part of the extra life span compared to previous generations was reduced health. The study does not show, however, whether this price tended to increase or decrease over the 20-year observation period. It would be important to see whether the increase in HALE was different in the two decades of the study.

The Global Burden of Disease (GBD) Study has its own distinctive methods, which have to be taken into account when interpreting findings on mortality and risk factors. A strong point of the GBD methodology is that it was specifically designed to render the health/disease situation in widely differing countries comparable. Matching the results for Germany against other European nations, we find that this country occupies an intermediate position. This too fuels the debate on the strength of the link between the costs of a country’s healthcare system and the health of its population.

The need to use uniform methods in order to maximize comparability reaches its limits when it comes to the amount of information on disease prevalence available from each individual country (2). The GBD Study employs a number of assumptions and algorithms to estimate missing prevalence data (2). Moreover, not all sources of data in a given country are necessarily identified or used. It would be desirable for the future, and for the next report, to harmonize methods and instrumentaria so that regional and national health reporting in Germany can play an enhanced role in international comparisons of disease burden. 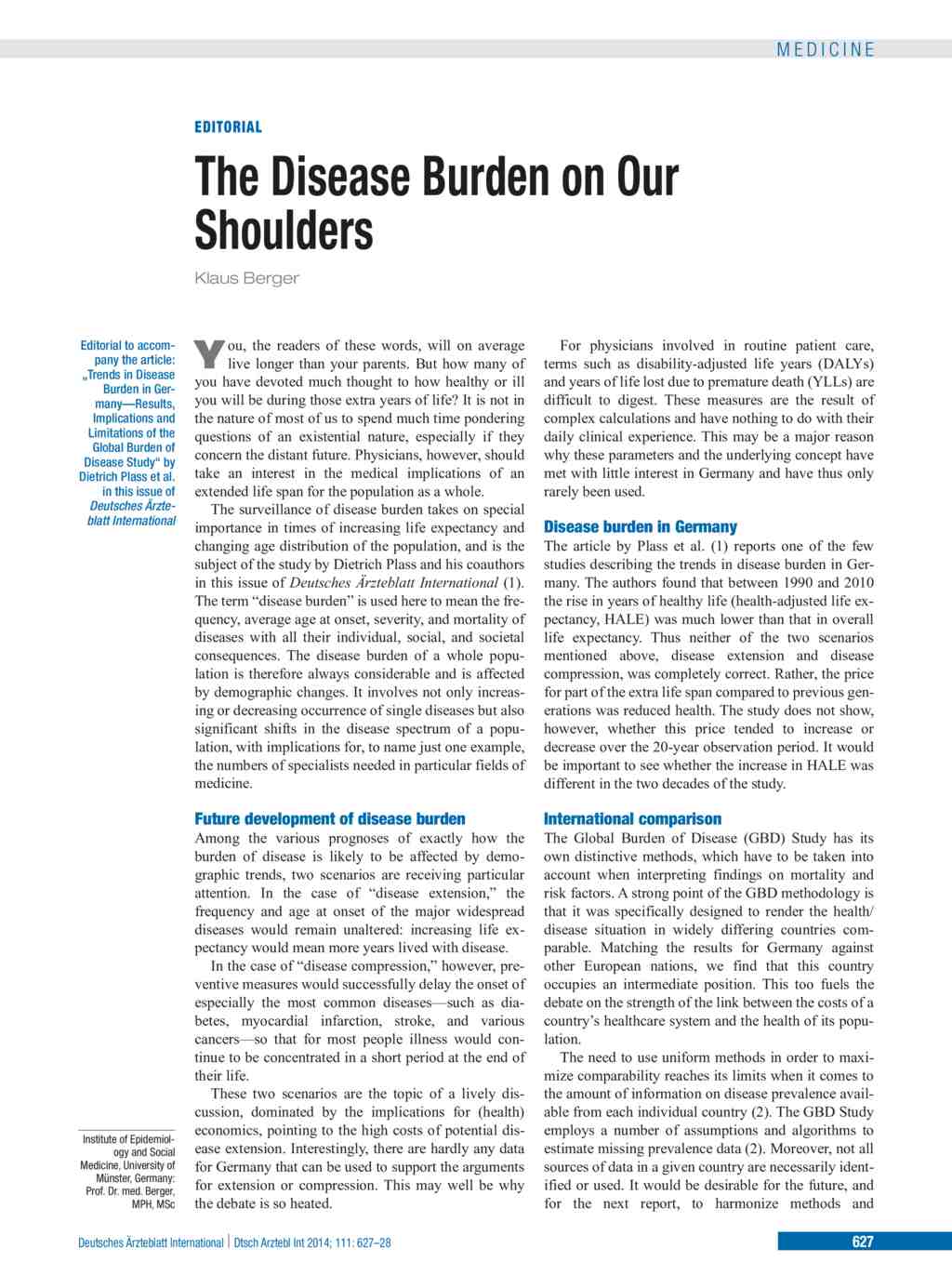