Background: Pruritus is a rare but troublesome symptom in palliative-care patients with a variety of underlying diseases. The pharmacotherapy of pruritus is often off-label, and an evidence-based evaluation is needed.

Method: A Cochrane Review published in 2013 was updated with a systematic literature search up to January 2014. Randomized and controlled trials (RCTs) with adult palliative-care patients were included.

Conclusion: In view of the diverse etiologies of pruritus in palliative-care patients, careful consideration should be given to the choice of drug used to treat it. The substances listed here have moderate to strong antipruritic effects and merit further study in RCTs of high methodological quality.

Pruritus is defined as an unpleasant sensation that triggers the need for a mechanical response, such as scratching, rubbing, or pressure (1). Pruritus is not a disease entity but—similar to pain—a symptom that is only captured by means of the individual patient’s subjective perception (2–4) with biopsychosocial triggers and amplifiers, which is based on complex pathomechanisms that have not been conclusively researched (5–7). In palliative care patients, pruritus is a distinctive feature, owing to its multifactorial nature. Typically it occurs as an accompanying symptom in several underlying disorders (8–9),

In this context, the prevalence of pruritus varies between 1% after administration of opioids (11) and 25–85% in patients with renal failure (10).

As no gold standard exists for the treatment of pruritus in patients with advanced life-threatening disorders, this systematic review aims to explain and assess the effectiveness of pharmacological interventions. We intentionally did not include pruritus as the symptom of a primary skin disorder.

On the basis of the search strategy of a Cochrane review published in 2013 (12), we conducted an electronic database search for the time period from January 2012 to January 2014. We exclusively included and evaluated randomized controlled (which implies comparisons of medications) trials (RCTs) of pharmacological interventions in which pruritus was the primary end point. Patients aged 18 or older who had pruritus in combination with an incurable advanced malignant or non-malignant disorder were considered to be palliative care patients (12). Further methodological information can be found in Xander et al. (12).

In order to identify relevant studies we searched the databases MEDLINE via Ovid, the Cochrane Library via Wiley, EMBASE via DIMDI, BIOSIS via Web of Science, CINAHL via EBSCO, and PsycINFO via EBSCO (15 January 2014). Two of the authors (Xander, Siemens) reviewed the studies’ titles and abstracts independently from each other. The selected studies were extracted according to a predefined form (Siemens). The extraction table and the full text were collated by one of the two authors (Xander), and inconsistencies were resolved by a third author (Becker).

Furthermore, clinically relevant substances from the Cochrane review (12) were selected and described and evaluated in this review article. Wherever possible, we calculated the mean difference and Cohen’s d between the placebo and intervention groups when these were not reported in the study (13, 14).

In addition to the 40 identified studies in the Cochrane review by Xander et al. (12), our updated search identified three additional studies that were included (Figure, Table 1). The eTable summarizes the results of eight effective and clinically relevant substances from 19 RCTs (see [12] and updated search). Because of our study’s limited scope, only clinically relevant substances were included. The Cochrane review by Xander et al. (12) provides a complete overview.

Ondansetron and colesevelam tend to be ineffective against pruritus. According to the results of one RCT each per substance—with small case numbers (8–29 patients per group)—the following substances are potentially effective: activated charcoal (oral), colestyramine, sertraline, doxepin, thalidomide, montelukast, erythropoietin, propofol, lidocaine, tacrolimus, and pramoxine hydrochloride (12).

In a study with one week’s treatment duration, palliative care patients (n=26) with pruritus of diverse origin were investigated. In this setting, paroxetine (a serotonin reuptake inhibitor, SSRI) reduced pruritus in patients with primarily malignant underlying disorders (21/26 of participants) by up to 1.35 points on the numerical analogue scale (NAS, 0–10, 95% confidence interval [95% CI] 0.61 to 2.08; p=0.001; days [d]=3.3) within the final three days of treatment (15).

In patients with uremic pruritus, administration of the anticonvulsant gabapentin resulted in a notable reduction in pruritus in two RCTs compared with placebo, of 5.2 cm and 6.4 cm on the visual analogue scale (VAS: 0–10 cm) (16, 17).

For patients with HIV induced pruritus, a four-arm study (hydroxyzine hydrochloride [HCl] versus pentoxifylline versus indometacin versus triamcinolone) showed a median moderate pruritus reduction as a result of the non-steroidal antirheumatic drug indometacin (median 3; scale 0–4; n=10) (31).

Table 2 evaluates the 19 studies from the eTable with the studies from our updated search (Table 1) in accordance with the criteria of Cohen (13) and Strand et al. (34) by using combinable symbols (0/+/++). The use of the evaluation symbols is an intentional simplification that reduces information in favor of an overview. In conclusion, the eFigure shows the risk of bias of the included studies, according to the standards of the Cochrane Collaboration.

The present systematic review includes almost eight clinically active substances (19 RCTs) and a total of 614 patients (eTable). Furthermore, the study includes the description of three studies from our updated search (Table 1) as well as an assessment of the presented studies with regard to the effectiveness of the substances (Table 2) and the risk of bias (eFigure).

Although all included studies were RCTs, they had substantial methodological differences. The calculation of effect sizes (for example, Cohen’s d, Hedges’s g) was not found in any of the studies (35). In interpreting the studies, it needs to be borne in mind that case numbers, duration of the intervention, and dosages vary.

Furthermore it should be pointed out that severe pruritus is tendentially associated with greater effects of substances (16, 17, 20, 24). In order to be able to attribute differences between groups in clinical studies to the intervention, identical baseline values of the study groups are required, among other things. Different (25, 29) or mean (16, 17, 22, 26) baseline values of the intervention and control groups may result in a slight overestimate of the results of some studies. The lacking baseline measurements (19, 27, 31) and measures of dispersion (27, 31) are not conclusive either.

For the substance nalfurafine, the reported results were consistent, albeit with small, and in some cases non-significant, differences in the mean values between the placebo and intervention groups (7.29–12.3 mm; VAS: 0–100 mm) (18, 19). In view of only 3 dropouts per dosage group, and in view of the large study reported by Kumagai et al. (>110 participants per group), the safety of nalfurafine can be assessed as high.

For the proof of efficacy, however, the authors reported only the changes in the VAS without explicitly naming baseline values. On considering the baseline measurements of the gabapentin studies (16, 17) the striking fact is that patients had higher entry values on the VAS (0–10 cm) than in the two studies reported by Wikström et al. (18), which somewhat relativizes the larger effect of gabapentin (5.2–6.4 cm; VAS: 0–10 cm). On the other hand, it should be noted that with the exception of Wikström et al. (18), the study duration of two weeks was not exceeded in the other nalfurafine studies and therefore a comparison with the four-week treatment duration in the gabapentin studies is possible to a limited degree only (eFigure). The effectiveness of naltrexone cannot be assessed conclusively. Although, compared with the placebo group, a notable difference was seen in severe pruritus (>9 VAS; VAS: 0–10 cm), of ≥5 cm (p<0.05) (20), this was not confirmed in two further studies (21, 22), in spite of identical medication and a longer treatment period—presumably because of the lower pruritus level at baseline. Furthermore, the naltrexone studies had many dropouts because of adverse effects (30.4–46.2%), with the exception of the study by Peer et al. (20).

Although cromoglicate was effective in both studies we identified (23, 24), the true effect is difficult to estimate because of small case numbers and differences between the studies (pruritus baseline level, duration of treatment, form of application; 34% therapy dropouts in Vessal et al.). Neither of the two studies had any dropouts because of adverse effects; consequently, systemically and topically applied cromoglicate can probably be regarded as safe.

Within the rifampicin studies, the comparability is limited because of the difference in measuring instrument. Podesta et al. present a result that could be questioned, according to which 11 out of 14 patients (79%) experience complete resolution of their pruritus (pruritus baseline level: 72 mm; SD: 19 mm; VAS: 0–100 mm) (26). On a sensible scale such as the VAS (0–100 mm) this finding does not seem plausible after only a one-week treatment course of rifampicin. A qualified proof of efficacy is given by the study reported by Ghent et al., in which corresponding days of two weeks’ treatment are compared. The fact that only days 4, 5, and 10 show significant differences compared with placebo (24 mm; 36.5 mm; 32 mm, 38 mm; VAS: 0–100 mm) implies wide dispersion (not reported) of the data and the possibility of results that reach significance by sheer chance (27). Bachs et al. point out that in one case, rifampicin led to hemolytic anemia and renal failure. The small case numbers make precise conclusions regarding the safety of rifampicin impossible (25).

For flumecinol, efficacy was seen only for a dosage of 300 mg twice daily, but not for 600 mg/week (28). Since no adverse effects or dropouts were reported, one may cautiously assume relative safety for flumecinol, in spite of the small case numbers. The limited effectiveness was partly explained by the low pruritus levels (median ≤50 mm; VAS: 0–100 mm) at baseline.

For naltrexone, two studies (29, 30) with small case numbers (n=8; n=20) exist, which show its efficacy, albeit with some limitations: the effect of naltrexone compared with placebo shows additional increases in the study by Wolfhagen et al. because the pruritus in the placebo group had increased for reasons unknown (29). Furthermore, the mean baseline level of the naltrexone group is notably higher than that of the placebo group (daytime: 65 mm v 48 mm; nighttime: 59 mm v 47 mm). Although there were only two dropouts in the study reported by Terg et al. (30), 52 adverse effects were described—which affected 20 subjects (2.6 per subject). In the Wolfhagen et al. study there were no dropouts, but 23 adverse effects in 8 subjects (2.9 per subject).

In three of the five cited naltrexone studies, vertigo was documented in 19–50% of patients. This needs to be borne in mind in clinical practice, as vertigo is a risk factor for falls (36) and represents a widespread problem in patients with advanced cancers, for example (37). The use of naltrexone in palliative care patients is risky because of a possible loss of analgesia. The opioid antagonist methylnaltrexone could be an alternative, which does not pass the blood-brain barriers (unlike naltrexone) and therefore does not impair the centrally mediated analgesic effect of opioids (38).

A significant difference between the tested substances existed in the study by Smith et al. only between the indometacin group (median: 3) and the triamcinolone group (median: 1). As each group included only 10 patients, it is difficult to draw any firm conclusions about the effect. Furthermore, the fact that indigestion was reported in four cases and abdominal pain in three cases is probably worth a critical review (31).

All substances that were found to be effective were used off-label in the studies. In the area of palliative medical care, such off-label use is a typical phenomenon and applies to up to 40% of prescribed medications (39).

This systematic review investigates the effectiveness of pharmacological interventions for pruritus in adult palliative care patients with malignant and non-malignant disorders. The guideline from the German Dermatological Society provides a clinically oriented perspective for the treatment of chronic pruritus (40). The present study describes the effectiveness of:

Owing to methodological problems of the available studies, the results of this review and their generalizability will have to be interpreted with caution. Because of the diversity of palliative care patients with pruritus, any therapeutic approach needs to be carefully considered. The effect of methylnaltrexone and the other substances presented should ideally be investigated in further high quality RCTs.

Acknowledgement
The authors thank Ms Sabine Buroh, librarian at the University Medical Center Freiburg, for her help with the electronic database search. 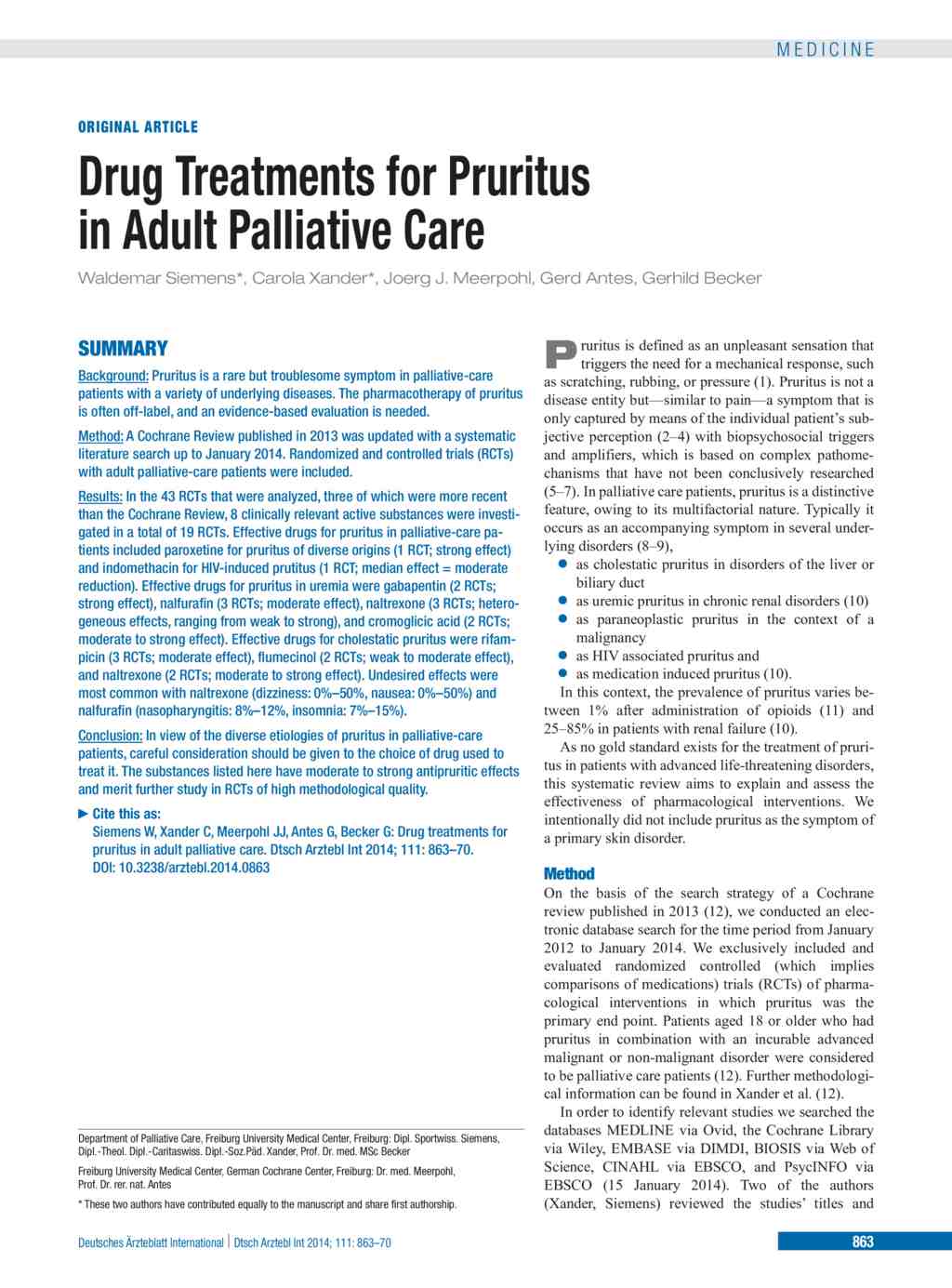