DÄ internationalArchive3/2015How Evidence Based Is the Positioning of Patients With Neurological Illness?

How Evidence Based Is the Positioning of Patients With Neurological Illness?

Developing guidelines and managing patients in accordance with them is becoming increasingly important in the practice of medicine. Evidence-based decisions and actions in conformity with guidelines have become a matter of course in every field where there is enough evidence derived from appropriate studies. In 2012, the German Neurological Society (DGN, Deutsche Gesellschaft für Neurologie) published the fifth edition of its guidelines on the diagnosis and treatment of a wide range of neurological conditions (1).

It is noteworthy not only in how many areas a good body of evidence already exists, but also, and maybe even more so, how many everyday practices and measures have been adopted because they are a matter of custom and habit, although there are no randomized controlled trials that show that they are effective.

This is the case, for example, for the positioning of patients with diseases of the central or peripheral nervous system. The relevant DGN guideline primarily relates to the positioning of the severely paretic or plegic arm after stroke; it also discusses the use of shoulder orthoses and recommends attaching a therapy table to a wheelchair. For patients with increased intracranial pressure, positioning with the upper body raised is desirable. However, guidance as to the positioning of the body as a whole exist neither in German nor in guidelines in other languages such as those of the UK (2) and the USA (3), or if they do exist, they are very general, e.g., indicating a preference for positioning the patient on the paretic side (4). This procedure, which aimed to promote somatosensory afferents by positioning the patient on the affected side, was put forward by the Bobaths in the late 1990s (5). However, the hypothesis has still not been systematically tested.

The study carried out by Pickenbrock and co-authors and published in this issue of the Deutsches Ärzteblatt International (6) addresses this important clinical topic. Their investigation into the positioning of bedfast patients with central neurological disease fulfills the fundamental criteria of a high-quality multicenter scientific study. The authors’ randomized controlled design with blinded investigators has succeeded in recording both objective and subjective variables. The study compared positioning patients in a neutral position (LiN) and in a conventional position. In the LiN, the upper leg, cervical spine, and head in particular are supported with pillows and blankets. In this way, the pressure is distributed more evenly and overstretching or shortening of the muscles is avoided. In contrast to this, in conventional positioning the head is slightly raised, the torso laterally flexed, and the shoulder girdle is translated in the direction of elevation and compressed in the direction of the torso. Being positioned in a neutral position for 2 hours led to better passive range of motion in the hip and shoulder joints and was more often described as comfortable than lying in a conventional position. It made no difference whether the patient was placed on the paretic or the non- or less paretic side. These are potentially important results in terms of patients’ quality of life and mobility.

As in many other studies, the results of this study prompt further important questions, some of which have already been formulated by the authors. The questions relate particularly to the possible long-term effects of neutral positioning. Practical aspects such as the question of whether LiN requires more time than conventional positioning, and if so, how much, need to be presented. Beyond that, it is of great clinical importance to know whether positioning a patient in a neutral position can influence the development of contractures. A recently published Cochrane Review concluded that no-one has yet successfully shown that passive motion has any effect in preventing contractures (7).

This study by Pickenbrock et al. should encourage clinicians to position bedfast patients with central nervous system diseases in neutral positions, while keeping them under careful observation for the appearance of any unwanted effects; so far none have been identified. Future studies of this procedure should not just replicate the short-term results, but should especially investigate long-term effects. They should also record pain as a variable, and should describe patients’ functional status (e.g., using the Barthel index or Functional Independence Measure [FIM]) and follow it up over time.

These findings by Pickenbrock et al. open up the possibility of improving the well-being and mobility of patients in a largely cost-neutral way and with relatively simple means. 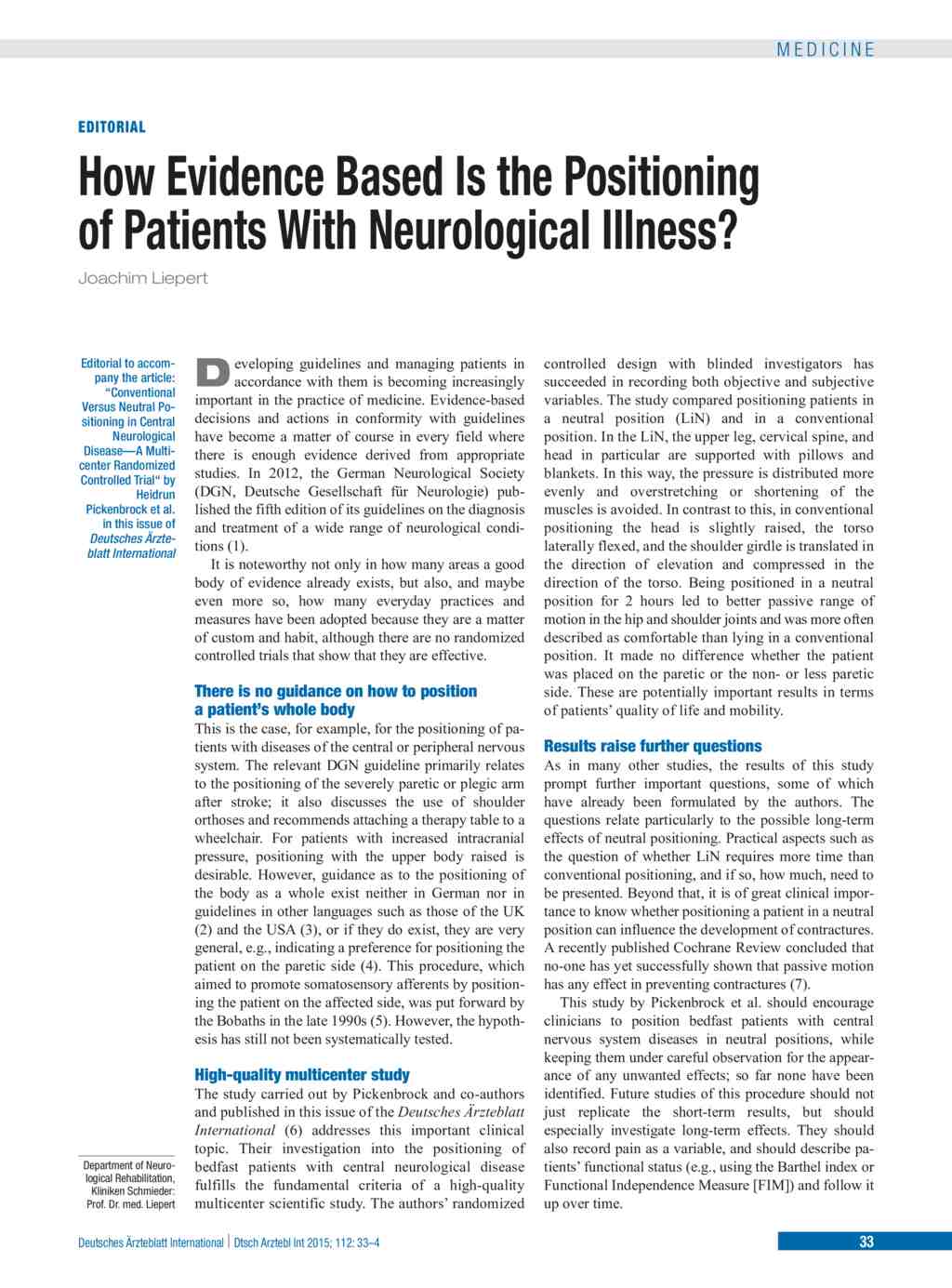