Method: We evaluated the findings of a single-center, questionnaire-based cross-sectional investigation of the social and economic situation of 531 patients (September 2009 to March 2010) and obtained 5-year follow-up data in December 2014.

Results: 38% of the patients were employed after lung transplantation. They took a mean of ten sick days off from work each year; they did not have infections or organ rejection any more frequently than other patients. The five-year follow-up data showed no difference in the overall survival rate of employed and unemployed patients. Employment was associated with a better quality of life (80% [interquartiles: 70%, 95%]) versus 75% [interquartiles: 50%, 85%], p = 0.001). Factors associated with a return to employment included a higher educational level (odds ratio [OR] 2.6, 95%confidence interval [CI] 1.7–4, p = 0.001) and better physical fitness (OR 2, 95%CI 1.3–3.2, p = 0.001).

Conclusion: The rate of return to work after lung transplantation in Germany is similar to the rates observed in other countries. The findings of this study imply that employment improves the quality of life and does not endanger health. Thus, patients who have received lung transplants should be advised to return to work if possible.

Return to work is a reflection of successful transplantation and of an improved quality of life. There has been no study to date of lung transplant recipients’ return to work in Germany. In other countries, it has been found that 30 to 37% of patients return to work (6–8). The resumption of work is economically beneficial not just to the patient, but also to society as a whole.

The cross-sectional study included patients who attended the outpatient lung-transplant clinic at the Medizinische Hochschule Hannover from September 2009 to March 2010 for their follow-up care. The central instrument of the study was a questionnaire that all patients were asked to fill out (eQuestionnaire). They were allowed to have help from other family members in filling it out. Patients who had received their transplants less than six months previously were considered separately, as experts in social medicine generally consider that patients should not return to work in the first six months to allow optimal healing. Characteristics of the included patients are seen in Figure 1. All of the patients consented to inclusion in the study by filling out the questionnaire. The study was approved by the local ethics committee (no. 549). 5-year follow-up was carried out in December 2014.

The patients filled out a questionnaire that contained 38 questions on the following topics (eQuestionnaire):

The questionnaire was developed specifically for this study of lung transplant recipients by a team of physicians. A test run was carried out on 5 persons (doctors and clinic staff) and the results were used to improve content and intelligibility. The questionnaire consisted of 26 multiple-choice questions with 2–8 possible answers each, 11 questions with simple numerical answers, and one open question. Filling it out took 15–20 minutes.

5-year survival figures were obtained in December 2014. Data were also obtained on the patients’ quality of life, physical performance ability, and degree of rejection.

During the period of the study, 586 patients were seen in the outpatient lung transplant clinic, of whom 531 (90.6%) agreed to fill out the questionnaire. Of the 476 participating patients who had received their transplants more than six months previously, 150 filled out the questionnaire completely and 326 did not answer one or more questions; the median number of questions omitted was 1 (IQR 0; 3).

Among the 476 participating long-term transplant patients, 179 (37.6%) were employed at the time of the study. The demographic and socio-economic features of the employed and unemployed patients are compared in Tables 1 and 2. The two groups did not differ in the medical diagnoses that had led to transplantation (Figure 1). The median time from transplantation to the return to work was 11 months (IQR 6; 15), and the median number of working hours per week was 15 (10; 20). One-quarter of the employed patients said they were working full time. The median number of days absent from work due to illness in the previous year was 10. Of the 179 employed patients, 64 (35%) said they had returned to the same job they had before transplantation, 11 (6%) said they had changed occupations, and 3 (1.5%) said they had been retrained; the remaining 101 patients gave no information in this respect. The patients’ reasons for returning to work and problems experienced at work are shown in Figure 2.

Table 1
Demographic data of long-term transplant recipients, i.e., those who underwent transplantation more than 6 months before partcipating in the study
Enlarge All figures

The unemployed patients said they were not working because of health problems (40%), inability to find a job (22%), disability payments (16%), or family reasons (6%).

153 patients (32%) underwent inpatient pulmonary rehabilitation before transplantation, and 337 (70%) did so afterward.

Subjective assessment of the quality of life

Working patients were more commonly single (Table 2). 76 (14%) of the entire patient collective required nursing care. The degree of disability and annotations in the handicapped pass are listed in Table 2.

Differences at 5 years regarding survival, chronic transplant failure, and quality of life are presented in Table 3.

Of the 55 patients who had received their transplants less than six months before participating in the study, 14 (25%) were employed at the time of participation. In December 2014, the 30 surviving patients in this group were questioned again by telephone about their employment situation one year and five years after transplantation. 9 of the 30 patients (30%) were employed one year and five years after transplantation. One of the initially unemployed patients had begun working, and one of the initially employed ones had left his job. Two-thirds of these patients were working part time.

This study is both the first study of the socio-economic status of lung transplant recipients in Germany and the one with the largest patient cohort worldwide. Earlier studies from the USA, Italy, and Belgium included 190, 72, and 84 patients, respectively (references 7, 10, 6, respectively). We found that more than one-third (38%) of lung transplant recipients were able to return to work in the long term.

Similar results were obtained in studies from abroad: the rate of return to work was 37% in a study from the USA and Canada (7) and 39% in an Italian study (10). The lowest and highest rates were found in Belgium (28%) (6) and Taiwan (42%) (11), respectively. Thus, although patients in Germany benefit from a more extensive social safety net than those in other countries, their rate of return to work is comparable.

The patient’s level of education has been found in previous studies of transplant recipients to be an important factor affecting the return to work (8, 14). Thus, patients with a university degree have a relatively high rate of employment after transplantation. Alexopoulos and Burdorf studied the effect of educational level on the return to work in patients with asthma and COPD: blue-collar workers returned to work later than white-collar workers did (13). Some jobs cannot, as a rule, be performed by lung transplant recipients at all, both because physical performance ability after lung transplantation is only roughly half of that in non-transplanted persons (15), and because certain occupations are associated with an elevated risk of infection (e.g., farming, gardening, animal care). The same holds true for heart transplant recipients (16).

The connection between employment and physical performance ability is obvious. It is noteworthy, however, that physical fitness and the frequency of participation in sports are not correlated with each other. Thus, the higher performance ability of the employed patients may be due to a physical training effect of the job itself. The questionnaire in this study gave only an incomplete picture of the quality and intensity of physical training; in the end, the question of causation cannot be satisfactorily answered from the present data.

Most of the employed patients were employed part time; only one-quarter were employed full time. They took an average of 10 sick days off from work per year. This number was very close to the national average for the overall population (8.4 days—figure for 2012 from the German Federal Statistical Office).

Previous studies have shown that patients may be kept from returning to work not only by advanced age, poor health, or financial benefits (8, 14, 17, 18), but also by the fear of contracting an infection in the workplace (7). In this study, however, the employed patients were not hospitalized any more frequently (or with more inpatient days) than the unemployed ones, not did they suffer from organ rejection any more frequently. The evidence thus suggests that returning to work does not, in fact, endanger health. This conclusion is further supported by the lack of any difference between the employed and unemployed patients at 5 years of follow-up with respect to overall survival, extent of organ rejection, or physical performance ability. The official degree of disability (Grad der Behinderung) of lung transplant recipients is 100% in the first two years after transplantation, as recommended by the German Federal Ministry of Labor and Social Affairs; after the first two years, at least 70% disability is recommended (19).

The main limitation of this study lies in its design and in the nature of data acquisition by questionnaire. For example, the number of sick days taken off from work and the number of days spent as a hospital inpatient in the last twelve months were determined only from the patients’ statements and not checked against documented facts. The same holds for physical performance ability. Thus, the question whether the employed patients’ better quality of life might actually have been due to better health, rather than job satisfaction, cannot be answered with certainty.

Lung transplant recipients should be encouraged to return to work as long as their job poses no special risk to health.

Physicians should help their patients return to work by providing positive support and by allaying fears that working might expose the patient to higher rates of infection or organ rejection (which it does not). Barriers to the return to work, such as overprotective family members or the potential employer’s fear that the patient will have to take many days off because of illness, can be broken down by the physician with an explanation of the facts. On the societal level, because the number of persons bearing organ transplants over the long term seems certain to grow, there should be discussion of a more flexible financial safety net for these patients, so as not to discourage their return to work. An important aspect of this would be an unbureaucratic transition from a disability pension to income gained through work.

The authors would like to thank Christiane Kugler (Universität Witten/Herdecke), Bianca Rink, Linda Häsler, and Imke Zinowsky for their participation in the performance of the study, and Jan Fuge for carrying out the statistical evaluation.

Table 1
Demographic data of long-term transplant recipients, i.e., those who underwent transplantation more than 6 months before partcipating in the study
Enlarge All figures 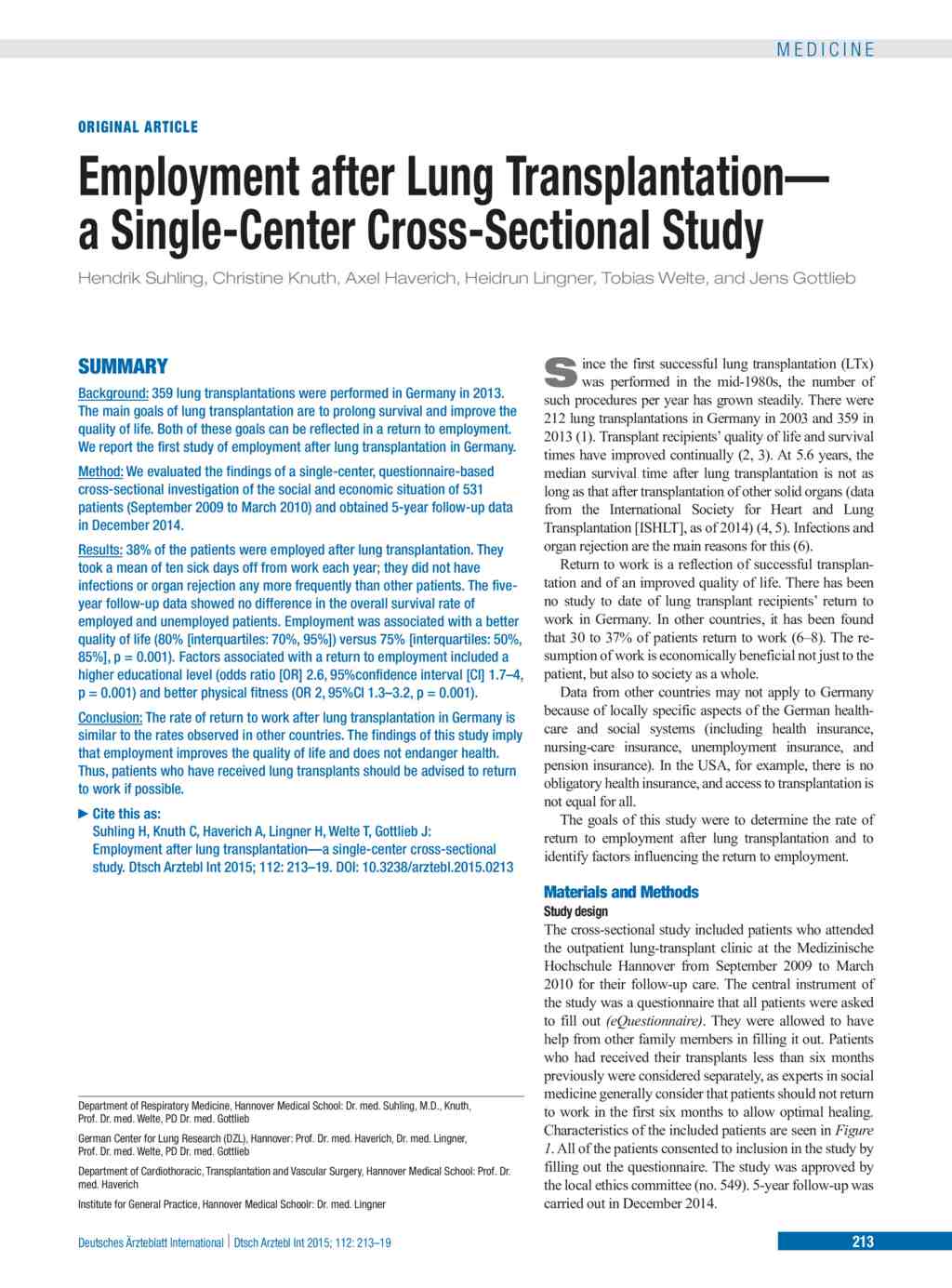