The Cardiovascular Effect of Musical Genres

A randomized controlled study on the effect of compositions by W. A. Mozart, J. Strauss, and ABBA

Methods: 60 subjects were randomly assigned to three groups that listened to various compositions by W. A. Mozart, J. Strauss Jr., or ABBA for 25 minutes. Their serum cortisol concentrations, heart rate, and blood pressure were measured before and after the listening session. The same variables were measured in a control group of 60 subjects who did not listen to music but rested in silence.

Conclusion: Music by Mozart and Strauss lowered the subjects’ blood pressure and heart rate, while music by ABBA did not. Mozart’s music had the strongest effect; the piece used was his Symphony No. 40 in g minor (KV 550).

It has been known for centuries that music has an effect on human beings (1, 2). In antiquity, music was used to improve performance in athletes during the Olympic Games, and narrative anecdotes also contain indications of its effects (3). Studies have investigated the influence of music in the setting of different clinical symptoms/conditions, surgical procedures, or in pain management and palliative medicine (4–6). In 2009, Bernardi et al. published a study that met with much attention, which had analyzed the effect of music on cardiocirculatory parameters in 24 volunteers (7). Systematic prospective randomized studies that investigated different musical genres (music from the era of Viennese Classicism, music from the Romantic period, or contemporary classical music) with a view to their influence on different cardiocirculatory parameters in larger cohorts are lacking.

All subjects were examined according to a strictly defined study protocol (eTable 1, eBox).

A total of 120 participants were included in our prospective randomized controlled study, of whom 60 were allocated to the study group (“listening to music”) and 60 to a control group without music (“silence”). The following inclusion criteria were applied: the male or female participants aged between 25 and 75 years had to be cardiologically healthy (normal cardiological history, normal clinical findings, ECG and blood pressure in the normal range) and had to be medication-free. Normal blood pressure values were defined as measurements below 140/90 mm Hg (8). Subjects with known labile or stable arterial hypertension were excluded from the study.

Our study compared a group listening to instrumental music from the Classical and Romantic periods and pop music with a control group not listening to music. The selected music consisted of highly popular and well known pieces and songs: Symphony No 40 in g minor (KV 550) by Wolfgang Amadeus Mozart (1756–1791), dances by Johann Strauss Jr. (1825–1899), and songs by the Swedish pop band ABBA. The total duration of the musical pieces played came to roughly 25 minutes in each intervention group (eTable 2). The sequence in which subjects listened to the three sonic scenarios was set according to a randomization plan. For each intervention with music and for the control group, we defined clear entry points (normal cardiological findings, normal blood pressure [RR]) and end points (running the complete study protocol), which remained unchanged during the course of the study (8). All investigations took place in a study room, where subjects were lying on a lounger, in a relaxing environment with a room temperature of 23 degrees Celsius, listening to music through headphones or spending the time in silence (control group).

The study participants were recruited by means of notices put up in Marienhospital Herne and in the MA building at the Medical Faculty at Ruhr University Bochum. We targeted healthy volunteers, not patients. All subjects were examined according to a strictly defined study protocol consisting of six phases (eTable 1). The music sequences were randomized before the start of the study by means of computerized random number generation. 60 subjects (30 men and 30 women) were included in the intervention group, of whom half were younger than 50 and the other half older than 50 years of age. The age and sex distribution of the control group was identical. Random allocation was undertaken before the start of the study by the principal investigator (HJT); the study doctor (GV) admitted participants into the study and, on the study day, allocated them to the respective interventions (musical genres).

The statistical analyses were done using the programs SAS 9.2 and Stata/IC 11.2. In order to compare the distribution of a metric variable in two independent samples, the Shapiro–Wilk test was initially used. If the assumption of a normal distribution was not refuted, the comparison was done by using the t test for linked samples. Where the population could not be assumed to be normally distributed, the Wilcoxon signed rank test was used.

We screened 139 subjects, of whom 19 had to be excluded because of previous cardiac conditions, medication use, or high blood pressure measurements (eFigure). Altogether, 60 subjects were allocated to the intervention using music and 60 were included in the control group. The study started on 1 May 2012 and ended on 25 March 2013. It was conducted without any problems in all subjects and did not have to be interrupted or terminated early. No differences existed between the intervention and control groups regarding age, height, weight, and body mass index (BMI) (Table 1).

Table 2
Changes in systolic blood pressure under exposure to the music of Mozart, Strauss, or ABBA, compared with controls
Enlarge All figures

Table 3
Change in diastolic blood pressure as a result of exposure to the music of Mozart, Strauss, or ABBA, compared with controls
Enlarge All figures

The present study found that music had a positive influence on heart rate (Table 4). At baseline, before listening to music, subjects had a mean heart rate of 70.9 ± 12.3 beats per minute (bpm). All three types of music notably lowered subjects’ heart rate compared with baseline (baseline value versus Mozart p<0.001; baseline versus Strauss p<0.001; baseline versus ABBA p = 0.003). The greatest effect on heart rate lowering was observed for Mozart’s music: the mean fall in heart rate was 5.6 ± 9.8 bpm. Listening to Strauss’s dances lowered subjects’ heart rate by a mean of 4.7 ± 9.3 bpm. The songs of ABBA also lowered the heart rate, but to a less pronounced degree: 3.0 ± 7.4 bpm (Table 4). In the control group, the heart rate fell to 5.4 ± 8.1 bpm (p<0.001).

Table 4
Change in heart rate during exposure to the music of Mozart, Strauss, or ABBA, compared with controls
Enlarge All figures

Table 5
Change in serum cortisol concentrationbs as a result of exposure to the music of Mozart, Strauss, or ABBA, compared with controls
Enlarge All figures

The question of whether and how music affects human beings has long been a topic of interest for academic studies (1, 9). Individual studies have been presented that showed measurable effects in people. But these studies were based on individual observations that made comparisons of the identified effect directions between studies impossible. The focus was not on the musical genres and the associated immediate effects. The literature contains very little on such effects—be they the effect of specific compositional schemes, the use of language, or the influence of specific listening habits.

The results of our prospective study enable us to answer some of the questions and have shown that the music of Mozart and Strauss prompted falls in systolic and diastolic blood pressure, but the music of ABBA did not. In this setting it is obviously the musical genre that is of relevance to the observed effects, and the composer is of only secondary relevance.

In 2009, Bernardi et al. reported a small randomized controlled study, which showed measurable effects on the vascular system and blood pressure for classical music (7). However, subjects’ exposure to music was very brief and the number of subjects was small. The authors showed vascular dilatation and a drop in blood pressure in subjects listening to classical music. The most beneficial effects were observed for the music of J. S. Bach, whereas the music of Beethoven died not have such positive effects. The authors explained these phenomena with different changes in tempi, sound volumes, and the musical dynamics of Beethoven (7).

In our study, listening to classical music resulted in lowered blood pressure and heart rate. These drops in blood pressure were clearly expressed for the music of Mozart and Strauss; no notable effect was seen for the music of ABBA. In the control group, lying down in a resting position also prompted a fall in blood pressure. The study of Bernardi et al. made mention of the compositional form as a crucial factor of influence and found the music of J. S. Bach especially beneficial (7). However, no specific characteristics exist for the effects of Bach’s music (10). Indications that rhythms using six cycles per minute were beneficial were described, as were positive effects for uniform music (11, 12). Quiet music of a slow tempo, long legato phrases, and unchanging dynamics are regarded as beneficial for the cardiocirculatory system (13).

The music of Mozart and cardiovascular parameters

In recent years, many studies have investigated the music of Mozart (14–16). It was described how neonates whose mothers had been listening to the music of Mozart during their pregnancies were calmer and less aggressive after the birth (17, 18). Mozart’s music has also been recommended as relaxation music (19–21). Hughes et al. undertook a computer analysis of compositional characteristics and found that the music of Mozart has an above-average degree of periodicity (22). Analyses of the musical scenarios of this study also hint at notable periodicity, repetitions, and effects of recognition. According to these insights, the symphony in g minor is particularly beneficial for the cardiocirculatory system because of the special arrangement of its compositional elements.

In the present study, the music of Strauss prompted notable falls in blood pressure, heart rate, and the comparatively greatest fall in cortisol concentrations. In the case of Strauss, this effect can also be explained with compositional form. Strauss’s dances are based on simple structures, catchy melodies, and periodically recurring forms. The dances were written for entertainment purposes, with catchy harmonic sequences and without any distinctive dissonances (23). Strauss adds graceful elegance to his works by means of rhythm and instrumentation (24, 25). Through his compositions he speaks to human emotions that have a crucial role inprocessing music (26, 27). It is therefore plausible that the dance element of Strauss’s music may affect cardiocirculatory parameters.

The music of ABBA did not show any or only very small effects on blood pressure and heart rate. This may be due to emotional factors, but on the other hand the use of spoken words may have a negative role (28). Studies have shown that adding vocals to instrumental music activates different regions in the brain and may lead to different sensations. Adding vocals to sad music intensifies its emotional impact; cheerful music has a greater emotional impact without words (9, 10). Independently of the qualitative effect, increased neurological activation should be considered, which is triggered by the processing of the vocals/lyrics. The compositional idea, linearity, and melodic characteristic can be affected—and even disrupted—by the distribution of the vocals/lyrics (27). It is conceivable that the artificial generation of the ABBA sounds has a role, and that this is potentially crucial for the observed phenomena (28).

Music affects human beings and influences them in very different ways. Although several studies have shown the effect of music on cardiovascular parameters, no musical influencing variable with a direct effect on the cardiocirculatory system is known.

Interesting research objectives include studies of the question of which musical genres or even which concrete piece of music has optimal characteristics in terms of a relaxing effect, also with a view to long-term effects. Studies on influencing and changing cortisol concentrations are also important. The following factors seem to be relevant for the positive effect of a piece of music:

Registration
Our study was approved by the ethics committee at Ruhr University Bochum according to national legal requirements and the ICH-GCP guidelines, and it was registered under the register number 4221–12.

The study was retrospectively registered in the German Clinical Trials Register (DRKS) (DRKS00009792).

We used the following sound recordings: 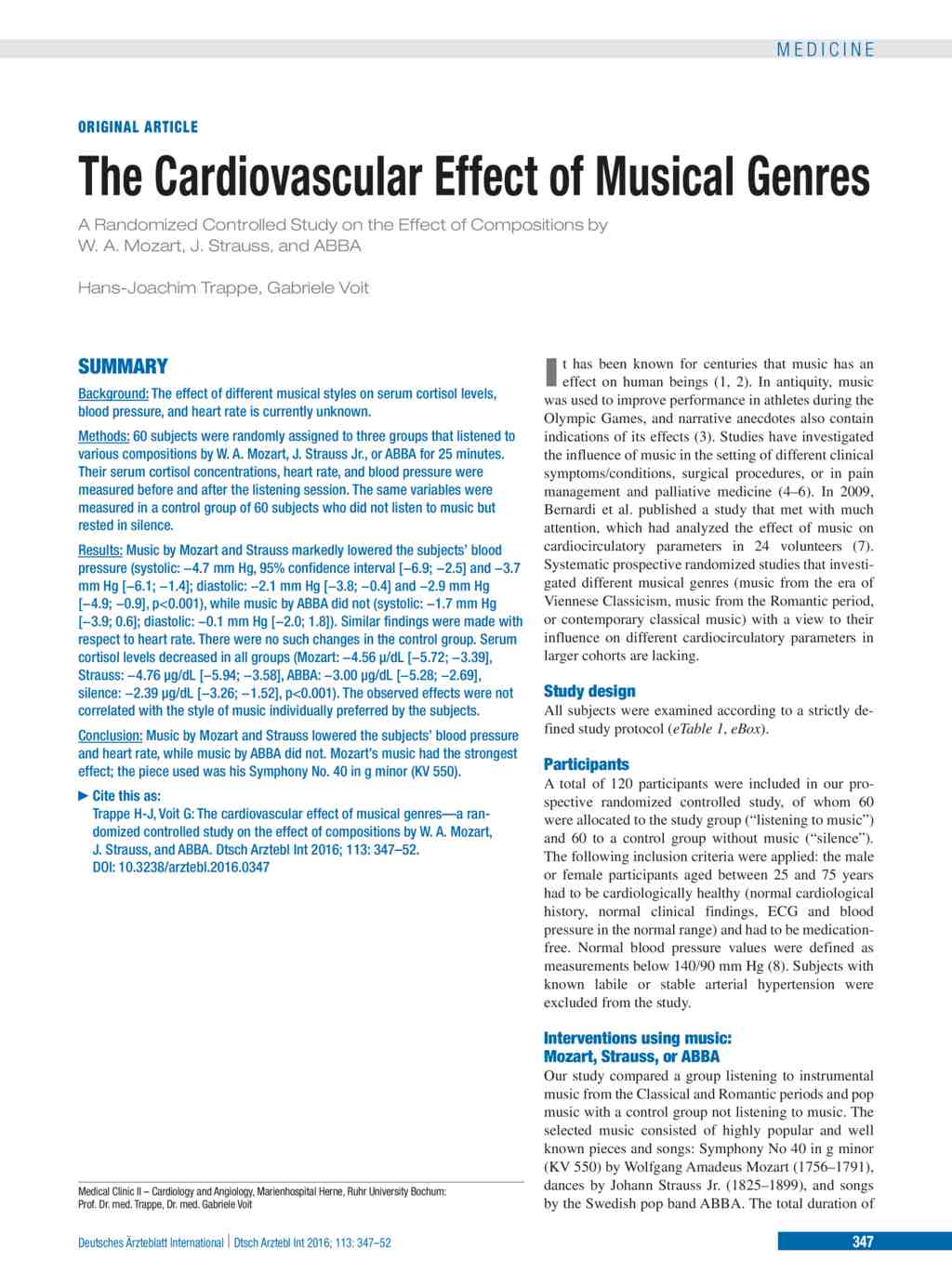