A Retrospective Multicenter Observational Study From the MicroTrans Registry

Background: The clinical effectiveness of fecal microbiota transplant (FMT) for the treatment of recurrent Clostridium difficile infections (rCDI) has been demonstrated in randomized controlled trials. To assess the current status of FMT in Germany with respect to active centers, local standards, clinical effectiveness and safety, the MicroTrans Registry (NCT02681068) was established.

Methods: In a long-term retrospective multicenter observational study by the German Clinical Microbiome Study Group (GCMSG), primary and secondary cure on day 30 and 90, as well as occurrence of treatment-related adverse events were assessed. In addition to patient demographic data, we provide an overview of the FMT procedures and techniques used at different centers.

Conclusion: FMT is a safe and effective treatment option for rCDI. However, FMT is currently available only in few centers in Germany, and treatment options vary from one center to another.

Fecal microbiota transplant (FMT) has been recognized as a feasible and effective procedure decades ago, however, the first randomized trial assessing the clinical efficacy of FMT by duodenal infusions, achieving sustained clinical cure in over 90% of patients with rCDI was not published until 2013 (5). The success of this previously unpopular approach fueled various research efforts. In this context, other routes of application, i.e.

as well as improvement of FMT product storage using cryopreservation were assessed with favorable results (6–8). While most of these studies were observational, limited to one interventional treatment arm or to a small number of patients, a milestone randomized double-blind trial assessing the clinical efficacy of frozen as opposed to fresh FMT enemas in 232 adults was recently published and confirmed non-inferiority of frozen preparations (9). Inspired by the clinical impact of FMT and its rapid technical improvement, the interest of physicians in integrating FMT into their clinical armamentarium against rCDI is growing (10, 11). In this setting, physicians are likely to encounter difficulties when searching for reliable standards with respect to donor screening, microbiota preparation, and route of administration. At the same time, colleagues considering referral of patients for FMT have difficulties identifying qualified centers.

To assess the current status of FMT in Germany with respect to active centers, local standard procedures, as well as clinical effectiveness and safety, we have created the MicroTrans Registry and herewith present results of its first dataset.

This is a long-term, retrospective, multicenter, observational study by the German Clinical Microbiome Study Group (GCMSG), registered at ClinicalTrials.gov under registration no. NCT02681068. A survey requesting information on the status of implementation of FMT was sent out to all member departments of the German Society of Digestive and Metabolic Diseases (DGVS), as well as to all medical centers that had already published reports or press releases of FMT performed at their institution. All centers that responded to this initial survey were contacted for detailed data from individual patients. Centers with no human resources for documentation were provided with a documentation assistant from the GCMSG.

Only patients undergoing FMT for recurrent or refractory CDI could be documented in an online eCRF (electronic case report form) from ClinicalSurveys.Net (12). CDI was defined as per the recent ESCMID (European Society for Clinical Microbiology and Infectious Diseases) guidelines (3). The standards used for conduct of FMT at the participating centers were at the discretion of the attending physician. Details on the captured patient-level data are shown in the Box.

Adverse events (AE) were documented only if considered at least potentially related to FMT. Data was entered into the database based on a review of the patient charts. Anonymized data from all participating centers were exported, tabulated, and analyzed centrally.

Response to FMT treatment was defined as absence of diarrhea after FMT for at least 48 hours. Primary cure at day 30 and day 90 was defined as resolution of CDI after FMT until the respective time point. Secondary cure criteria were fulfilled, if one or more further FMTs were necessary to achieve a sustained day 30 or day 90 response. Recurrence was defined as the occurrence of CDI after an initial response to treatment.

Statistical analyses were carried out using IBM SPSS Statistics software. Analysis of frequencies was performed in a descriptive fashion.

The study protocol was approved by the local ethics committees of each participating center.

Overall, 720 German medical centers were contacted, of which 366 responded. Among them, we identified 39 medical centers performing FMT. Out of these, 33 centers documented 147 patients between January 2014 and February 2016. 133 of these met our inclusion criteria, while 14 documented patients had received an FMT for an indication other than rCDI. The median number of patients documented per site was 2 (range: 1–24). Patients were treated between November 2011 and July 2015.

The patient characteristics are shown in Table 1. Most patients receiving FMT were females (n=86; 64.7%) of advanced age (median: 75 years; interquartile range [IQR]: 59.5–81.5). The median ECOG score was 2 (IQR: 1–3). The most frequently documented comorbidities consisted of the following types of condition:

A total of 3 patients (2.3%) had received chemotherapy within the last three months prior to FMT or were immunosuppressed for other reasons (n = 19; 14.3%). The median number of episodes before undergoing FMT was three (IQR: 1–4). The mean time to FMT after first diagnosis of CDI was 120 days (IQR: 60–210). Sixteen patients (12.0%) received FMT due to lack of response to all standard treatments. For treatment of previous episodes, most patients received sequential metronidazole and vancomycin (n = 61; 45.9%) or metronidazole, vancomycin and fidaxomicin (n = 34; 25.6%).

A total of 16 patients (12.0%) experienced an AE. The following types of AE were classified as certainly or probably related: nausea, fever, abdominal pain, belching, emesis, throat/retrosternal discomfort, aspiration pneumonia (acquired during endoscopy), loss of a tooth (during endoscopy), irritable bowel syndrome, and hemorrhage (during endoscopy). A possible relationship was considered for food intolerance, weight gain, and polyneuropathy. None of these patients died within the following 30 days of the documented AE.

Response by route of administration, antibiotic induction therapy, and performance of a preparatory bowel lavage is given in Table 3. Patients receiving FMT by application into the rectum/colon/terminal ileum experienced a primary response on day 30 and 90 in 89.6% (n = 43/48) and 83.3% (n = 25/30). For patients receiving FMT by application into the duodenum/jejunum, the respective results were 78.9% (n = 45/57) and 74.0% (n = 37/50). Patients taking capsules were cured in 84.6% (n = 11/13) and 83.3% (n = 10/12) of cases. Response rates were similar in patients with and without antibiotic induction therapy and with and without a preparatory bowel lavage, respectively.

Table 3
Primary response on day 30 and 90 by route of application, antibiotic induction therapy, and performance of bowel lavage
Enlarge All figures

During the observational period, seven patients (5.3%) died, two of them within 90 days of FMT. In six cases, the cause of death was not related to rCDI (solid tumor, hematological malignancy, urinary tract infection, pulmonary embolism, pneumonia (n = 2). In one patient, recurrence of CDI 7 days after FMT contributed to her death. A cerebrovascular accident was, however, provided as the primary cause of death.

The MicroTrans Registry is the first structured documentation of procedures, clinical effectiveness, and safety of FMT in Germany. We documented a primary and secondary cure rate at day 90 of 84.2% and 85.9%, respectively. In the two largest US American observational studies, one in elderly patients and one in immunocompromised patients treated for rCDI, comparable 90 day primary and secondary cure rates of 78.0–82.5% and 89.0–95.9%, respectively, were observed (7, 13). An overview of outcomes available from the literature is shown in Table 4.

We recognized a trend towards improved response associated with application via the lower gastrointestinal route, followed by encapsulated frozen oral preparations. Furthermore, response rates were similar in patients with and without antibiotic induction therapy and with and without preparatory bowel lavage, respectively (Table 3). However, these findings do not allow any conclusions on the impact of these measures on clinical effectiveness of FMT, since there are a number of limitations to our retrospective data collection, e.g. centers using the duodenal route as their standard may also be following different pre-FMT procedures that may impact treatment success. At this point, our data do not yet allow logistic regression analysis adressing all relevant confounders. However, we have identified this point as one key question that merits further attention from our study group.

The scope and severity of AE in our study and previous observational studies are difficult to compare, since standards for adverse event reporting differed between studies. However, if only events potentially related to FMT are considered and compared, self-limiting gastrointestinal events in direct temporary association with the FMT dominate the AE spectrum. In major interventional and non-interventional studies as well as our own observation, aspiration during endoscopy was the most consistently, yet unfrequently reported serious adverse event (5, 7, 9, 13).

eTable 2 gives an overview of all adverse events documented in published randomized trials with a suspected relation to FMT.

Our study was limited by the inherent problems of observational studies. Follow-up differed widely, most likely due to the majority of patients being admitted specifically for their FMT procedure and being discharged shortly after the intervention. In the absence of a further rCDI or other medical problems, patients may be less likely to re-contact the performing institutions. This presumably indicates that our primary and secondary cure rates reflect clinical sustainability, since patients not returning are more likely to have experienced cure.

Concerning methodological aspects, we were able to show that FMT has already been implemented in a considerable number of German medical centers. However, treatment approaches differ considerably. To improve reproducibility of results and assure patient safety, harmonization of protocols for selection of eligible patients, donor screening, processing of stool samples, and administration of FMT products is urgently needed.

Only four centers documented more than 10 patients. Since documentation is not mandatory, it is possible that the participating centers documented fewer patients than actually treated. Irrespectively of this possible documentation bias, it may be assumed that some centers will emerge as top performers with respect to patient numbers, especially when considering the high costs, human resources, and time-consuming processes required to implement and maintain FMT as a readily available treatment option. This is especially relevant to physicians practicing within the German health care system, which currently does not provide reimbursement of the costs of FMT to the performing institution. Reimbursement and further regulation of FMT seems imperative, to ensure quality and safety of this very effective procedure. The favorable results from clinical trials should expedite implementation of reimbursement; however, the financial and regulatory status of FMT remains a matter of controversy in many countries, resulting in divergent decisions by the relevant authorities. The US Food and Drug Administration has set up a comparatively simple process to register an FMT in a clinical setting as well as to file an investigational new drug application as a basis for conducting a clinical trial. Presently, FMT is classified by German authorities as a medical drug regulated by the German Medicines Act (personal communication). Therefore, physicians in Germany may only perform FMT as a so-called individueller Heilversuch (treatment of last resort). The conduct of randomized controlled trials in Germany remains challenging, due to the high requirements set by the Medicines Act.

The data presented here represent a starting point for the continuous documentation of FMT in Germany. In our future analyses, we will focus in more detail on long-term safety aspects, and on the importance of supportive measures such as bowel lavage, route of administration, antibiotic induction therapy, proton pump inhibitor administration etc., for achieving a favorable treatment outcome. Additional centers, not only in Germany, but also on an international level, are invited to participate in this ongoing study.

Professor Storr has received consultancy fees and honoraria for speaking at scientific meetings from Astellas.

Dr. Lübbert has received consultancy fees from MSD as well as reimbursement of conference fees, travel and accomodation costs, and honoraria for preparing scientific meetings from Astellas and MSD. He received funds paid into a third-party account from Astellas.

Dr. Tacke has received reimbursement of travel costs and conference fees from Pfizer and speaker fees from Merck and Astellas.

Professor Lerch has received consultancy and reviewer fees and received funds for a research project that he initiated from Astellas and Norgine.

Table 3
Primary response on day 30 and 90 by route of application, antibiotic induction therapy, and performance of bowel lavage
Enlarge All figures 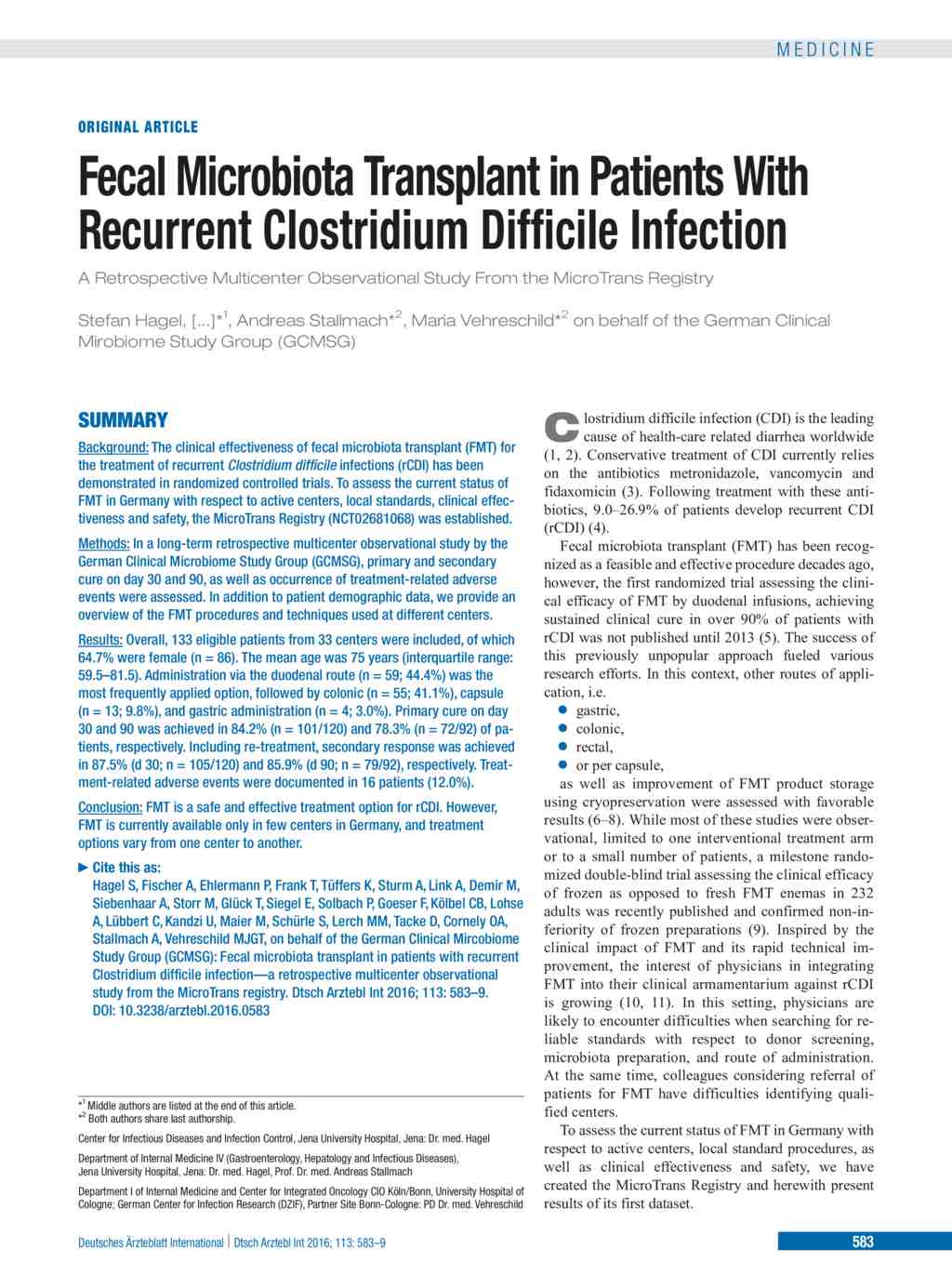