Home, Lifestyle and the Burden of Disease

Dtsch Arztebl Int 2016; 113: 703. DOI: 10.3238/arztebl.2016.0703
Editorial to accompany the articles: „Regional Differences in the Prevalence of Cardiovascular Disease—Results from the German Health Update (GEDA) from 2009–2012“ by Christina Dornquast et al. and „Time Trends in Cardiometabolic Risk Factors in Adults—Results from Three Nationwide German Examination Surveys From 1990–2011 “ by Jonas D. Finger et al. in this issue of Deutsches Ärzteblatt International

This issue of Deutsches Ärzteblatt International features two articles dedicated to regional variation in cardiovascular disease and risk factors across Germany (1, 2). Their findings are a source of both elation and frustration. One of the positive aspects is the fact that over the past 20 years the Robert Koch Institute has built up an efficient, high-quality system of health reporting, providing the reliable data source that allows the discussion on the occurrence and causes of such regional variations. It is also good to see that the wide gap between east and west in the prevalence of cardiovascular disease and its risk factors at the time of German reunification has narrowed considerably in the course of a single generation. Furthermore, the decreasing prevalence of some of the factors contributing to an unhealthy lifestyle shows that changes in health-related behaviors, e.g., the level of physical activity, really can really be achieved at the population level. Finally, the low prevalence of cardiovascular disease in some federal states such as Baden-Württemberg, even by international standards, indicates what could be achieved with regard to the cardiovascular disease burden in Germany as a whole.

This is where the frustration kicks in. Germany displays steep gradients between regions, not only in key economic data and social factors, but also in the burden of various diseases and their risk factors. For many illnesses this gradient runs from northeast to southwest, with a far heavier burden of risk and disease in northeastern Germany. Cardiovascular disease belongs to the group of illnesses whose prevalence follows these differences in economic and social factors. They are closely related to the so-called social divide that has been constantly widening in Germany in recent years. Moreover, it is frustrating that the cardiovascular disease burden and risk factors still differ between eastern and western Germany after one generation, and that risk factors such as smoking and obesity have stayed unchanged for decades or even increased.

The authors of one article analyzed the differences in the prevalence of disease burden among the federal states of Germany (1), while in the other study the investigators chose to evaluate differences in time trends for risk factors between the east and the west of the country (2). Analysis by federal state has certain advantages, because the responsibility for many features of planning and care in the health system is located at state level. This approach has limitations when it comes to aspects of care organized at supra-state level or assessment of regional differences within a single state. However, the data on differences at district or suburb level in Germany remain sparse. The few studies completed, e.g., on diabetes (3), show that variations in disease burden can be analyzed at four levels (between eastern and western Germany, between federal states, between municipalities and between neighborhoods within a municipality), with differing conclusions as to the action required.

Combined elation and frustration is a state that invites contemplation: For instance, whether health system resources should be allocated according to the actual disease burden rather than population density. Or the question of what strategies could help reduce the variation in risk factors among the regions of Germany and how any measures taken can be observed in the context of health reporting to evaluate their efficacy. Furthermore, the results of the two studies give rise to new questions, e.g., whether there are differences among the federal states in the quality of care afforded to patients treated for cardiovascular disease. The answers to these questions can only be provided by analyses and surveys in the framework of the health reporting system, which will have to be adapted to meet this demand. 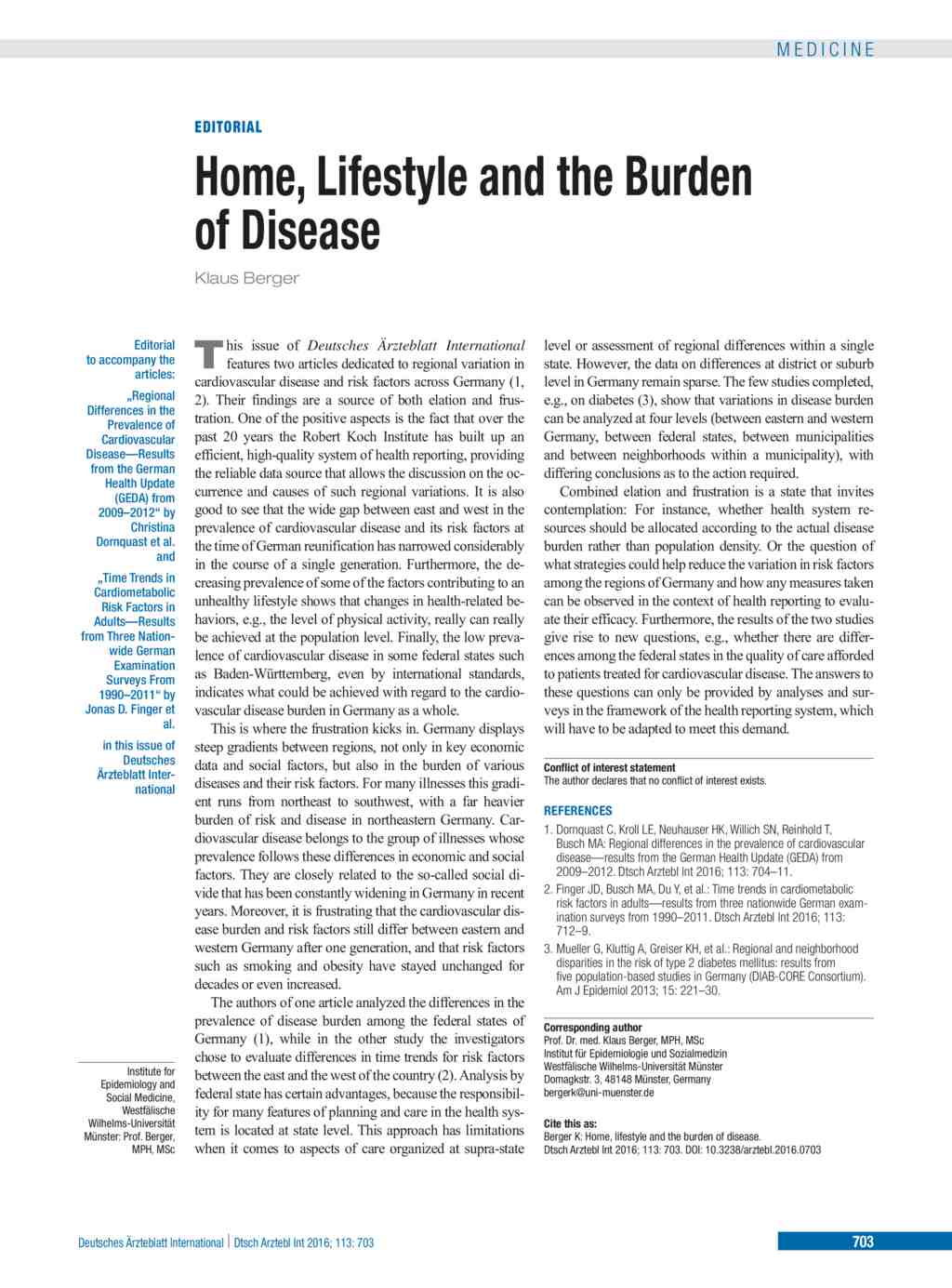