The Treatment of Scabies

Background: Scabies is a contagious infestation transmitted by skin-to-skin contact and sometimes by contact with contaminated material. The scabies mite burrows into the skin, producing a papular rash and severe itch at typical sites of predilection.

Methods: We systematically reviewed the literature to compare the efficacy of various anti-scabies agents, including a calculation of relative risks and confidence intervals.

Results: A literature search yielded 596 initial hits; after screening in accordance with the defined inclusion and exclusion criteria, 16 studies were selected for this review. Among topical treatments for scabies, permethrin was equally effective or more effective than crotamiton or benzyl benzoate. In a comparison of topical versus systemic treatment, topical permethrin and systemic ivermectin did not differ substantially in efficacy (7 comparative studies revealed no difference; one revealed a difference in favor of permethrin). Comparative trials of topical benzyl benzoate versus systemic ivermectin yielded inconsistent findings. Single and double administrations of ivermectin were similarly effective. In trials involving entire populations with a high prevalence of scabies, systemic ivermectin was found to be superior to topical permethrin.

Conclusion: There are hardly any differences in efficacy between the available treatments for scabies. Single administrations of permethrin 5%, crotamiton 10%, and systemic ivermectin are all comparably effective. There are differences in the frequeny and ease of application as well as when eradicating scabies in populations with a high prevalence.

Scabies is a common skin disease worldwide, particularly in developing countries. It affects up to 130 million people (1). Increasing migration means that scabies has once again become a more common suspected or confirmed diagnosis in Germany too, at physician practices and emergency departments. Scabies patients’ main symptom is excruciating pruritus, which is usually particularly severe at night (2).

Scabies is transmitted by the female scabies mite, which burrows into the top layer of the epidermis to lay eggs, before dying 30 to 60 days later. After approximately 2 to 3 weeks, sexually mature mites hatch from the eggs (3). This period is important for treatment with substances that are not ovicidal and are not sufficiently stored in the skin. Mites can survive for only approximately 2 days outside the body (4).

In common scabies, the scabies mite is transmitted during sufficiently long-lasting skin-to-skin contact—at least 10 minutes (4). In contrast, for crusted scabies, with millions of mites on the skin, short contact with patients and contaminated materials is sufficient.

If infestation occurs, the first papules appear within 2 to 5 weeks. These are tunnel-shaped or comma-shaped and range in length from a few millimeters to 1 cm. They occur in typical locations where the outer layer of skin is thin, such as the interdigital folds, the areola, the navel region, and, in men, particularly the shaft of the penis. An eczematous reaction with disseminated, mite-free erythematous papules or papular vesicles, causing the characteristic severe pruritus, is a sign of a cell-mediated immune response.

Scratching, encrustation, and possible impetiginization lead to a varied morphological picture over a matter of weeks. This can vary a great deal in severity and can lead to bacterial infections. A further sign of scabies is itching in contact persons. Diagnosis is confirmed using microscopic evidence of mites, eggs, or feces from skin scrapings or on the basis of evidence of mites obtained by dermatoscope (5).

There is an increased risk of outbreaks in facilities in which large numbers of people live in close contact with each other. Care homes for the elderly are particularly affected because older people with multiple morbidities develop crusted scabies more easily as a result of drug-induced or age-related immunosuppression and because care for residents entails more frequent, longer contact.

During major migrations such as are currently being seen, the prevalence of scabies in those seeking refuge is somewhat higher than in the general German population. The risk of outbreaks is low, however, as those affected are immunocompetent, and ordinary contact with other members of the population is insufficient for transmission.

As no immunity develops to scabies, reinfestations are common unless all relevant contact persons, e.g. life partners and relatives, also receive appropriate treatment. In contrast, resistance to the antiscabies drugs detailed below has not yet been described in Germany and is rarely described elsewhere (6).

The current common treatment options in Germany are permethrin 5% topical, benzyl benzoate 10%/25% topical, and crotamiton 5%/10% topical with ivermectin systemic (7). The latter was authorized in Germany and launched on the market in spring 2016 (8). It is easier to use and had already been recommended in the German guideline for crusted scabies and other conditions as early as 2006 (9). Unlike topical treatments with permethrin, for example, it is not ovicidal. However, it accumulates in the epidermis.

This review summarizes the available data on the efficacy of common antiscabies drugs.

A systematic review of the literature was performed to evaluate the available evidence comparing the efficacy and safety of various antiscabies drugs. The review was performed according to the Cochrane Method (10).

The review included randomized controlled trials in scabies patients. Trials in which whole populations with a high prevalence of scabies received therapeutic and/or preventive treatment were also included.

Two authors (CD, SR) independently screened all identified titles and abstracts for compliance with the inclusions/exclusion criteria. The fulltexts of the selected publications were then evaluated on the basis of the same criteria. Using a standard evaluation sheet (MS Excel 2013), data was extracted by one author (CD) and verified by a second (SR). Differences in opinion were resolved through discussion with the third author (RNW). (Figure). 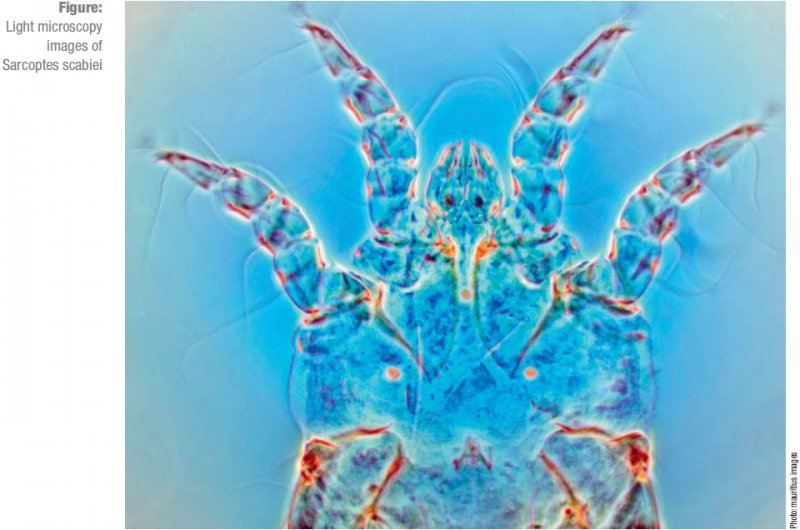 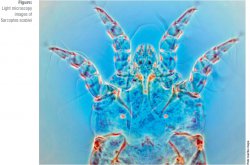 The data extracted was analyzed using Review Manager (11). For binary variables, relative risk (RR) with a selected confidence interval of 95% (95% CI) was calculated as a measure of treatment effect. Calculation in Review Manager is based on the Mantel–Haenszel (M–H) method.

The risk of bias was evaluated using the Cochrane Risk of Bias (RoB) Assessment Tool (10). The potential risk of overestimating the effect found in each trial was included in the Discussion.

The literature search performed on 24 November, 2015 yielded 578 hits. 178 duplicates were removed, 400 titles/abstracts were viewed, and 57 fulltexts were examined for compliance with the inclusion and exclusion criteria. A list of the 35 excluded trials, including the reasons for exclusion and references, is provided in eTable 2. The search was last updated on 24 June, 2016 (autoalerts), when a further 32 trials were identified.

Sixteen publications were included in the review (eTable 3). These reported 6 comparisons of different substances, or different frequencies of administration, or different formulations.

eTable 3
Characteristics of the 16 included RCTs
Enlarge All figures

An additional 8 trials were also identified. These met the inclusion criteria but are reported separately, as their validity is questionable (eTable 4).

A detailed description of the study results, including findings on safety, as well as selected forest plots can be found in the eMethods section, showing the results of all studies included.

Due to the statistical heterogeneity (I2 greater than 80%) and clinical heterogeneity meant it was only possible to pool the results once. The studies differ from each other in terms of their design, frequency of treatment, and/or in their definition of the outcome parameters (eTable 3).

The following conclusions can be drawn from the comparison of different topical treatments: after 2 weeks a single dose of permethrin was found to be of comparable efficacy to crotamiton, but after 4 weeks, it was superior to crotamiton (12). When administered twice, neither drug was superior after 4 weeks (13).

In comparison of topical ivermectin and topical permethrin, neither was found to be superior.

Studies describing 3 comparisons of topical and systemic therapies were also included. A total of 6 trials reported findings after 2 and/or 4 weeks on the efficacy of topical permethrin versus systemic ivermectin. Efficacy was comparable, although the trials differed in terms of their outcome parameter and other factors. Frequency of repeat treatment was inadequately reported.

Topical ivermectin was also found to be of comparable efficacy to systemic ivermectin, but only one trial investigating this could be included.

Evaluation of risk of bias

The risk of bias was rated as “unclear” in 14 trials and “low” in 2 trials (12, 20) (eFigure). The authors’ confidence in the findings of the selected trials is therefore similar for all comparisons.

eFigure 2
Efficacy of single-dose permethrin 5% (PER) vs. single-dose ivermectin 0.2 mg/kg (IVER) after 2 weeks
Enlarge All figures

eFigure 3
Efficacy of single-dose permethrin 5% (PER) vs. 1 or 2 doses of ivermectin (IVER) 0.2 mg/kg after 4 weeks
Enlarge All figures

eFigure
Risk of bias for each included trial
Enlarge All figures

Publication bias cannot be ruled out, as no search was performed to locate unpublished or unregistered trials. No experts were asked about this.

The 16 included trials found little difference in terms of efficacy or tolerability. Crotamiton and permethrin were found to be of similar efficacy, as were topical permethrin and systemic ivermectin. Despite the lack of ovicidal effect of single-dose ivermectin, in most trials efficacy after 2 weeks was comparable to that of single-dose topical ovicidal drugs such as permethrin.

However, there were considerable differences between the included trials in terms of treatment frequency and the definition of the outcome parameters. The comparison of benzyl benzoate and ivermectin, for example, yielded varying findings; this makes it impossible to draw a firm conclusion.

It should be critically noted that one article published in Russian was not included for reasons of cost. This trial and the 8 trials with questionable validity would probably have had no effect, or only a negligible effect, on the overall findings of this review.

In certain conditions repeat treatment should be recommended to ensure that treatment is effective, in order to interrupt a potential chain of infection. Repeat treatment is particularly recommended in cases of crusted scabies, severe scabies with many papules caused by burrows, immunosuppressed patients, doubt as to whether initial treatment was consistently followed, and scabies outbreaks in care homes and situations in which multiple individuals are affected (5).

When large populations with a high prevalence of scabies are treated, systemic ivermectin seems to be superior to topical treatments (26). When large patient groups are treated, the issue of practicability is also significant. Single oral administration of tablets is considerably simpler than professional applications of cream over the whole body. This is also significant in view of the increased risk of reinfestation in residences where space is limited and there is physical contact between individuals.

Treatment of contact persons is important to long-term treatment success (2, 5). The guideline recommends that, as a rule, contact persons such as those in the affected individual’s family or household should also be treated.

The German guideline recommends permethrin for common scabies (5), as it is applied locally and usually only needs to be used once. Based on our findings, no preference can be determined for permethrin or crotamiton in terms of efficacy—crotamiton is a potential alternative, according to our analysis. The guideline recommends it as a pragmatic option for second-line treatment of infants, pregnant women, and breastfeeding women (5). There are no trials in these patient groups. The German guideline recommends that children return to school and adults to work after initial treatment is completed.

Follow-up examinations checking for new-onset efflorescences suggesting scabies should be performed 2 weeks and at least 4 to 6 weeks after treatment (end of mite cycle). Furthermore, treatment should be repeated if there are still signs of active infestation, such as new papules caused by burrows or microscopic or dermatoscopic evidence of live scabies mites, 14 days (or more) after treatment.

eFigure
Risk of bias for each included trial
Enlarge All figures

eFigure 2
Efficacy of single-dose permethrin 5% (PER) vs. single-dose ivermectin 0.2 mg/kg (IVER) after 2 weeks
Enlarge All figures

eFigure 3
Efficacy of single-dose permethrin 5% (PER) vs. 1 or 2 doses of ivermectin (IVER) 0.2 mg/kg after 4 weeks
Enlarge All figures

eTable 3
Characteristics of the 16 included RCTs
Enlarge All figures 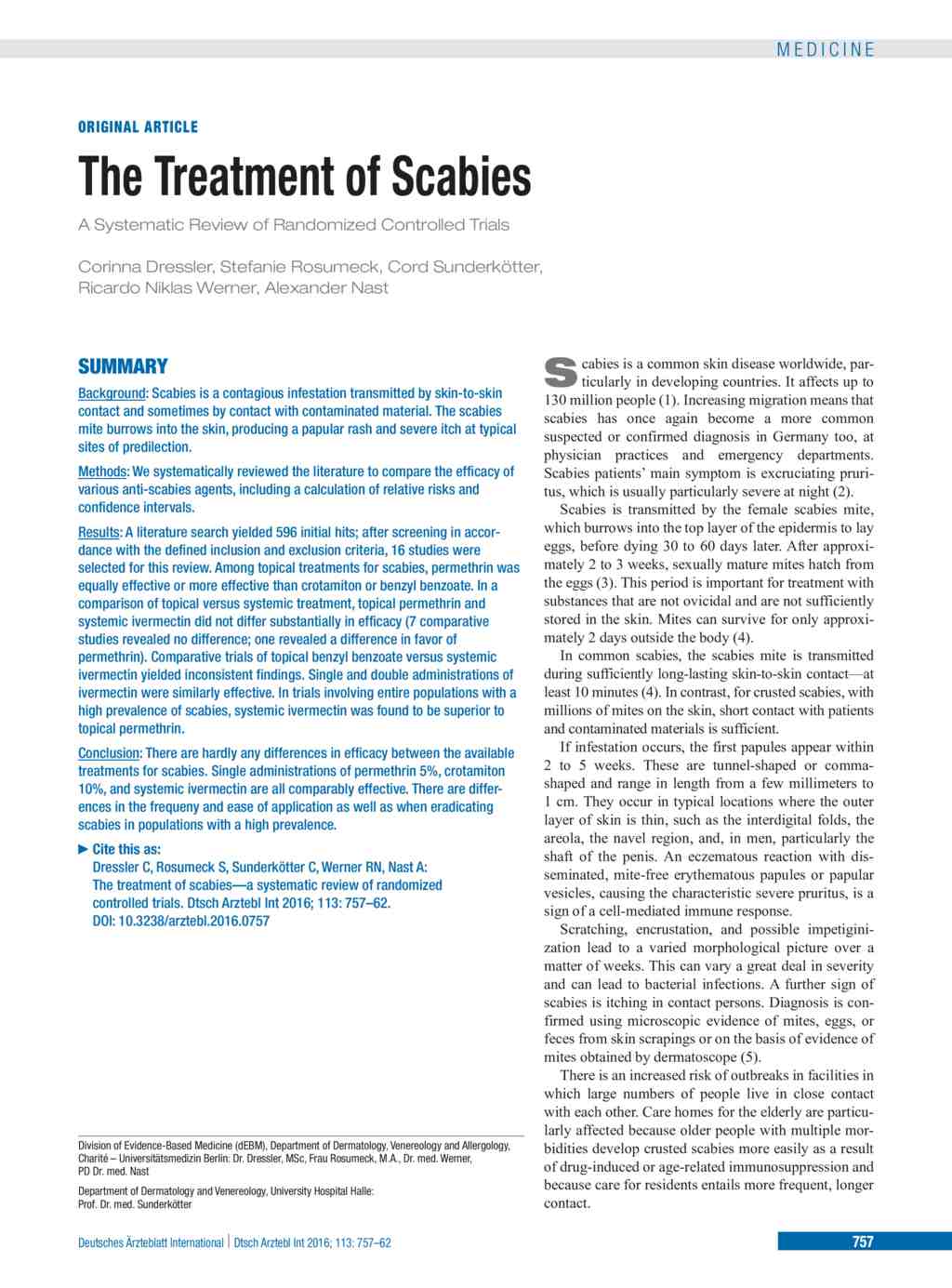