The Impact of GP-Centered Healthcare

A Case–Control Study Based on Insurance Claims Data

Background: In Germany, enhanced primary care (‘GP-centered health care’) is being promoted in order to strengthen the role of GPs and improve the quality of primary care. The aim of this study was to evaluate the impact of a GP-centered healthcare program, established in 2011 in the German federal state of Thuringia, on healthcare costs, care coordination, and pharmacotherapy.

Methods: We conducted a retrospective case–control study based on insurance claims data. Participants were followed from 18 months before the start of the program to 18 months after its introduction. The intervention and control groups were matched via propensity scores.

Conclusion: The study indicates that the GP-centered healthcare program does not lead to lower direct health care costs. However, it may lead to more intense and better coordinated healthcare in older, chronically ill patients with multiple conditions. Further studies are needed on long-term effects and clinical endpoints.

About 10 years ago, a comprehensive review of the literature showed that primary care–orientated health care systems provide better quality of care and higher cost-effectiveness (1, 2). Since then, many policies and programs have been applied to strengthen primary care across the world. Examples include new payment schemes for general practitioners (GPs), medical homes, and collaborative care (3–5). In Germany, enhanced primary care programs started in 2004 with the creation of a legal framework to support ‘GP-centered health care’ (6). These programs viewed primary care as an important element of community-based care that takes particular account of the growing number of the chronically sick (7–9). The success factors of enhanced primary care programs have recently been well described by Bodenheimer et al. (10), and include committed leadership, data-driven improvement, team-based care, continuity of care, prompt access to care, comprehensiveness, and care coordination.

While respecting the general principle of allowing patients to choose their physicians, statutory health insurance (SHI) funds were encouraged (since 2004) and since 2007 obliged to offer contracts to GPs aimed at offering financial incentives to enhance primary care. Patients benefit from the program by choosing one specific GP whom they were obliged to consult before seeing a specialist. More than 75 of such programs now exist in Germany, and more than 16 000 GPs and 3.7 million patients participate in them (11). A major SHI—AOK PLUS, which covers 41% of the population in central Germany—established a GP-centered healthcare program in 2011 in the German federal state of Thuringia. This study aims to evaluate the impact of this program on healthcare costs, care coordination, and pharmacotherapy.

Ethics approval was granted by the Local Ethics Committee of Jena University Hospital, approval No. 4058–04/14. The trial was prospectively registered with Current Controlled Trials: ISRCTN29418540. The design, performance, and report of the claims data analysis were based on the recommendations of the GPS (Good Practice Secondary Data Analysis) (12) and the STROBE (STrengthening the Reporting of OBservational studies in Epidemiology) recommendations (13).

Figure
Timeline for the evaluation study
Enlarge All figures

The control group (CG) of patients receiving usual care consisted of the same number of patients as the intervention group (IG) (40 298 patients in each group) and had been matched via propensity scores in order to correct for possible differences between the groups (cf. eBox 2 for matching variables).

eBox 2
Matching variables of cost and care utilization as well as morbidity, estimated for the 18–month baseline period (t1)
Enlarge All figures

The GP-centered healthcare program complements regular GP care (“add-on contract”). The elements of the program for participating GPs were:

The financial incentives were offered in addition to the regular payment system for GP care. The participating patients committed themselves to choose the contracted GP as a first-line contact to the health care service without being bound to the program by any financial or other incentives.

We examined the differences between intervention and control groups using a large number of process and effect measures based on health economic and clinical reasoning, former evaluations of complex outpatient interventions, as well as recommendations on measures for the quality of outpatient care (14). Total direct costs from a health insurance perspective were defined as the primary outcome of this study. Secondary outcomes included partial costs and resource utilization, care coordination, and pharmacotherapy.

The pharmacotherapy parameters analyzed were: the number of drug prescriptions per patient, the number of prescribed medications, and the proportion of patients taking more than 5 medications.

We compared cases and controls with regard to any differences in the outcome parameters between the baseline period before enrollment (t1) and the follow-up period (t2) using the difference-in-differences method.

For more details on our methods see eBox 1.

The 40 298 participants in the intervention group were substantially older than the 322 732 non-participants (64.8 vs. 56.9 years) in the group from which the control group was matched, and many more were elderly than young (left-skewed distribution: 25% over age 77; skew of –0.763). They were also less often male (40.9% vs. 45.4%), more morbid in terms of multiple conditions (measured using the morbidity weight applied in the morbidity-based risk adjustment scheme in Germany (1.903 vs. 1.348), and more often participated in DMPs, meaning they were also chronically ill. After matching, there was no significant difference in propensity scores between IG and CG. Table 1 shows the characteristics of participants in the GP-centered health care program in comparison to non-participants.

Contrary to the study hypothesis, the results do not suggest a reduction in total direct costs by the GP-centered healthcare program. Cost increases for GP and specialist care were observable, while savings were identifiable in drug costs. We noticed that more care was provided to the 40 298 patients participating in the program, who had a mean age of 65 years as well as multiple and probably chronic conditions. This is reflected in a greater number of GP consultations, more specialist consultations (probably caused by more frequently ordered laboratory diagnostics, ophthalmologic consultations, and a lesser decrease in the number of diagnostic imaging tests), more home visits, and more patients participating in DMPs.

We would have expected a lower number of emergency hospitalizations and at least no rise in the utilization of hospitals, but this was not shown in the results. This cannot be explained by the data available. Additional enrollments of patients in the intervention group in other structured care programs such as DMPs may explain some of the intensified activities in care provided in the intervention group. The higher number of medical check-ups in participants before (and after) program implementation presumably reflects a selection effect.

The stronger rise in the number of patients taking 5 or more different drugs in the IG was accompanied by equally rising numbers of prescriptions. As these observations do not point to an increase in multi-medication, they would rather appear to reflect medication switches.

The observed effects may mainly be attributed to financial incentives, which were provided to the GP practices from the start. This is particularly true for the morbidity-oriented lump-sums that were specifically directed to chronically ill patients with multiple conditions (the majority of patiens participating in the program) who stand to benefit in particular from continuous and coordinated healthcare. The bonuses for cost-efficient pharmacotherapy and the IT-tool for pharmacotherapy (where implemented) might have produced the savings in drug costs as well as the presumed medication switches. Besides, greater participation in clinical peer meetings (quality circles) may have had some impact. In these circles led by a trained moderator, participating GPs discuss therapies on the basis of real data and patient examples in order to capture concrete optimization potential.

In addition to the explicit elements of the program, however, other mechanisms may have supported the observed changes in care, ranging from improved patient adherence to closer monitoring of symptoms and improved medication planning resulting in recognition of a need for further diagnosis and therapy by the GP, as well as efforts to improve the cost-effectiveness of prescribing.

We also regard the low number of patients who consulted more than one GP among participants in the IG as an indication that acceptance of the GP as the principal care coordinator was high. The lower increase in the number of specialist consultations without referral in the IG suggests that the gate-keeping role of GPs for participating patients is more distinct than in usual care. The small effect may be attributed to the penalty of €10 that patients had to pay for each outpatient consultation without a referral; this policy was in force throughout the entire evaluation period and independent of the program. Altogether, care coordination was assessed using 8 outcome measures of which 4 improved, 3 showed no effect and 1 suggested a selection effect.

Despite appropriate propensity score matching, there may have been systematic differences that the chosen matching parameters did not address, such as physicians’ and patients’ motivation. We did not consider program costs (financial incentives paid to the GPs; payments the SHI received from the national risk adjustment scheme). In a simulation of the minimum and maximum lump sums paid to the participating GPs, we found a statistically non-significant rise in total direct costs of between €50 and €81 (mean difference). The study was based on claims data, which had been collected for non-scientific purposes; clinical as well as patient-reported data were lacking (15). Not all measures built on claims data (i.e. billed cases of treatment) are appropriate to exactly describe health care delivery. We assume, however, that this does not affect the comparison of both arms of the study.

International enhanced primary care approaches stress the importance of continuous and individualized care by family physicians in cooperation with non-medical health professionals (8). The continuity of the doctor–patient relationship, which is also fundamental to the concept of the medical home (16, 17) is thought to encourage positive outcomes. This aspect has also been strengthened by the GP-centered healthcare programs in Germany, of which the one in Thuringia is an example.

Comparisons with programs of similar aims but much more complexity, in which health plans adopt a blended payment methodology for physicians that includes a pay-for-performance program (18), are not sensible. Instead, a comparison with the medical home approach in Belgium that incorporates capitation payments as well as collaborative care elements, is more suitable. The authors discovered similar outcomes such as intensified care but no increase in costs (19, 20). They point out that the quality of care was particularly improved in specific populations, such as patients with diabetes, who were not explicitly in the focus of the program (20). It may therefore be interesting to shed light on the effects of the Thuringian program in patient groups with special needs in terms of intensified monitoring and better care coordination.

Our analysis is the first one in Germany to estimate the total direct cost effects of a GP-centered healthcare program. Another evaluation study from the SHI AOK Baden-Wuerttemberg (21, 22) that started in 2008 and for which data are available for 2010 and 2012, has produced the following main results: more GP-consultations, fewer specialist consultations without a referral, lower medication costs, less multi-medication (only 2010), lower hospitalization rates (only 2012). These results are different to ours with respect to hospitalization and multi-medication. However, comparability is restricted because of the longer duration and greater intervention intensity in Baden-Wuerttemberg, regional differences in sector-specific care capacities, as well as methodological differences in limiting selection bias (22).

The authors would like to thank the German Statutory Health Insurance Funds “AOK PLUS – Die Gesundheitskasse für Sachsen und Thüringen” for funding, the reviewers for their detailed assessment of the manuscript, and Dr. med. Florian Wolf for valuable notes.

Dr. Schulz and Prof. Gensichen are both general practitioners (GPs).

Figure
Timeline for the evaluation study
Enlarge All figures

eBox 2
Matching variables of cost and care utilization as well as morbidity, estimated for the 18–month baseline period (t1)
Enlarge All figures
The Impact of GP-Centered Healthcare 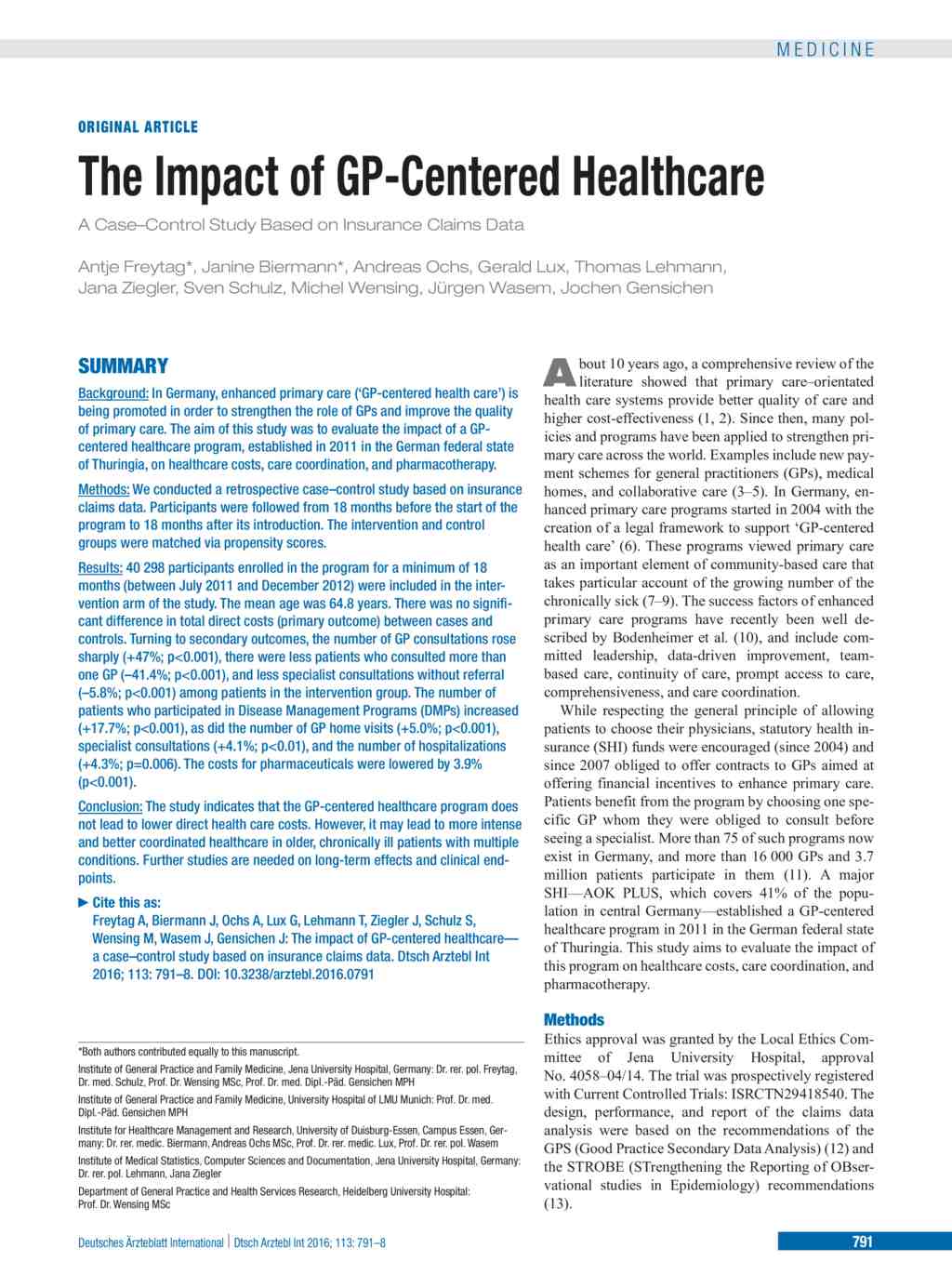