How Effective Are Care Plans in Primary Care?

The fundamental principles of general medicine are (1):

With this comprehensive approach, general medicine helps to ensure effective healthcare of the population. Correspondingly, well-defined primary care goes hand in hand with a better overall outcome for the individual patient and fairer distribution of resources in the healthcare system (1, 2).

General practitioners (GPs) are therefore the backbone of the healthcare system. However, the low remuneration for “talking medicine”, deliberation, and decision-making together with the patient stands in contrast to the vital function that GPs fulfil.

In the framework of GP-centered healthcare (Hausarztzentrierte Versorgung, HzV), inducements are provided to reinforce primary care. The goal is to redress the imbalance of remuneration in favor of the more technology-oriented disciplines of medicine. Simultaneously, however, greater demands are placed on GPs, because the HzV contracts are intended to be accompanied by further optimization of medical care. The HzV contract with the AOK PLUS health insurance provider in the German federal state of Thuringia is tailored to accomplish this aim. The intervention includes the following points:

Interpretation of the study

Freytag et al. (3) analyzed routinely collected data to evaluate the impact of the HzV program initiated by AOK PLUS in Thuringia in 2011 on healthcare costs, healthcare coordination, and pharmacotherapy. Medication costs were shown to be lower in the intervention group, but the costs of both GP and specialized care increased—as did the number of hospital admissions. Against the background of quality-oriented stipulations and financial inducements to encourage intensification of GP care, Freytag et al.’s (3) findings are hard to interpret, because ultimately their study had negative results. The authors conclude, somewhat helplessly: “This cannot be explained by the data available.”

Interpretation of the results may be assisted by looking at the conditions under which the study was carried out. In a total of 419 GP practices, the results of patients treated at HzV and non-HzV practices were compared. On one hand, it has to be asked to what extent HzV physicians—who after all have to implement the numerous requirements of the HzV contract—differ from non-HzV physicians. On the other hand, it would be interesting to find out whether it makes a difference how often and how intensively the GPs are confronted with their patients’ health problems, given that the rate of GP–patient contact was 47% higher in the intervention group. It is feasible that the more frequent contacts led to an increased rate of abnormal test results and other pathological findings and therefore to more referrals and hospital admissions.

This would fit the authors’ finding that the number of specialist consultations was largely attributable to the results of tests ordered by the GP. In this context, it would be particularly interesting to establish whether hard endpoints such as mortality and morbidity were influenced by the higher numbers of specialist consultations and laboratory tests. However, this cannot be ascertained on the basis of routinely collected data.

In interpreting the results, one must remember that this was a case–control study. To maximize comparability between the intervention and control groups, the authors used painstaking propensity-score matching—a high-quality method (4). Such matching can, however, only be performed for known, measured variables, and the groups may have differed in other significant ways. Randomized comparison would have avoided this problem but was not possible under the prevailing care conditions.

Comparison with other studies

Comparison with other studies carried out within the German healthcare system may aid interpretation of Freytag et al.’s findings. In an analysis of Bavarian data from the first quarter of 2011, my co-authors and I compared 1 229 372 patients who were referred to specialists by their GPs with a similarly high number of patients who consulted specialists on their own initiative (5). We found that coordination of care is cost efficient—all the more so in older patients and in those with greater psychological comorbidity. Costs are interpreted as a surrogate for the frequency and extensiveness of medical procedures. One advantage of our study was that it was not tied to an intervention; also, HzV was not present at that time in Bavaria. It was therefore an observational study under natural conditions.

The studies from Baden–Wuerttemberg (6, 7) cited by Freytag et al. (3) showed distinct benefits of HzV with regard to hospitalization, medication costs, multimedication, and referrals. However, these studies were carried out over a longer observation period, and the higher intensity of intervention is advanced as an argument for the greater impact of HzV in Baden–Wuerttemberg.

Analyses from both Germany (5–7) and other countries (2, 8) point to the great importance of the work of GPs in providing good medical care for the population as a whole. Ultimately, it seems that health outcomes are usually improved by intensification of primary care—this is also indicated by differential results of the HzV study in Thuringia (3).

Any further analyses that may be carried out should investigate whether certain aspects of the implementation of HzV in Thuringia could be dysfunctional. It would also be important to design future studies in such a way that the various elements of such complex interventions can be examined and compared (9). Furthermore, the observation period should be extended to enable long-term investigation of the impact of HzV on truly patient-relevant parameters such as morbidity and mortality. 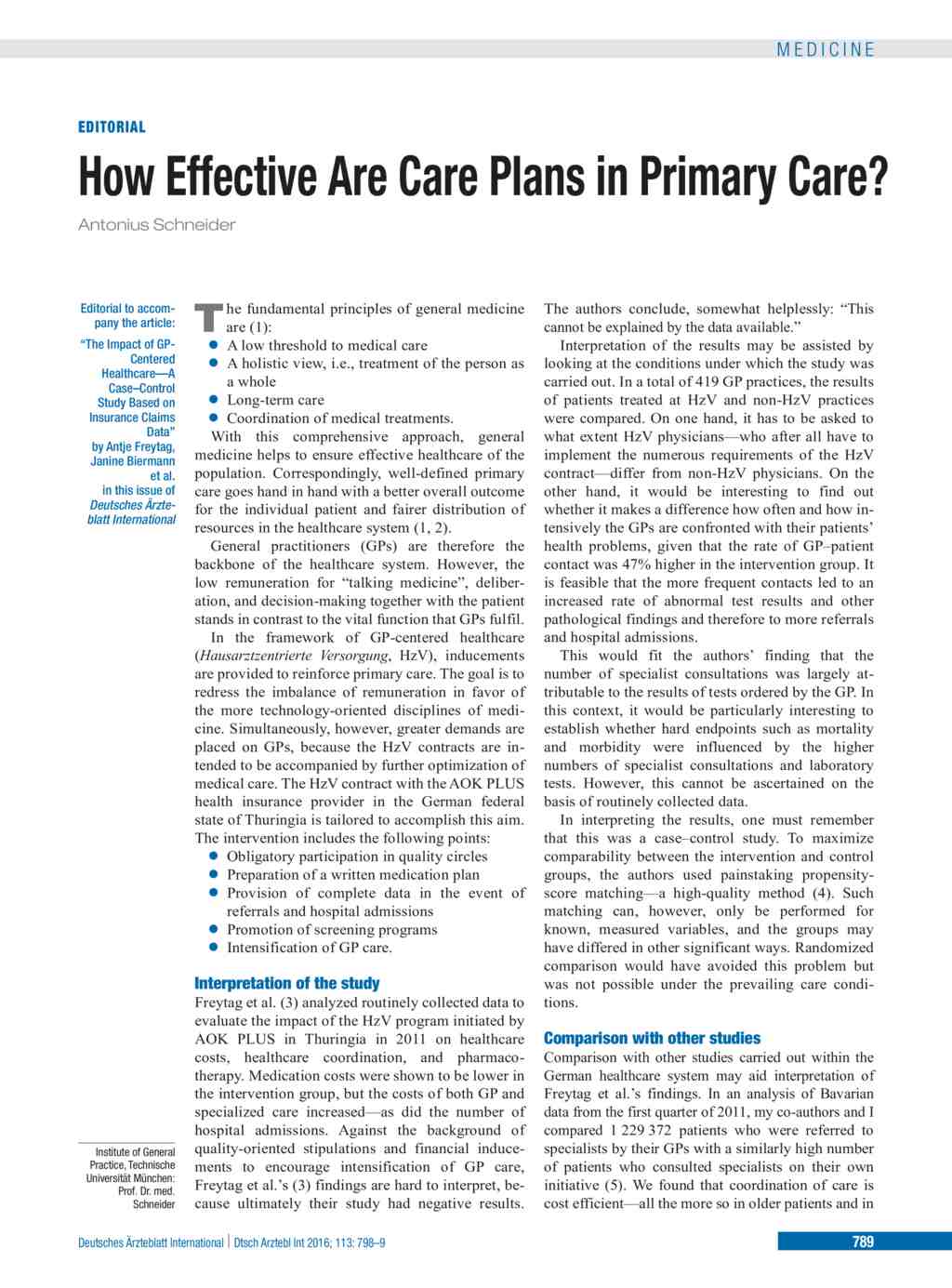