Background: Hypertension is a key risk factor. However, population data based on blood pressure measurements in Germany are scarce.

Methods: Standardized blood pressure (BP) measurements and medication data from seven population-based studies conducted in Germany between 1994 and 2012 (66 845 participants, 25–74 years) were analyzed: the EPIC-Potsdam study (1994–1998, EPIC), the KORA-S4 Study (1999–2001) in Augsburg, and the Gutenberg Health Study (2007–2012, GHS) in Mainz/Mainz-Bingen provided data for descriptive comparisons. Time trends were analyzed based on identical study regions for the German National Health Interview and Examination Survey 1998 (BGS98) and the German Health Examination Survey for Adults (2008–11, DEGS1) as well as the Study of Health in Pomerania (SHIP) in Northeast Germany (1997–2001) and the SHIP-TREND study (2008–2012). BP data were adjusted for study-specific measurement devices based on calibration studies.

Results: After adjustment for study-specific measurement devices, mean systolic and diastolic BP values were lower and treatment proportions higher in recent (2007–2012) compared to older (1994–2001) studies. Mean BP decrease was most pronounced (systolic ≥ 10 mmHg) in the elderly (55–74 years). The regional SHIP-TREND data for Northeast Germany showed a decrease in mean systolic BP in young men aged 25 to 34 years; on a national level according to the DEGS1 data, however, no such decrease was observed for this group.
Conclusion: New data add evidence for lower BP in Germany. However, the prevention potential remains high. Future research based on population-based data should place a special focus on blood pressure data in young men.

Hypertension is a major risk factor for cardiovascular and renal disease (1), is highly prevalent (2) and can be both prevented and treated (3). Blood pressure (BP) has been named by the WHO the number one risk factor for population health worldwide. However, studies with standardized BP measurements of unselected adults in Germany are scarce and have been compared only rarely (4–6). Therefore, researchers at different partner sites the German Center for Cardiovascular Research have established a consortium for blood pressure epidemiology in Germany. The first project of this consortium was to analyze population BP data from the last two decades in Germany. Seven large population-based studies have been gathered so far including the recent Gutenberg Health Study and the SHIP-TREND study which have not published their BP data yet, in order to verify the recently reported decreasing blood pressure trend in Germany (5). Moreover, this article presents for the first time BP data from regional studies adjusted for measurement device differences making them directly comparable with BP data from the national health examination surveys.

Population-based studies included in the analysis

All studies are based on samples of adults living in private households and recruited from population registers. Study design, study populations and BP measurement methods are summarized in eTable 1.

BP measurement protocols fulfilled identical criteria for positioning and resting time in all studies (eTable 1) but there were differences in cuff bladder sizes, cuff selection rules and BP measurement devices which have been taken into account by means of two calibration studies that yielded calibration formulas (see eBox for details) (11, 12).

eBox
Details on our Method
Enlarge All figures

Descriptive analyses were performed within the age range 25 to 74 years in 10-year age groups. Not all studies covered all age groups. Differences were tested using survey procedures to take into account the complex sampling design where appropriate and statistical significance was assumed at p<0.05. Additional details on data the study design, measurements, weighting and statistical methods can be found in the eBox.

The most pronounced decrease of mean BP (systolic ≥ 10 mmHg) occurred in the elderly (55–74 years) both according to national data and to SHIP data from the Northeast (Figure 3, eTables 2, 3). As an exception, SBP did not decrease in younger men aged 25–34 years according to national data, although it did according to SHIP-TREND data. Decreasing BP is additionally illustrated in the supplementary material by showing the shifts in BP distributions (eFigure 2) towards lower BP values in the entire SBP and DBP range and by markedly lower prevalence of hypertensive BP values (≥140/90 mmHg) (eTable 4).

Treatment among those with hypertension increased markedly in both men and women of all age groups (Figure 4), the relative increases ranging—depending on the age groups—from more than 20% to doubling in Germany as a whole, and even tripling of the treatment proportions in the Northeast. When looking at all seven studies, proportions of treated hypertensive patients were higher in more recent (2007–2012) compared to older studies (1994–2001) (eTable 5). The treatment proportion was lower in younger hypertensives as compared to older age groups.

Additional indicators of BP management including awareness and BP control are presented in eTables 6–9. Among the three more recent studies, SHIP-TREND showed consistently the highest estimates for all hypertension management indicators while DEGS1 and GHS had lower estimates.

This study presents for the first time a comprehensive overview on population-based BP data in Germany for the last two decades, including recent unpublished data from the SHIP-TREND and GHS studies. In addition, data from regional studies in Germany were made for the first time directly comparable to national data by taking measurement device differences into account.

Germany appeared to have a particularly high BP level and a rather unfavorable BP management in 1998 as suggested by an international comparison of developed countries (13, 14). However, the new threshold of 140/90 mmHg for the definition of hypertension (previously 160/90 mmHg) (15) may have been only partly implemented at that time. For the next decade, there was basically no new population data on blood pressure, which could confirm the likely BP decrease given the strong decline in stroke mortality in Germany (from 83 deaths per 100 000 in 2000 to 51 deaths per 100 000 in 2010) (17), stroke being the clinical outcome most closely correlated with high BP (1). It was only with the next national health examination survey, DEGS1, conducted a decade later, that a BP decrease in Germany was reported (5). The SHIP-TREND data from Northeast Germany presented in this paper confirm the decreasing BP trend for the first time in a regional study. This BP decrease occurred despite of increasing obesity levels in the region (17) and could be observed also in young men in contrast to national data from DEGS1 which show no decrease of BP in young men.

As a third source of recent cross-sectional data on BP in Germany, GHS showed a similar BP level to DEGS1 and SHIP-TREND but has no data on young adults. For older adults the trend towards lower BP was observed in a follow-up examination of another cohort study in Germany (18). Of note, such cohort data can be biased as a result of participant selection during follow-up and due to an intervention effect of the study itself, which can occur when participants are told that their BP was high and that control measurements or maybe even treatment may be warranted.

Increased treatment rates, consistently observed in the more recent studies, suggest that treatment played a considerable role for the decreased BP level in Germany. Of note, low awareness and treatment rates in the older studies may be partly linked to guideline changes (15). At the national level, awareness, treatment and BP control in Germany 2008–2011 for adults aged 18 to 79 years, were 82%, 72%, and 51%, respectively (5). When comparing these data to a recent study on BP management in the USA, Canada, and England (19), awareness in Germany compares quite favorably (USA 81% in 2007–2010, Canada 83% in 2007–2009, and England 65% in 2006). The treatment proportion of 72% in Germany is quite similar to the 74% reported by the above study for the USA, not quite as good as the 80% reported for Canada but better than the 51% for England (5). For BP control, a similar ranking is suggested (Germany 51%, USA 53%, Canada 66%, England 27%). These comparisons are based on reported national findings for roughly similar age ranges and time periods, but there are methodological differences.

Some interesting observations regarding regional and gender differences in BP distribution and management in Germany emerged from this analysis. In the past it appeared that BP values were lower in former East compared to West Germany (4, 20). However, the recent BP data from an East-German (SHIP-TREND) and a West-German region (GHS) suggest increasing convergence. This is in line with a previously published DEGS1 analysis of Germany which found the most pronounced BP gradient between the two East-German regions (21). Both analyses show for the Northeast a decrease in mean BP and a marked increase in treatment, while the hypertension prevalence (which is not influenced by treatment since it includes both uncontrolled and controlled hypertension) has changed much less. Therefore, regional comparisons that are not based on measurements but on hypertension diagnoses including controlled hypertension may still show a general East-West gradient (22). Regarding gender differences, our study confirms findings from many previous studies about higher hypertension awareness, treatment, and BP control in women (19). More detailed analyses of data from the German national survey (a comparison of BGS98 and DEGS1) (23) previously have shown a persistent gender gap, i.e. men with lower awareness of hypertension, treatment for hypertension, treatment among those aware of their hypertension, and control of hypertension in Germany 1998 and 2008–2011.

Although BP measurement is considered to be one of the easiest and cheapest tests in clinical practice, valid data on BP in whole populations are expensive to obtain and therefore scarce. The challenge lies both in the measurements, which are highly sensitive to bias from insufficient standardization (24), and in the study population which may be selective, i.e. when only primary care patients or long-standing cohort participants are included.

This analysis is a first step towards a more comprehensive analysis of BP data across different population-based studies in Germany. The studies included have in common that they are based on a strictly standardized and validated BP measurement methodology (summarized in [11, 25]) and that they have a cross-sectional population sample and can thus be generalized, within certain limits given by participant response and selection, to Germany or a specific region in Germany. In addition, this comparison overcomes for the first time the restriction that national and regional data on BP in Germany are based on measurements with different devices. By means of two validation studies conducted earlier we were able to adjust for differences between devices (11, 12). Of note, mean differences between validated devices are within only a few mmHg but are a concern for epidemiological analyses of whole populations since they can lead to relevant prevalence differences with high public health relevance (26).

It is a limitation that some of the studies had cross-sectional data only from one time period, meaning that time trend analyses were not possible for all studies. Generally, BP measurements were taken on one day only (although the second and third measurements were taken and averaged) as opposed to clinical practice where diagnosis of hypertension is based on measurements on different days. As a further limitation, epidemiological studies often do not include the most ill or disabled subgroups of the population, which are likely to have higher than average BP values. However, these limitations apply in both time periods and all regions. Therefore, they do not compromise our conclusion that BP levels in Germany declined, while the preventive potential for hypertension remains high.

In summary, this study provides evidence of declining BP levels and improved treatment of hypertension in Germany. Although not analyzed in this paper, it is likely that increased treatment and in addition also ongoing measures of prevention including promotion of healthy diets, physically active life styles, and smoking prevention had an effect on BP.

Although the disease burden is decreasing, the potential for preventing high BP remains high and mandates further efforts with respect to prevention and improved treatment. The key role of BP for morbidity and mortality stands in contrast to scarce population data. Further population research is needed with a special focus on gender-specific and age-specific aspects.

The authors declare that no conflict of interests exist.

eBox
Details on our Method
Enlarge All figures 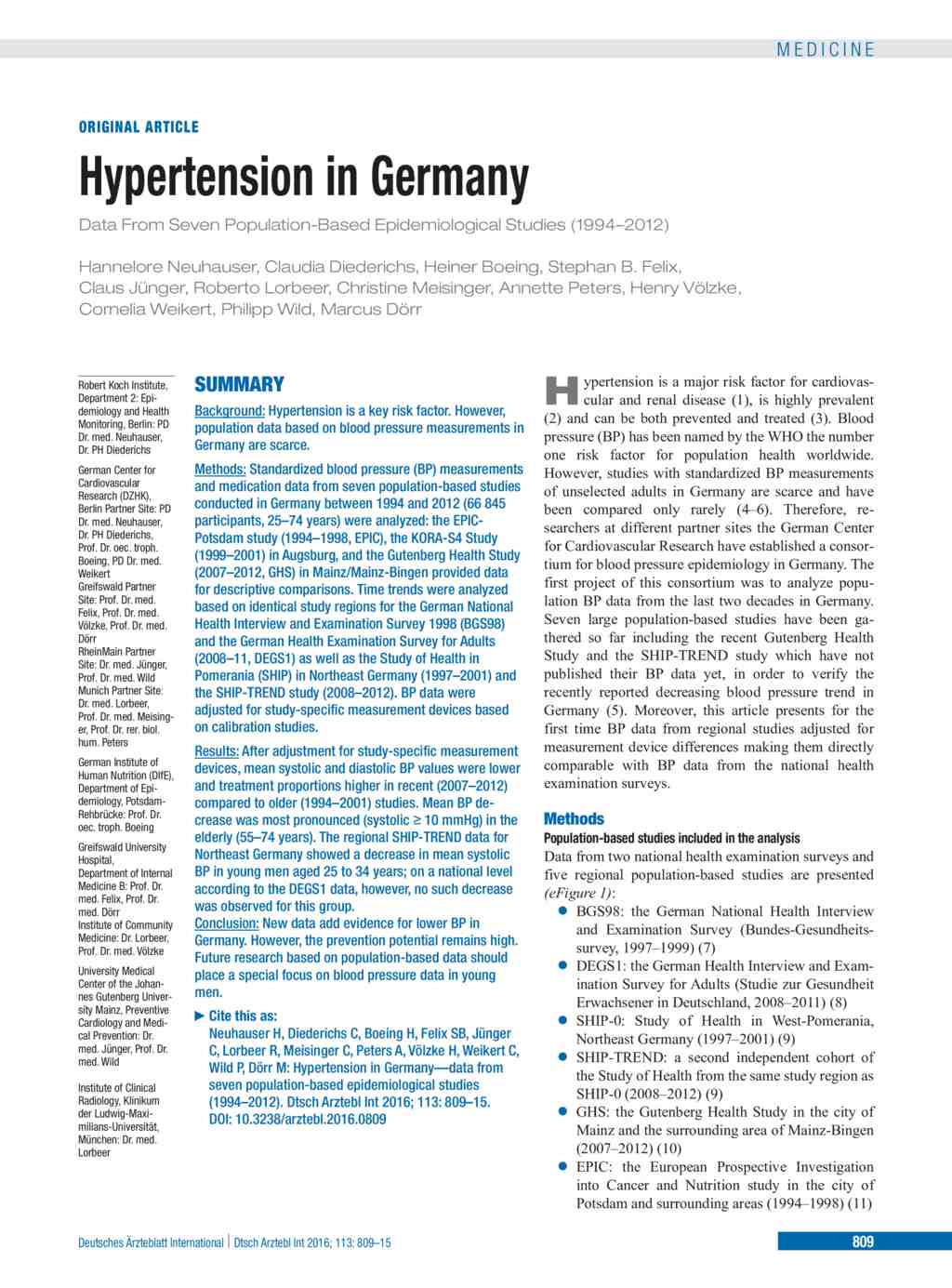