The Use of E-Cigarettes

A Population-Based Cross-Sectional Survey of 4002 Individuals in 2016

Background: Electronic cigarettes (e-cigarettes) are a consumer product whose benefits and risks are currently debated. Advocates of the “tobacco harm reduction” strategy emphasize their potential as an aid to smoking cessation, while advocates of the precautionary principle emphasize their risks instead. There have been only a few studies to date on the prevalence of e-cigarette use in Germany.

Methods: In May 2016, in collaboration with Forsa, an opinion research firm, we carried out a survey among 4002 randomly chosen persons aged 14 and older, asking them about their consumption of e-cigarettes with and without nicotine, reasons for using e-cigarettes, plans for future use, estimation of danger compared to that of tobacco products, smoking behavior, and sociodemographic features.

Results: 1.4% of the respondents used e-cigarettes regularly, and a further 2.2% had used them regularly in the past. 11.8% had at least tried them, including 32.7% of smokers and 2.3% of persons who had never smoked. 24.5% of ex-smokers who had quit smoking after 2010 had used e-cigarettes at least once. 20.7% of the respondents considered electronic cigarettes less dangerous than conventional cigarettes, 46.3% equally dangerous, and 16.1% more dangerous. An extrapolation of these data to the general population suggests that about one million persons in Germany use e-cigarettes regularly and another 1.55 million have done so in the past.

Conclusion: The consumption of electronic cigarettes in Germany is not very widespread, but it is not negligible either. Nearly 1 in 8 Germans has tried e-cigarettes at least once. Regular consumers of e-cigarettes are almost exclusively smokers and ex-smokers.

Electronic cigarettes (e-cigarettes) are devices that convert liquids into inhalable vapor via a heating coil. They are available in various forms, all of which have a liquid reservoir, an energy source, a mouthpiece, and an electronic circuit to vaporize the liquid (1, 2). E-cigarettes are used for recreational purposes or as a tobacco and nicotine cessation aid. The liquids vaporized usually contain nicotine and can also contain a variety of aromas. In contrast to other possible ways of nicotine intake, such as patches or chewing gum, e-cigarettes mimic the smoking ritual.

Although already patented in the 1960s (3), e-cigarettes were not available as a product until their introduction on the Chinese market in 2004 (4). They have been widely available in Europe and Germany since 2010. Since then, the use of e-cigarettes has become a visible phenomenon in the Western world, with considerable differences in use between individual countries (eTable 1). In several countries, new legislations are currently underway to regulate e-cigarette use (10, 11).

Over the past few years, a lively debate about the use of e-cigarettes has developed among physicians and health scientists. This debate involves three main questions:

Along the lines of these questions, two juxtaposing public health positions are currently being discussed: the potential benefits of e-cigarettes are emphasized by supporters of the so-called tobacco harm reduction, while their potential risks are emphasized by advocates of the precautionary principle. The scientific discussion is made more difficult by the fact that these are normative positions, which hinders a dispassionate risk assessment. This has resulted in different countries assessing the potential benefits and risks associated with e-cigarette consumption differently. This is exemplified for instance by comparing the dominant positions taken in the UK and Germany (eTable 2).

The frequency of e-cigarette consumption has now been well investigated in various countries (28–30). However, only a few studies have addressed population-representative data on the prevalence and reasons for e-cigarette consumption in Germany (2, 5, 6). Moreover, these studies were either limited to a few key indicators, such as “used at least once” (6), or they could not determine any significant regular consumption (2). Our study examined the following parameters in a large sample:

After the authors developed the questionnaire (eFigure), data were collected by Forsa in May 2016. This market and opinion research firm is a member of the BVM (Bundesverband Deutscher Markt- und Sozialforscher, Association of German Market and Social Researchers) and the ADM (Arbeitskreis Deutscher Markt- und Sozialforschungsinstitute, Working Group of German Market and Social Research Firms).

Data were collected by computer-assisted telephone interviews according to the ADM telephone sampling system (31, 32). This is a multi-level systematic random sampling, in which calls are made to telephone numbers from all the possible telephone connections. If a telephone connection corresponded to the inclusion criteria (private residency, availability of selected person, knowledge of German), the potential participants were asked to participate in the survey. Both mobiles and landline network connections were contacted (33).

We aimed at interviewing 4000 individuals living in Germany, aged 14 years and over, by telephone. The following data were recorded:

The use of e-cigarettes clearly differed according to sex: 15% of men, and 8% of women, were ever users (Table 2). Blue collar workers showed a distinct above-average use. For school students, the proportion of have-tried and former users was above average, while the proportion of current users was low. Overall, there was a clear dependency on age, with the age group 20 to 39 years the most frequently represented.

Our survey shows that nearly every eighth resident of Germany has tried e-cigarettes. Compared to studies from the years 2014 and 2015, this is a considerable increase (between 50% and 100%) of the group of ever users (2, 5, 6) (eTable 1), although some of this increase could result from methodological differences between surveys. However, compared to the current results from the UK, regular e-cigarette use is rare in Germany (eTable 1). A Europe-wide study in 2014 concluded that Germany had a below-average number of users as compared to the rest of Europe (5). The lower number of users is probably due at least in part to the percentage of smokers who use e-cigarettes. For instance, we found that 32.7% of smokers in Germany have ever used e-cigarettes, which is in stark contrast to the finding that 64% of smokers in the UK have ever used e-cigarettes (7). In 2015, the ever use of e-cigarettes among tobacco smokers was 30% in Europe but 19% in Germany (5).

The results of our study provide limited initial information about the potential benefits of e-cigarettes as a smoking reduction or cessation aid, and their potential risk as an entry into tobacco use.

According to our investigation, e-cigarettes are used on a regular basis almost exclusively by smokers and ex-smokers. Almost half of the smokers who used e-cigarettes gave the reason for use as quitting tobacco and nicotine use, while a quarter of smokers see e-cigarettes as a complementary product to tobacco smoking. Among ex-smokers who quit in 2010 or later, between 100 000 and 350 000 persons regularly used e-cigarettes, and between 200 000 and 450 000 had used them in the past. The question then arises of whether these regular e-cigarette users gave up smoking with the help of e-cigarettes. Indeed, 75% of the current e-cigarette users (and 50% of all regular users) reported quitting smoking as the main reason for their e-cigarette use (Table 3). While this could indicate that e-cigarettes are relevant tobacco cessation aids, we cannot rule out that additional aids were used.

Additionally, our study is limited in the extent it can address whether or not e-cigarettes act as a gateway to smoking.

The results of the respondents’ assessments about the dangers of e-cigarettes were surprising. Only one-fifth of Germans believe that e-cigarettes are less dangerous than tobacco cigarettes. Using e-cigarettes rather than tobacco cigarettes clearly reduces the risk for disease, although the degree of risk reduction has not yet been scientifically determined (2, 12, 35–37). In the UK, the risk of e-cigarette consumption is perceived differently, with 73% of the total population stating that e-cigarettes are less dangerous (7). It is possible that the relatively low consumption in Germany is related to its suspected health risks. Only a small percentage of smokers in Germany can imagine trying out e-cigarettes in the future.

The present study examined the prevalence of e-cigarette consumption in Germany in a large, population-based sample. It was integrated into a multi-topic survey that was not focused on health issues, which perhaps evoked a more honest response than single-topic surveys. Also, for the first time, we have examined ex-smokers who had recently quit smoking (in 2010 or later) as an individual group.

As our study was cross-sectional, it cannot determine cause and effect. The survey also recorded past events, which presents the possibility for memory errors to be included. Indeed, a few implausible values ​​can be found in the study. For example, some people who referred to themselves as never smokers claimed to use e-cigarettes with the aim of quitting smoking (Table 3).

Telephone surveys of the entire population are subject to certain forms of selection error. Potentially poorer telephone availability among certain groups of people was taken into account by including a design weight. Indeed, our study was strengthened by the fact that our socio-demographic data correspond to that of the entire population, with the exception of the formal education levels and the information given for never smoking. With respect to formal education, these kind of surveys often have a typical selection error due to the fact that people with a higher educational degree are more likely to take part in surveys than those with a lower degree. However, a supplementary analysis in which education levels were weighted did not significantly change the resulting percentages (Table 1). The percentage of never smokers (34%) is significantly lower in our study than in the microcensus (56.2%). This difference is probably explained by our category of “have tried smoking”, which does not exist in the microcensus (38). No response rate could be determined in this study, as it was integrated into a rolling survey which, for technical reasons, had no defined start or end. Finally, it is possible that e-cigarette users have a different participation behavior than non-users, which could lead to a non-response bias.

With one million regular users in Germany, the consumption of e-cigarettes is gaining in relevance. Users are almost exclusively smokers or ex-smokers who quit smoking in 2010 or later. In order to clarify whether e-cigarettes are useful for smoking cessation, or whether they instead provide a gateway to smoking, longitudinal studies are necessary.

Funding
This study was funded by the institutional budget of the Institute of Medical Biostatistics, Epidemology, and Informatics of Universitätsmedizin Mainz 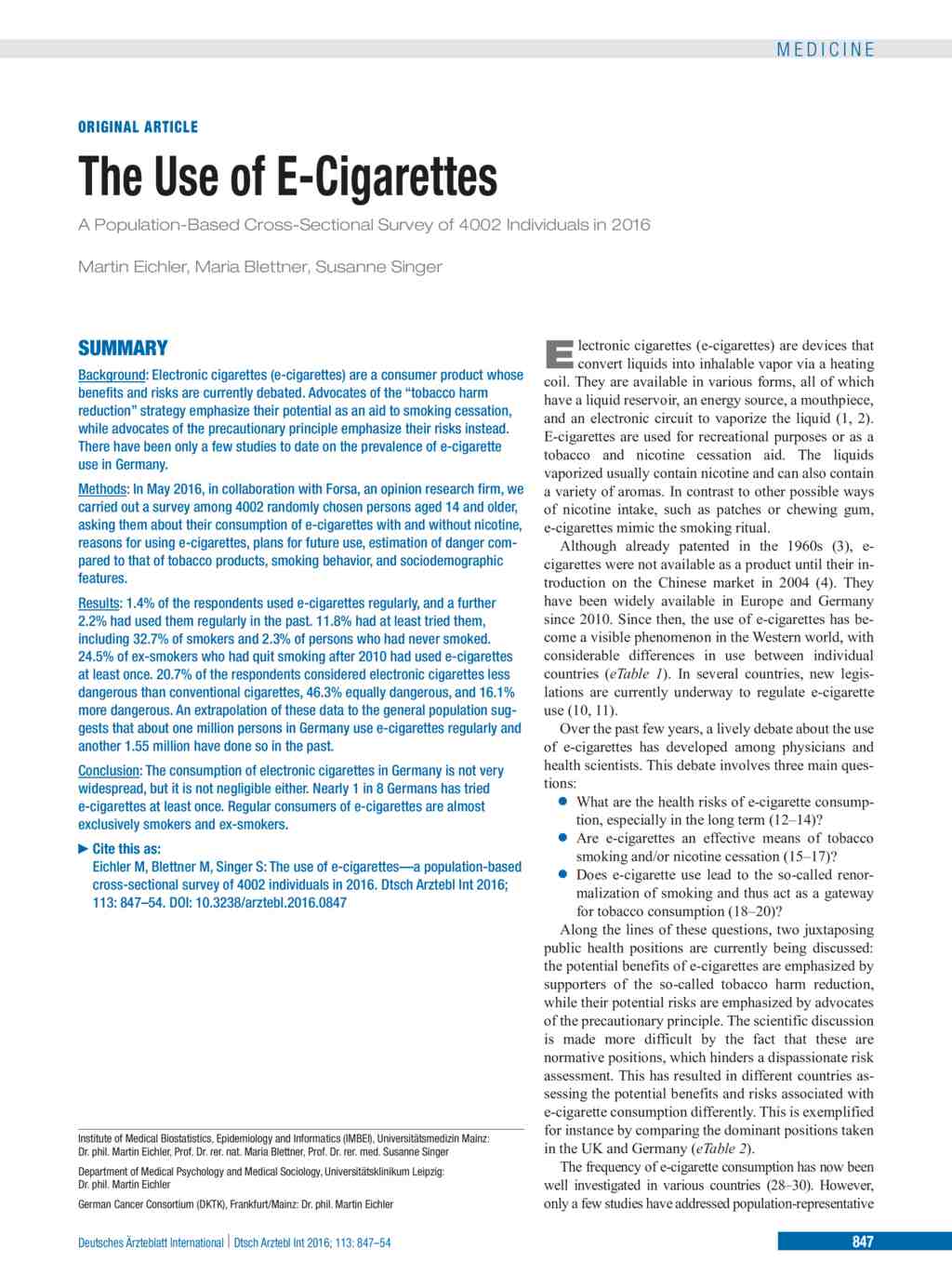