The Prevalence of Glaucoma in Young People

Background: Earlier information on the prevalence of glaucoma among children in Germany was based solely on estimates. Reported values for congenital glaucoma range from 1 in 10 000 to 1 in 68 000 depending on ethnic origin. The estimate for juvenile glaucoma is 1 in 44 000.

Methods: The Gutenberg Health Study is a population-based, prospective, monocentric cohort study with 15 010 participants aged 35 to 74. To determine the history-based prevalence of childhood glaucoma, participants were asked about the diagnosis of glaucoma, any operations for glaucoma that were performed, regular use of drugs for glaucoma, and the age of onset of glaucoma. The affected individuals were classified in four groups based on the age of onset: congenital (<2 years), juvenile (2 to <18 years), late juvenile (18 to <40 years), and early adult (40 to <45 years). In the identified glaucoma patients, the visual acuity, intraocular pressure, corneal thickness, visual fields, and optic discs were evaluated.

Conclusion: In our cohort, the history-based prevalence of juvenile glaucoma was 0.01% (2 patients). The prevalence was an order of magnitude higher (0.16%) between the ages of 18 and 40, and two orders of magnitude higher at later ages (1.98%). The burden of disease seems to be markedly higher than previously assumed.

Glaucoma in childhood is rare, and because of the long-term nature of the disorder, it necessitates frequent contact with doctors (1–5). Owing to the potential loss of visual functions, a child’s development may be impaired and everyday life hampered, leading to great individual suffering.

A distinction is made between primary and secondary forms of childhood glaucoma. Primary congenital glaucoma is either already present at birth or develops as juvenile primary open-angle glaucoma into early adulthood. Depending on the timing it manifests, high intraocular pressure will cause bulbar growth, corneal opacity owing to folds in Descemet’s membrane (Haab’s striae), and/or optic nerve and visual field damage. Secondary childhood glaucoma may also be present at birth or manifest into young adulthood; it goes hand in hand with morphological changes—such as aniridia, Axenfeld-Rieger syndrome (dysgenetic changes in the anterior chamber angle [6]), or Sturge-Weber syndrome (1).

In the literature, estimates of the rates of childhood glaucoma differ widely. Some studies report incidence rates depending on ethnicity between 1:10 000 and 1:68 000 (1, 3, 7). For congenital glaucoma in Caucasian white persons in the US, incidence rates of merely 1:260 000 (3) have been reported, and for black persons in Africa, rates of up to 0.4%, which corresponds to 1:250 (8–13). The rates of congenital glaucoma are higher, especially in regions where consanguinity is the norm (1). Because of the low incidence of childhood glaucoma and the external signs, which are not always obvious—such as buphthalmos or corneal opacity—the diagnosis is often made late. Direct and immediate access to therapy is not possible everywhere, and consequently treatment is administered at an advanced stage (1, 4, 14). Late surgical treatment is then successful only to a limited extent as far as saving visual function is concerned. This causes great individual suffering and high socioeconomic costs (15, 16).

It was therefore the aim of our study to estimate for the first time the prevalence of childhood glaucoma in Germany—on the basis of data from a large population-based study—in order to create a basis for questions of healthcare and the burden of disease, among others.

We investigated the history-based prevalence of glaucoma in the Gutenberg Health Study (GHS), a population-based, prospective, monocenter cohort study.

In total, 15 010 persons from the city of Mainz and the rural district Mainz-Bingen were investigated (22). For 14 700 (97.9%) of participants, ophthalmological data were available for evaluation.

At the initial examination in 2007–2012, the study participants underwent a five-hour examination program. Ophthalmological data were collected by means of an extensive oral history of eye disorders, glaucoma medication, glaucoma surgery, and a detailed eye examination, including intraocular pressure measurements (22) (eTable). A change in data over the past years is not to be expected because of the lack of exogenous factors of influence.

The following criteria were considered in order to define glaucoma: glaucoma was reported in the medical history and, additionally, at least one glaucoma operation had already been undertaken and/or glaucoma medication was applied.

According to these selected inclusion criteria (glaucoma diagnosis, surgery, or medication), participants were identified as glaucoma patients and categorized into four groups by age at diagnosis:

We identified 352 participants as glaucoma patients (weighted prevalence 2.02%, 95% confidence interval [1.79; 2.25]). Because the year of diagnosis was unavailable for some, 303 case patients were categorized into the different groups.

The sex distribution in all groups was even (Table 1).

Regarding the weighting according to the standard population of the Mainz/Bingen district, the following prevalence rates were found for glaucoma (Table 1):

Visual acuity in all three groups was very good (median 20/40 to 20/24). However, all groups also included patients with poor visual acuity of 20/100 (8 eyes), which correlated with advanced glaucoma (Table 2).

In the group of participants with juvenile glaucoma, corneal thickness was found to be increased, but this had no clinical relevance (Table 2).

Following the example of several authors (age 16 years old according to Childhood Glaucoma Research Network [CGRN], age 20 years old in the US literature), we decided to categorize our participants into four groups (Table 1) (26–28).

In the literature, prevalence or incidence rates are reported.

None of the 14 700 participants in our study had congenital glaucoma (age at onset <2 years). This is consistent with data from the literature, which report incidence rates of about 1:260 000 (US) and 1:357 000 (the UK). The prevalence in the UK is higher, but no data for the Caucasian white population are available (1, 3). It is the experience of glaucoma-specialized hospitals that in Germany, far more patients of a Caucasian white background undergo surgery. This means that the prevalence in Germany is likely to be higher. The incidence in the US if applied to Germany would translate into very few expected cases in a scenario of a live birth rate of 738 000/year (30).

It is possible that the population size of 14 700 participants is not large enough to identify affected persons in epidemiological cross-sectional studies. Furthermore, consanguinity and therefore the rate of genetically caused glaucoma was probably low in our study. Access to medical care in Germany is excellent, however, so that it would be possible to diagnose patients accordingly and hence, the captured prevalence would be high. Our study data were collected during a medical examination lasting several hours. For this reason, patients with congenital glaucoma might be under-represented as they might not have reacted to the invitation to join the study because of their often much poorer visual acuity (1, 31) and frequent necessary visits to the doctor; they may therefore be underrepresented in the study population. Furthermore, possibly healthy people do not perceive any benefit from a thorough examination. The prevalence rates may therefore be subject to selection bias. The response rate in the initial 5000 participants was 60.3% (32).

A certain recall bias will also need to be considered. If participants do not precisely remember the exact date of their diagnosis—for example, the 1st/2nd year of life or 17th/18th year of life—they may be allocated to a different group according to the defined thresholds. The medical history-based imprecision in terms of naming diseases was vastly reduced by the fact that in addition to the diagnosis of glaucoma, the use of medication and/or past surgery were mandatory items, including the exact name of the medical drug and the surgical procedure. Patients who were not able to contribute these data were not registered as glaucoma patients.

Broken down by individual groups, the prevalence of juvenile glaucoma was 0.01% in the GHS. This concerned 2 female participants whose glaucoma had been diagnosed at ages 10 and 7, but who had not undergone glaucoma surgery. The visual field examination showed smaller defects in one female patient, but according to our criteria these were not classed as abnormal. In another female participant, the optic nerve showed changes that were typical for glaucoma. By comparison, the incidence in the US population was 2.29:100 000 (0.002%) (3). No prevalence data are available.

Further comparison data of the prevalence in this age group in Caucasian white participants are not available in the literature, which means our study has made these available for the first time.

To date, studies investigated older population groups, mostly >50 years of age, in much smaller cohorts. The prevalence of glaucoma was studied, but the duration of the illness or the age at onset were not considered (17, 19–21, 33). For this reason, it was not possible to draw any conclusion about the rates of childhood glaucoma in Germany.

A special feature of our study is the fact that the focus was placed on the time of diagnosis of the disorder, which therefore allowed for a differentiated comment on the different groups of glaucoma.

Distinction needs to be made between history-based prevalence rates and prevalence rates after an examination had been undertaken. The GHS collected data on history-based prevalence. Participants were defined as glaucoma patients on the basis of their reported glaucoma diagnosis, surgery, and medication. By eliciting the exact medication history with details on glaucoma drugs and surgical procedures with their exact names, the validity of the data was improved and typical instances of confusion with, for example, cataracts were vastly avoided. These data from the medical histories were known to the investigators. However, it was not possible to avoid the inclusion of cases of ocular hypertension, although we identified only two participants by means of the optic disc and visual field results who had neither visual field nor optic disc abnormalities.

We assume that the actual prevalence is higher because, according to the literature, the rate of undiagnosed glaucoma cases, at least for open-angle glaucoma, in adulthood is 49–53% (18, 19, 21, 33, 34). In early childhood, glaucoma results in substantial functional impairment and glaucoma is diagnosed proportionally more often than in adults, albeit with a delay (35, 36).

In order to validate the data from the medical history, we correlated these with the parameters visual acuity, intraocular pressure, corneal thickness, visual field analysis, and papillary findings. Data on corneal diameter or axial length were lacking. However, we did not identify any congenital cases; the data were therefore assumed to be within the normal distribution in the population.

Intraocular pressure for all glaucoma patients was within the normal range and was therefore not used as an inclusion or exclusion criterion. Participants’ good intraocular pressure level may have been achieved by means of successful treatment of the patients, who were adults already (Figure 1 and 2) (38).

66% of participants with childhood glaucoma had papillary changes typical for glaucoma, which supports the allocation of these participants to this diagnostic group.

Visual field analysis showed very small or no defects in 73% of cases. This is an astonishingly high proportion. Participants had either been treated very early and very effectively, so that the visual fields remained normal, or the examination method is not suitable for the purpose of screening (39).

The GHS is a non-interventional study; participants with abnormal or borderline findings can unfortunately not be re-invited.

We thank all study participants for their willingness to make data available for this research project, and we thank all colleagues for their enthusiastic commitment. 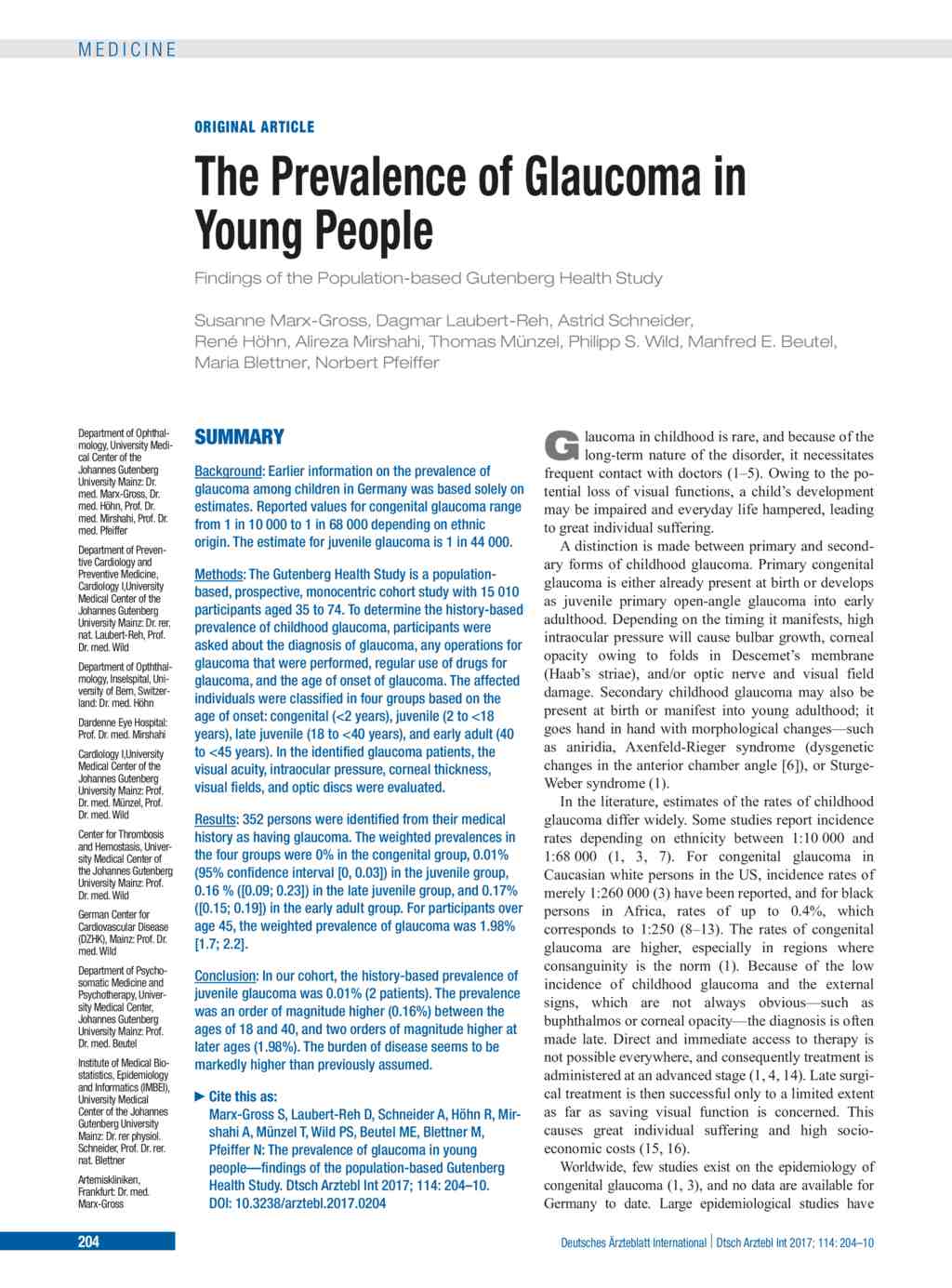