Background: In patients with chronic hepatitis C infection, a sustained virologic response (SVR) to interferon-based therapy markedly decreases the incidence of hepatocellular carcinoma (HCC) over the long term. This is also true for patients who have hepatic cirrhosis, as well as for those with HCC—with or without cirrhosis—who have undergone resection or ablation with curative intent. Recent publications, however, have reported a higher incidence of HCC among patients in both of these subgroups who were treated with direct antiviral agents (DAA) rather than interferon-based therapy.

Methods: A selective search for pertinent literature was carried out in the PubMed database with the search terms “direct-acting antiviral therapy” and “hepatocellular carcinoma.”

Results: In comparison to historical patient cohorts that received interferon-based therapy, patients with hepatic cirrhosis after SVR brought about by DAA have a higher incidence of de novo HCC in 12 months (5.2–7.4%). The recurrence rate after treatment for HCC with curative intent was also higher, with marked fluctuations. Patients treated with DAA were often older and in a more advanced stage of cirrhosis than those who had received interferon-based therapy; these factors may have contributed to the observed higher incidence of HCC. On the other hand, the reduction of inflammation-triggered immune surveillance after very rapid elimination of the hepatitis C virus may have favored tumor progression.

Conclusion: Before DAA therapy is initiated in a patient who has cirrhosis or has undergone treatment for HCC with curative intent, a de novo or recurrent HCC should be meticulously excluded. Even after SVR, these patients still need intensive follow-up and surveillance.

Hepatocellular carcinoma (HCC) is the second most common tumor-associated cause of death, with liver cirrhosis being the most important risk factor (1). The incidence of the disease is increasing, especially due to the spread of hepatitis C virus (HCV) infection. In 2012, the HCC incidence in Germany was 7.2 per 100 000 inhabitants for men, and 2.3 per 100 000 inhabitants for women (1). Inadequate monitoring of high-risk patients (in particular, patients with cirrhosis of the liver) contributes to the fact that only approximately 30% of cases diagnosed are still in a stage for which a curative treatment (such as resection, local ablation, or liver transplantation) is still available (2).

In the context of chronic HCV infection, the annual HCC incidence rises significantly with increasing fibrosis stage and is between 2% and 8% in untreated patients with liver cirrhosis (3). The risk of cirrhosis for HCV-positive patients is at least 10–20% within 20 years. Cofactors such as age at infection, the sex of the individual, and alcohol consumption are critical for this (4).

Consequently, HCV patients should be treated with antiviral therapy (secondary prevention) (5, 6). A sustained virological response (SVR) is associated with a marked reduction in the HCV-associated all-cause mortality, including the incidence of HCC (7). Meta-analyses of interferon (IFN) antiviral therapy show a risk reduction of HCC incidence of more than 70% as a result of an SVR (absolute risk reduction, 4.6%), irrespective of fibrosis stage (8). Patients with hepatic cirrhosis also show a significantly reduced incidence of HCC after SVR, yet a relevant residual risk remains (incidence <1.5%; 95% confidence interval [0.3, 2.4]) (9, 10), which is especially due to the persistence of liver cirrhosis (11). Therefore, it is still recommended that cirrhotic patients undergo long-term HCC surveillance despite SVR (12, 13).

Within 5 years after resection or local ablation, HCC relapse occurs in up to 70% of cases (14). Here, a distinction is made between an early relapse within the first two years (due to micrometastasized cancer cells at the time of treatment, or to incomplete tumor removal) and a late relapse (due to chronic hepatopathy/cirrhosis). Often an antiviral therapy is recommended as a tertiary prevention; meta-analyses have shown a 74% reduction in the risk of recurrence (absolute risk reduction: 43.4%) in these patients after SVR as a result of IFN antiviral therapy (9, 16).

Nonetheless, the use of IFN was limited even for patients with the same indication (chronic HCV infection) due to its side effects and contraindications (such as advanced liver cirrhosis, autoimmune diseases, and impairments of the central nervous system). In contrast, newer direct acting antivirals (DAA) now offer a well-tolerated and highly effective treatment option. Indeed, SVR rates of up to 90–95% are currently obtained, and this is independent of factors that were previously predictive, such as genotype, extent of liver damage, or prior treatment (17).

Overall, however, data on DAA therapy regarding the extent of secondary and tertiary HCC prevention are still insufficient (18). In the last years, several published studies have observed (often unexpectedly) de novo HCC in patients with liver cirrhosis after DAA therapy. This raises the question of whether the higher HCC incidence observed after SVR was achieved with DAA therapy as compared to IFN treatments will persist.

The highest HCC risk was observed in patients after HCC treatment with curative intent. Some publications have observed a frequent and often aggressive relapse following DAA therapy with SVR. Consecutively, a systematic investigation into this issue was commissioned by the European Medicines Agency (EMA) (19).

In light of the conflicting data, a selective literature search of the PubMed database was performed with the search terms „direct acting antiviral therapy“ and „hepatocellular carcinoma,“ on behalf of the German Alliance for Liver Cancer (GALC). All publications (full publications, letters to the editor) available up until 31 January 2017 were taken into account.

In a further study, 317 out of 406 patients with decompensated cirrhosis (17.2% with prior history of HCC) achieved SVR (78.1%) (23). The HCC incidence within the first 6 months was 4.2%, 3.5%, and 6.7% for patients who were untreated (retrospective cohort), who achieved SVR, or who did not achieve SVR, respectively. The authors concluded that, as compared to retrospective cohorts, the risk of HCC is not higher after DAA therapy.

Overall, the de novo HCC incidence after DAA therapy in cirrhotic patients (most of whom achieved SVR) is 3.2–3.5% (at 6-month follow-up) and 5.2–7.4% (at 12-month follow-up). These values are much higher than the annual incidence observed in patients after IFN-induced SVR (<1.5% in historical cohorts) (10).

HCC relapse in patients after HCC treatment with
curative intent

Yang et al. reported on 18 HCC patients who received DAA therapy (SVR: 50%) before liver transplantation (median waiting time: 11 months) (25). The relapse rate was 27.8% (with DAA therapy) and 9.5% (for 63 patients not treated with antiviral drugs) (P = 0.06).In the meantime, however, several publications have reported no observed increase in the HCC relapse rate. For 31 cirrhotic patients who achieved a CR following HCC treatment, a 3.2% HCC relapse rate was observed at 8 months following DAA therapy (SVR: 84%; median time between HCC treatment and onset of DAA therapy: 19.3 months) (26).

It is important to note that all reports were exclusively retrospective analyses of mostly uncontrolled and relatively small cohorts. Therefore, it cannot be ruled out that de novo or relapsed HCC was not detected in some patients due to insufficient monitoring or to insufficient follow-up care prior to DAA therapy, respectively, and that these cases were mistakenly associated with DAA therapy. This could also explain the rapid onset of some tumors shortly after the conclusion of DAA therapy (20, 24). Further, it should be taken into account that modern imaging techniques now make it possible to obtain an earlier reliable HCC diagnosis, which is reflected in the currently reported higher incidence rates. In this context, a possible lead time bias must also be noted. That is, the lead time is “falsified” through a seemingly prolonged survival time of patients due to advancing the time of diagnosis as compared to patients who received a diagnosis only after clinical symptoms appeared (if no effective therapy is available). Additionally, the fact that SVR is achieved more rapidly with DAA therapy (usually within 6 months) than with IFN therapy (usually by 15 months) makes it more possible to observe HCC relapse after SVR, especially with aggressive tumors that recur rapidly.

A key aspect, however, is the fact that there was a marked change in prescribing behavior with DAA therapy as compared to IFN therapy, which is mainly due to its significantly better side-effect profile. This leads to a significant inclusion bias, as treatment now includes older patients (median: 10 to 15 years older), patients with advanced liver cirrhosis (Child-Pugh class B / C), and patients with increased comorbidity treated with antiviral therapy (32, 33). The same is true for patients after HCC treatment with curative intent, as they can now be treated with antiviral therapy significantly earlier after the procedure (34). Further, these factors are already primarily associated with an increased risk of HCC (32, 33). These are relatively new findings that still require a sufficient level of statistical evidence. It should also be pointed out that most recent data have a limited follow-up period, and that almost no publications have direct compared DAA with IFN therapy.

Additionally, most publications lack essential data on the rate of SVR, severity of liver cirrhosis, and/or extent of monitoring / follow-up before and after DAA therapy. Some publications included patients with or without previous HCC in the analyses, while others listed transarterial chemoembolisation (TACE) as a treatment with curative intent. Large differences were also observed in times given for the interval between HCC treatment, the last documentation of CR, the start of DAA therapy, and the duration of follow-up.

DAA therapy and its associated high rates of SVR will lead to a significant reduction in HCC incidence in the long term, as patients can be treated before developing cirrhosis, thereby eliminating a critical risk factor for HCC development. In the current publications, however, higher rates of HCC incidence and relapse have been observed for patients with liver cirrhosis, and especially after HCC treatment with curative intent, in a historical comparison to IFN therapy. As mentioned above, these effects can be due to a considerable inclusion bias.

One of the main differences between IFN therapy and the new DAA therapy is the kinetics of virus elimination. The very rapid drop in virus load in the context of DAA therapy significantly reduces inflammation-triggered immunosurveillance (24, 35, 36). This could lead to accelerated tumor progression together with increased proliferative stimuli in the context of liver regeneration; neoangiogenesis could also possibly play a role in this context (37). Overall, it appears unlikely that the possibly lower HCC incidence after IFN therapy is due to a clinically relevant direct anti-proliferative effect of IFN, which has never been sufficiently demonstrated in prospective HCC studies (38).

In our opinion, DAA therapy does not lead to an initiation of hepatocarcinogenesis (that is, it has no direct carcinogenic effect); if anything, it could lead to accelerated and/or more aggressive progression, and thereby to an (earlier) manifestation of latent tumors or to recurrence.

Due to the lack of controlled studies, there are currently no restrictions on DAA therapy for patients with cirrhosis without HCC in their medical history or after HCC treatment with curative intent, as long as the following recommendations are observed:

A careful long-term analysis of the patients treated to date, and a subsequent evaluation of the „real life“ register, are necessary. It may be possible to identify a subgroup of patients who do not benefit from DAA therapy with regard to HCC risk, analogous to patients with advanced cirrhosis of the liver (40), or who require closer monitoring.

The use of DAA therapy together with a palliative therapy using TACE or in combination with a targeted drug therapy or immunotherapy could also be investigated prospectively.

Irrespective of its outcome, the current discussion provides further evidence that antiviral therapy should be performed before the onset of advanced liver fibrosis, as this makes it possible to eliminate a critical risk factor for the development of HCC. Nonetheless, this recommendation contradicts the prioritization policies of many health systems.

Prof. Schirmacher and Prof. Vogel declare that no conflict of interest exists. 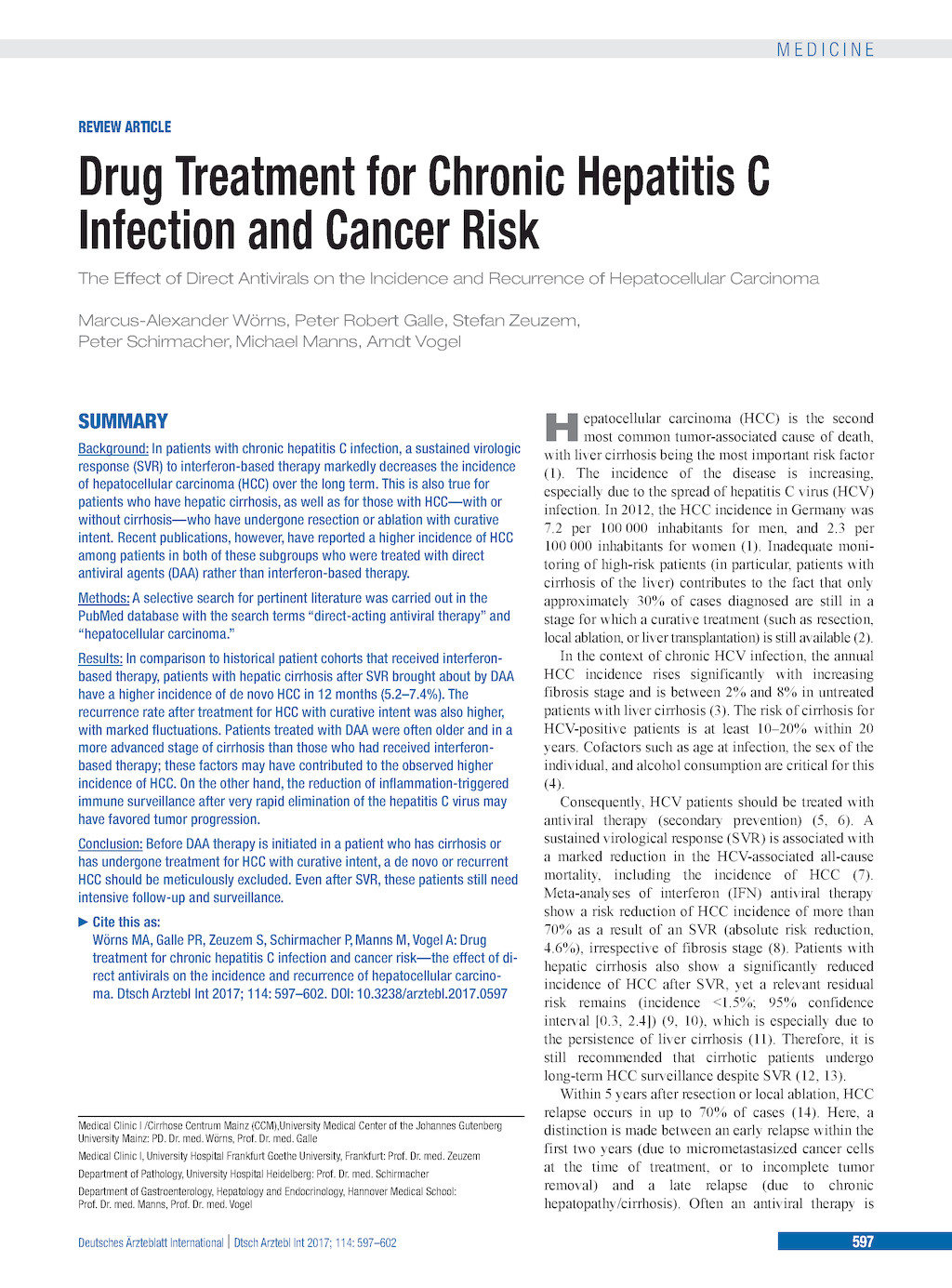