We are pleased with the high level of interest in our review (1).

The comments from Krüger highlight that, despite all the evidence for a dramatic decline of rheumatic fever in the developed world, one should not forget that there is a higher prevalence in other regions and that an increase of such problems in Germany due to further refugee flows is possible.

We appreciate the contribution of Herdegen and Zingler who stress the possibility of a cardioprotective effect of nonsteroidal anti-inflammatory drugs (NSAIDs). We explicitly point out in our review that “two independently conducted studies with AS patients […] showed that not the intake of high NSAID doses, but of low doses, was associated with increased mortality.” Further, we state that “these results indicate that there may also be beneficial effects of NSAIDs that should be taken into account […] in patients with chronic inflammatory disease.” Nevertheless, there is also currently an increasing body of evidence that would suggest caution when using NSAIDs (2). That NSAIDs are the first-choice treatment for patients with axial spondyloarthritis, and that the risk of cardiovascular events is indeed significantly lower in young patients not affected by other risk factors, was also stated.

Meyer criticizes our findings: “In patients with RA, statins reduce mortality by 20% (e18).” He prefers a calculation of the absolute risk reduction rather than the relative risk reduction, as the effects are less impressive. This has advantages and disadvantages; both are correct. Overall, we absolutely do not recommend treating all RA patients with statins.

It should be stressed at this point that the evidence for the cardioprotective effect of statins is increasingly stable for the entire population. This applies to both primary and secondary prevention (3). The (cardiovascular) mortality of RA patients is clearly increased—with persistent inflammatory activity as the driving force. Classical risk factors for atherosclerosis, such as hypercholesterolaemia, are associated with this increase (4). These occur twice as frequently in RA patients as in the normal population. Not taking into account known risk factors leads to an increased incidence of myocardial infarction. For management of RA, it is important that statins not only have a favorable effect on lipid metabolism but also are anti-inflammatory (5).

Patients with RA should be regularly evaluated for risk factors and symptoms of cardiovascular disease and be treated adequately and consequently.

Prof. Braun has received fees for a publication related to the topic. 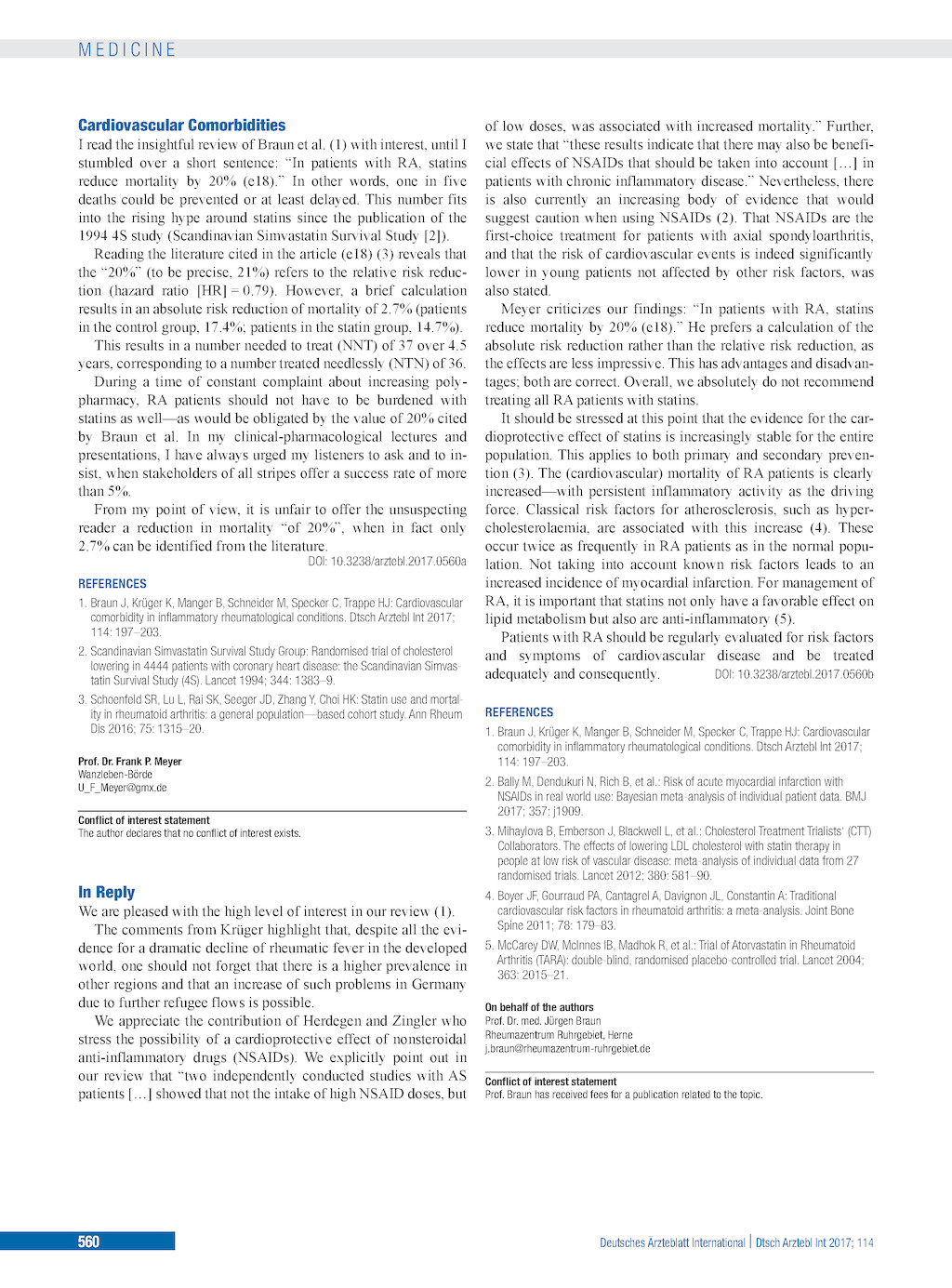